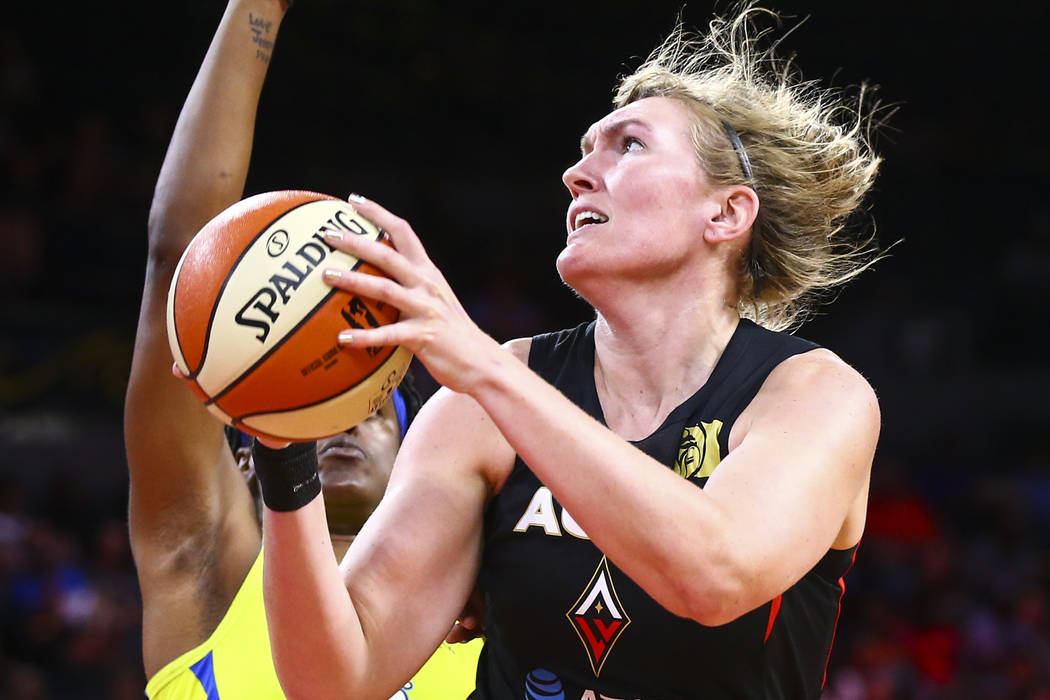 Las Vegas Aces' Carolyn Swords goes to the basket against Dallas Wings' Kaela Davis during the second half of a WNBA basketball game at the Mandalay Bay Events Center in Las Vegas on Tuesday, July 30, 2019. (Chase Stevens/Las Vegas Review-Journal) @csstevensphoto

Aces center Carolyn Swords’s professional basketball career is over, but her business career is just beginning.

Swords is retiring after eight WNBA seasons and joining the Aces’ business staff as a marketing specialist beginning Monday. She’ll help the franchise with various marketing and promotional initiatives and work alongside its other departments — including media relations, social media, graphic design and corporate partnerships.

The 30-year-old from Sudbury, Massachusetts, played for the Chicago Sky, New York Liberty and Seattle Storm before concluding her career with two seasons in Las Vegas.

She finishes with averages of 3.8 points and 3.1 rebounds, and friends around the world.

“It felt like the right time and a great opportunity to stay connected to basketball, especially the Aces,” said Swords, who decided shortly after the 2019 season to retire. “The opportunity to play at the highest level is so wonderful. I’m proud to have gotten to this level and play the best in the world.”

Swords was drafted in the second round of the 2011 WNBA draft by the Sky after four seasons at Boston College. She signed with the Aces as a free agent before the 2018 season and started 16 games in two years with the team.

She interned with the franchise’s business operations between the 2018 and 2019 seasons and said the experience was so positive that it played a role in her decision to retire. She also served as the team’s representative in the players association and helped negotiate the league’s new collective bargaining agreement.