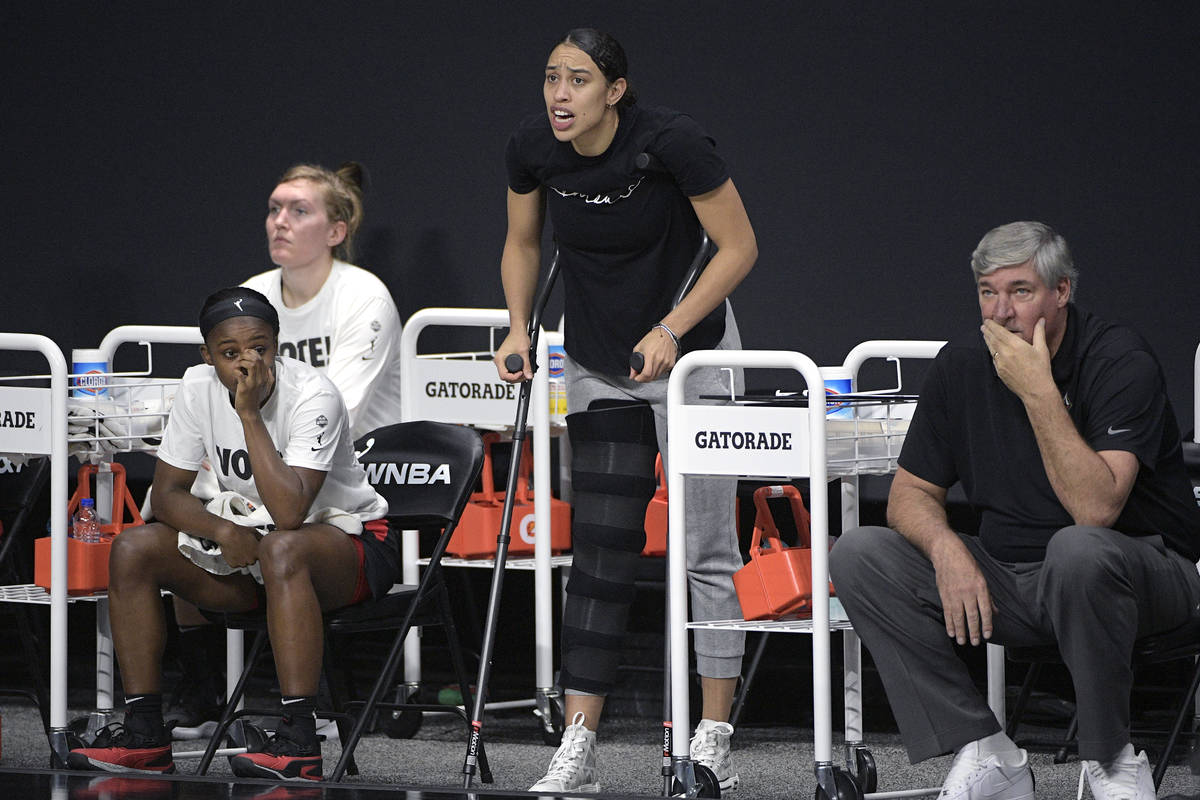 Las Vegas Aces forward Dearica Hamby, center, calls out words of encouragement from the bench area during the first half of Game 5 of a WNBA basketball semifinal round playoff series against the Connecticut Sun, Tuesday, Sept. 29, 2020, in Bradenton, Fla. (AP Photo/Phelan M. Ebenhack)

The knee injury could have been far worse for Dearica Hamby.

She could have needed surgery. She could have been looking at many months of rehabilitation and being sidelined when the Aces opened training camp Sunday and perhaps into the season.

The physical part of the injury wasn’t so bad. It was the emotional part that was difficult because Hamby partially tore the MCL in her right knee in the semifinals of last season’s WNBA playoff semifinals.

The Aces eliminated the Connecticut Sun even without Hamby, but her absence was particularly felt in the finals against the Seattle Storm, which won in a three-game sweep.

“(The injury) didn’t hit me until the way the finals played out,” Hamby said. “Just knowing what could’ve happened had I played, I think our team looked a lot different with me on the floor, especially against Seattle. So that was difficult, but some things are out of your control, and I had to let it go and move on.”

Coach Bill Laimbeer said he has not placed physical restrictions on Hamby in her return.

With Hamby back — as well as starters Liz Cambage (COVID-19 opt-out) and Kelsey Plum (torn Achilles tendon), who both didn’t play last season — the Aces have the talent to make up the difference from last year’s finals and win it all.

Neither Hamby, 27, nor Laimbeer shied away from such expectations when meeting with the media.

“We can do so many different things with this roster on the floor,” Hamby said. “I think one through 12, we’re going to have the most dangerous team.”

Hamby, a 6-foot-3-inch forward, has the ability to play on the wing or in the post. She has spent most of her six-year Aces career at power forward, but expects to play more small forward this season and has worked on her midrange jumper.

“I believe if Dearica Hamby gets on the floor, it will be a big accomplishment,” Laimbeer said tongue-in-cheek to her.

Point might be a stretch, but Hamby successfully has handled whatever Laimbeer has thrown her way. She was the WNBA Sixth Woman of the Year each of the past two seasons, scoring in double figures a combined 39 times.

That production earned her a contract extension during the offseason that takes Hamby through 2022.

“She’s got a long way to go to be an unbelievable player,” Laimbeer said. “She’s obviously a great player as it is, but if she continues to work on her game, she’ll get there.”