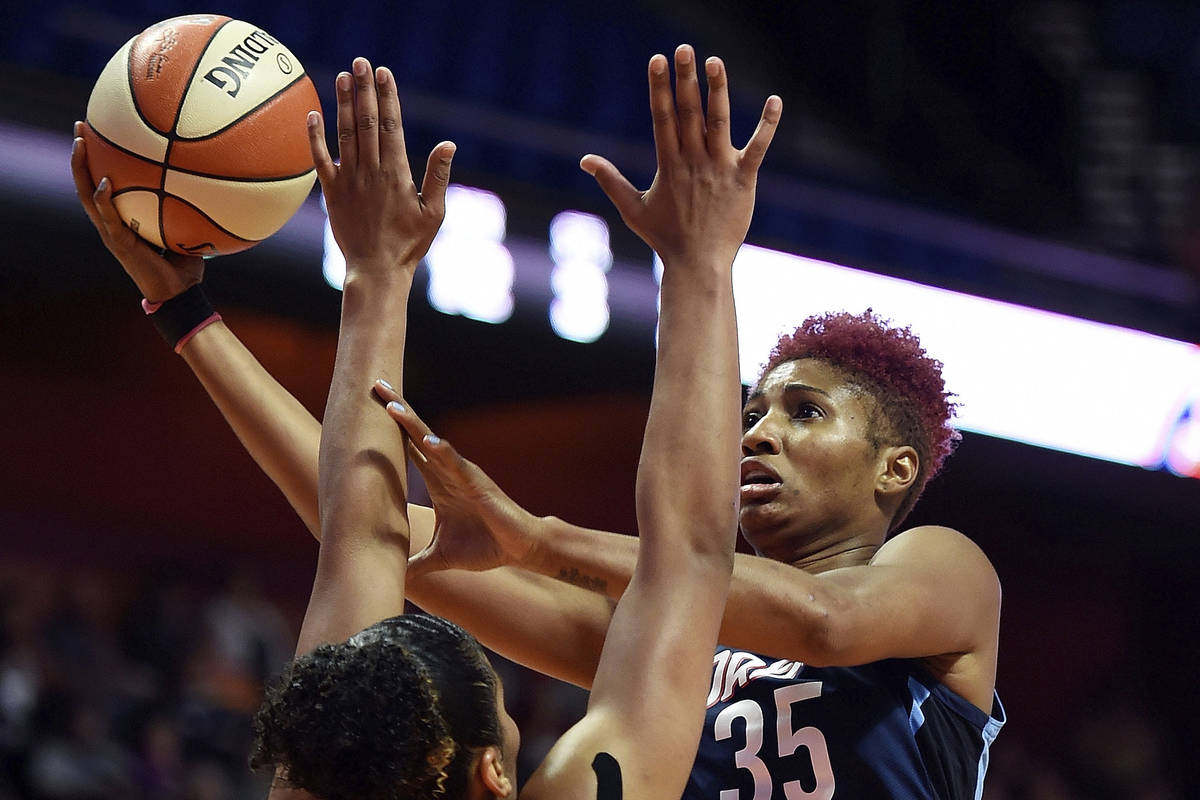 Atlanta Dream forward Angel McCoughtry shoots over Connecticut Sun forward Alyssa Thomas during the first half of a WNBA basketball game, in Uncasville, Conn. on July 17, 2018. McCoughtry, a two-time WNBA scoring champion, is testing free agency for the first time in her career. (Sean D. Elliot/The Day via AP, File)

In the two seasons Las Vegas has been part of the WNBA, it has watched its Aces climb through the league’s ranks.

The San Antonio Stars moved to Las Vegas and became the Aces in 2018. In the franchise’s final season in San Antonio, the Stars won eight games in the 34-game regular season. In the first season in the valley, that increased to 14. Last year the Aces took another leap by winning 21 games and reaching the playoffs for the first time since 2014.

Las Vegas dropped a WNBA semifinal best-of-five series to eventual champion Washington, but it was clear that with a strong offseason the pieces were in place to make a run at at WNBA title.

Those hopes were only enhanced in February when the Aces signed Angel McCoughtry, a player president of basketball operations Bill Laimbeer said was the team’s “primary target” in free agency.

McCoughtry has been one of the league’s best players since Atlanta drafted her with the No. 1 overall pick. She’s fifth all-time, averaging 19.1 points per game, and second in league history with 2.09 steals per game.

She’s the type of two-way player that any team would covet, especially one with title aspirations. Her signing gave the Aces four No. 1 overall picks on the roster, alongside guard Kelsey Plum (2017), forward A’ja Wilson (2018) and guard Jackie Young (2019).

None of that is an issue for Laimbeer, the Aces coach who is known for being about as “real” as it gets. He’s also led teams to three WNBA championships, and it appeared the Aces were putting together a championship roster to pair with him.

But it’s not always that easy.

In June, Plum tore an Achilles tendon and was lost for the season. Then, right before training camp started, the Aces’ star center Liz Cambage opted out of playing this year in the bubble in Bradenton, Florida, because of health concerns.

“I thought we had the squad that everybody was looking at to be a solid contender for the championship,” Laimbeer said. “Our fans were, our city was, I know I was, and then as we all know the world fell apart, not just in basketball and our team, but everything became so topsy-turvy, you just don’t know what to do.”

The Aces brought in what they thought would be a quality replacement after Plum’s injury in one-time all-star Alex Bentley. But Bentley was one of several Aces who battled injuries throughout training camp and was waived by the team Wednesday, another unfortunate example of the one-step-forward, one-step-back type of offseason the Aces had.

There was no way for Las Vegas to replace Cambage. After all, extraordinarily talented 6-foot-8-inch centers aren’t all that easy to find.

The Aces haven’t given up on the season before it starts, but they admit that expectations have shifted a bit.

“For me, (success) isn’t wins and losses,” Laimbeer said. “If it happens, wonderful. We built our team for this year, and now we’ve lost Kelsey Plum, we’ve lost Liz Cambage. We’ve lost our great homecourt advantage, so I think success right now is building for the future. This might still happen for us this year, but I think success is bonding as a group and believing in each other as players and coaches.”