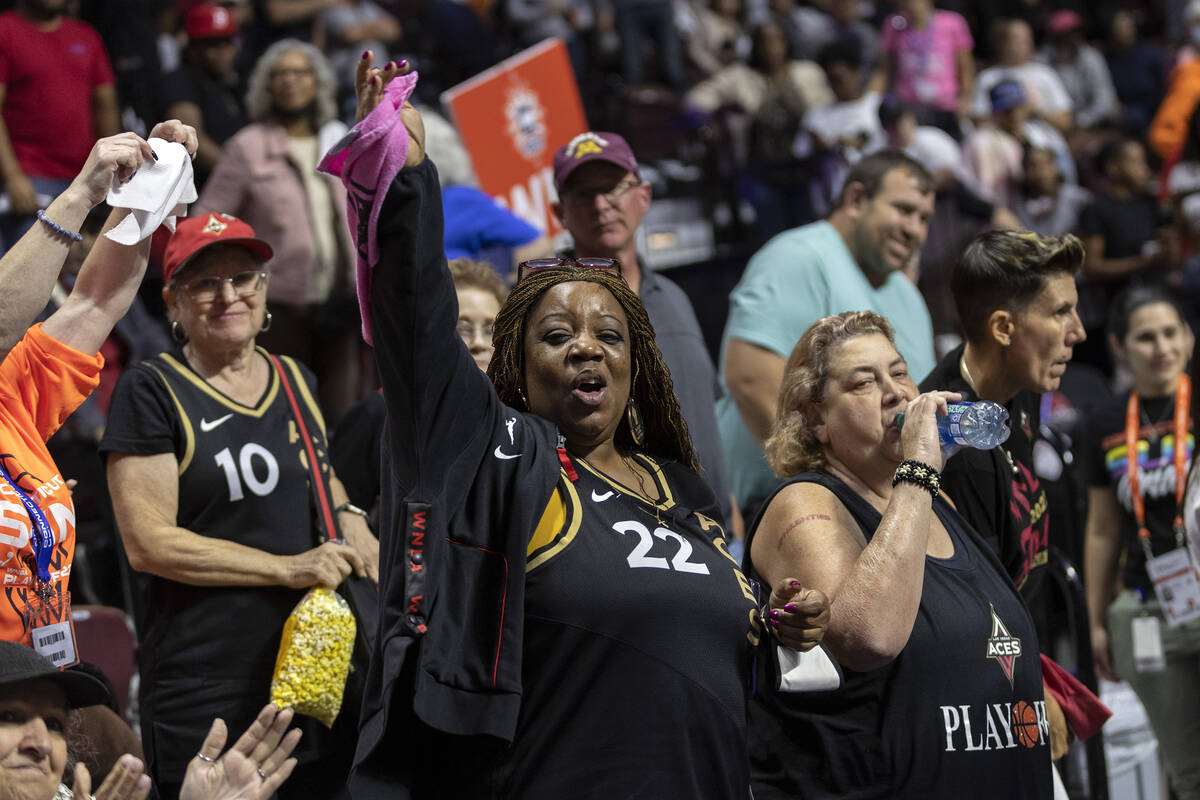 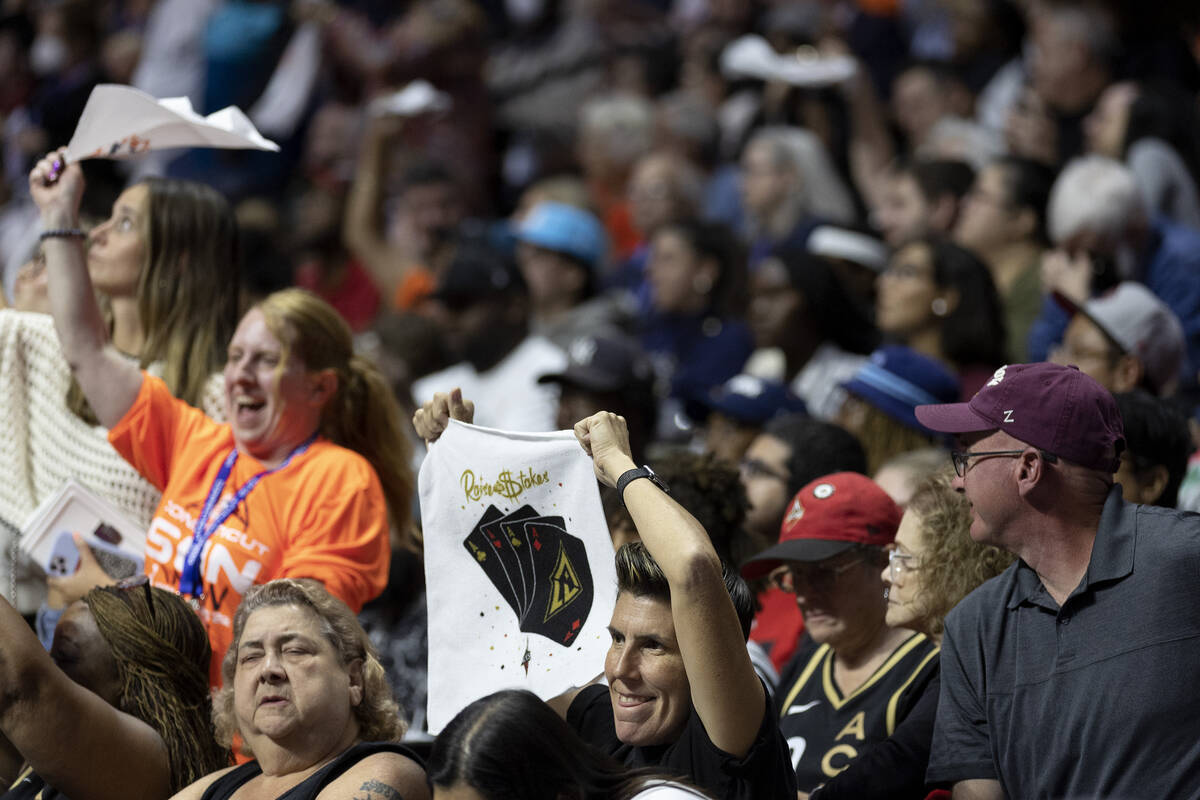 Las Vegas Aces fans cheer among a crowd of majority Connecticut Sun fans during the second half in Game 3 of a WNBA basketball final series at Mohegan Sun Arena on Thursday, Sept. 15, 2022, in Uncasville, Conneticut. (Ellen Schmidt/Las Vegas Review-Journal) @ellenschmidttt 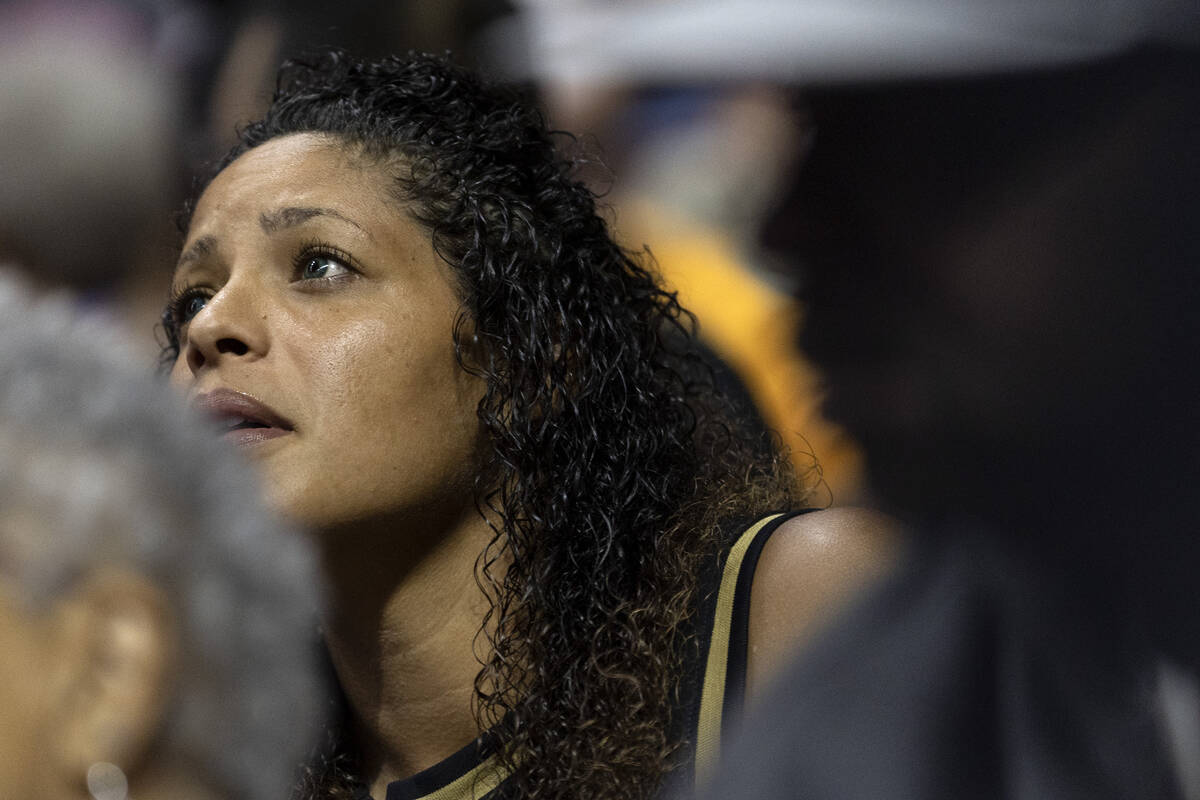 A Las Vegas Aces fan looks toward the scoreboard during the second half in Game 3 of a WNBA basketball final series against the Connecticut Sun at Mohegan Sun Arena on Thursday, Sept. 15, 2022, in Uncasville, Conneticut. (Ellen Schmidt/Las Vegas Review-Journal) @ellenschmidttt 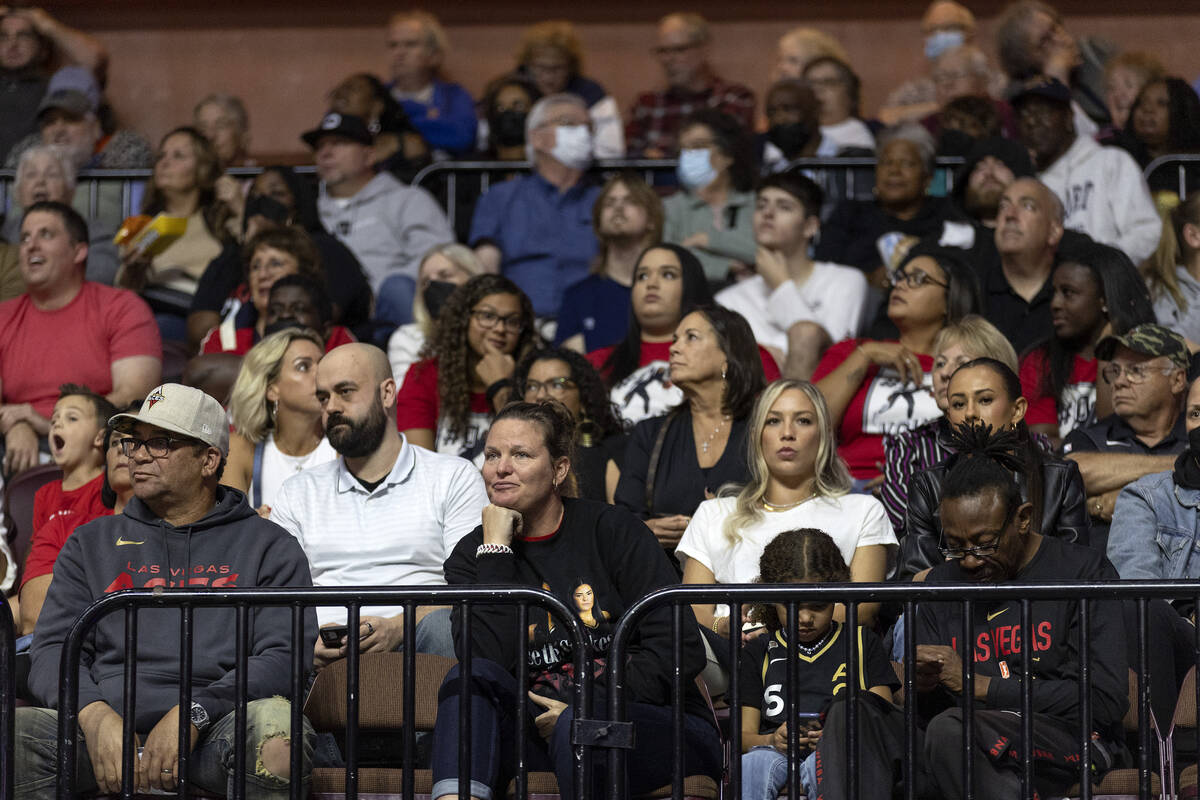 A group of Las Vegas Aces fans expresses disappointment during the final minutes in Game 3 of a WNBA basketball final series against the Connecticut Sun at Mohegan Sun Arena on Thursday, Sept. 15, 2022, in Uncasville, Conneticut. (Ellen Schmidt/Las Vegas Review-Journal) @ellenschmidttt 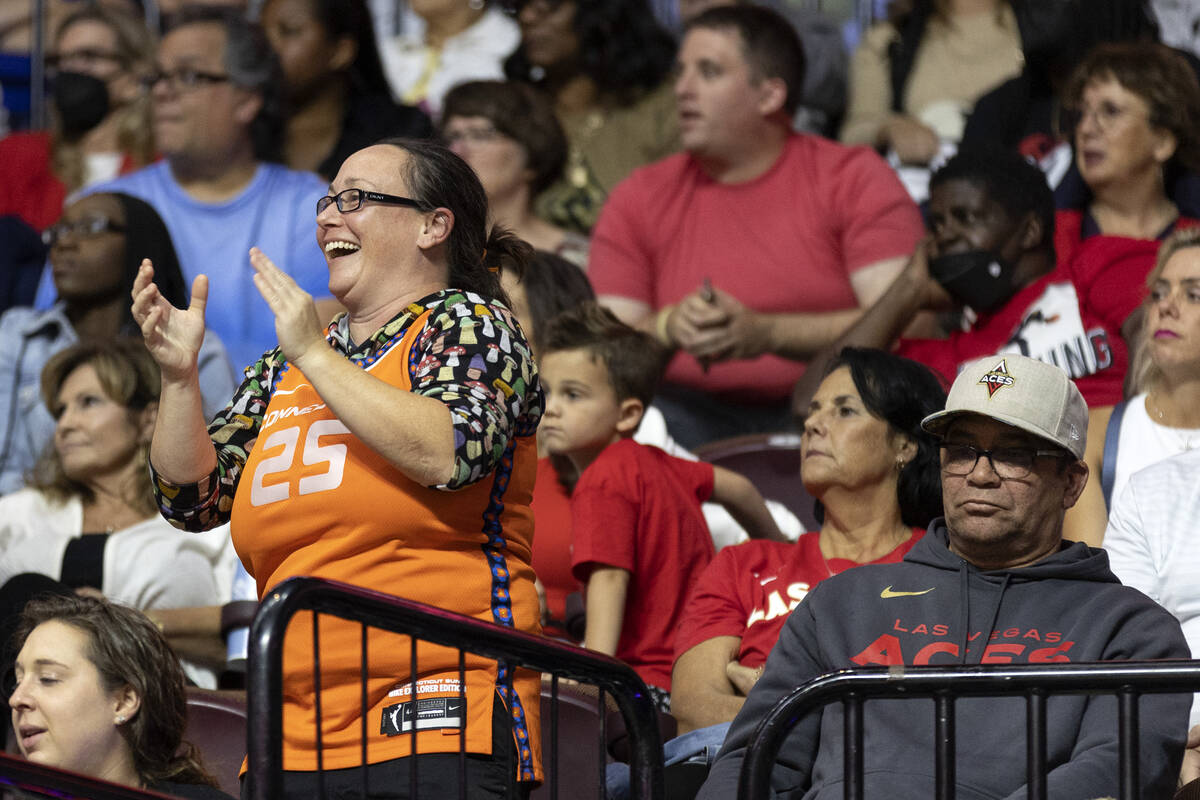 A Connecticut Sun fan cheers while a Las Vegas Aces fan frowns during the second half in Game 3 of a WNBA basketball final series at Mohegan Sun Arena on Thursday, Sept. 15, 2022, in Uncasville, Conneticut. (Ellen Schmidt/Las Vegas Review-Journal) @ellenschmidttt

Seated in Section 18 of Mohegan Sun Arena, Reyes dons the three-carat ring, featuring a pear-shaped central diamond, a 2D halo and a 3D band on her left hand.

A Las Vegas native, Reyes received the ring Sept. 28, 2021, when her husband, Armand Reyes, proposed at half court during an Aces’ playoff game. Now, Reyes and her family have made the 2,647-mile trek to Uncasville so they can potentially celebrate with the Aces.

“They were there when she got her ring, so we’re going to be here when they get their ring,” Armand Reyes said.

Going to road games always has been a part of the fan experience, and WNBA fans are no different. The Reyes family — Kris, Armand and their 5-year-old daughter, Aubrey — are some of the Aces’ fans who traveled to Connecticut for Games 3 and 4 in the WNBA Finals.

The Aces and Sun will play Game 4 at 1 p.m. Sunday. The Aces, coming off a 105-76 loss, lead the best-of-five series 2-1 and can clinch the first title in franchise history.

It wasn’t an easy journey for the Reyes family. They took a red-eye flight from Las Vegas and landed in Hartford, Connecticut, about 6:30 a.m. before making the hour drive to Uncasville.

But Kris and Armand said it was worth the time because it gave their daughter a memorable experience.

Both parents are longtime basketball fans, and they’ve tried to expose Aubrey to the sport as early as possible. They believe bringing her to WNBA games gives her role models and expands her horizons.

“They’re paving their own way in this world, making the necessary changes we believe in and want to showcase to our daughter,” Kris Reyes said. “The WNBA overall is so important.”

The Reyes family was joined by other Aces fans.

Tina Torres has been an Aces season ticket holder since the team relocated to Las Vegas from San Antonio in 2018. She has seen the team’s development from basement dwellers to perennial contenders. She also has witnessed the fan base grow.

“Hopefully they get the parade they deserve (if the Aces win the title),” Torres said. “They’ve worked so hard for this all year.”

Not all Aces fans who attended Game 3 live in Las Vegas. Rebecca Reed doesn’t have geographical allegiances to the team, but is a fan of South Carolina. After former Gamecock A’ja Wilson was drafted by the franchise in 2018, Reed began rooting for the Aces. The team’s style of play and energy appealed to her.

She never has been to Michelob Ultra Arena — it’s a bucket-list item — but relished walking into Mohegan Sun Arena as an opposing fan.

Similarly, Raul Santana has no ties to Las Vegas. He works at the Mohegan Sun’s surveillance department and has season tickets to the Sun with his wife. But he’s a longtime fan of Aces coach Becky Hammon and was rooting for Connecticut in the semifinals because he knew they would get to host the Aces at least once.