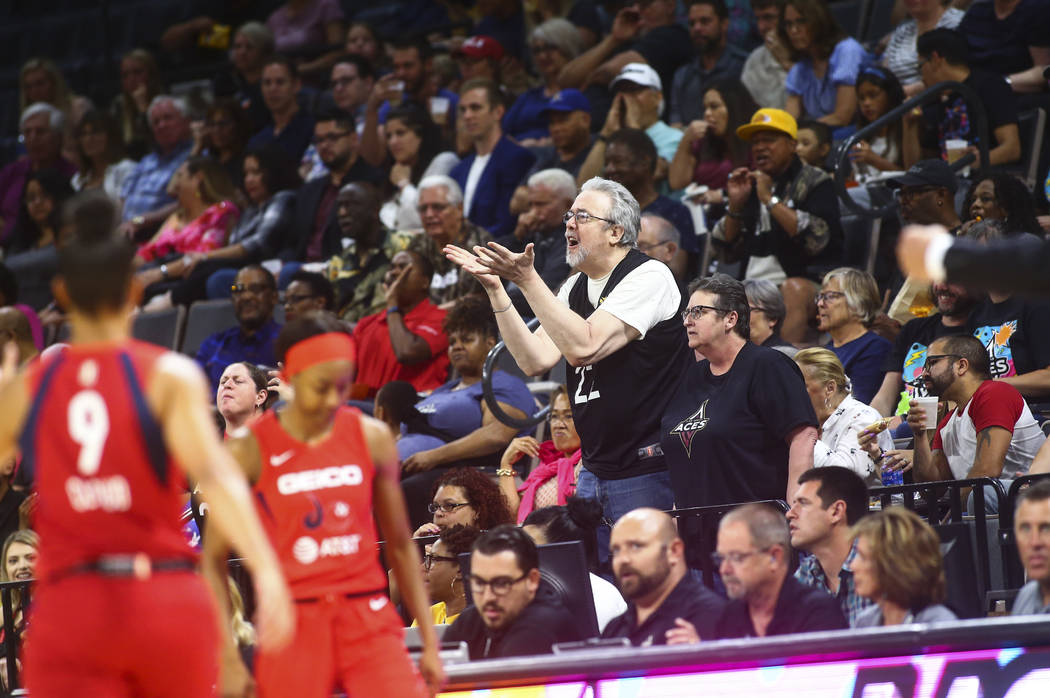 Las Vegas Aces fans react to a call during the first half of a WNBA basketball game against the Washington Mystics at the Mandalay Bay Events Center in Las Vegas on Thursday, June 20, 2019. (Chase Stevens/Las Vegas Review-Journal) @csstevensphoto 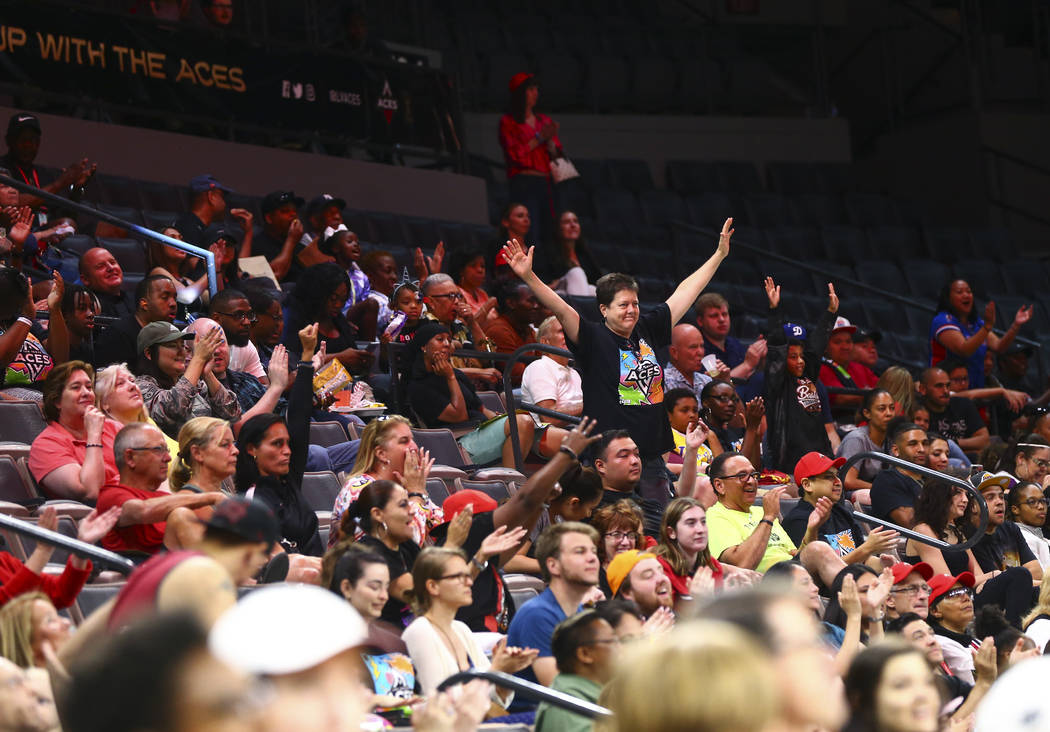 Las Vegas Aces fans cheer during the first half of a WNBA basketball game against the Washington Mystics at the Mandalay Bay Events Center in Las Vegas on Thursday, June 20, 2019. (Chase Stevens/Las Vegas Review-Journal) @csstevensphoto 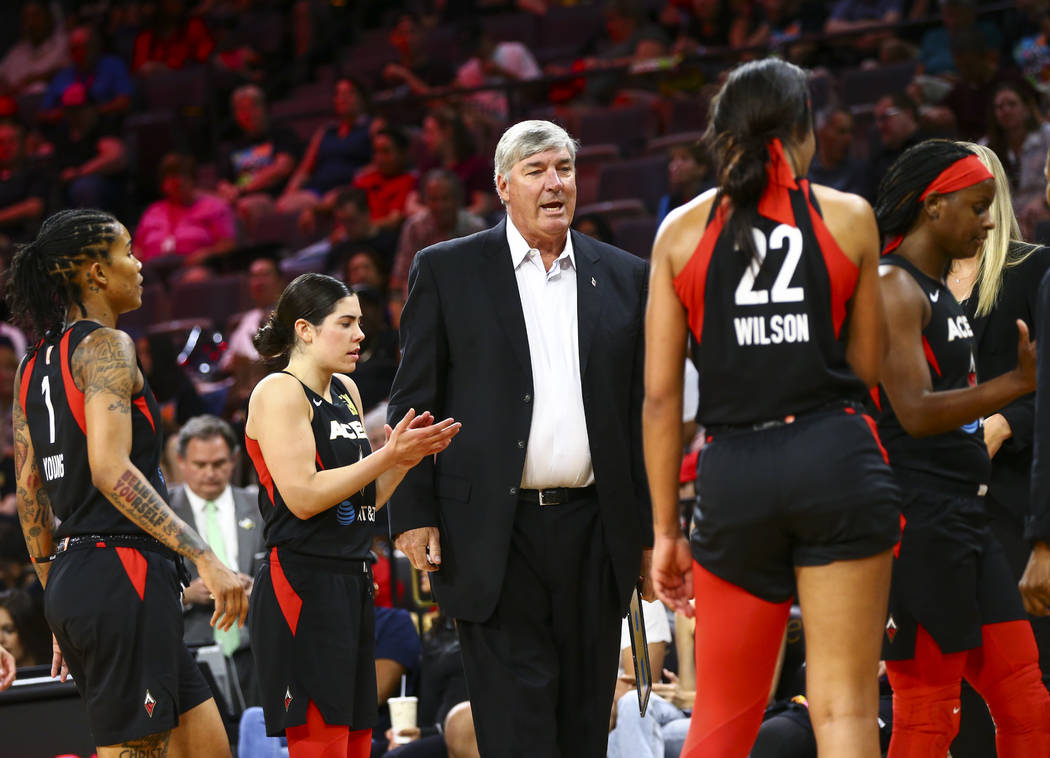 Announced home attendance is down for the Aces this season.

But the franchise is optimistic about the future amid what team officials say is an increase in turnstile attendance.

After 12 home games, the Aces’ average announced attendance is 4,459 at Mandalay Bay Events Center, third lowest of the 12 WNBA teams and a 16 percent decrease from last season’s average of 5,317 during the team’s first year in Las Vegas.

Actual attendance, however, is up, according to Aces assistant general manager Christine Monjer, who oversees the team’s business operations.

“People who are purchasing tickets are coming to games. They want to be here,” she said. “That’s where the difference comes from. … (But) apples to apples, yeah, we’re down.”

The Aces declined to disclose actual attendance numbers for 2018 or this season.

The league includes all tickets distributed in attendance figures — regardless if the ticket was redeemed or used at a game. The Aces stopped distributing excess tickets that they knew wouldn’t be used and have been more selective about promotional offers this season, Monjer said.

“We don’t do a lot of free tickets. We don’t do a lot of discounting. It has to be very purposeful,” said Monjer, adding that she prioritizes legitimate revenue over the optics of a full arena. “From a turnstile perspective, I think short of maybe one game, we’ve been higher every single game than we were last year.”

The Aces are 15-8 and playing for a top-two seed in the WNBA playoffs and double bye into the semifinals. They open a three-game homestand Friday against the Chicago Sky and conclude their home schedule with two games in late August.

Coach Bill Laimbeer said he doesn’t necessarily expect an uptick in attendance during the final stretch, despite two recent promotional offers, but added that he’s pleased with the atmosphere created by the typical home crowd.

Spectators tend to stay the entire game — regardless of the score — and have been rather ebullient for the better part of two seasons.

Phil Cory was one of about 200 season-ticket holders to attend an open practice Thursday at Mandalay Bay Events Center. The 45-year-old from Oklahoma hadn’t watched the WNBA in more than 20 years but was intrigued by the franchise’s relocation and purchased tickets behind the visiting bench for both seasons.

His plans were to attend a handful of games and flip the rest of his tickets on the secondary market, but he changed course after attending the home opener last season and doesn’t miss a game.

“It’s so much more intimate than some of the other sports out there,” said Cory, who moved to Las Vegas in 2011. “I think it’s growing. … It’s not about today. It’s not about next year. It’s about the future of the game.”