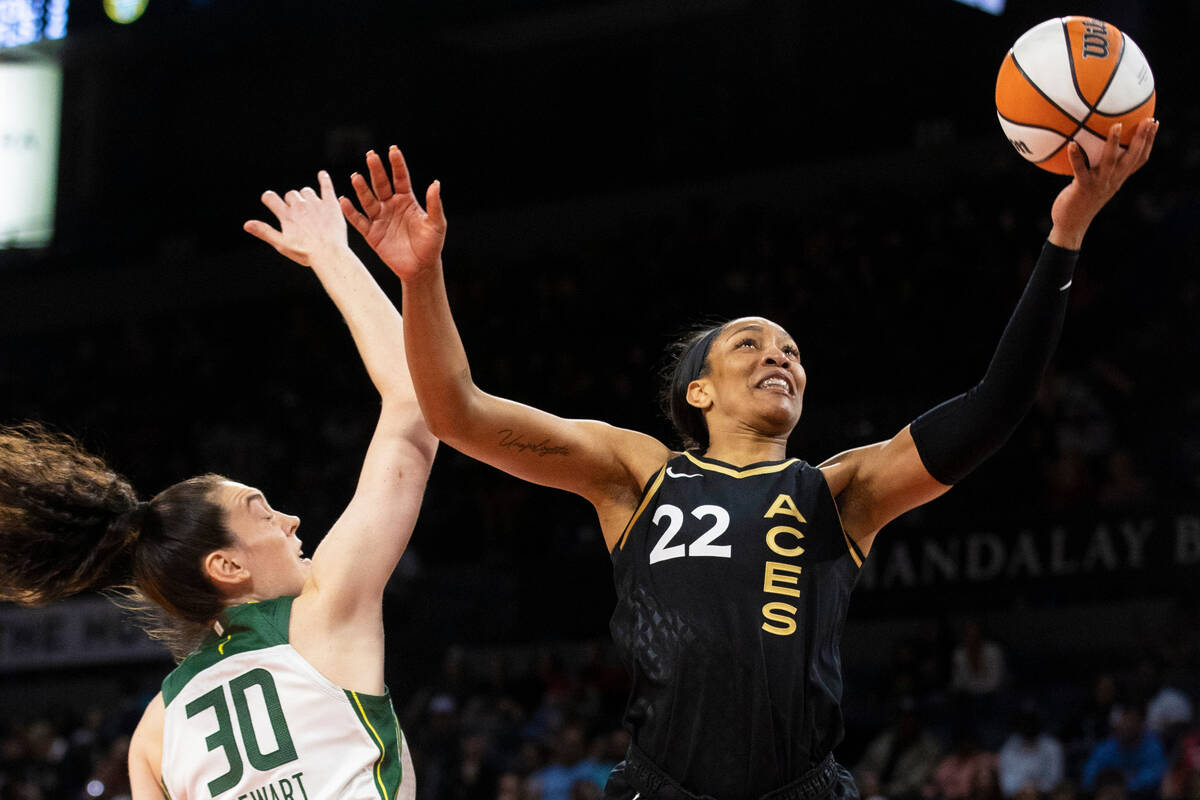 Three wins will determine who advances between the No. 1-seeded Aces and the No. 4 Seattle Storm. As both teams prepare for Game 1 of the best-of-five WNBA semifinals Sunday, the teams look remarkably similar.

Both boast a generational, MVP-caliber forward. Both have young coaches looking to make an impact early in their tenures. Both have elite perimeter players who can change a game with a single shot.

Here are some of the places where the WNBA semifinals may be won or lost.

It’s hard to imagine the WNBA without Sue Bird. The 41-year-old, who’s played 19 seasons across 21 years — all in Seattle — will retire at the end of the season with one of the greatest resumes in league history.

Bird turned back the clock against the Washington Mystics in the first round with a vintage 18-point, 10-assist performance in Game 2 to help Seattle sweep the series.

The Aces may be one of the few teams in the league who can boast a comparable floor general. Eighth-year point guard Chelsea Gray has been one of the WNBA’s best players since the All-Star break.

The Aces’ offense runs best through Gray, whose 6.1 assists ranked fourth in the WNBA this season.

The Storm’s Jewell Loyd had another solid season, averaging 16.3 points. However, the former Notre Dame guard can be inconsistent, something the Aces experienced firsthand.

They held the Olympic gold medalist to one point on 0-of-6 shooting in 30 minutes in Seattle Aug. 7, then watched Loyd explode for 38 points a week later in Las Vegas. Both games were Aces wins, but Loyd’s ability to shoot and score makes her one of the most dangerous guards in the league.

While Loyd continued to perform at a high level this season, the Aces saw the emergence of fifth-year guard Kelsey Plum. The reigning sixth player of the year was inserted into the starting lineup and scored 20.2 points per game, second in the WNBA. She’s also averaging a career-best 5.1 assists per game.

Ahead of the 2022 season, the Storm swung a trade with the Los Angeles Sparks for fourth-year wing Gabby Williams. The Sparks, Nevada, native has been a perfect fit for Seattle. She has become the lynchpin of one of the best defenses in the league.

Fourth-year wing Jackie Young has also enjoyed a breakout season. She has provided another scoring option for the Aces, especially with her improved 3-point shot. She averaged 15.9 points per game and shot 43.1 percent from 3, third-best in the WNBA.

But Aces coach Becky Hammon values Young’s defense more than anything else. The former No. 1 pick has repeatedly taken on the opposing team’s biggest perimeter scoring threat.

Breanna Stewart is one of the best players in this league. The 2022 scoring champion and 2018 MVP averaged 21.8 points per game and is one of the frontrunners for the 2022 MVP.

The Aces also have a frontrunner for MVP at power forward. A’ja Wilson is the focal point of this Aces team. She’s averaging 19.5 points and 9.4 rebounds per game, while also showing off a previously dormant 3-point shot. The 2020 MVP also led the league with 1.94 blocks per game this season.

Few teams get a chance to add the league’s reigning scoring champion midseason, but that’s what Seattle did when it signed veteran center Tina Charles in late June. Fresh off a contract divorce with the Phoenix Mercury, Charles has provided the offense Seattle was missing early in the season, averaging 14.8 points.

Coincidentally, the Aug. 7 game between the Storm and Aces was also the first time center Kiah Stokes started for Hammon. The Aces haven’t lost since Stokes was added to the starting lineup, and she fits well with the other starters.

Neither team has a particularly strong bench, but the Aces have been light on reserves since the start of the season.

Hammon has stuck with a short, seven-player rotation in the playoffs. Veteran guard Riquna Williams and rookie forward Iliana Rupert are the only trusted members of the reserve unit. The Aces will miss injured forward Dearica Hamby in this series because she was the Aces’ primary defender for Stewart.

Storm coach Noelle Quinn has a bit more depth. Australian center Ezi Magbegor finished second in the WNBA in blocks per game behind Wilson, veteran guard Epiphanny Prince and Australian wing Stephanie Talbot can be efficient outside shooters and Briann January is capable of running the show behind Bird.

Hammon, named 2022 WNBA Coach of the Year, is trying to take the Aces to the next level. With her perimeter-oriented offense, the Aces scored the most points per game of any team in the league during the regular season on efficient shooting and few turnovers.

Quinn took over the Storm in 2021 after Dan Hughes, who led Seattle to the 2018 championship, stepped down midway through the season. Quinn’s first season was then derailed by an injury to Stewart. This season, the Storm have been one of the premier defensive teams in the league. They were third in opponent points per game and first in opponent 3-point percentage.