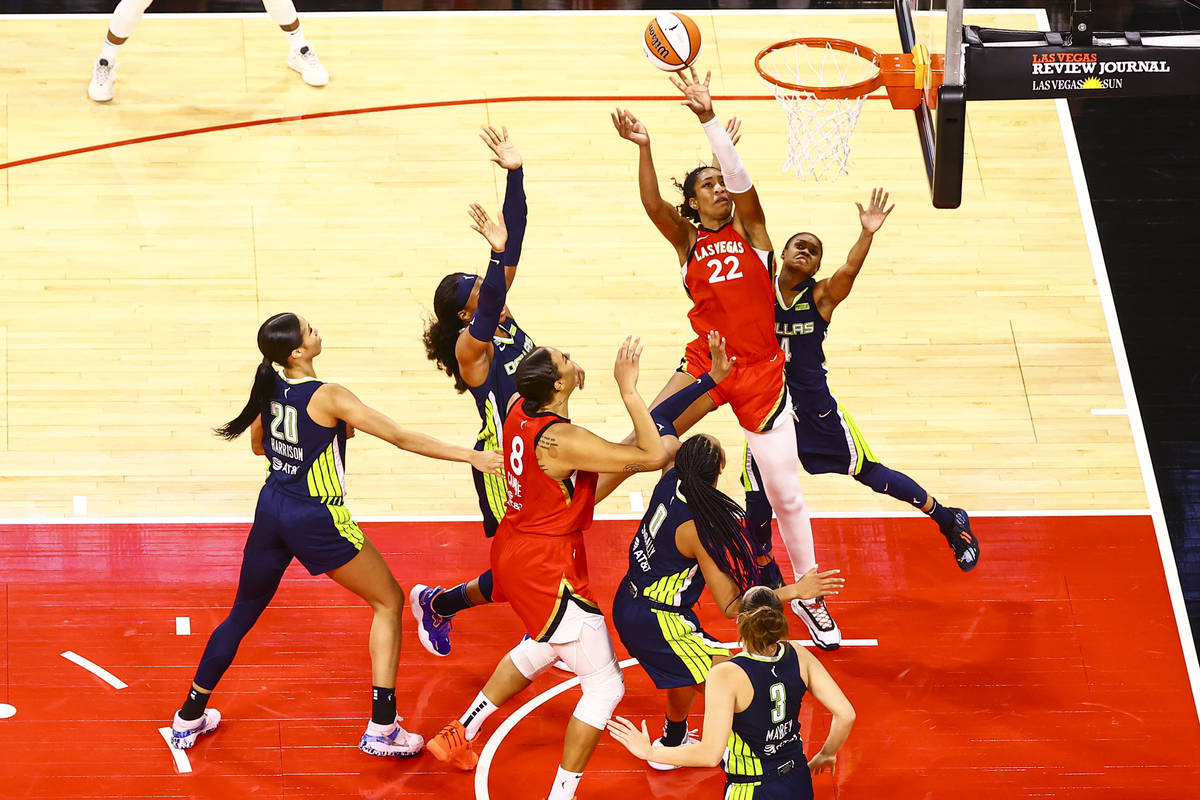 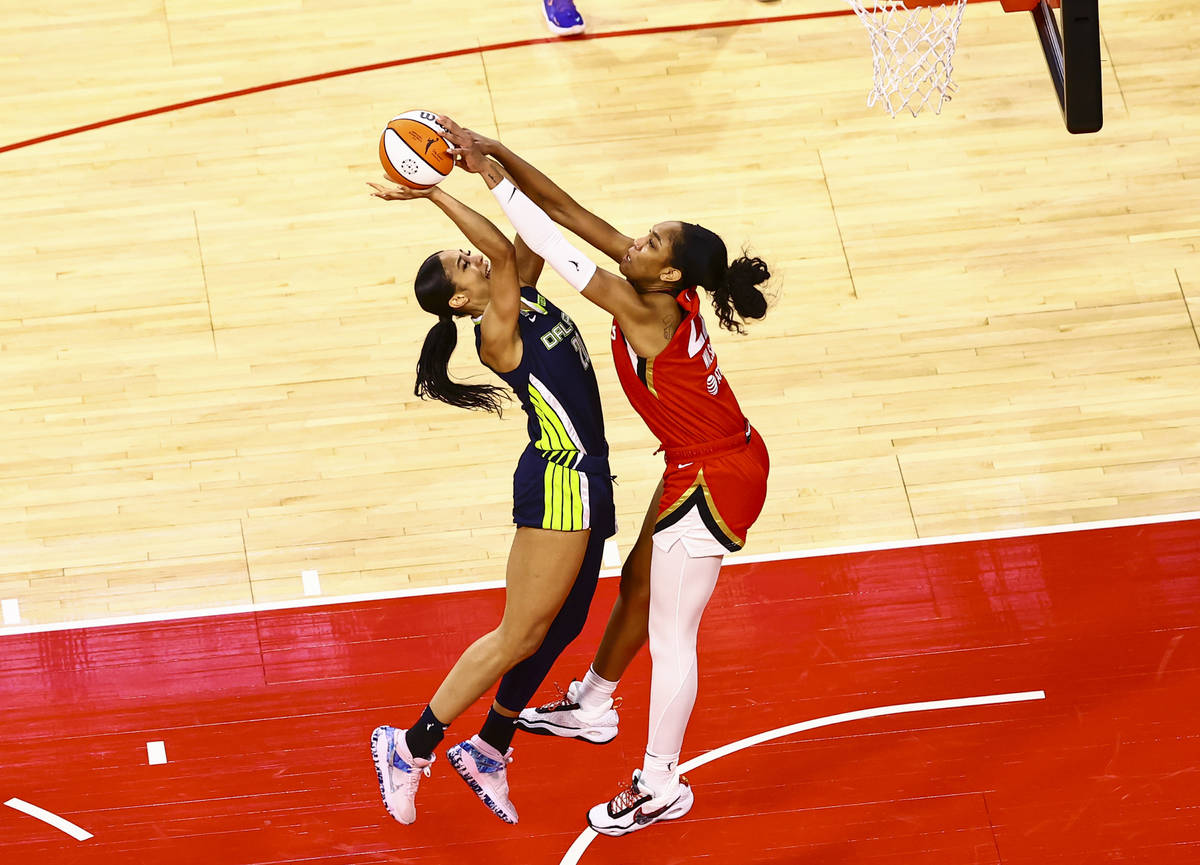 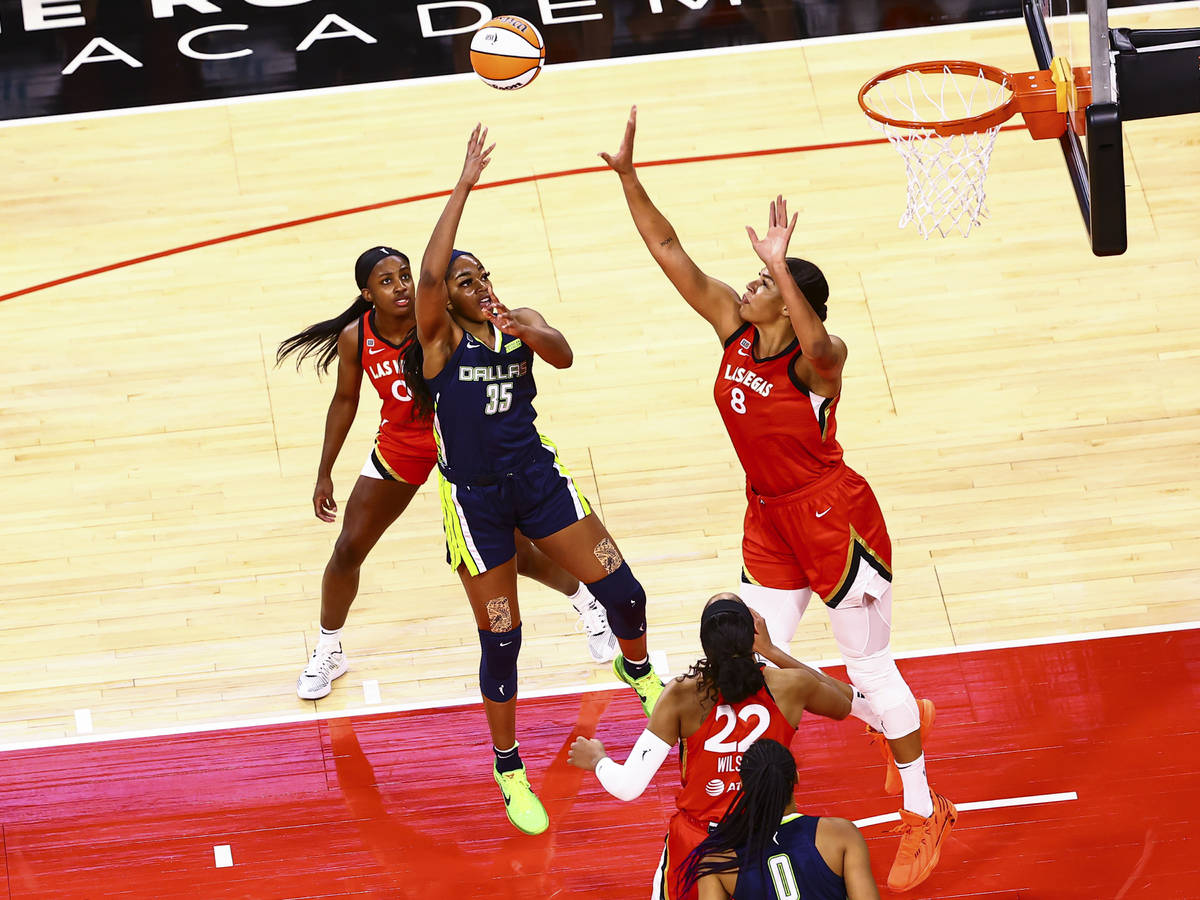 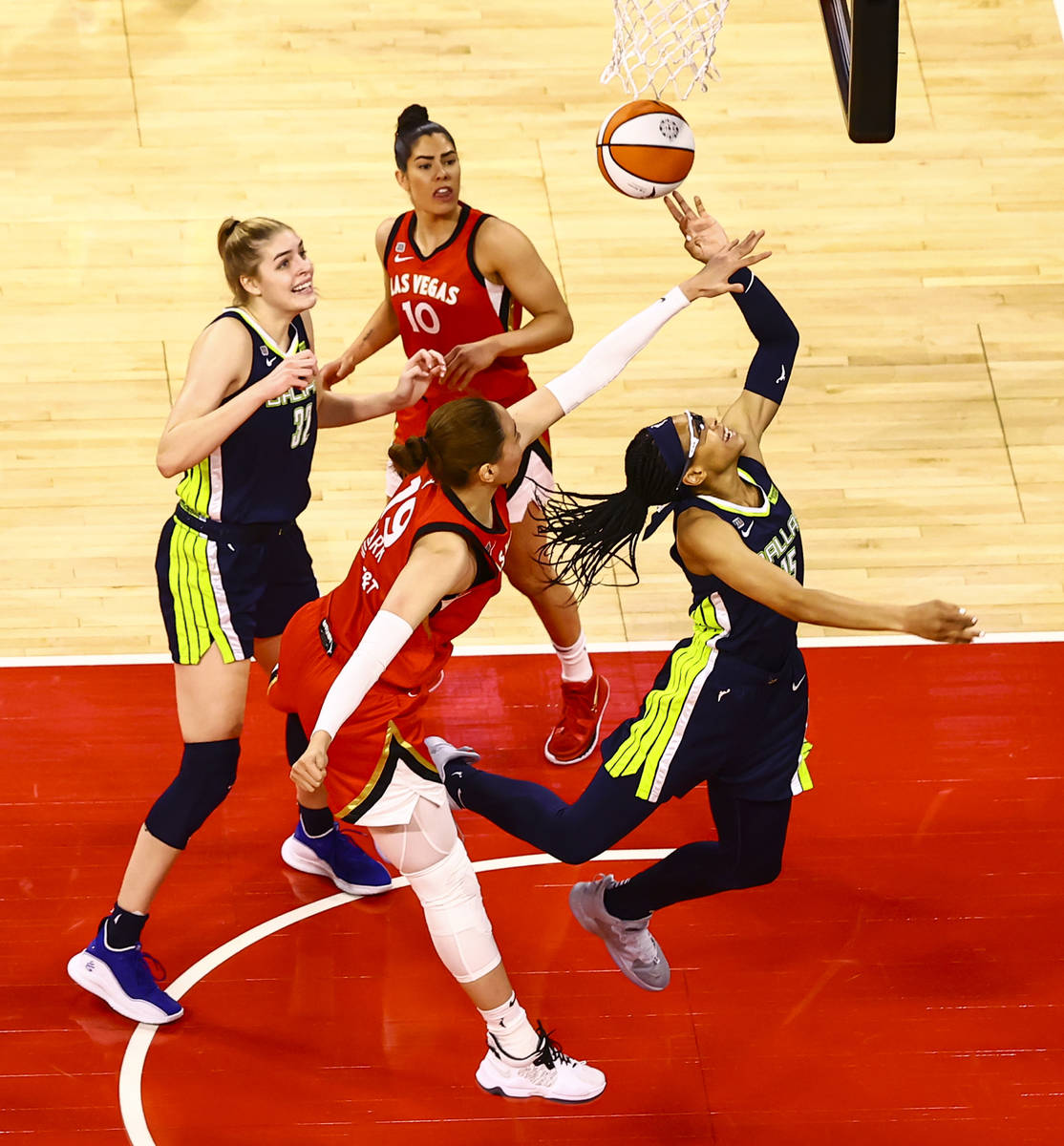 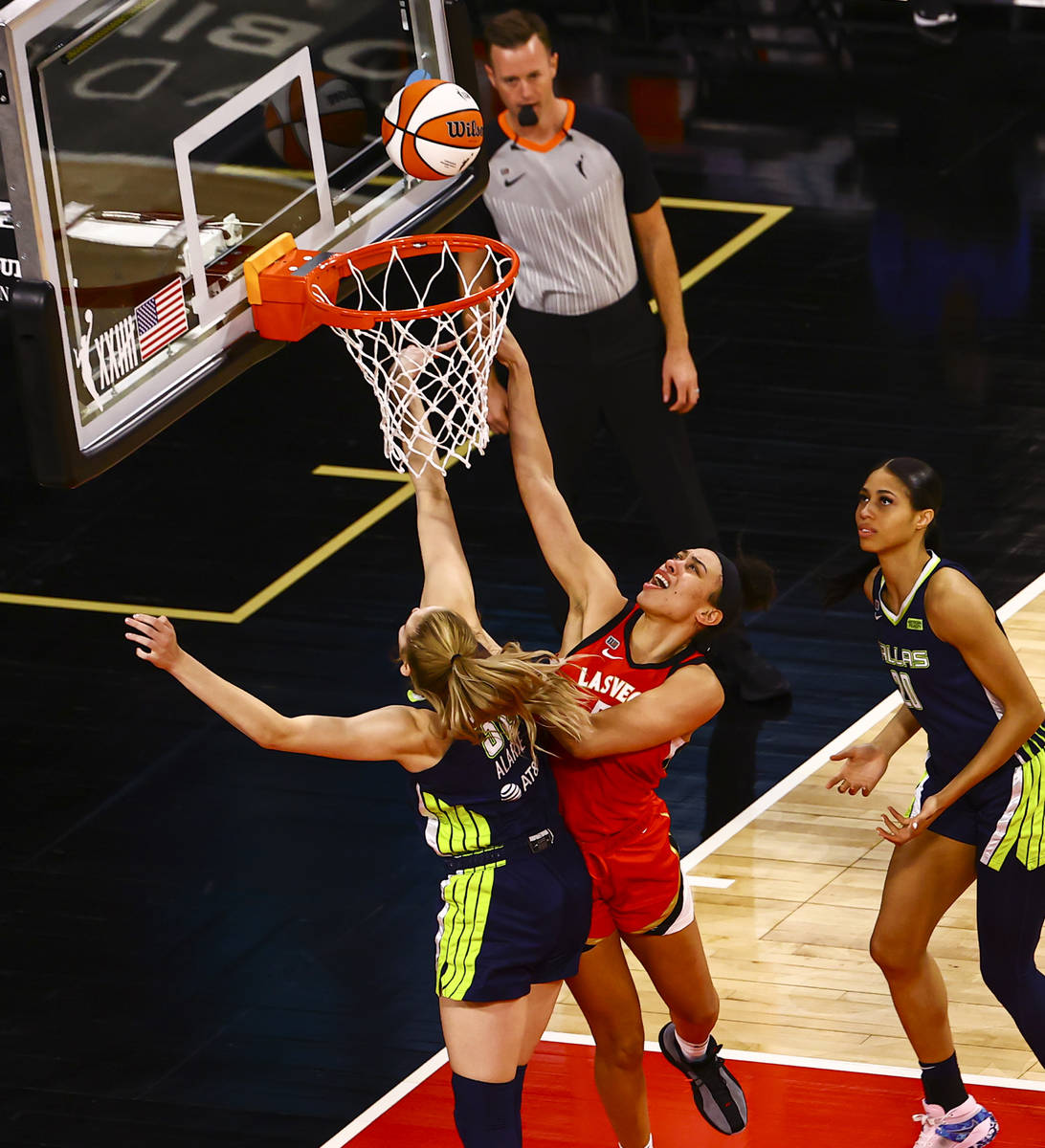 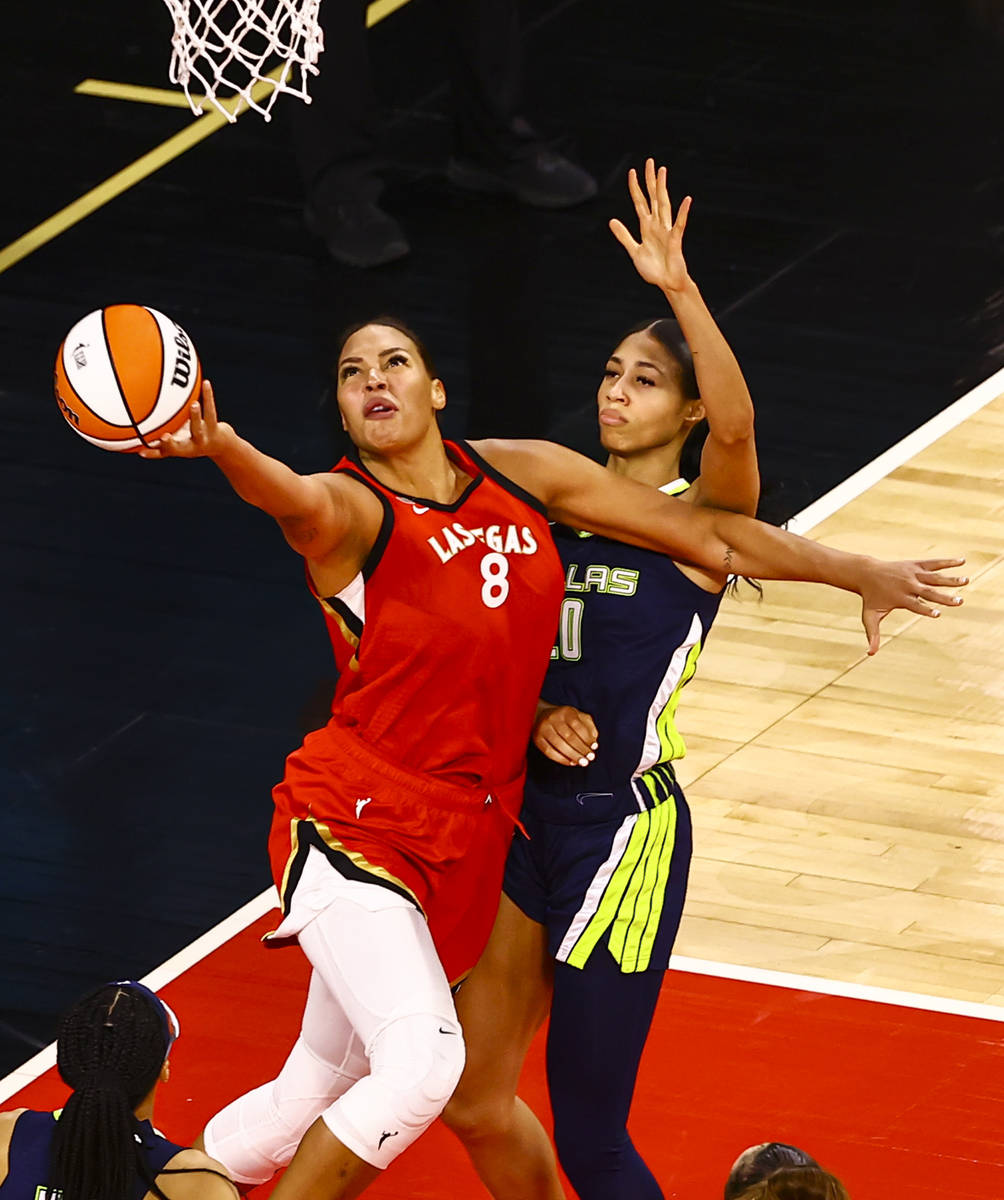 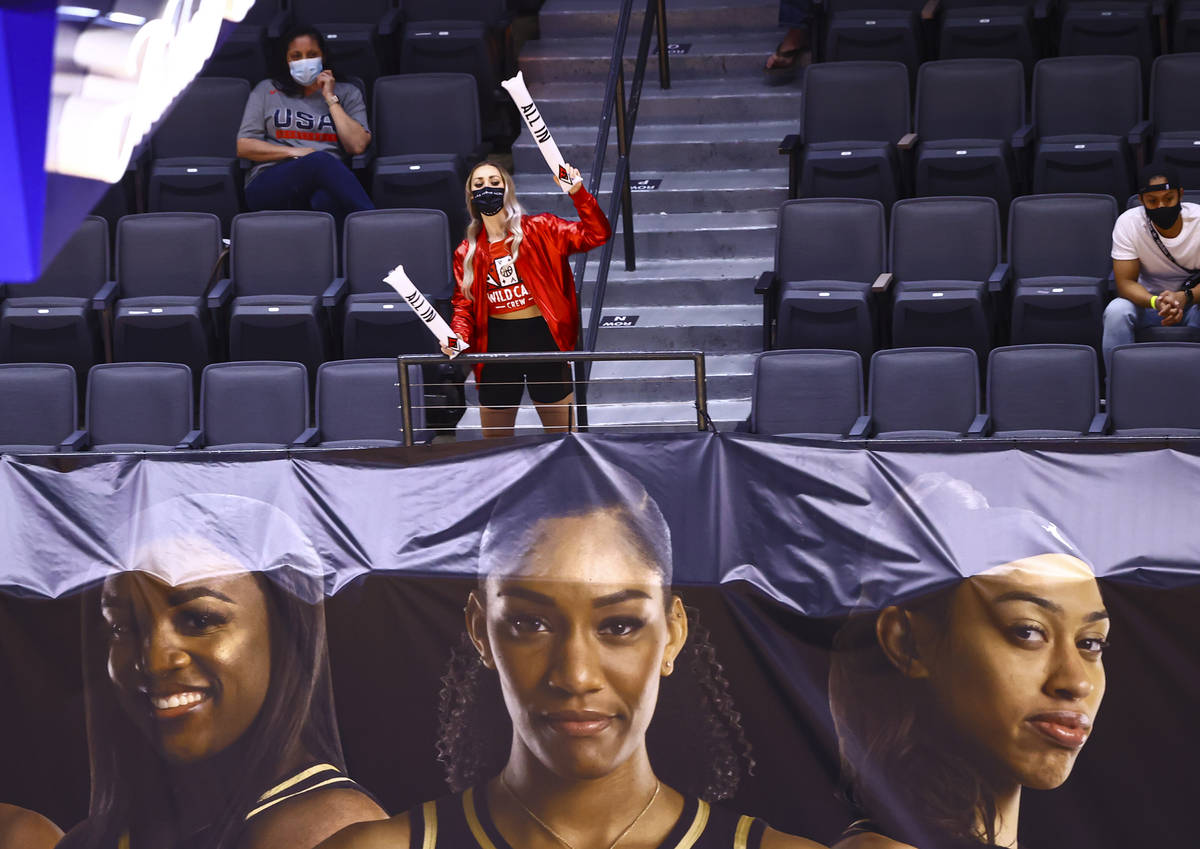 A member of the Las Vegas Aces Wild Card crew cheers during the second quarter of a WNBA basketball game against the Dallas Wings at Michelob Ultra Arena in Las Vegas on Sunday, June 13, 2021. (Chase Stevens/Las Vegas Review-Journal) @csstevensphoto 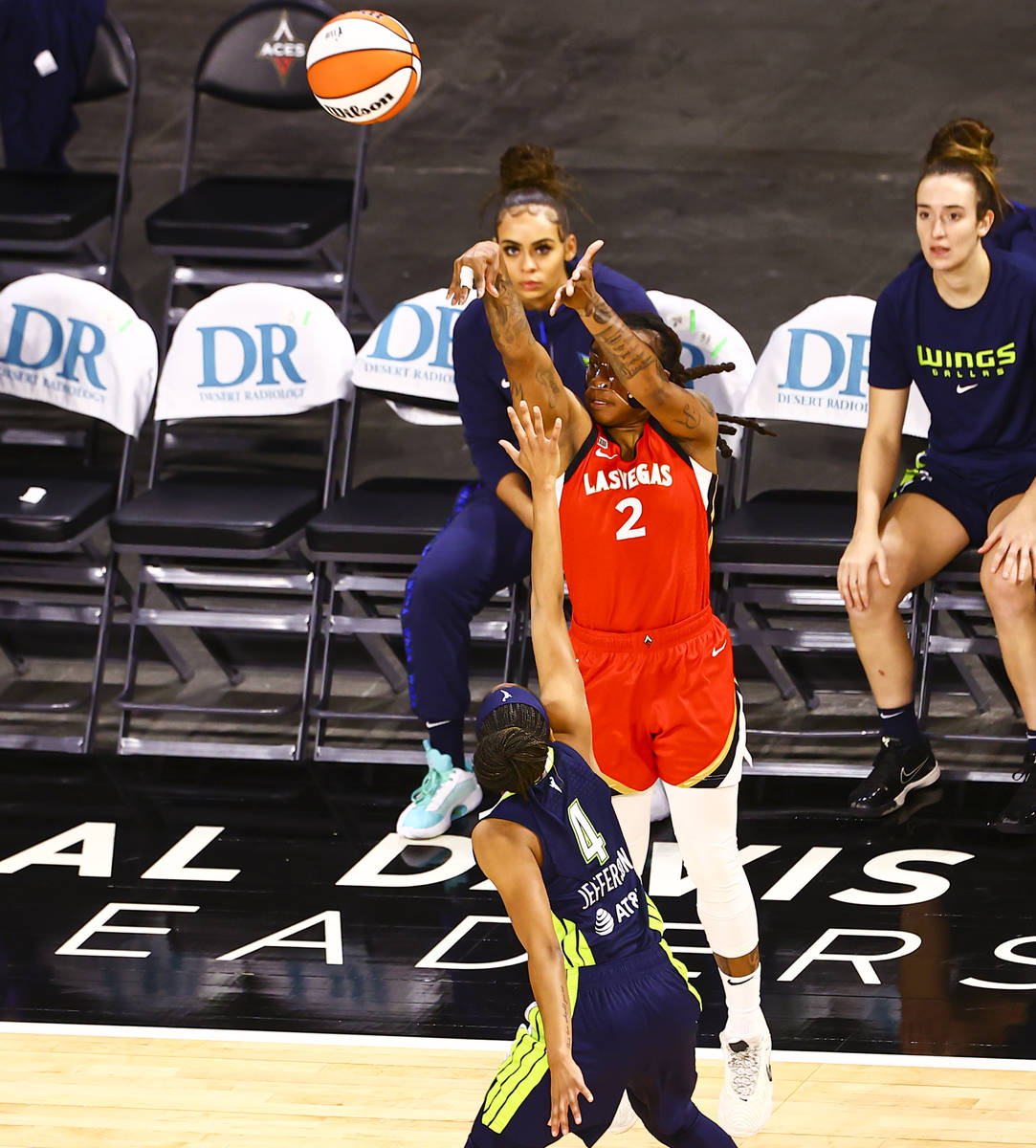 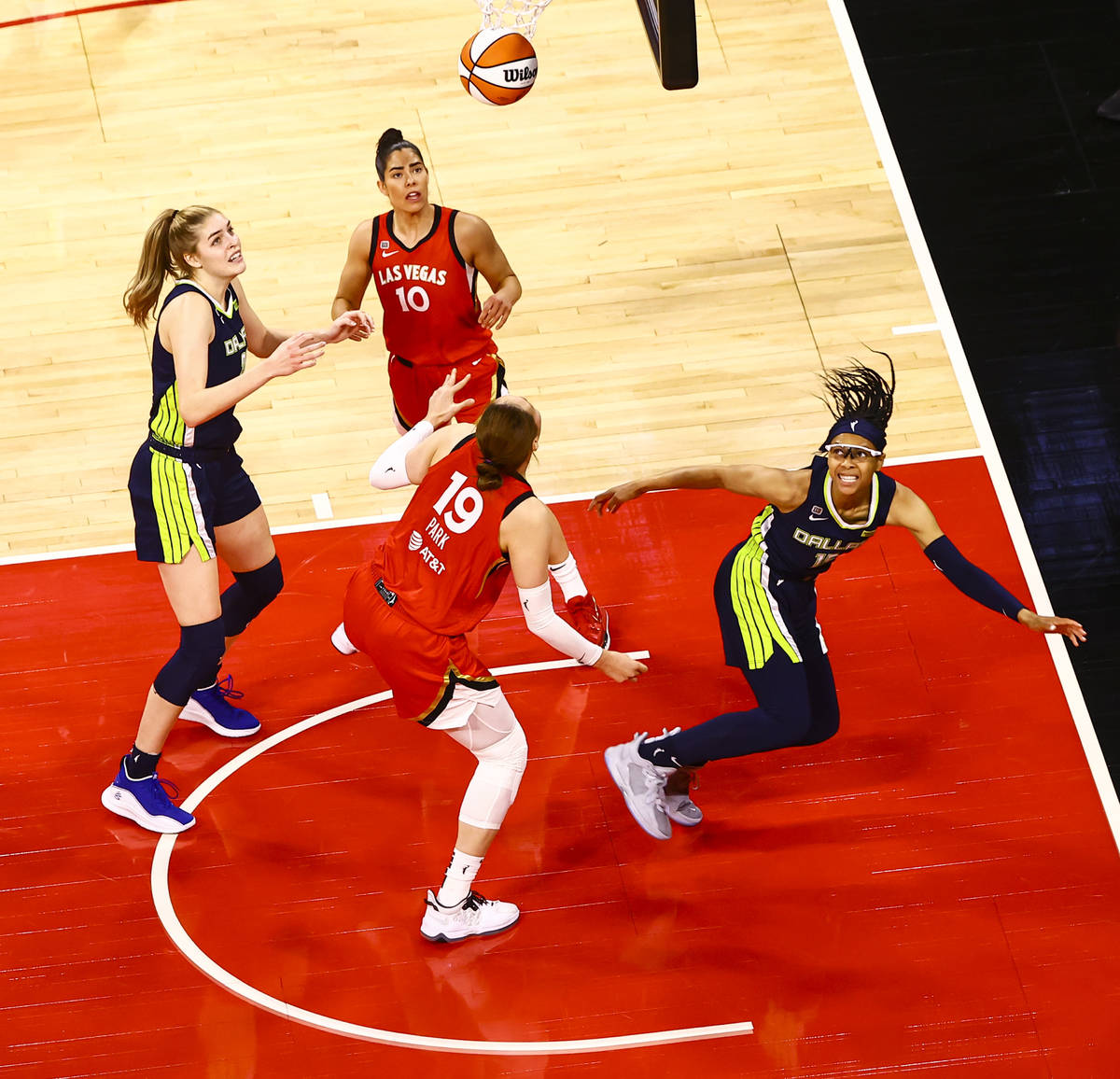 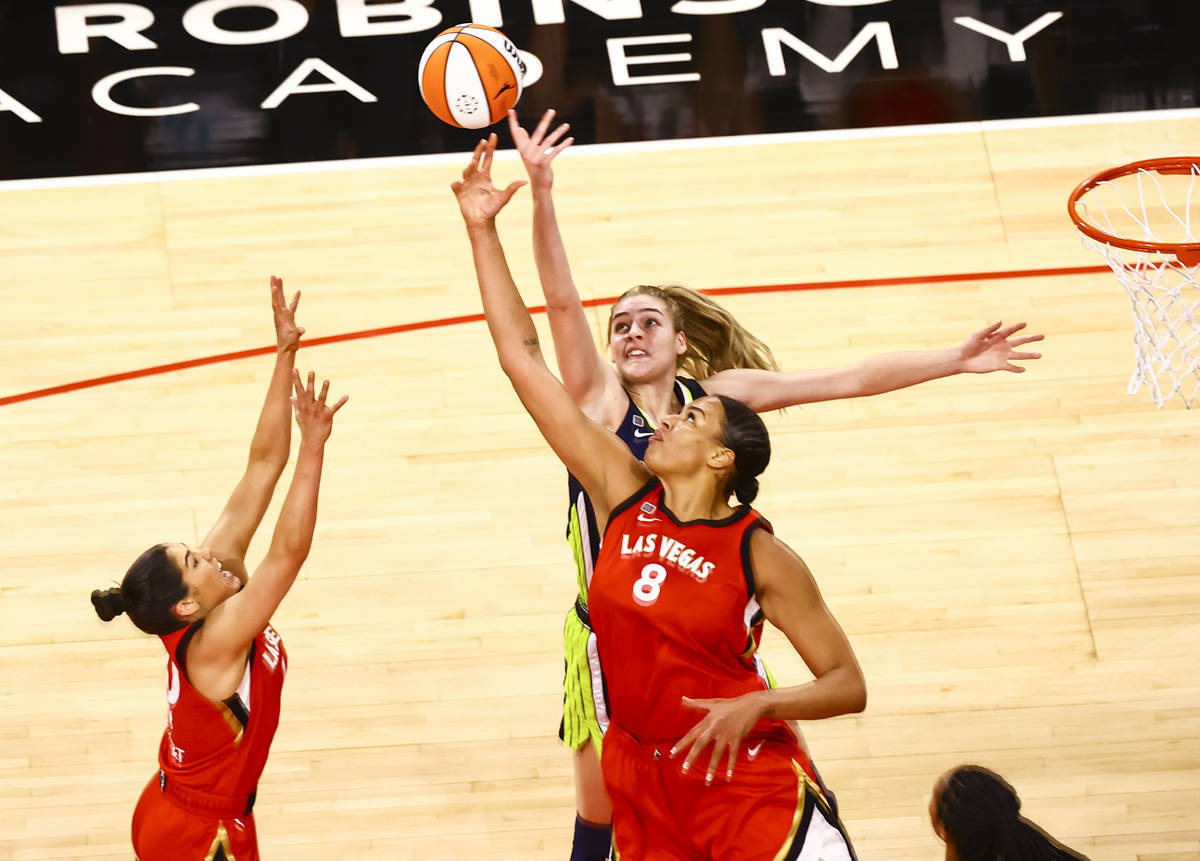 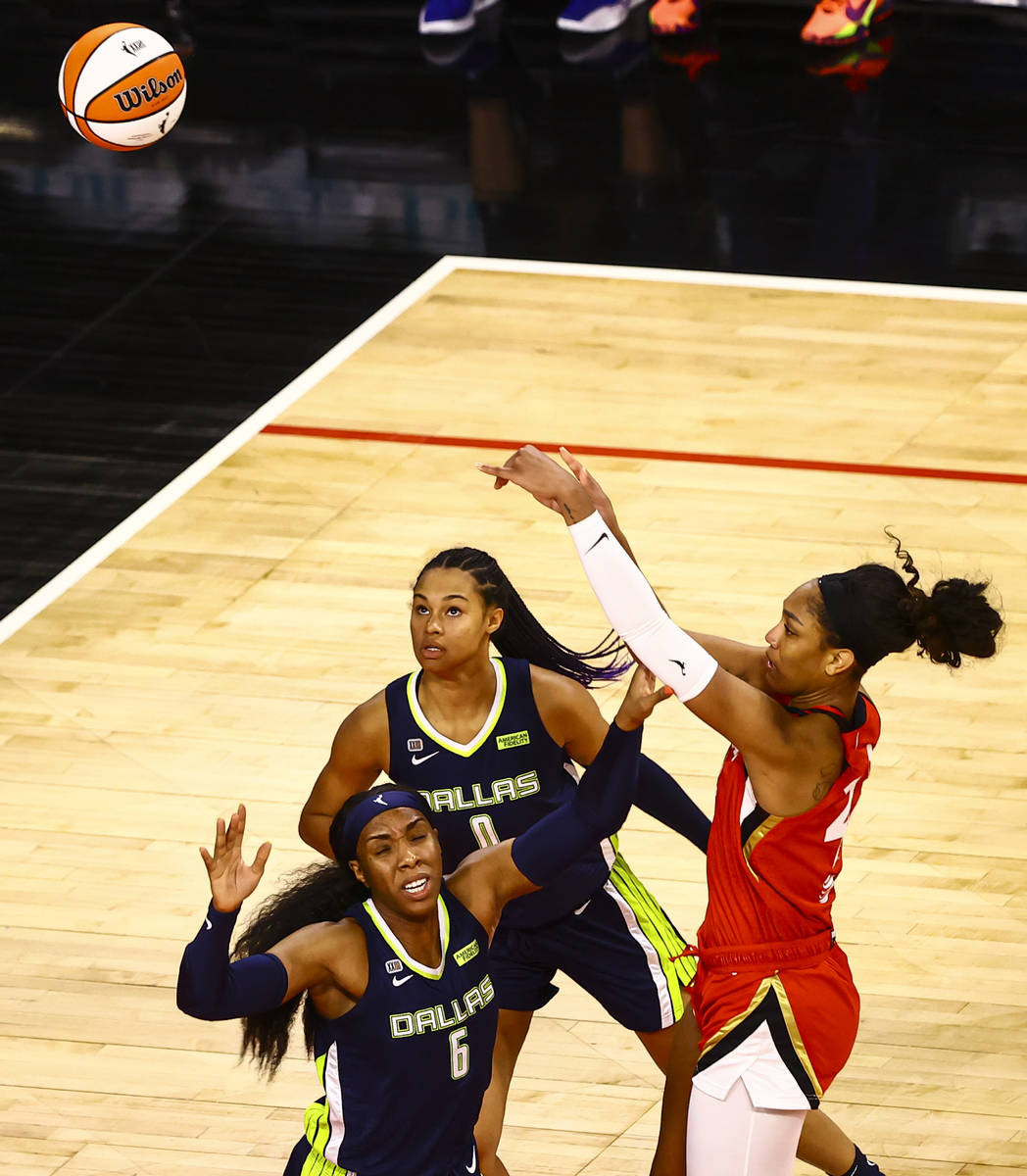 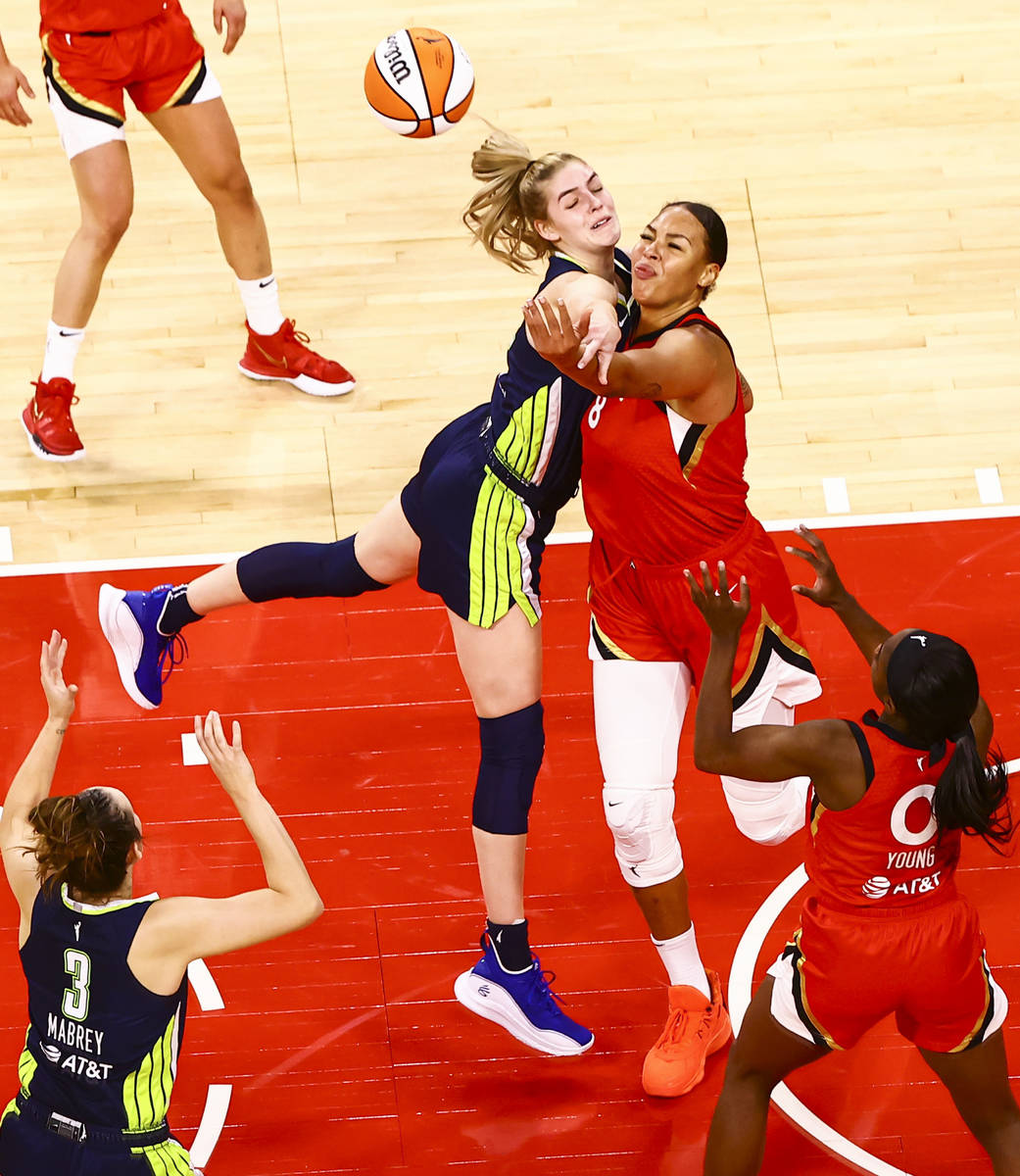 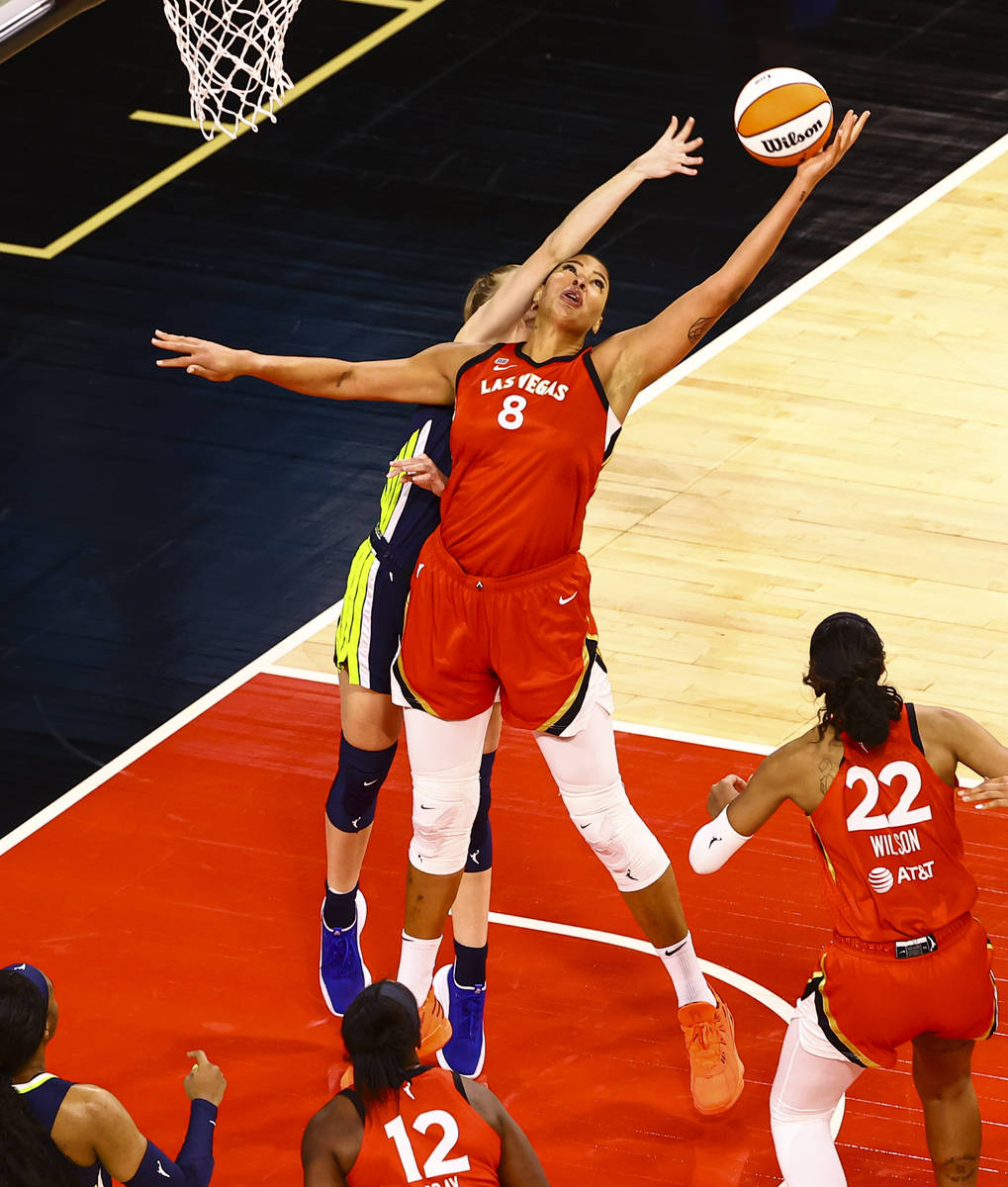 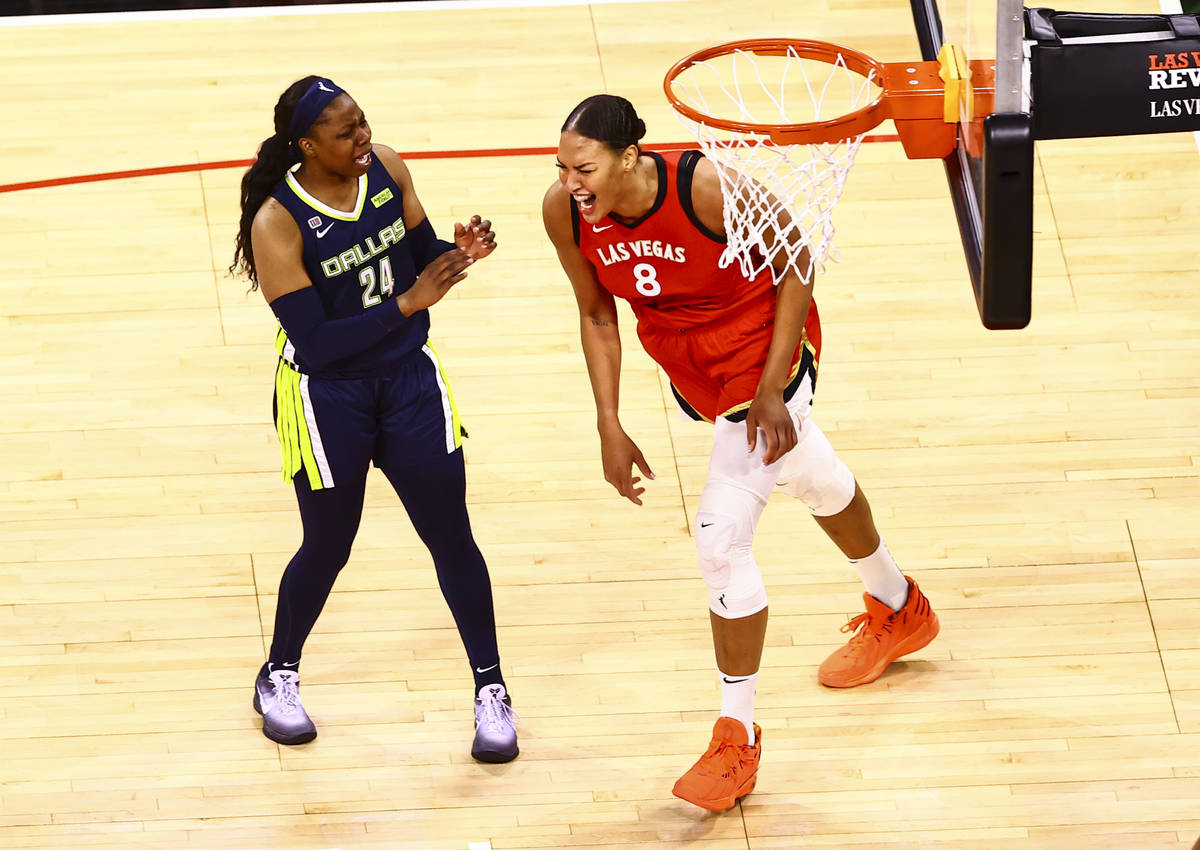 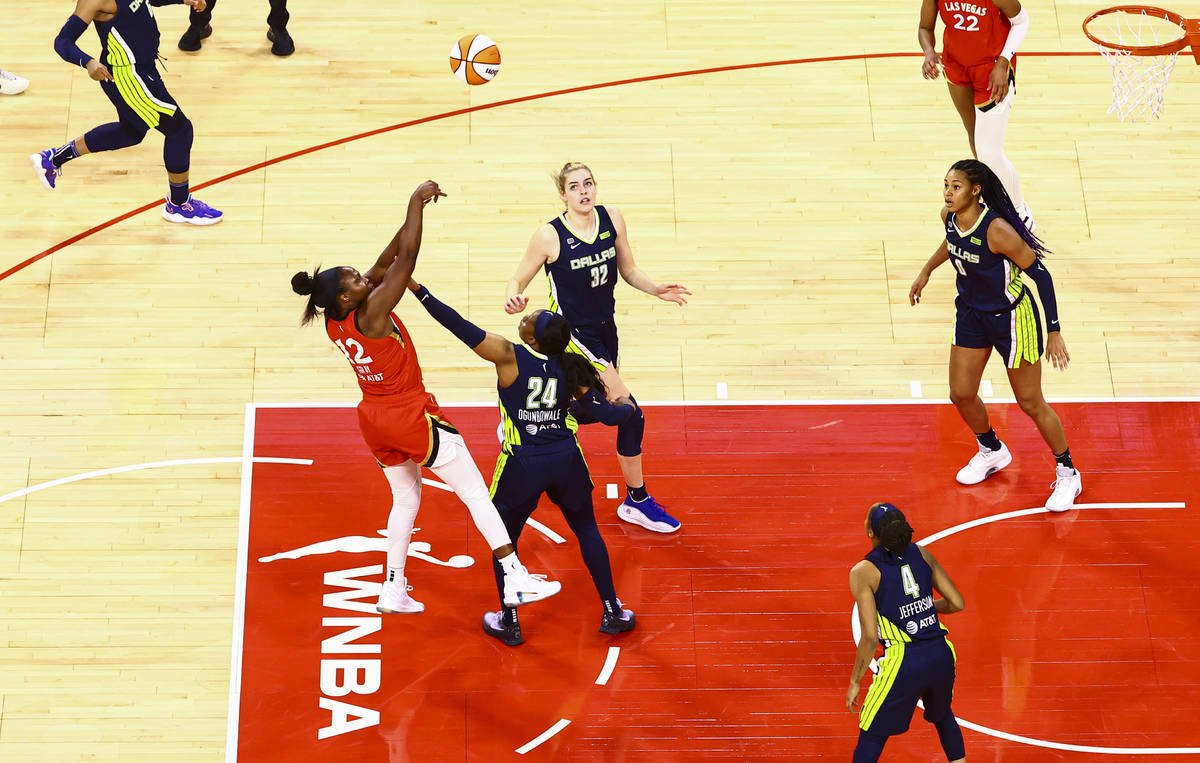 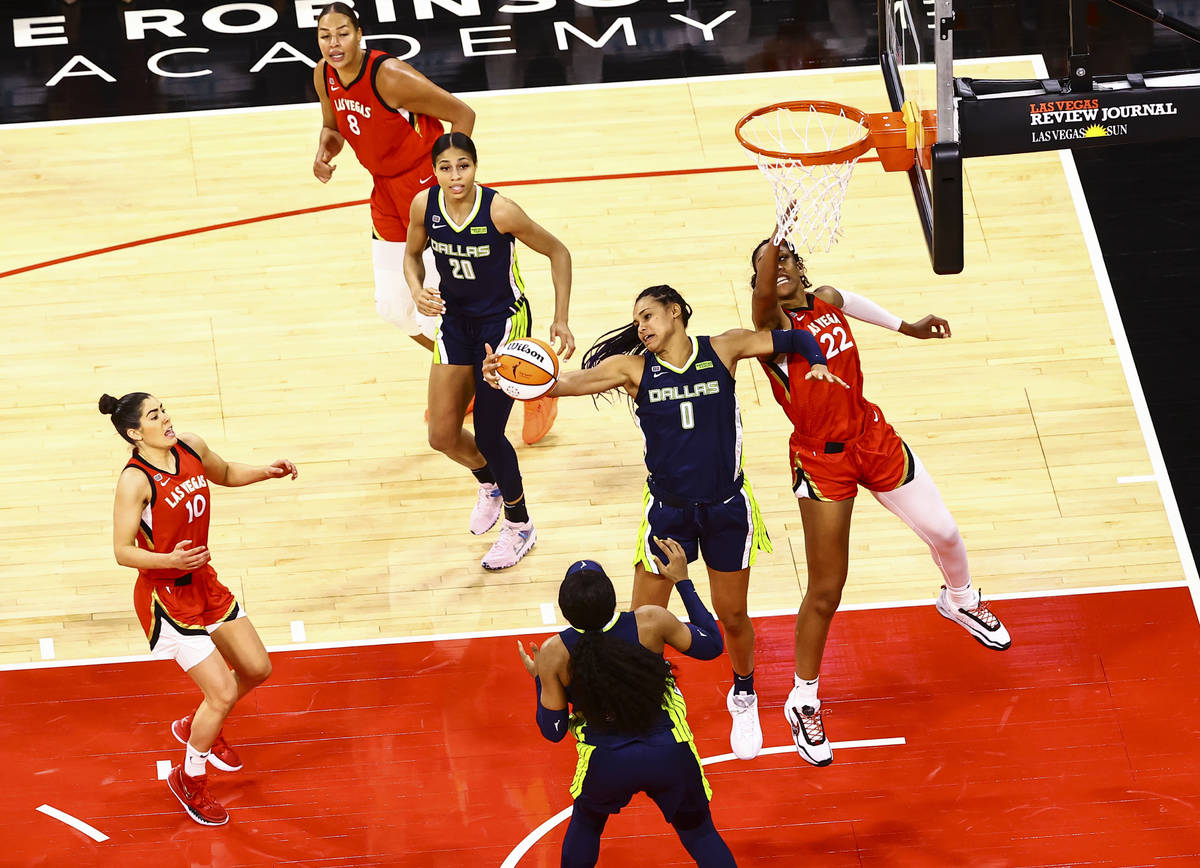 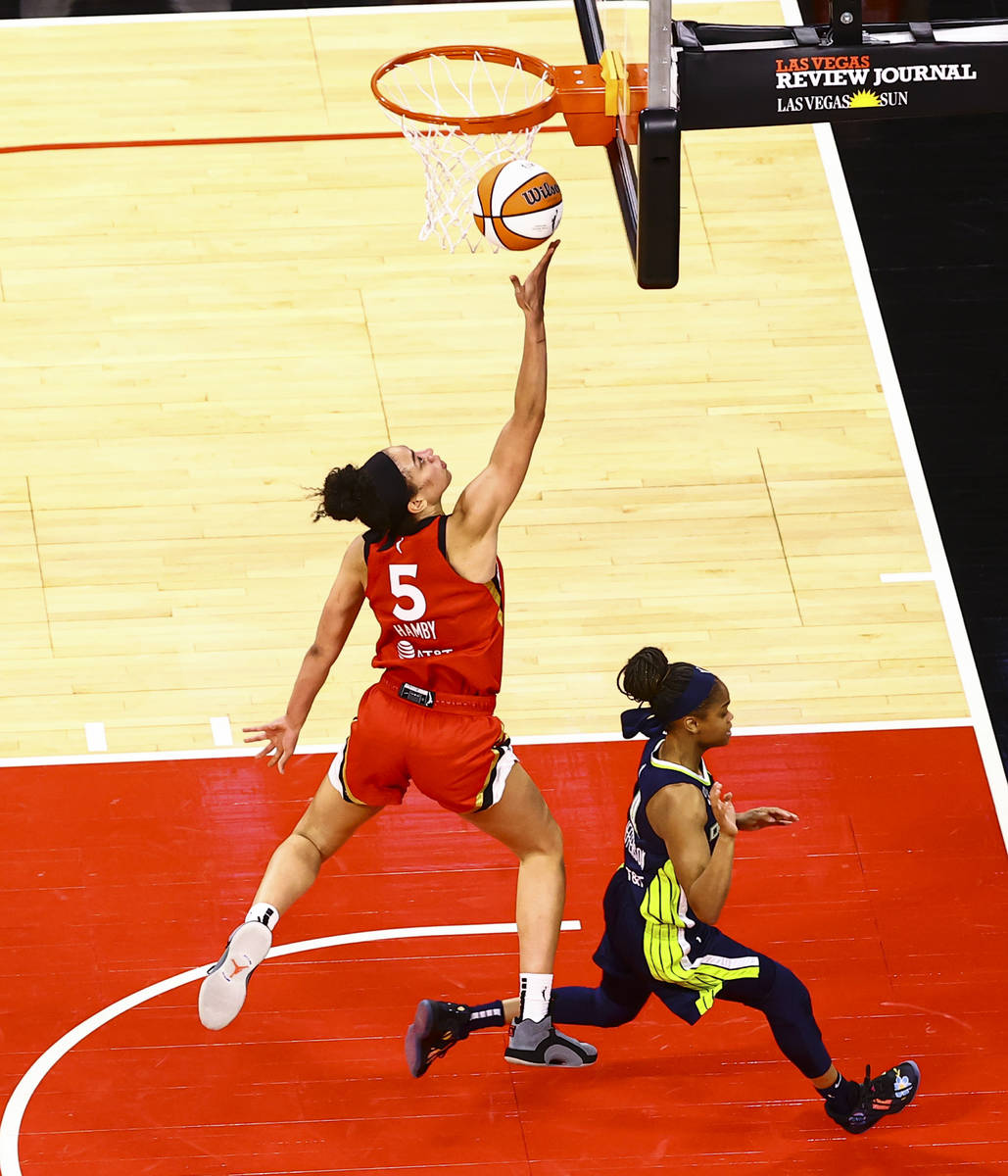 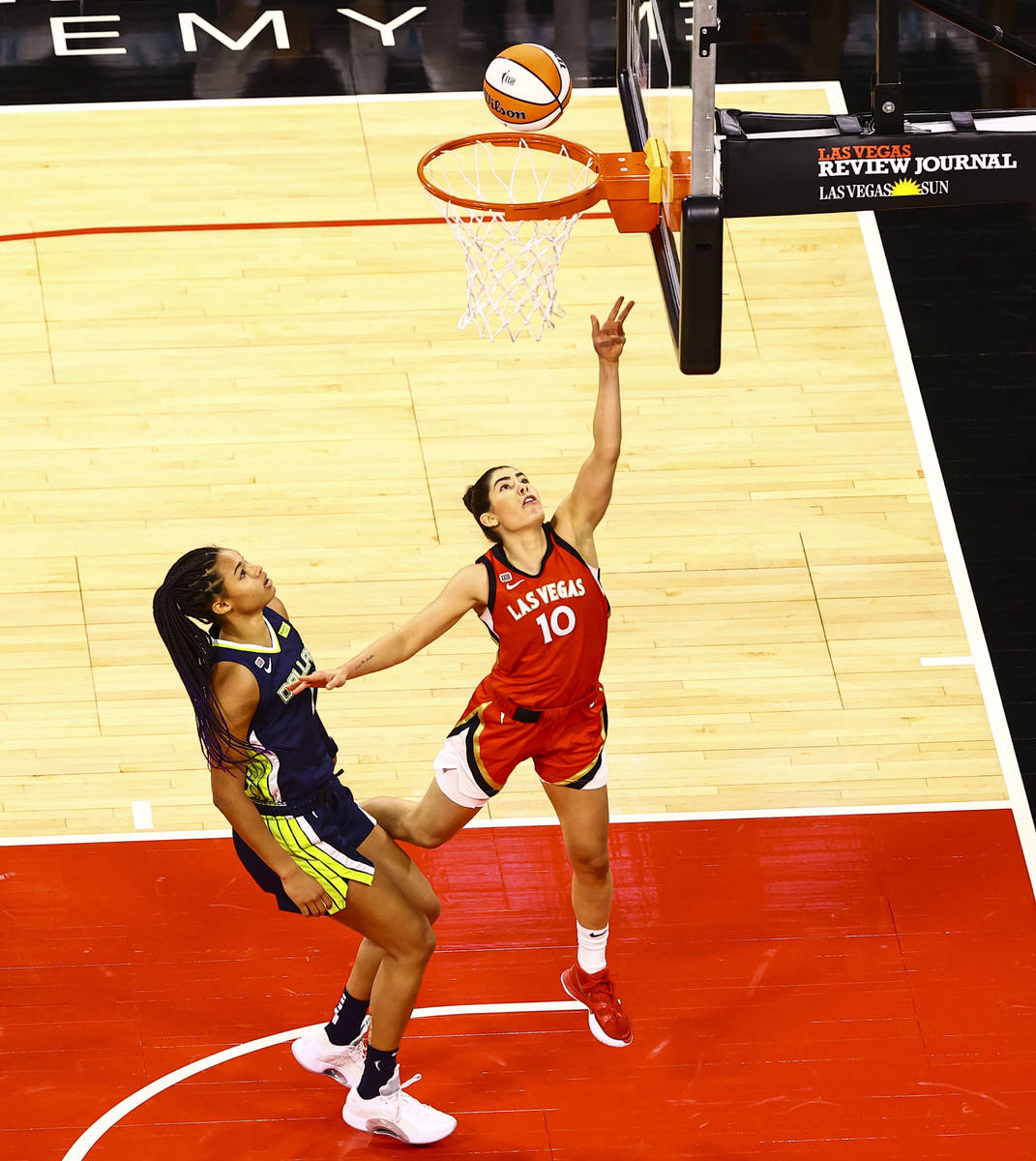 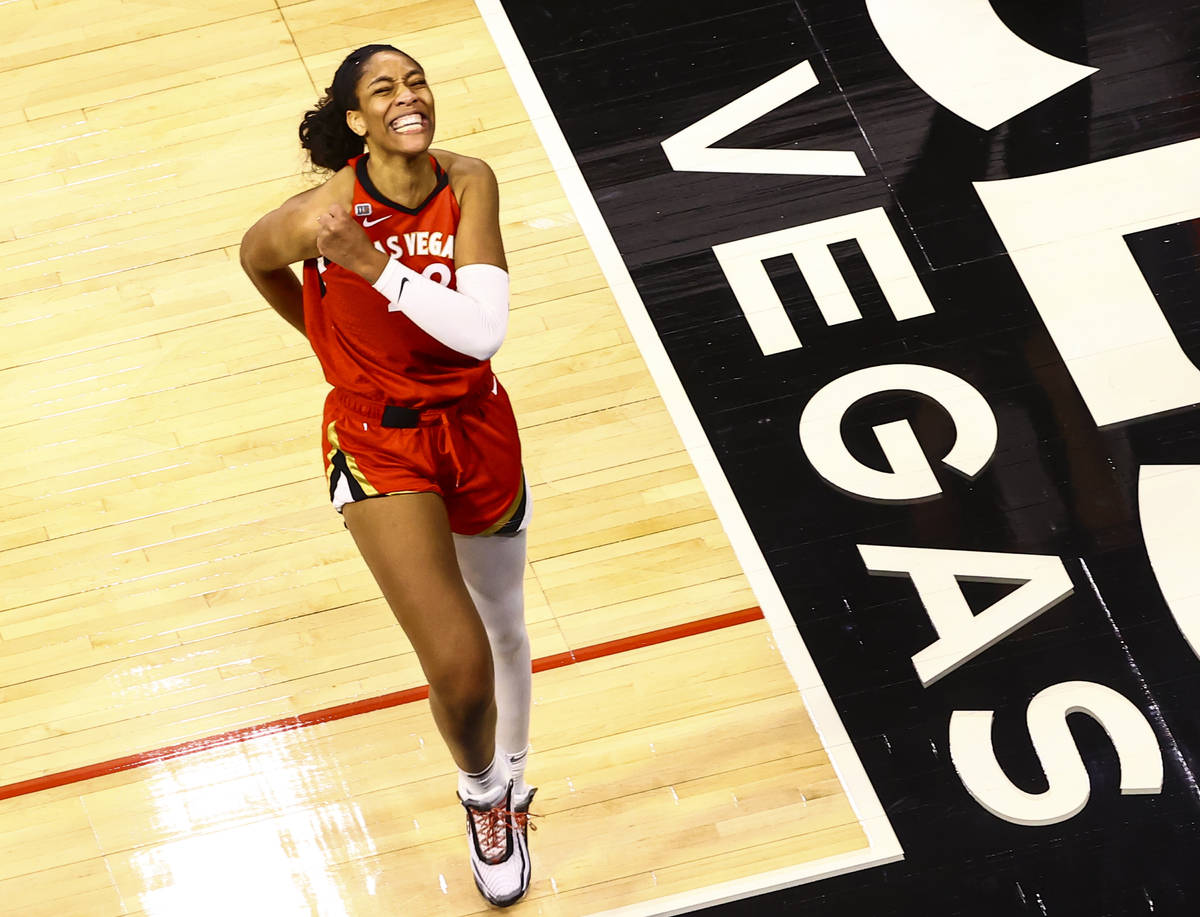 “It gets my team fired up when I get fired up, and it all goes down from there,” Wilson said. “It’s hard to be that leader. To keep going. To will your team.”

But on Sunday, the Aces star forward made it seem easy.

Wilson scored 19 of her 28 points in the second half of an 85-78 victory over the Dallas Wings at Michelob Ultra Arena to power Las Vegas to its sixth win in its past seven games. She added 14 rebounds and two blocks, one of which she made with two hands to ignite an announced crowd of 2,126 that included Raiders coach Jon Gruden.

The 24-year-old humbly praised her teammates afterward, explaining that her success is the result of being “surrounded by great players and great people that make me comfortable to where I can perform at a high level consistently for them.”

Such as Aces center Liz Cambage, who overcame a slow start to finish with 14 points, eight rebounds and a clutch 3-pointer late in the game.

Or guard Kelsey Plum, who came off the bench to score a season-high 13 points in her first home game of the season.

“That team can’t guard Liz or A’ja in the post,” Aces coach Bill Laimbeer said. “When we needed some buckets, we went to them. … That’s who we are. We’re an inside-out team.”

The Aces (8-3) hadn’t played since June 5 and were eager to end their layoff after a week that included plenty of practice and rest. But they had one of their worst all-around performances of the season against Dallas (5-6), turning the ball over 16 times and allowing 14 offensive rebounds. An early 11-point lead turned into a three-point deficit in the third quarter.

But Wilson intervened by unveiling her potent offensive arsenal.

Deep seals in the low post turned into layups or short jumpers. Catches in the mid post resulted in fadeaway jumpers or drives to the basket. Cambage was limited to four points in the first half but buried her defenders under the basket en route to easy baskets in the second half.

Aces guard Riquna Williams keyed a tremendous defensive effort by shadowing Wings star Arike Ogunbowale. She denied the former Notre Dame star the basketball and crowded her when she had it, forcing her into contested jumpers, awkward floaters and a 2-of-12 shooting performance.

“We’ve been off for eight days. We’ve been practicing, but it’s not the same,” said Plum, who also guarded Ogunbowale. “It feels good to get a win. We’ll continue to get better.”

The Aces host the New York Liberty on Tuesday and Thursday.