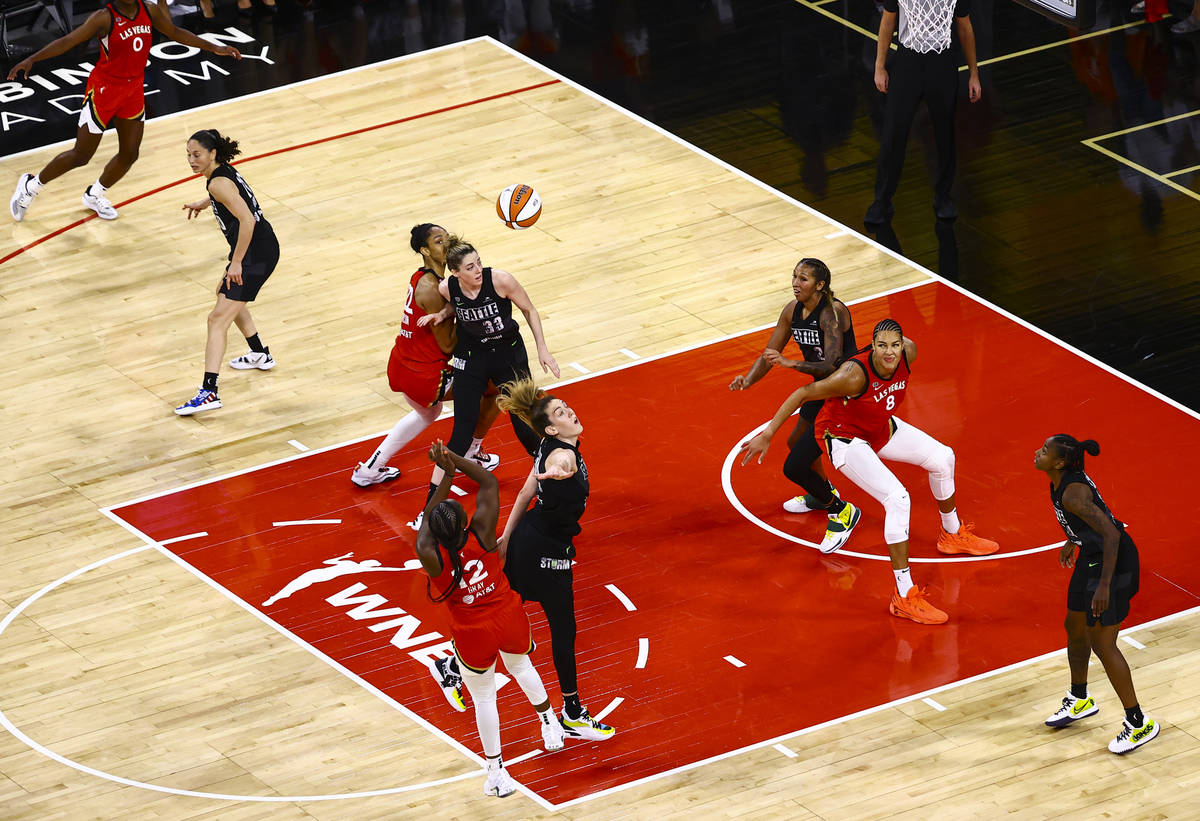 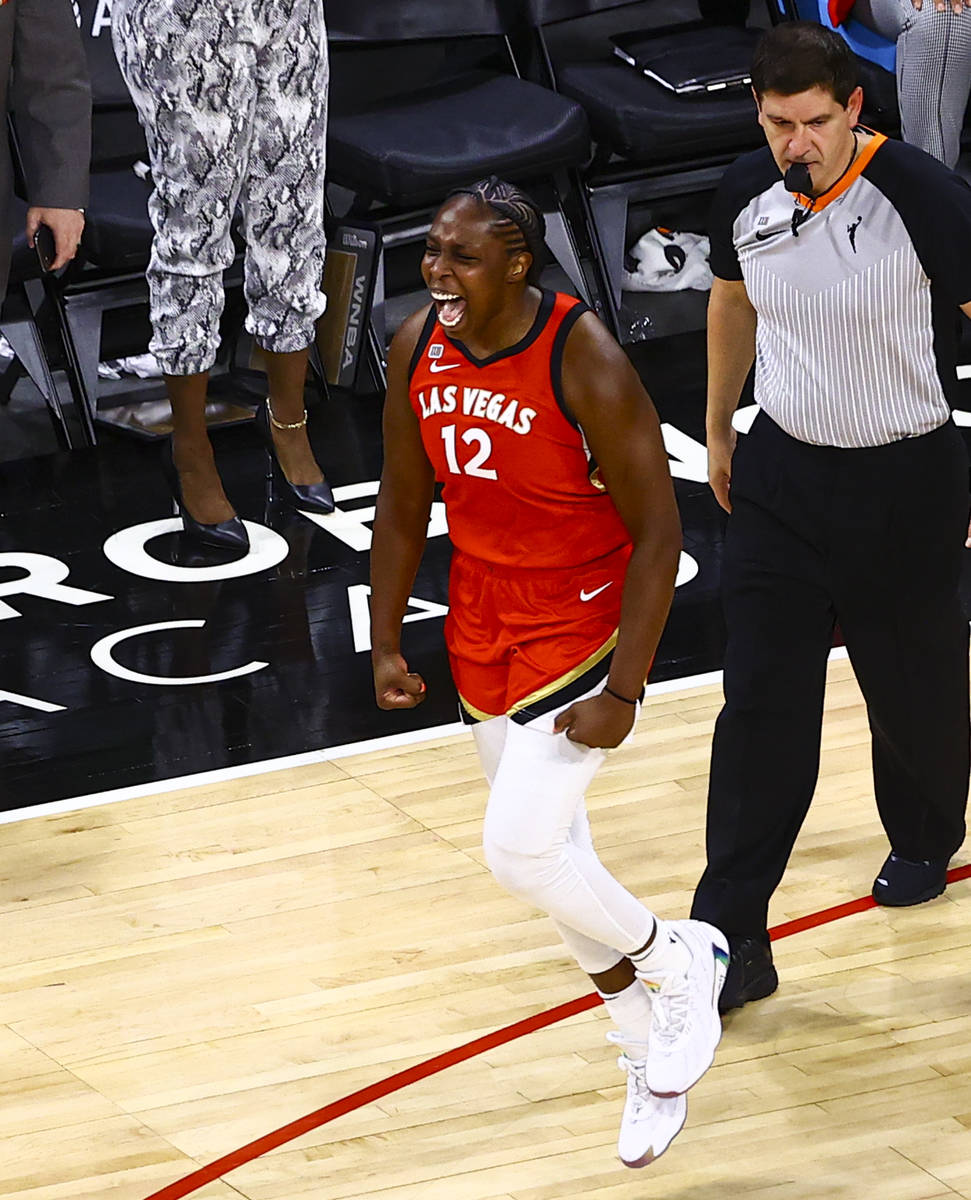 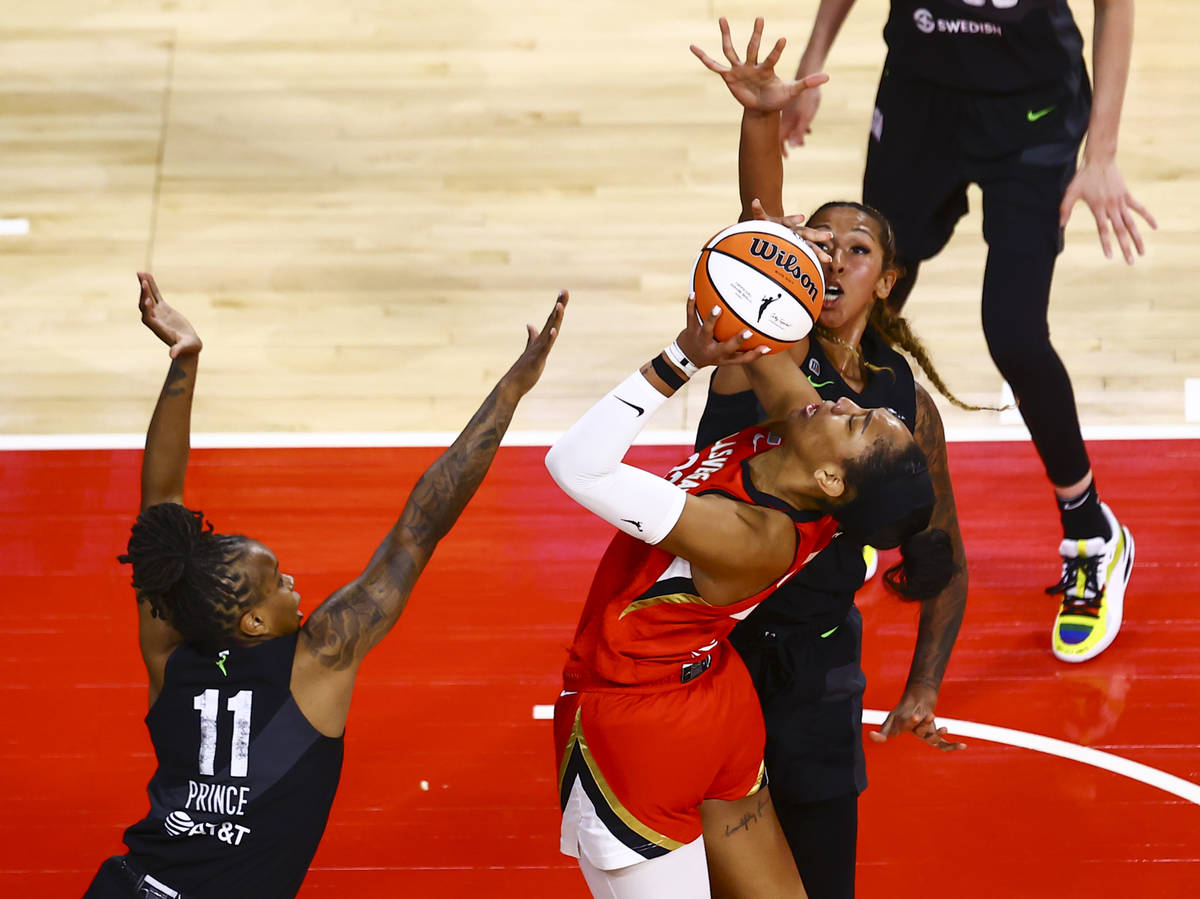 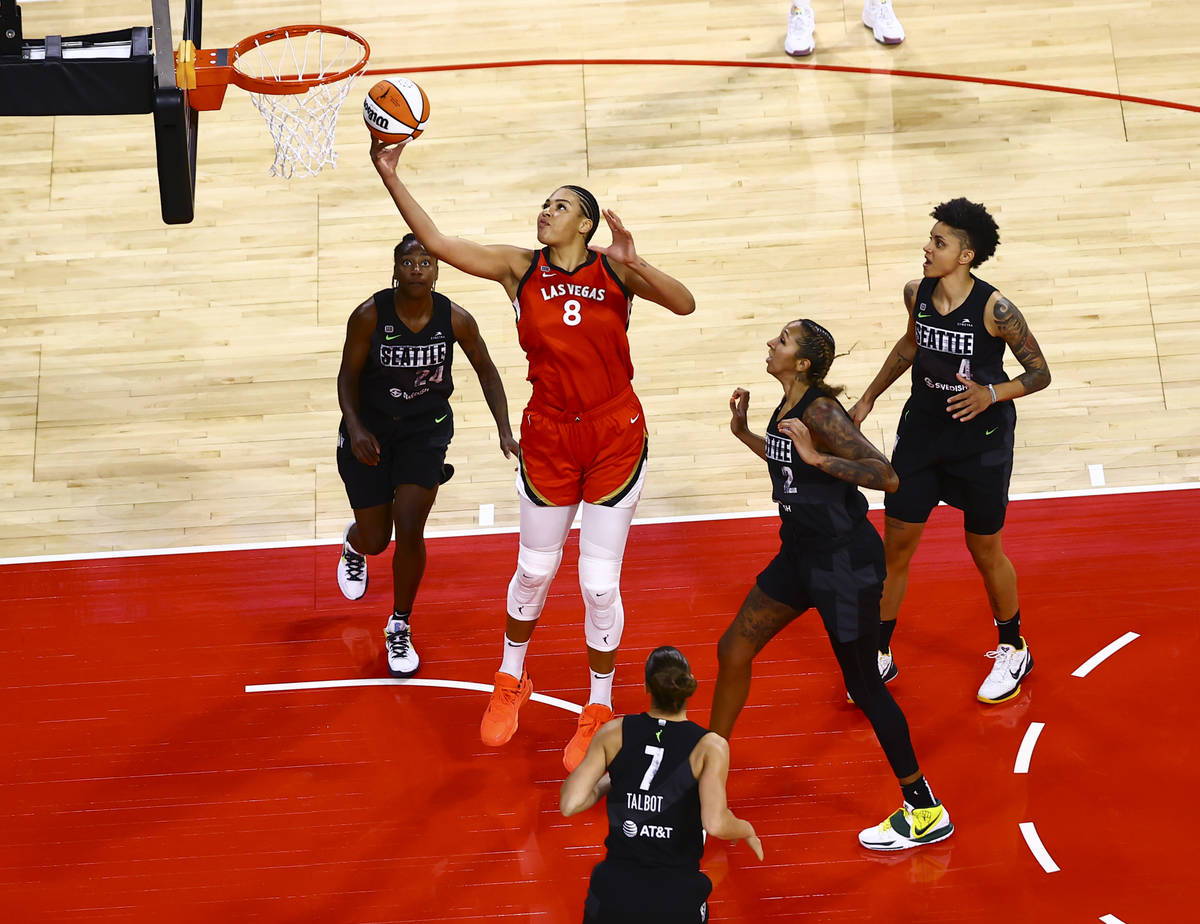 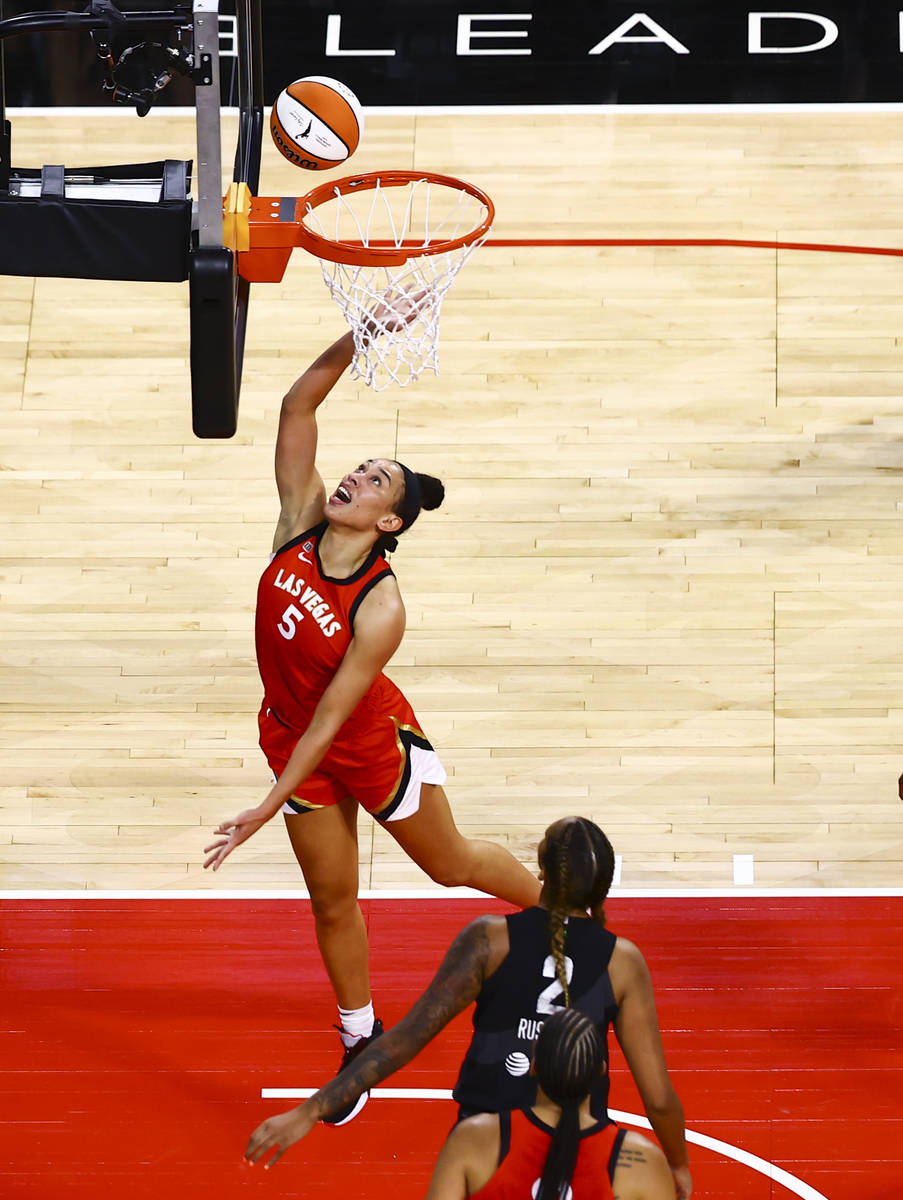 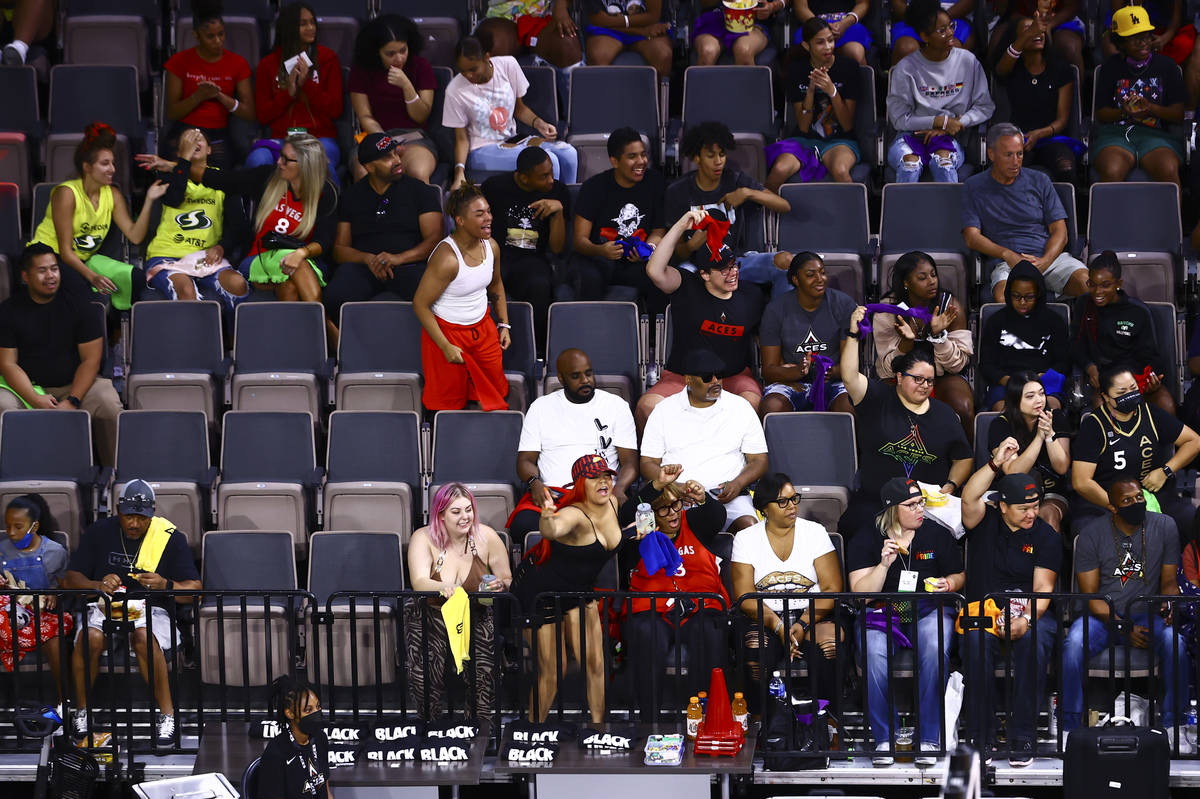 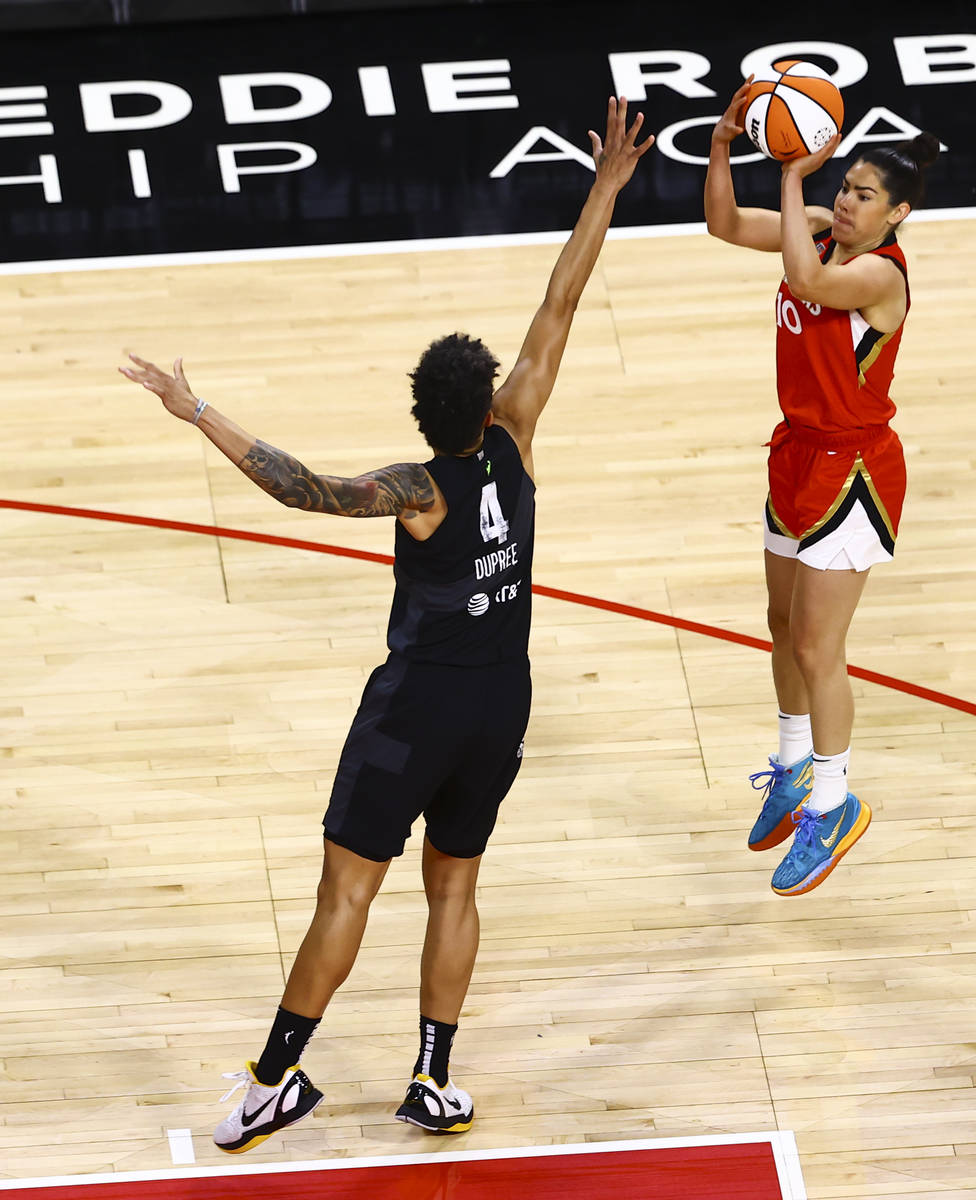 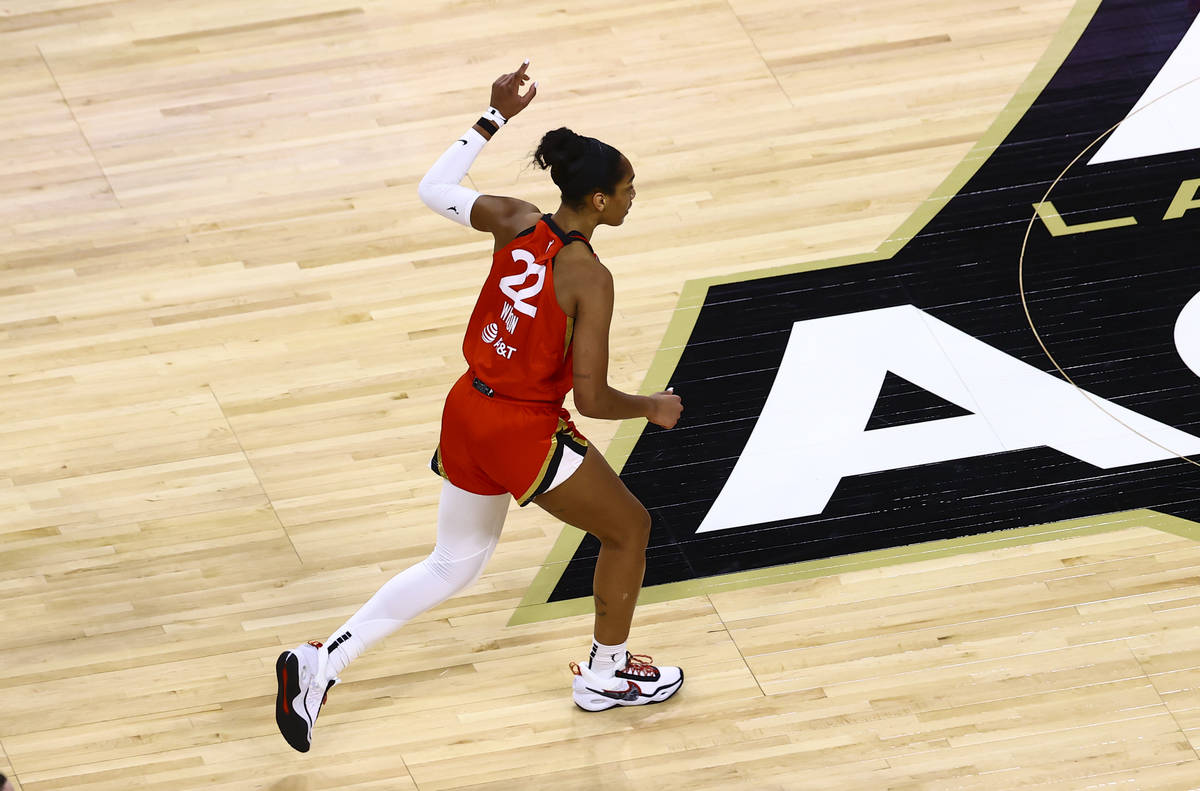 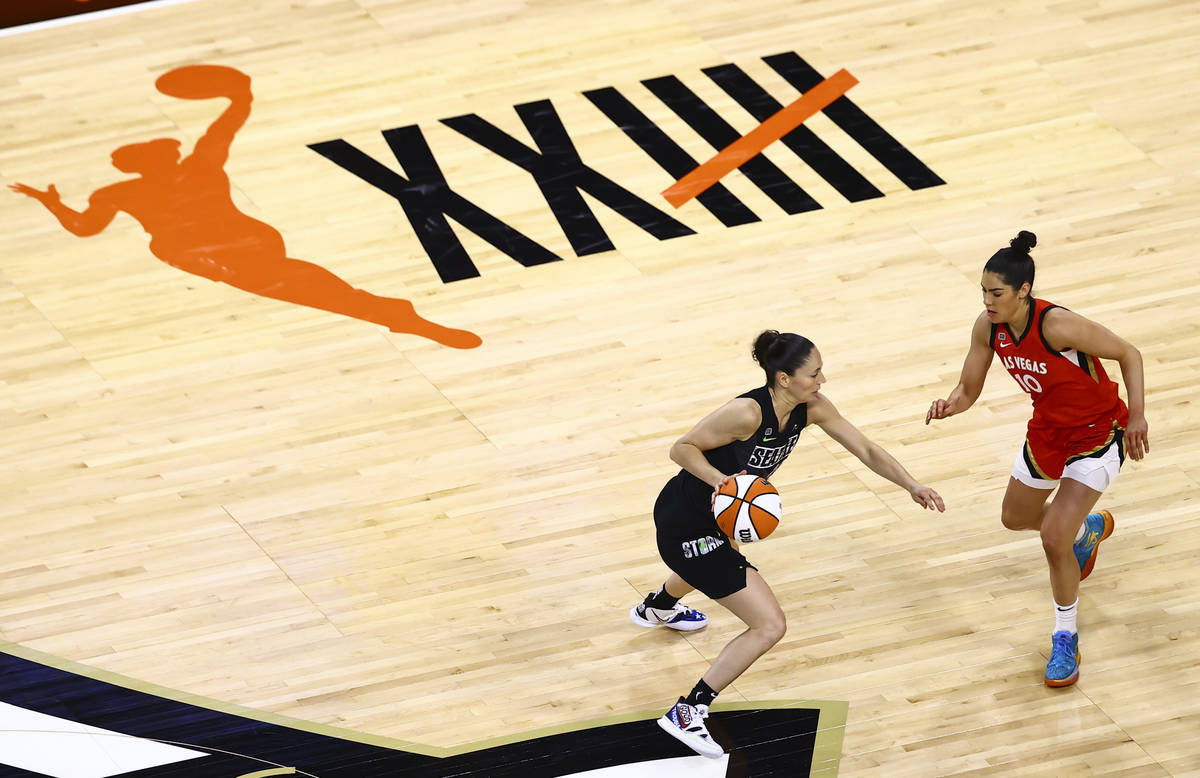 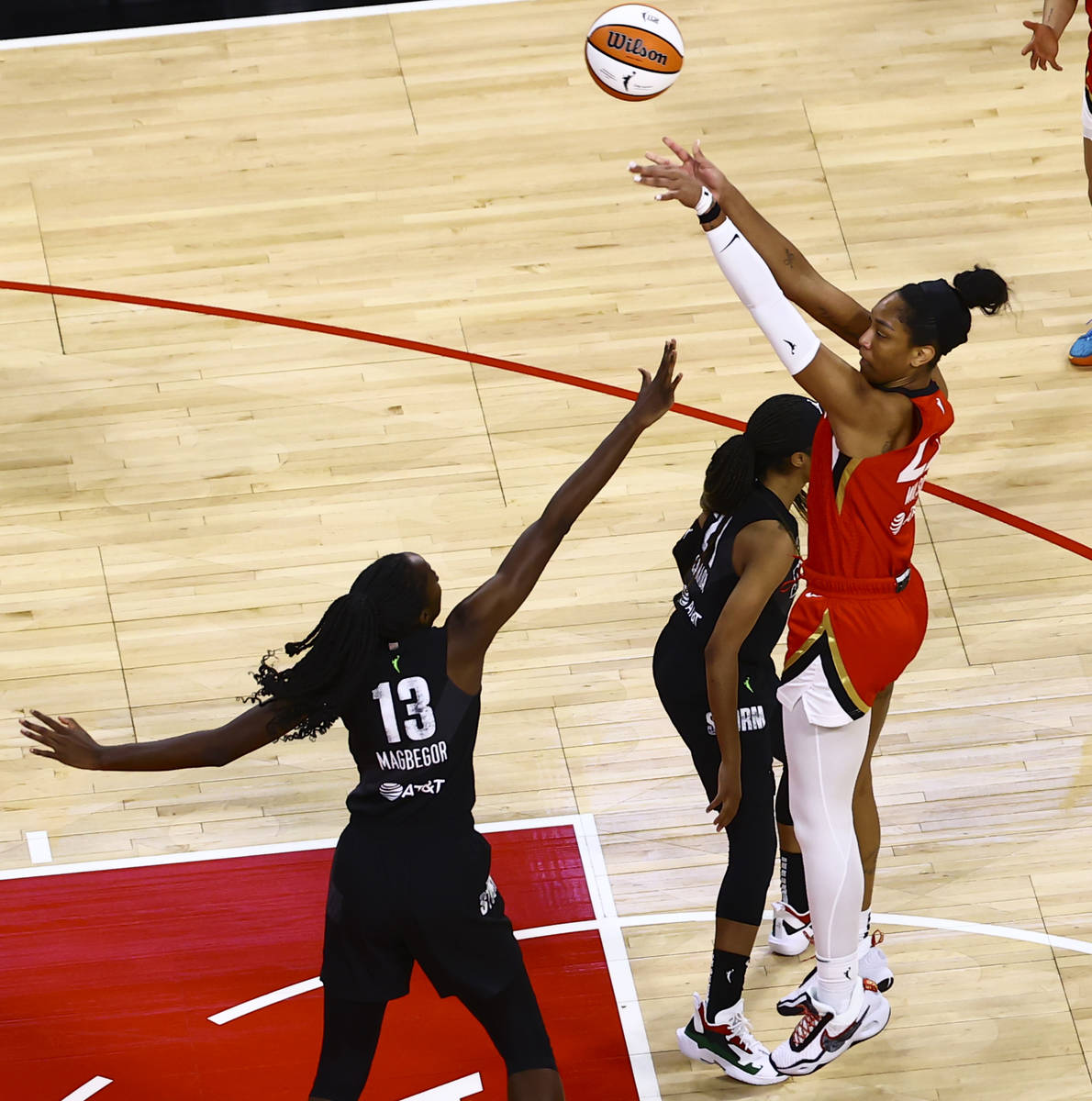 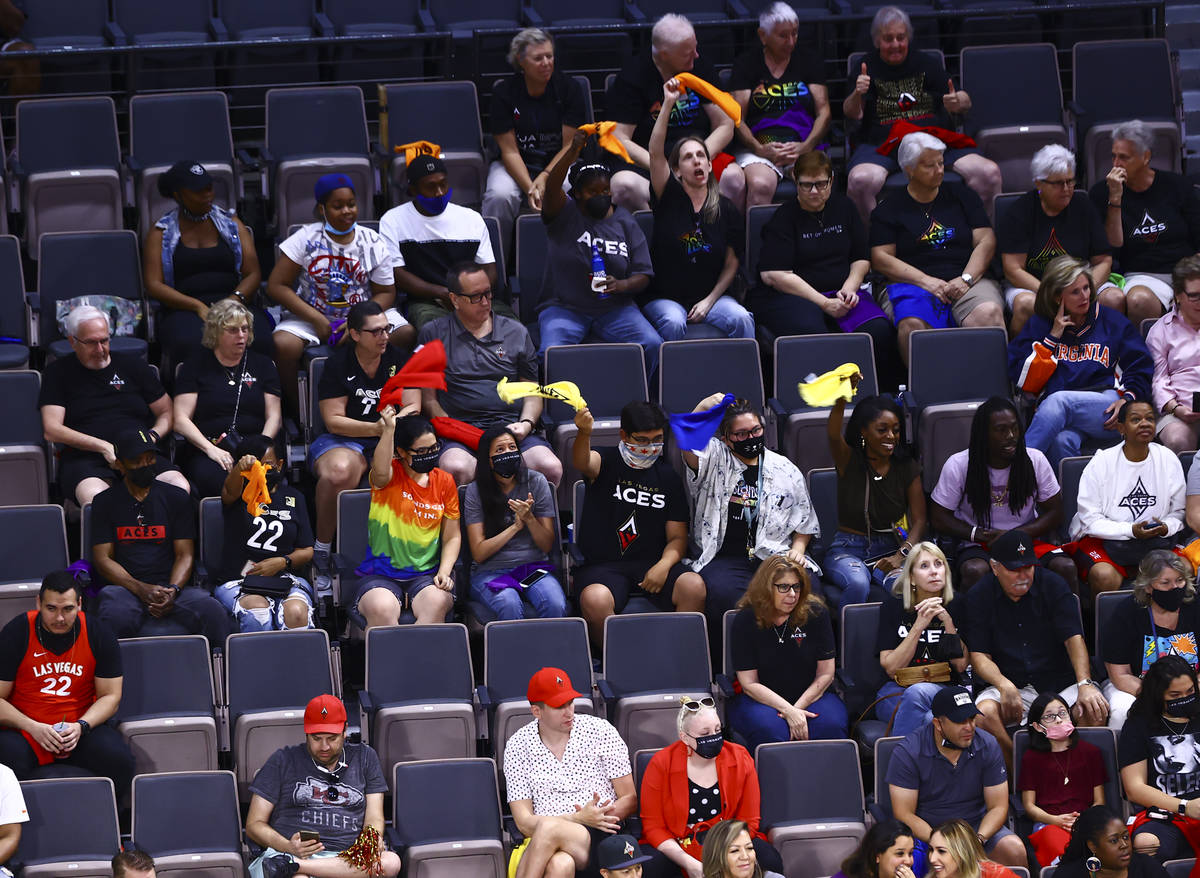 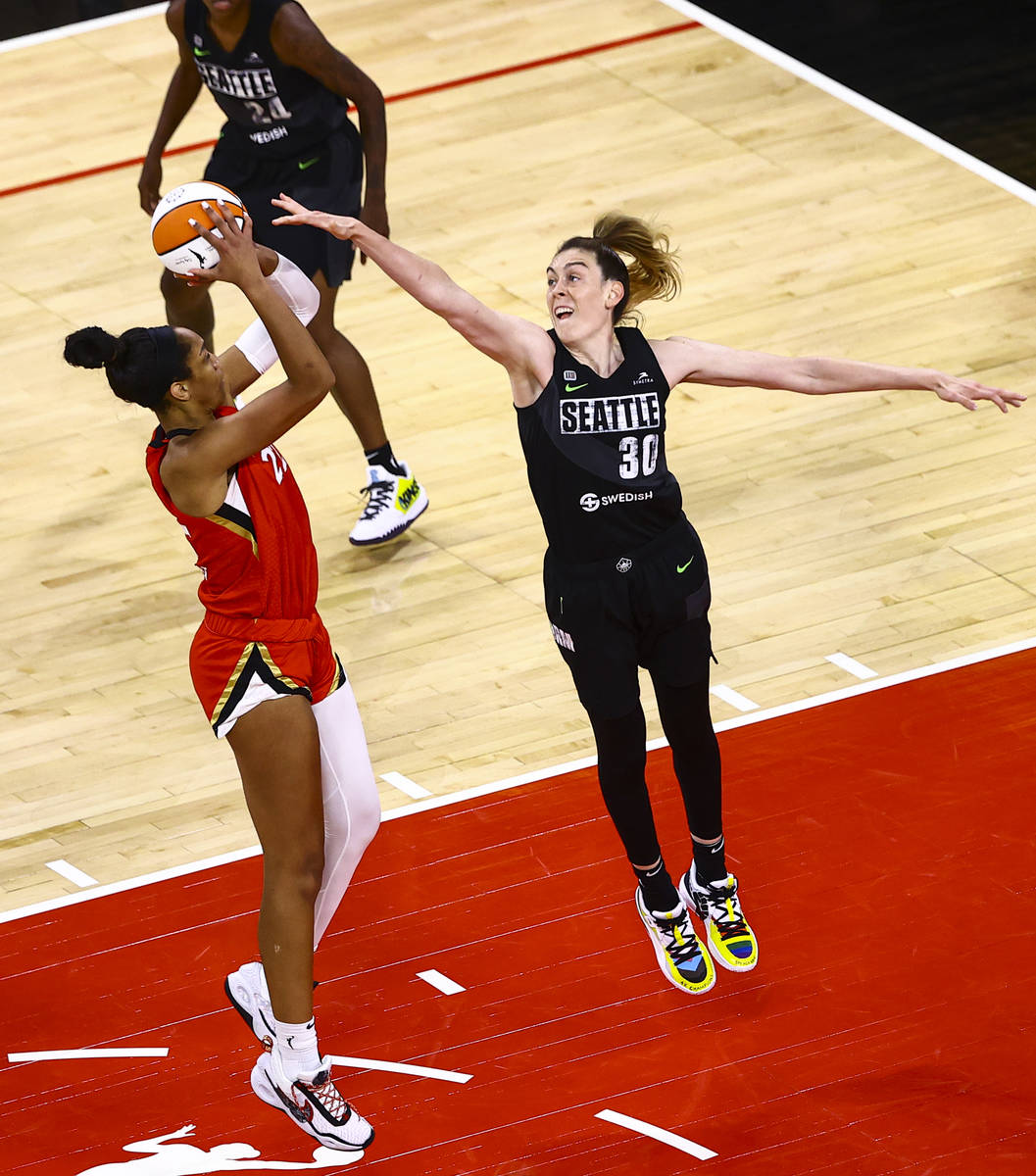 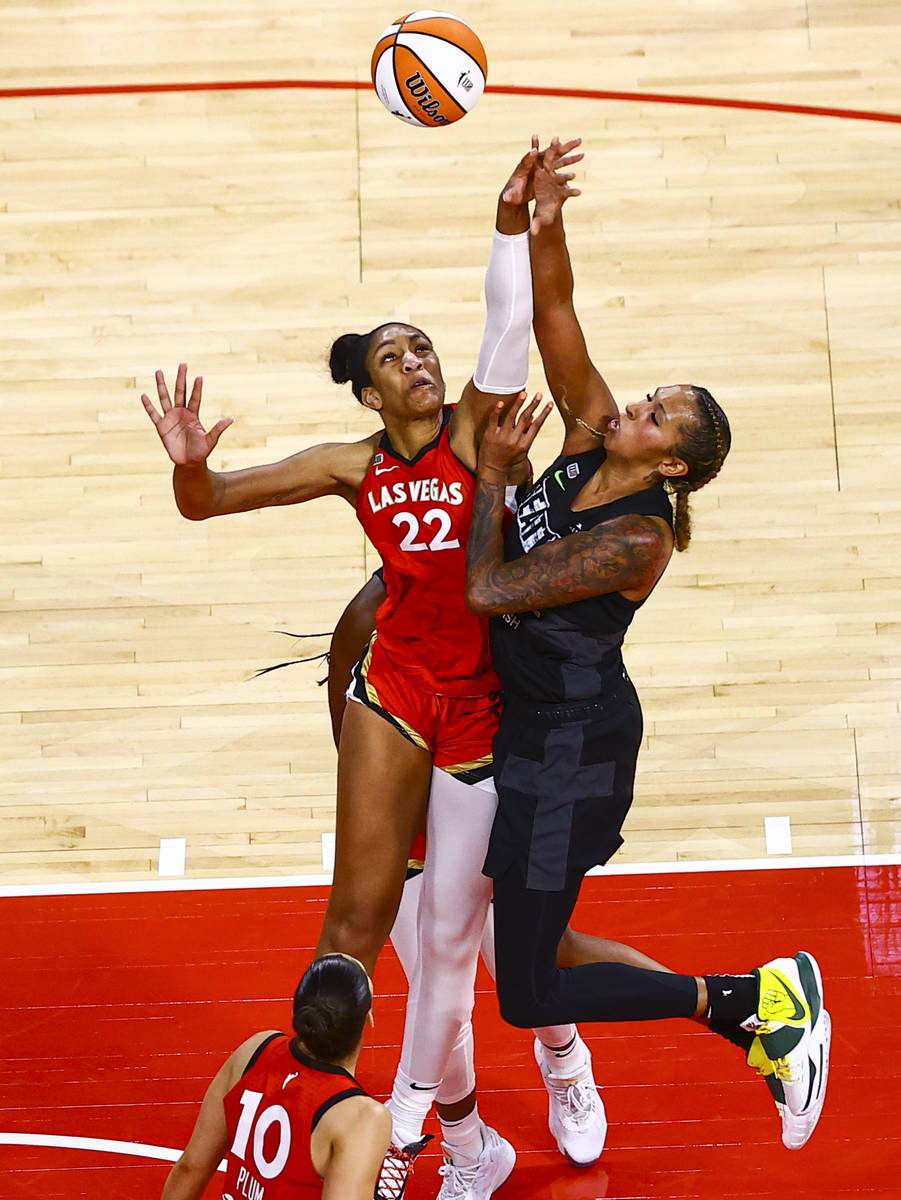 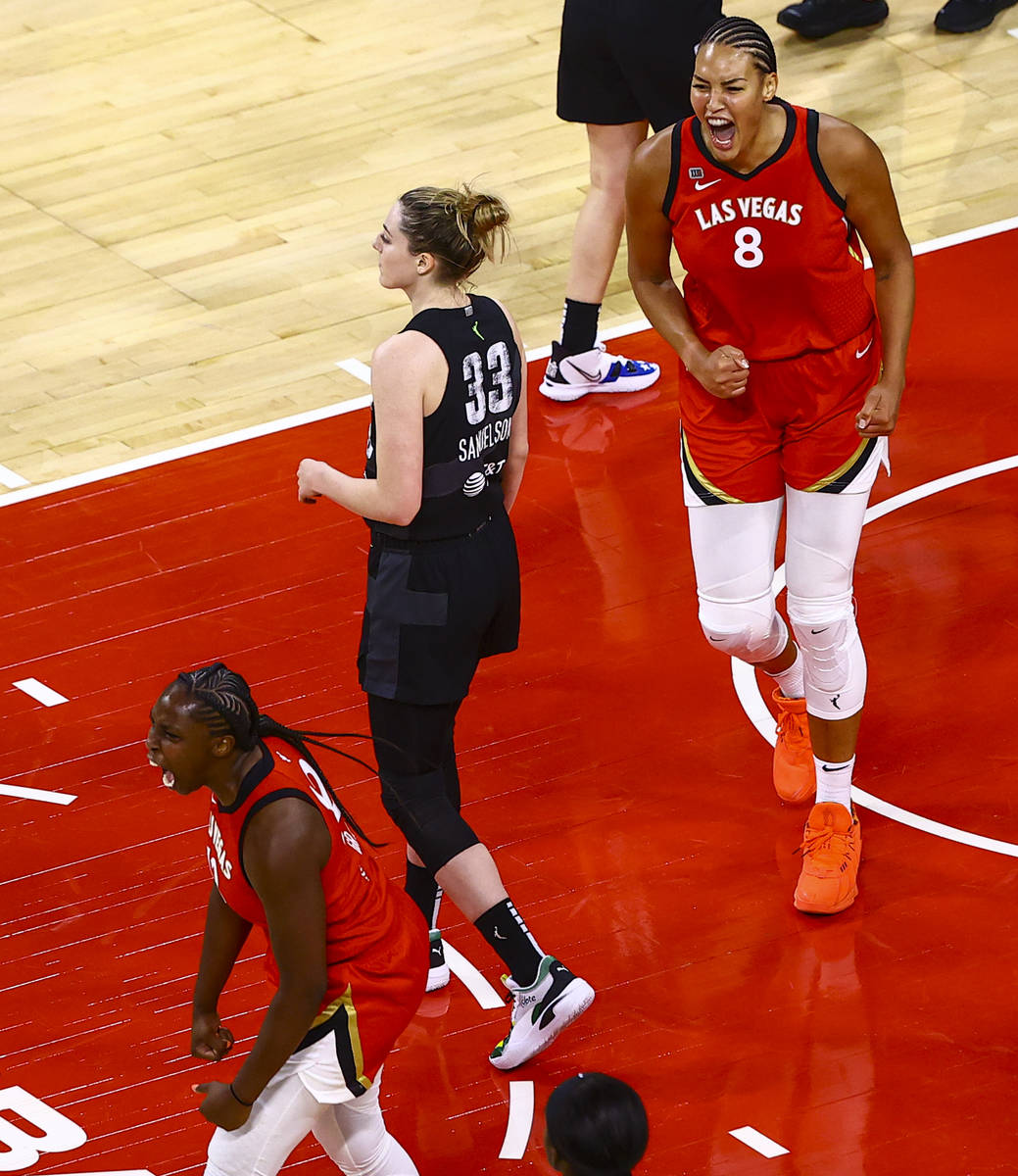 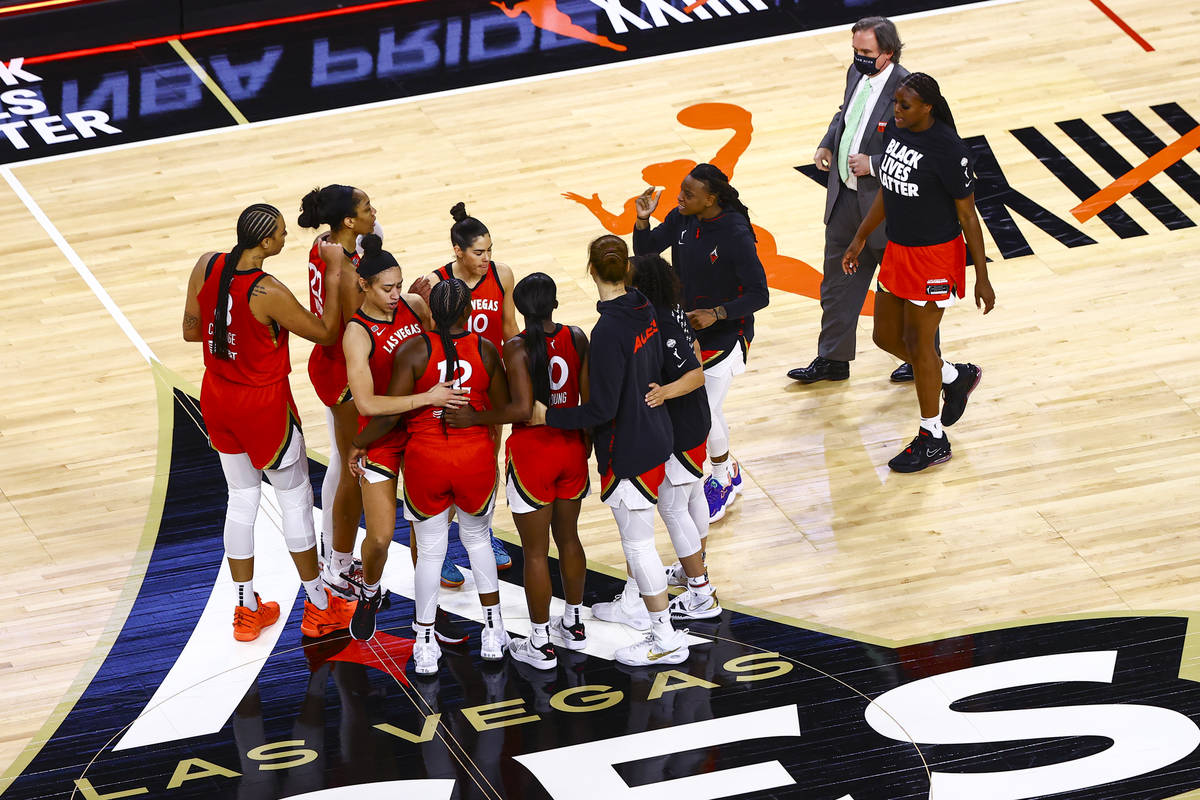 Aces coach Bill Laimbeer had been waiting all season for point guard Chelsea Gray to take command of a fourth quarter.

And after Gray did Sunday against the Seattle Storm to force overtime in a rematch of the WNBA Finals, he went one step further — deferring to her in the timeout huddle that preceded the most consequential play of Las Vegas’ season.

“Bill just asked me, ‘Where do you want the ball? What kind of play do you want to run?’” Gray said. “I said a mid pick-and-roll. … I just wanted to get to my sweet spot — whether I shot it or not.”

Gray ran that final pick-and-roll to perfection, drawing Storm superstar Breanna Stewart in a switch to set up her go-ahead jumper with 10.6 seconds remaining in overtime. Seattle point guard Sue Bird missed a 3-pointer on the ensuing possession, and Aces forward A’ja Wilson made two free throws to give Las Vegas a 95-92 victory before an announced crowd of 3,766 at Michelob Ultra Arena.

The Aces (11-4) won two of three in the season series against the Storm (12-4), who swept Las Vegas in October in the best-of-five championship series.

“That’s Chelsea Gray for you,” said Wilson, who had a team-high 22 points and 11 rebounds. “That’s just who she is, through and through.”

Wilson is a reliable closer in her own right, having powered the Aces to victories the past two years with crucial fourth-quarter plays. But Gray is a different kind of closer, equipped with the ball-handling brilliance needed to create her own perimeter shot in the most challenging situations.

It’s why the Aces signed her in February, Laimbeer said.

“To take over the game. To make big shots and big plays,” he said. “I’ve been waiting for that, and today was her stage.”

The Storm were in control through three quarters largely because of Stewart’s 35 points and 11 rebounds. But their 65-58 fourth-quarter lead vanished in an instant because of Gray’s savvy scoring and nifty playmaking ability.

The 28-year-old floor general probed the paint and either assisted on or scored the Aces’ first 12 points in the fourth quarter. Her baseline jumper with 1:20 to play gave Las Vegas an 83-82 lead. But Stewart tied the game with a layup after a Liz Cambage free throw, setting the stage for Gray’s heroics.

Gray also scored or assisted on seven of her team’s first nine points in overtime — no two more crucial than her go-ahead 18-footer.

“She’s the link that holds us together. She’s our point guard. She’s our leader,” Wilson said. “I trust her with the basketball with the last-second shot no matter what.”

Gray finished with 21 points and seven assists and was showered with “MVP” chants by a rowdy crowd that included Aces and Raiders owner Mark Davis. Kelsey Plum scored 15 and Riquna Williams and Jackie Young 12 apiece.

Las Vegas is a half-game behind Seattle for the No. 1 seed as the halfway point of the season approaches, and Laimbeer said the Aces “are right about where I thought we would be” as they work to solidify their identity.

“I think, come All-Star break, we’re really going to have a good handle on who we are,” Laimbeer said. “And then we’ll make some minor adjustments going forward.”