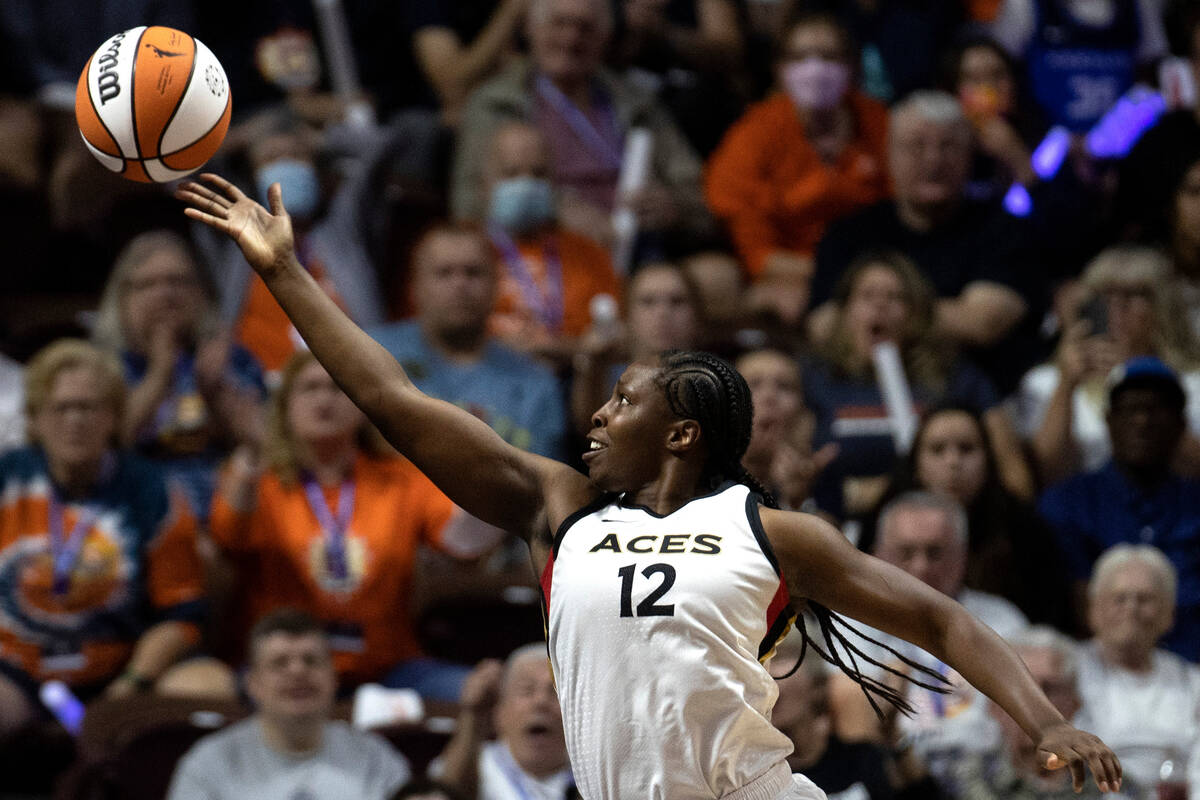 Las Vegas Aces guard Chelsea Gray (12) jumps to shoot during the first half in Game 4 of a WNBA basketball final series against the Connecticut Sun at Mohegan Sun Arena on Sunday, Sept. 18, 2022, in Uncasville, Conneticut. (Ellen Schmidt/Las Vegas Review-Journal) @ellenschmidttt 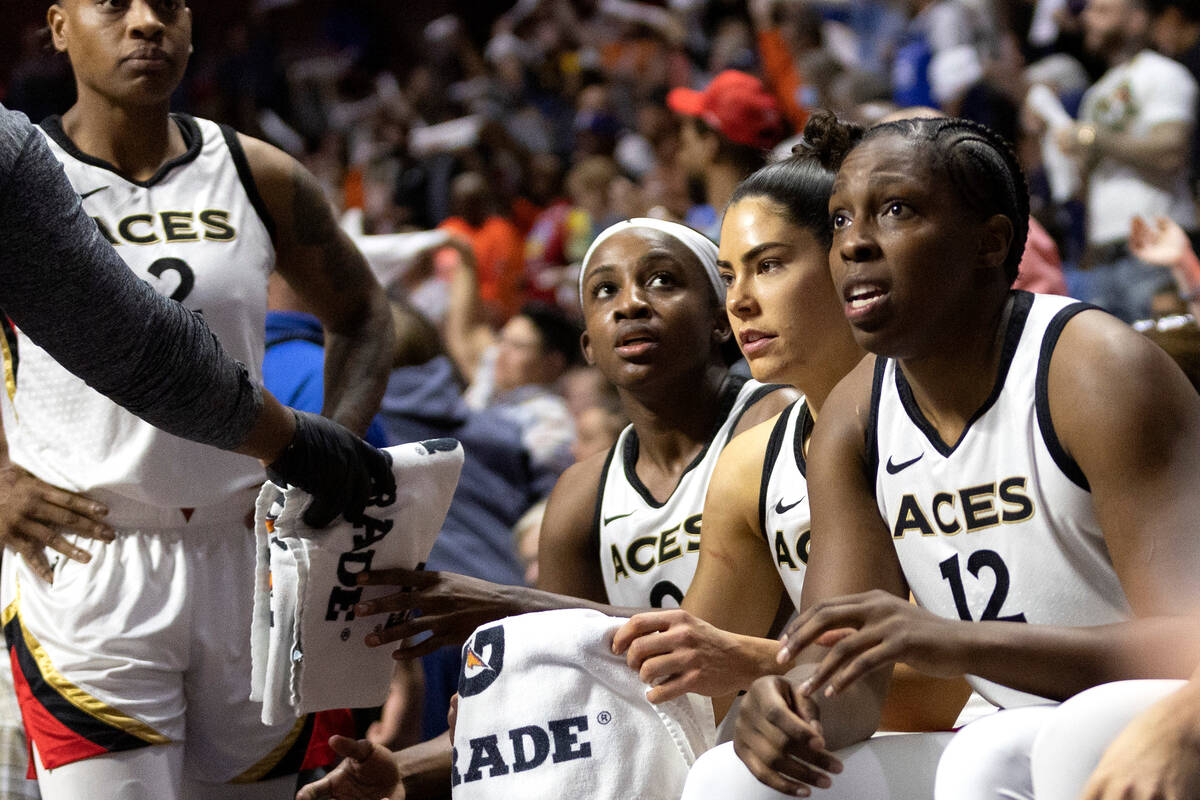 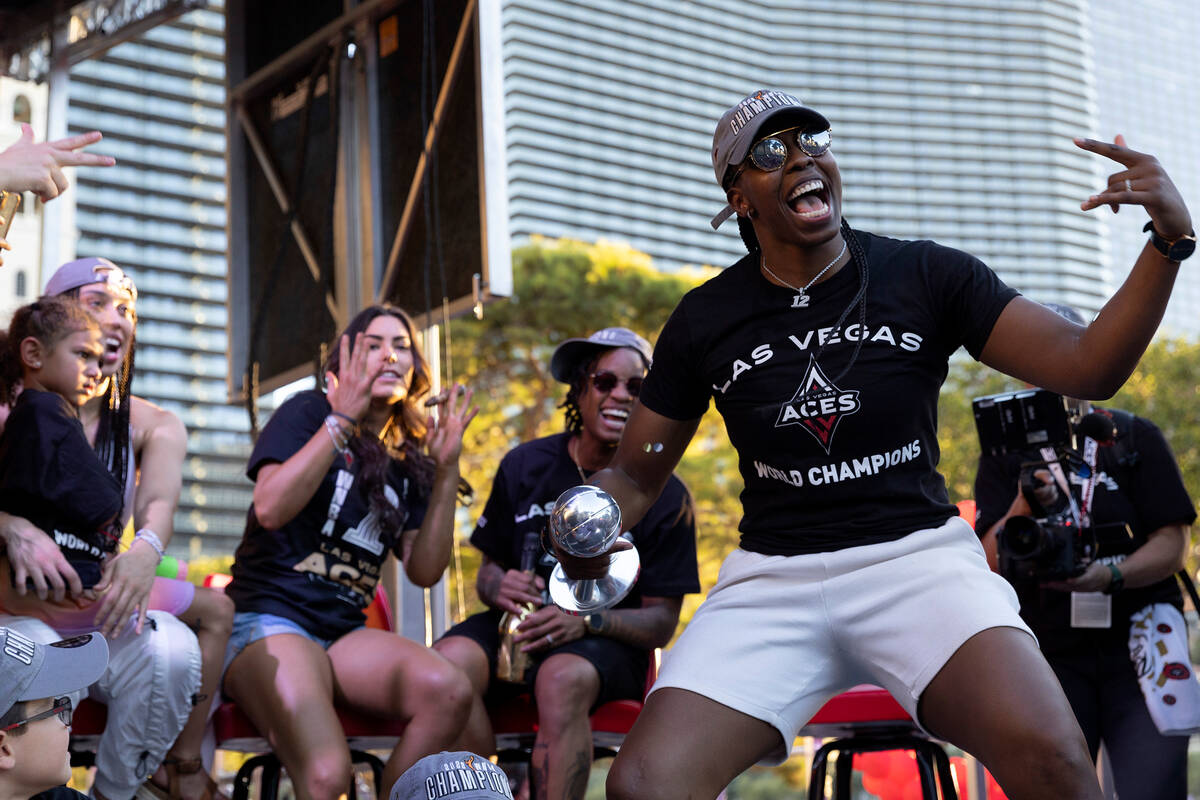 Las Vegas Aces guard Chelsea Gray, who won MVP for the WNBA Finals series, celebrates with the crowd during a parade for her team after they won the 2022 WNBA Championship, Tuesday, Sept. 20, 2022, on the Las Vegas Strip. (Ellen Schmidt/Las Vegas Review-Journal) @ellenschmidttt

Chelsea Gray can always get her teammates what they need.

Colson’s not just talking about basketball. Gray, the veteran point guard and 2022 WNBA Finals MVP, held several responsibilities for the Aces during their first championship season in franchise history.

She was the team’s play-making facilitator, calming presence, big-shot maker and late-game closer.

Yet, to her teammates, those duties pale in comparison to her other role — locker room DJ.

DJ 12 is one of Gray’s many aliases. Teammates and Aces fans call her the Point God. Coach Becky Hammon refers to her as the pick-n-roll professor. Aces All-Star Kelsey Plum routinely says Gray is the greatest point guard in the world, something she proved with her playoff and Finals performances.

Her proficiency at getting her teammates the ball is similar to her ability to always find the right vibe for the locker room. Technically speaking, anyone can play the team’s music, but Colson said a good DJ senses the feelings in the room to decide what songs to play next, something Gray excels at doing.

Gray takes great pride in navigating the team’s music preferences. She has several different playlists depending on the Aces’ attitude, but all of them have a few common denominators. City Girls, Young Dolph and Lil Baby are staples, and Gray, a Bay Area native, has to play some E-40.

To be clear, Gray played well for the first half of the season, as the Aces sprinted out to a 13-2 start. But the hot start wasn’t sustainable.

A humiliating 104-95 loss to the Chicago Sky on June 21, which set the WNBA record for largest comeback after the Aces blew a 28-point lead, sent the team into a downward spiral. Including the defeat to the Sky, the Aces lost five of their next seven games, mainly due to poor defense and selfish offense.

All season, Hammon preached that winning would bring recognition for individual play. Losing cost the Aces some of that praise, and Gray paid the personal price.

Despite averaging 12.4 points, six assists, 3.1 rebounds and shooting 45.5 percent from the floor during the first half of the season, Gray was the only Aces starter not selected to the July 10 All-Star Game.

“She got snubbed this year,” Plum said July 26. “It just sucks because I felt like we deserved five All-Stars. I know that’s not easy, but she’s a competitor. She leads our team. When we need plays down the stretch, Chelsea consistently makes big plays.”

Instead of traveling with Hammon, Plum, A’ja Wilson, Jackie Young and Dearica Hamby to Chicago for the All-Star Game, Gray spent her midseason break with her brother and his fiance, avoiding social media and giving herself a mental reset for the second half of the season. She admits missing the All-Star Game also gave her an edge, a hunger to prove to people that she belonged.

Gray was having a challenging season off the court, too. The point guard missed a game against the Los Angeles Sparks June 27 due to personal reasons. She had previously appeared in 178 consecutive games, the longest active streak in the WNBA.

During her postgame press conference after the July 26 Commissioner’s Cup Final, Gray revealed an important person in her life died during the season. She credited her teammates and her family for supporting her through the difficult period.

“My teammates have been there for me along the whole journey, constantly checking in,” she said. “I’ve had basketball and I’ve had them.”

Gray’s reset showed almost immediate dividends. Her scoring leaped from 12.4 points per game before the All-Star break to 15.8 points after June 10. Her field-goal percentage rose to 54.3 percent, but her biggest improvement was her 3-point shot.

Gray scuffled from distance during the first half of the season, shooting just 29.1 percent. She made 40 percent of her 3s after the All-Star break.

“It’d be different if I’m going through the slump and I’m not taking the extra shots, I’m not watching the extra film,” Gray said. “But I know for a fact that I was doing that.”

Gray’s passing continued to torch defenses, too. She averaged a career-high 6.1 assists per game in 2022, the second-greatest passing season in franchise history. She also set a new Aces record for assists in a single season with 212, passing Hammon, who played for the franchise when it was the San Antonio Silver Stars.

Gray’s August was even better. She averaged 20.7 points and made 59 percent of her field goals, while sinking 43.5 percent of her 3s during six games. Her August barrage was just a preview of her upcoming playoff exploits.

“When you have your point guard that locked in, you have no choice but to do the same and follow behind her,” Wilson said.

Gray picked up another title during the Aces’ 2022 championship run. It’s one that will follow her for the rest of her career: Finals MVP.

The award capped off one of the greatest playoff performances in WNBA history. In 10 games, Gray averaged 21.7 points, second in Aces playoff history. She scored in double figures every game and had at least 20 points seven times. Gray made 61.1 percent of her field goals and 54.4 percent of her 3s while also averaging seven assists per game.

“I’ll take Chelsea Gray, any day, on my team at any moment of the game,” Hammon said.

Her Game 4 showing helped Gray capture the Finals MVP award. But for the eighth-year veteran, whose game and importance have gone under the radar in the recent past, recognition is a reward, not a motivation.

“It’s nice to get noticed now,” Gray said, “but I’ve been consistent.

“I’ve been true to myself.”