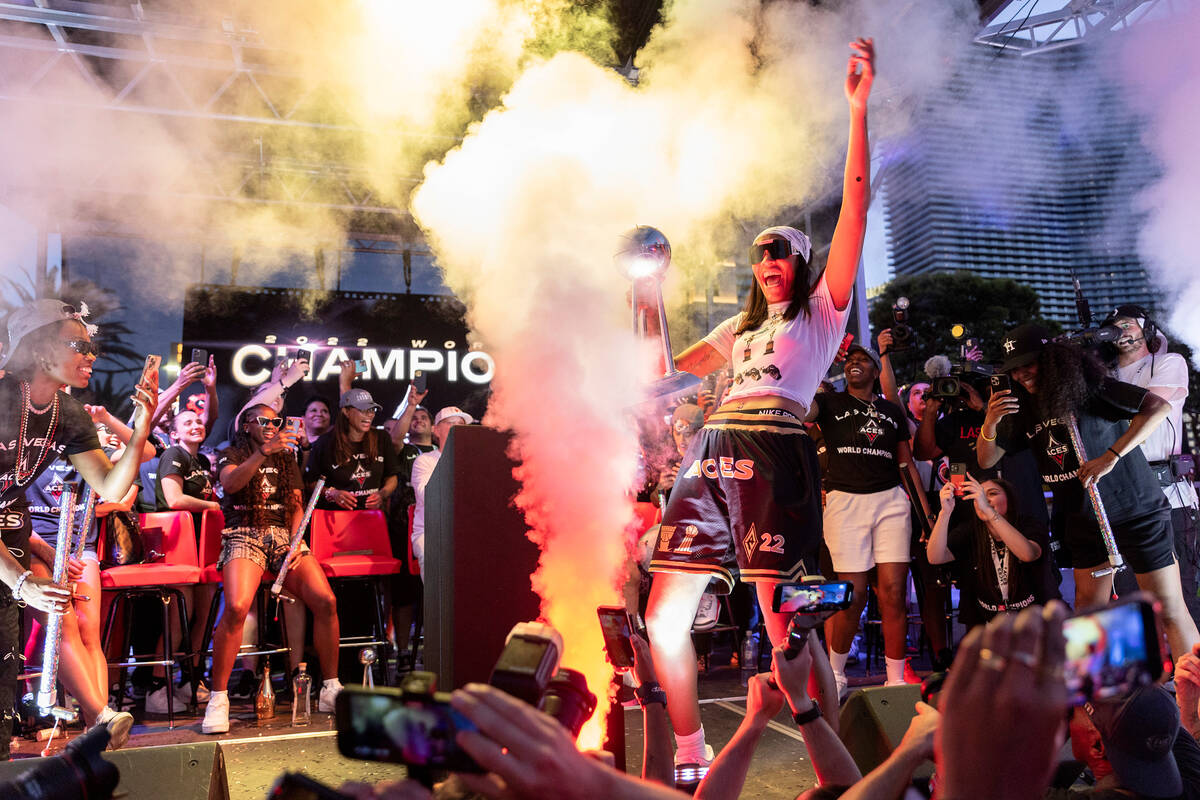 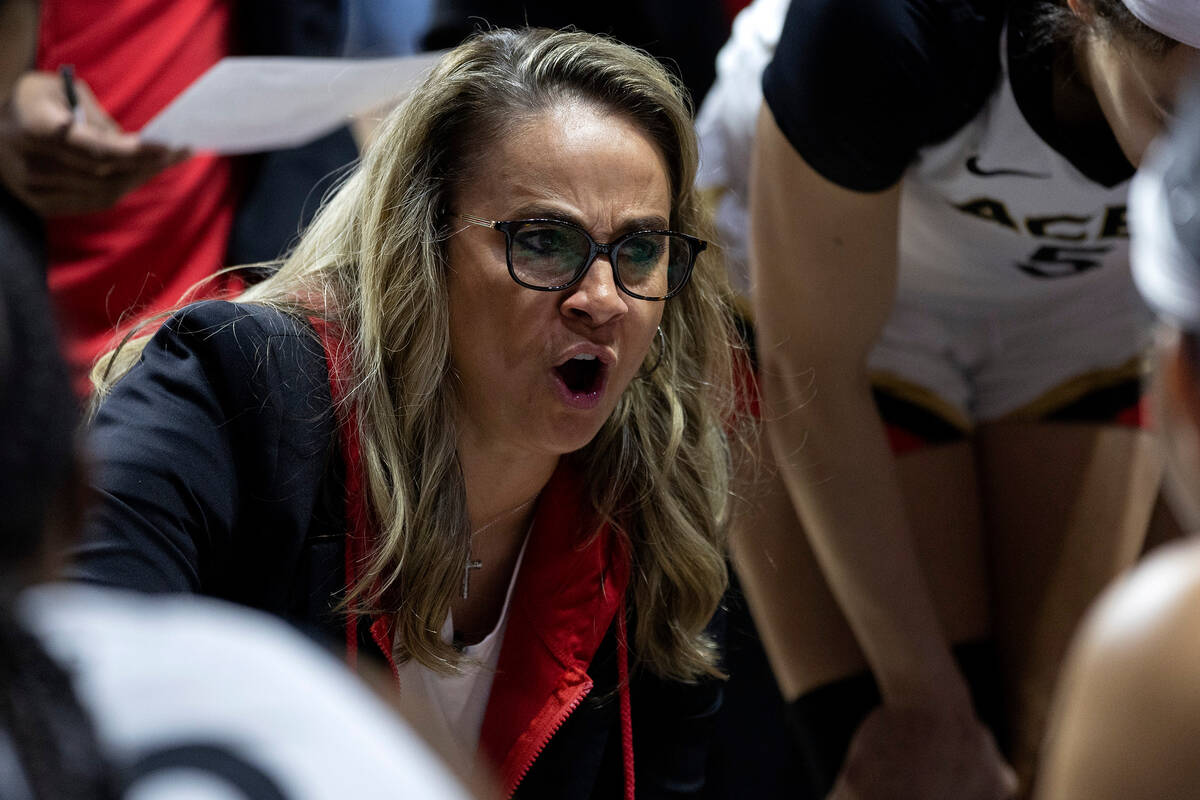 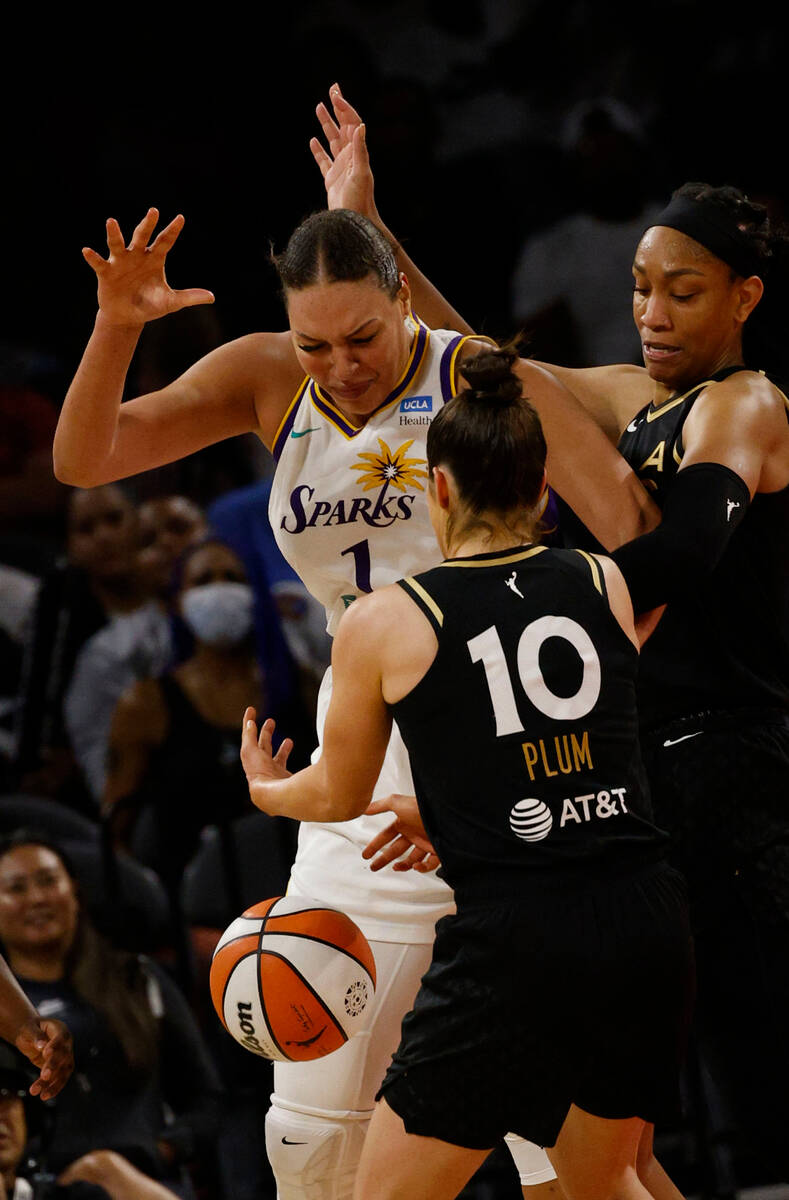 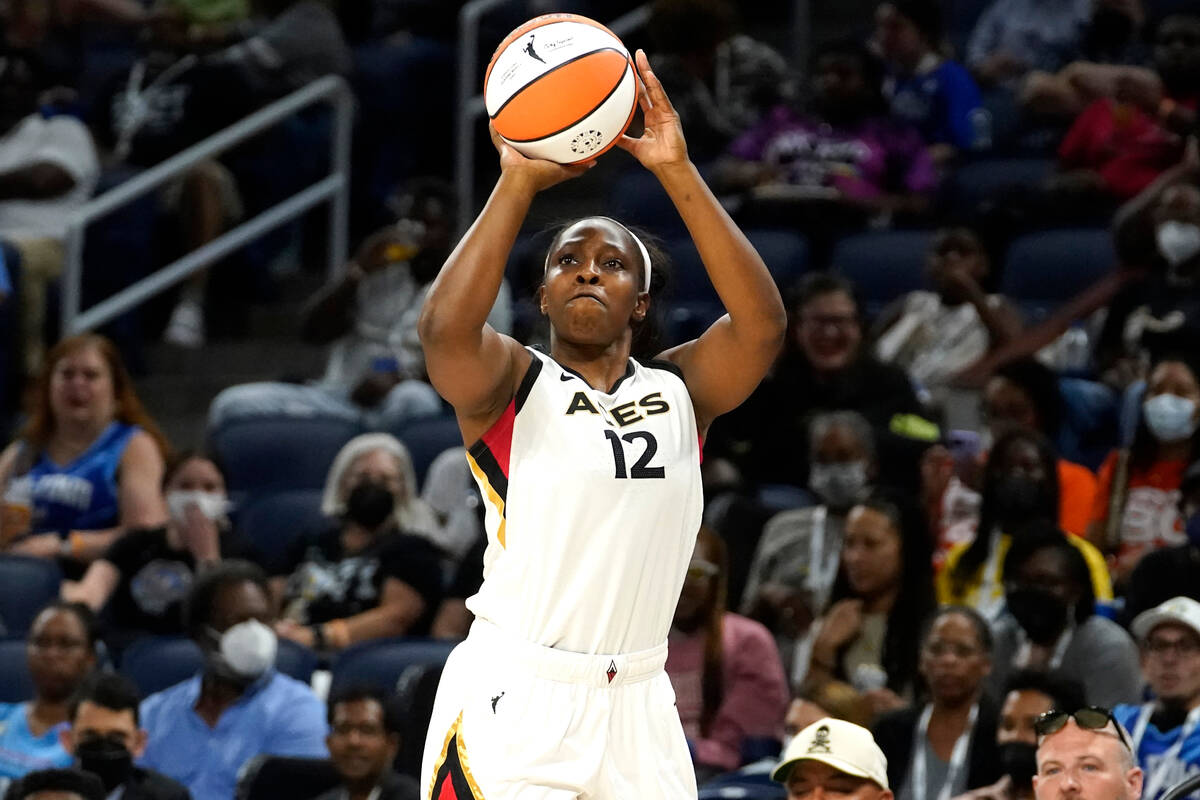 Las Vegas Aces' Chelsea Gray shoots during the first half of the WNBA Commissioner's Cup basketball game Tuesday, July 26, 2022, in Chicago. The Aces won 93-83 and Gray was named MVP of the game. (AP Photo/Charles Rex Arbogast) 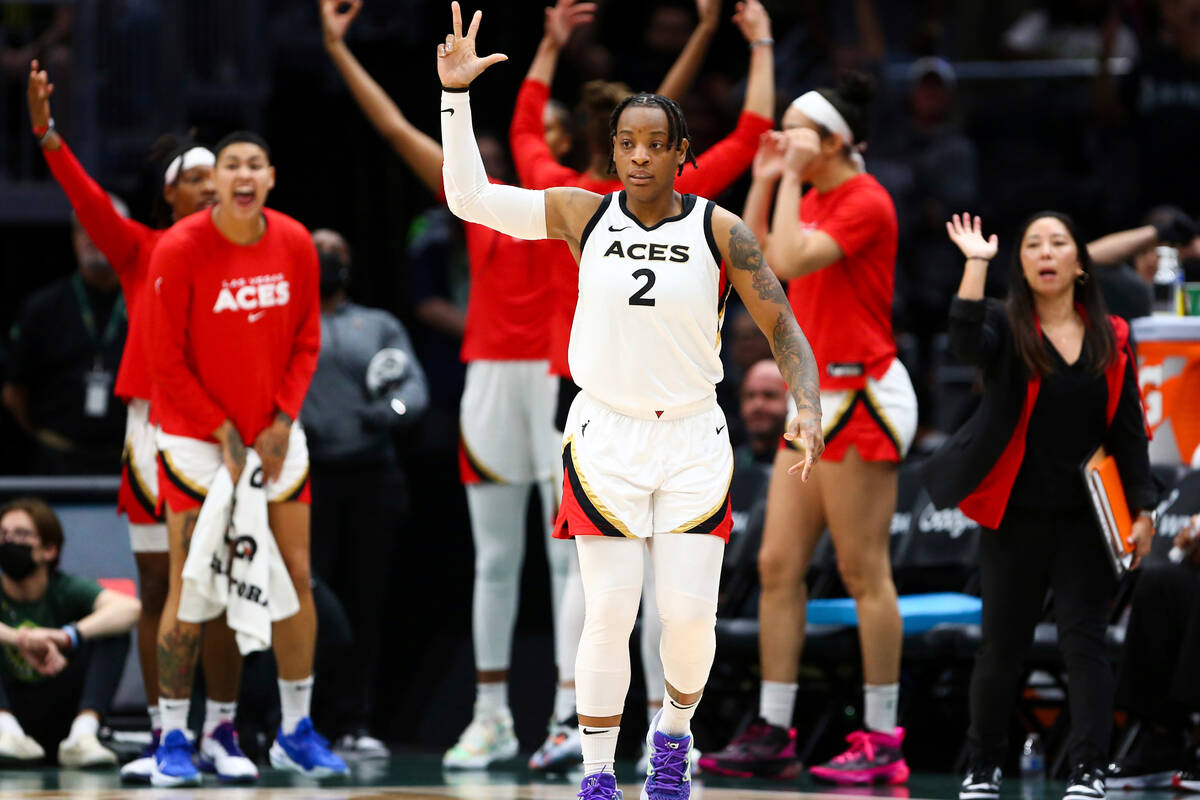 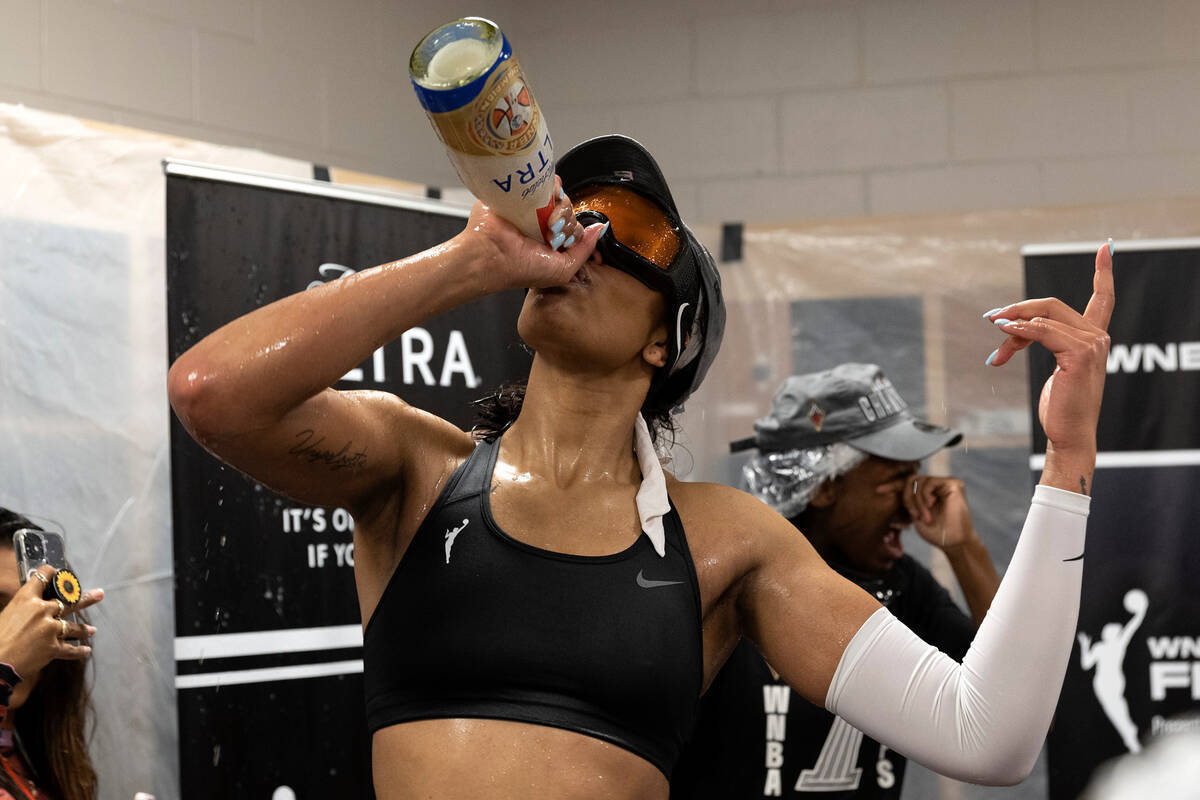 The Aces’ goals were clear from the beginning.

This team was championship or bust, with a new coach, a starting five loaded with talent and a franchise desperate for its first banner.

A new championship banner was never a guarantee for the Aces.

They had to grow and adapt before they could hoist the trophy at Mohegan Sun Arena.

Here are the five key moments on the Aces’ path to a championship:

Ahead of the season opener, there were lots of questions surrounding the Aces and Hammon.

The first-year coach promised a perimeter-oriented offense, but how was that going to work in the more post-centric WNBA? Kelsey Plum thrived in a limited role off the bench in 2021. What was her role going to be under Hammon? Were the Aces too small with A’ja Wilson as the team’s primary center?

Their first game also provided a familiar opponent. The Phoenix Mercury went to the Finals in 2021, knocking out the Aces to get there. Though they were missing Brittney Griner, the Mercury still had stars like Skylar Diggins-Smith and Diana Taurasi. They added 2021 scoring champion Tina Charles in the offseason.

The Aces answered any questions with authority, cruising to a 106-88 victory at the Footprint Center in Phoenix to secure Hammon her first career win.

The Aces had already beaten the Los Angeles Sparks and former teammate Liz Cambage once, a 104-76 win May 23 in Las Vegas. However, Wilson was at her best when the Aces made the return trip to Los Angeles to play their first game at Crypto.com Arena.

She scored a season-high 35 points on 13-of-23 shooting. She also had 11 rebounds, two steals, four blocks and was a perfect 8 of 8 from the free-throw line to finish the game plus-25, leading the Aces to a convincing 89-72 win. Cambage scored six points and had six rebounds in 19 minutes for the Sparks.

The next few months illustrated the different directions the teams were heading. The Aces claimed their first franchise title. Cambage abruptly left the Sparks July 26, agreeing to a contract divorce after another loss to the Aces July 23. She did not appear again during the 2022 season.

Just to be clear, winning the Commissioner’s Cup itself isn’t the reason this moment makes this list.

The July 26 Commissioner’s Cup Final was another chance to play the reigning champion Chicago Sky, who’d embarrassed the Aces by mounting a WNBA-record 28-point comeback when the teams played June 21. The loss triggered the Aces’ midseason tailspin.

Gray shined during that game. In a preview of her WNBA Finals performance, she scored 12 of her 19 points in the second half and was named Commissioner’s Cup Final MVP as the Aces won 93-83. An emotional Gray, who’d just recently missed out on the All-Star Game, accepted the award before being mobbed by her teammates.

“It was a lot of emotion coming to a head,” Gray said postgame. “These teammates, they’re my dogs, man. They have my back, and I wouldn’t be holding that MVP trophy without them.”

Game 3 of the WNBA semifinals between the Aces and the Seattle Storm at Climate Pledge Arena in Seattle is possibly the greatest WNBA game ever played.

With the series tied 1-1 and both teams trying to land a knockout blow, the Aces trailed by four points with 11.3 seconds remaining.

Aces reserve Riquna Williams hit a 3 on an inbound play, then Charles — now on the Storm — missed two free throws. Wilson converted a layup to give the Aces a lead, but Storm legend Sue Bird nailed a corner 3 with 1.9 seconds remaining to seemingly win the game for Seattle.

Hammon then drew up another successful inbound play for Jackie Young, whose buzzer-beating layup sent the game to overtime, where the Aces ran away with a 110-98 win.

Closing out in Connecticut

After the thrills of the WNBA semifinals, the WNBA Finals seemed dull in comparison.

The Aces stormed out to a 2-0 lead, but a humbling 105-76 loss in Game 3 cast doubt on the Aces’ championship hopes. Facing a Sun team who’d clawed their way back from the brink against the Sky in the semifinals, the Aces needed to avoid a winner-take-all Game 5.

“We knew it wasn’t going to be easy,” Hammon said.

They handled their business. Led by Gray, the WNBA Finals MVP, the Aces clinched a 78-71 win at Mohegan Sun Arena in Uncasville, Connecticut, to win the franchise’s first championship.

“Winning a championship is something that no one can ever take from you,” Wilson said. “And once you got that down, you are in the books forever.”