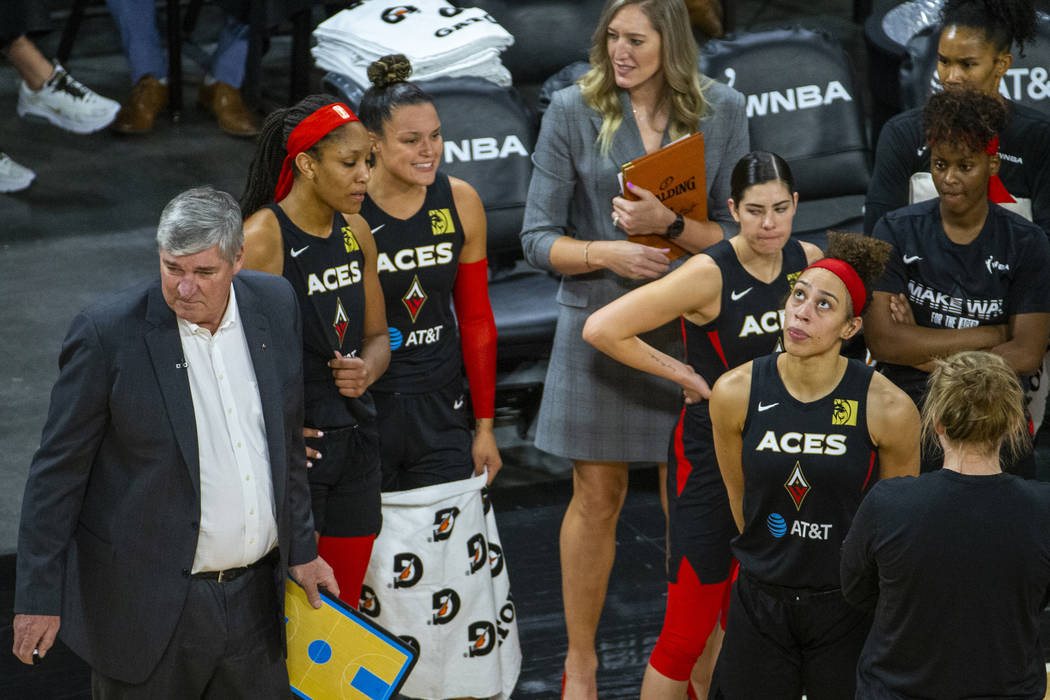 The Las Vegas Aces look dejected as they are down late versus the Washington Mystics during the second half of their WNBA playoff game at the Mandalay Bay Events Center on Tuesday, Sept. 24, 2019 in Las Vegas, Nevada. (L.E. Baskow/Las Vegas Review-Journal) @Left_Eye_Images 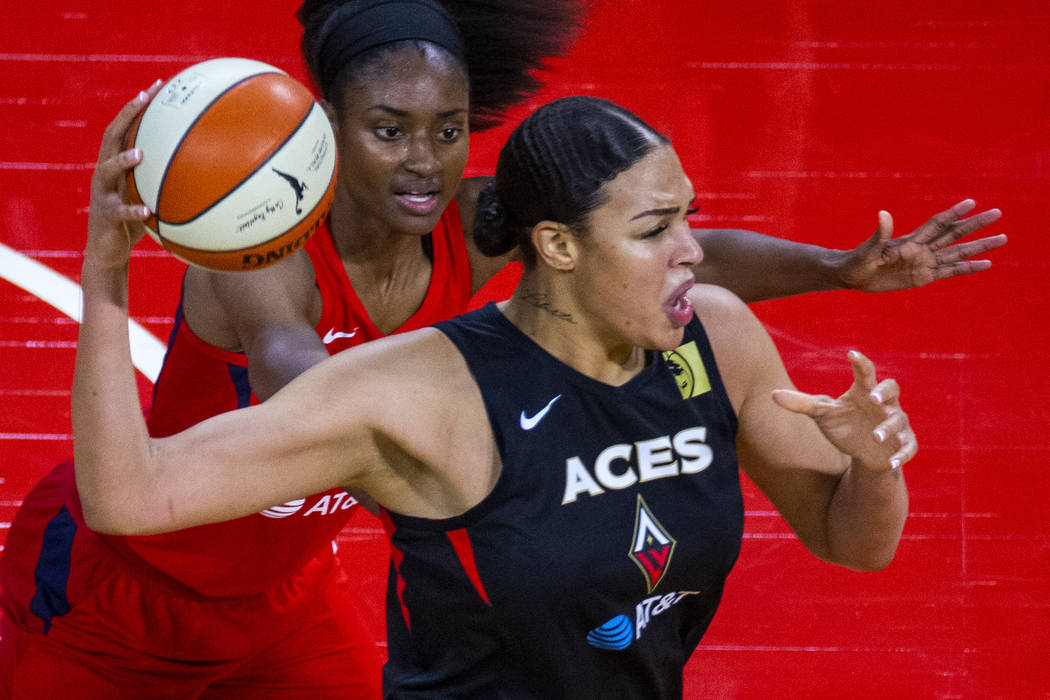 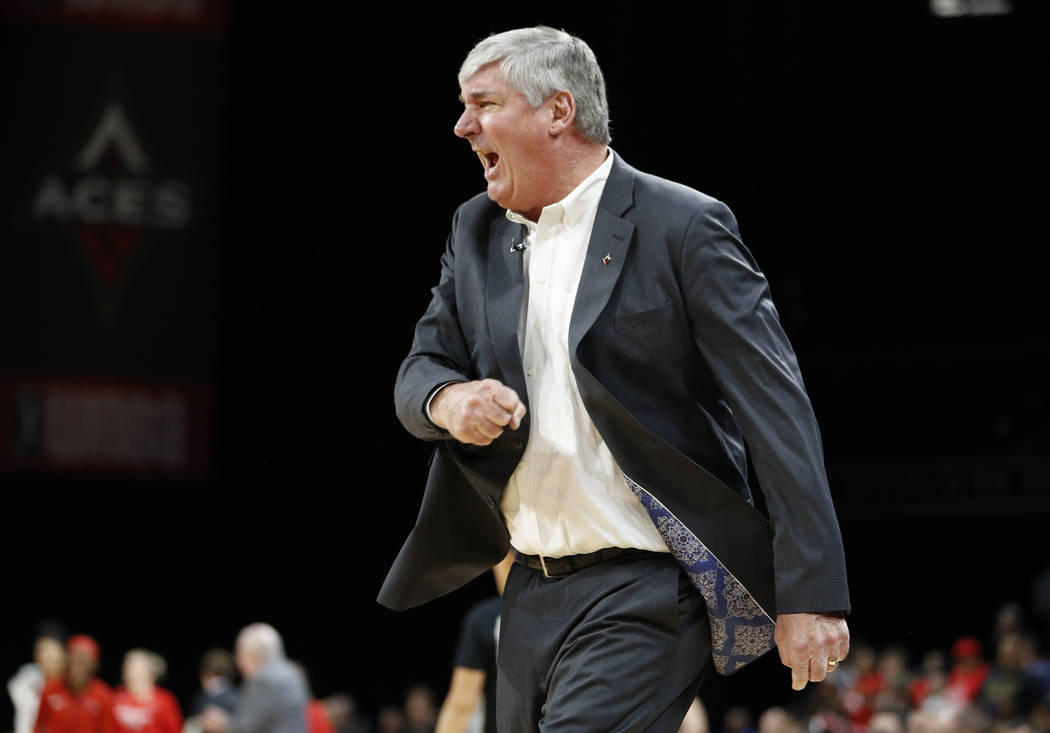 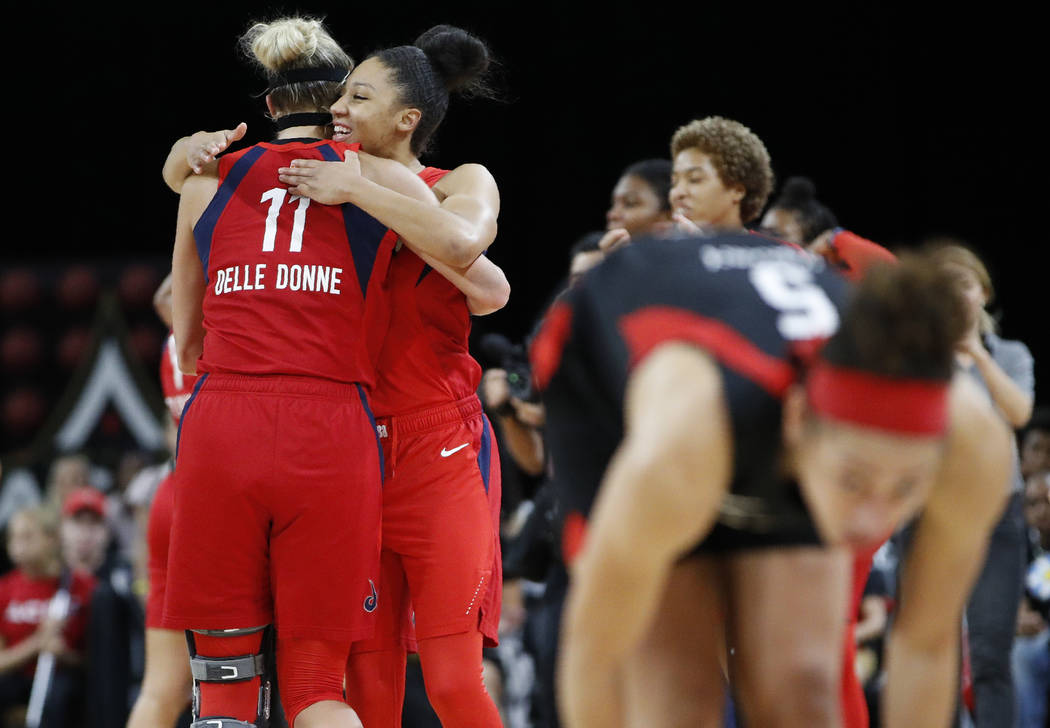 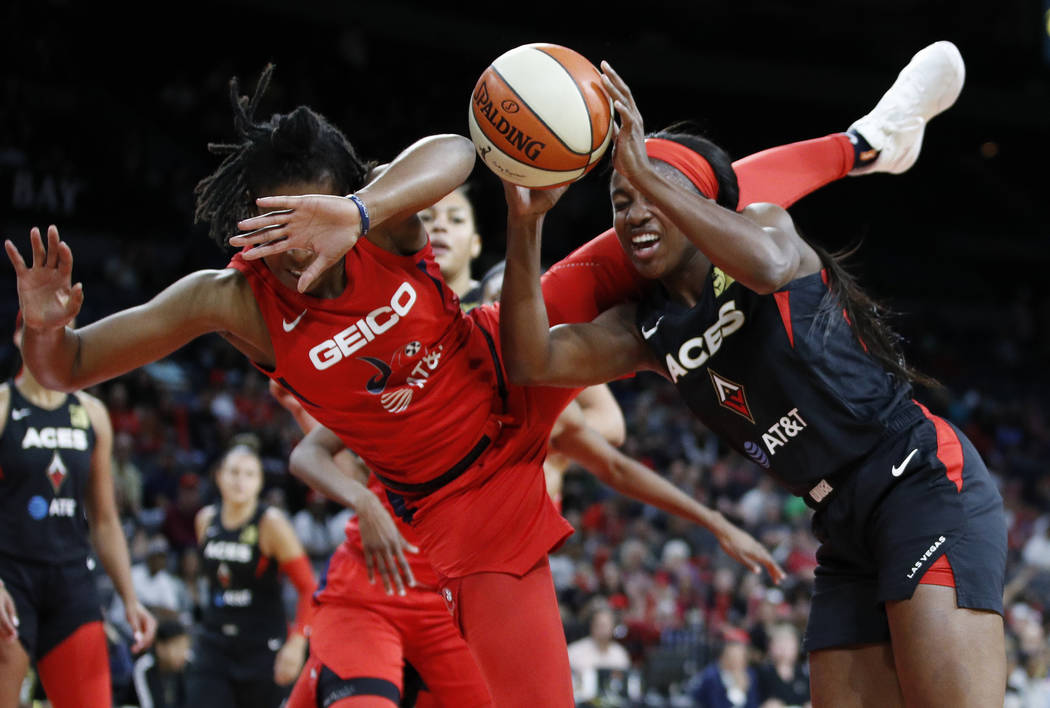 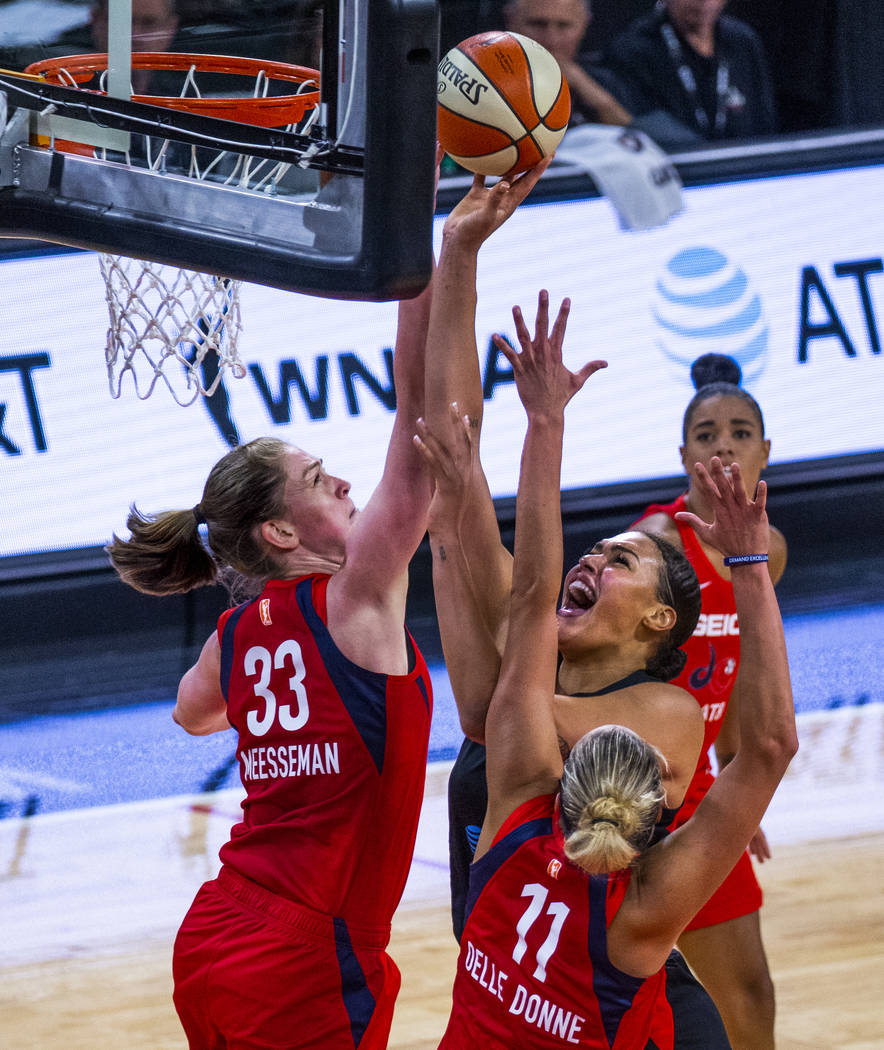 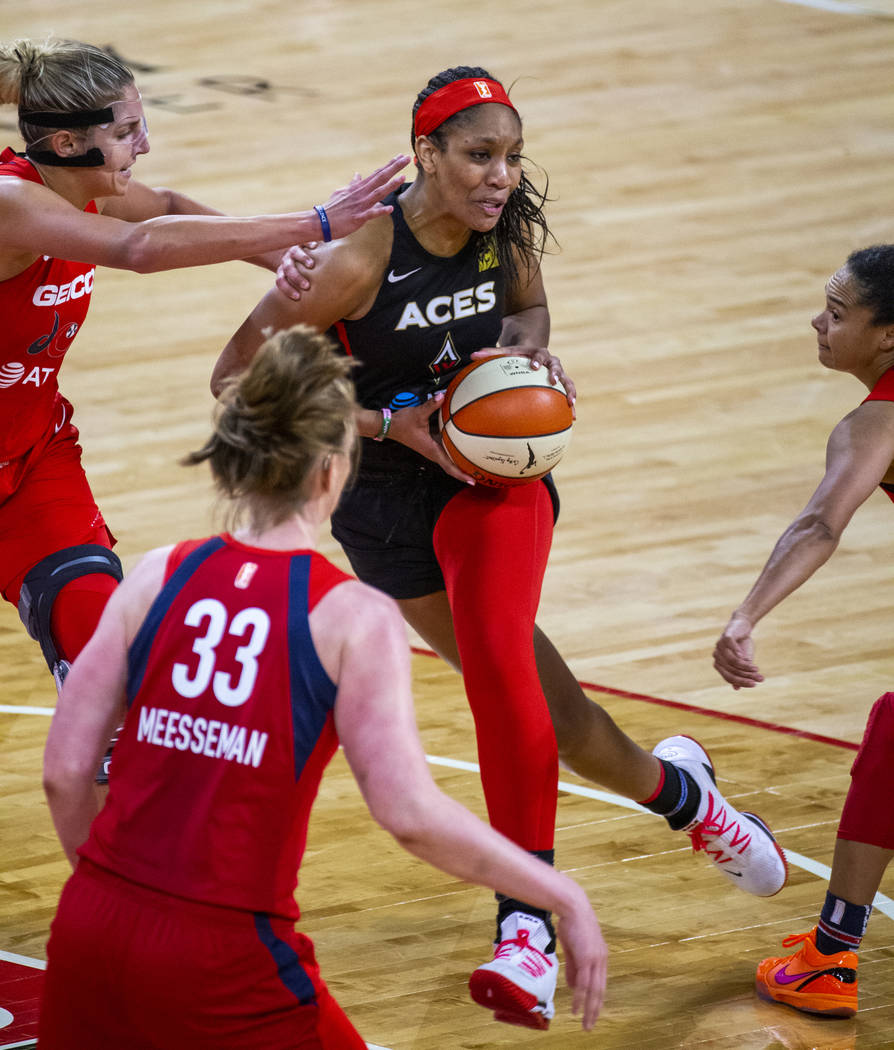 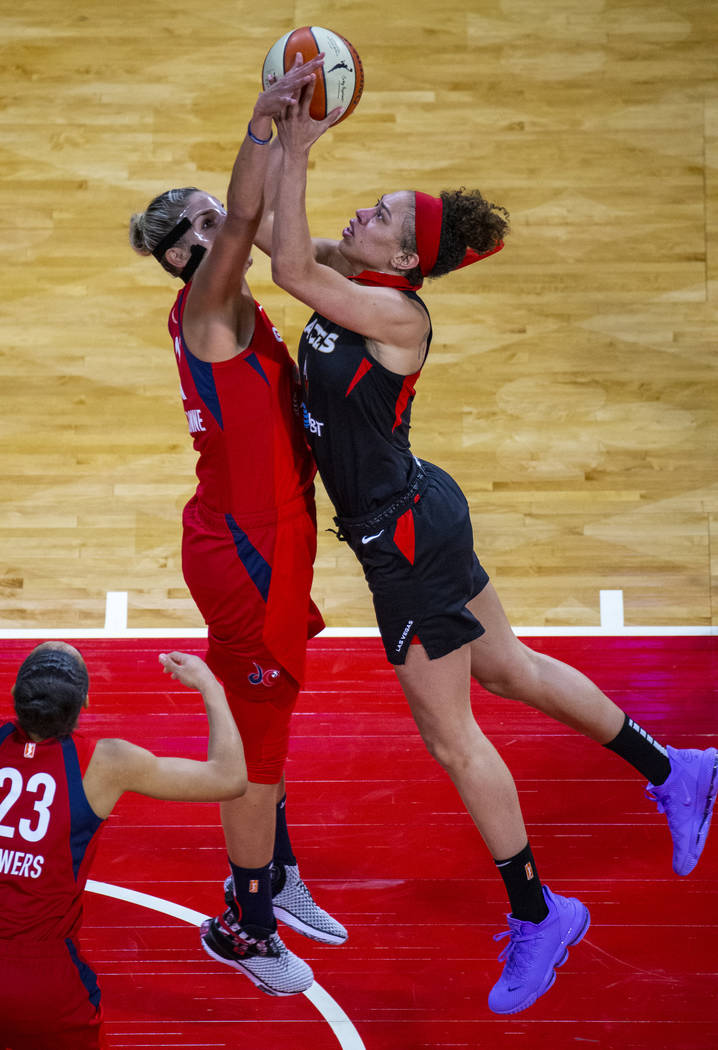 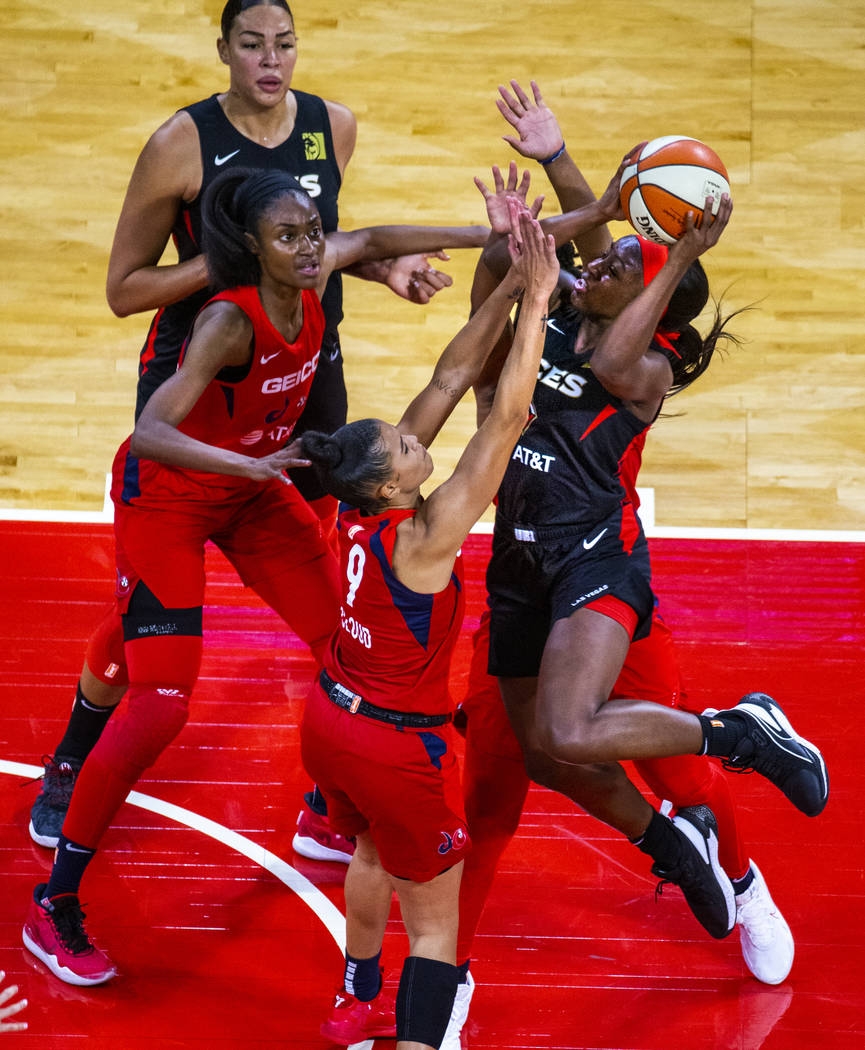 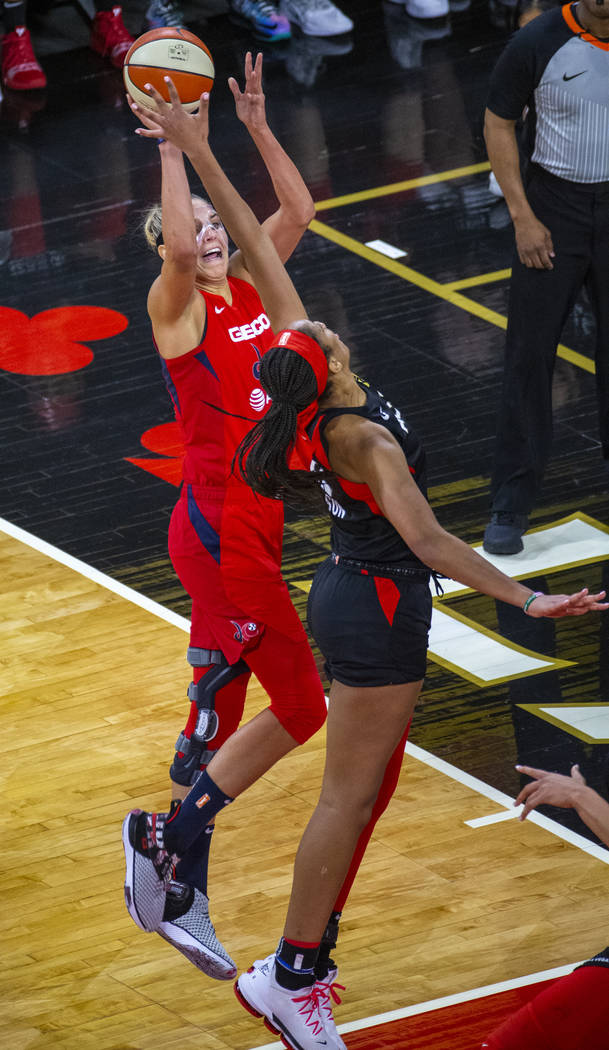 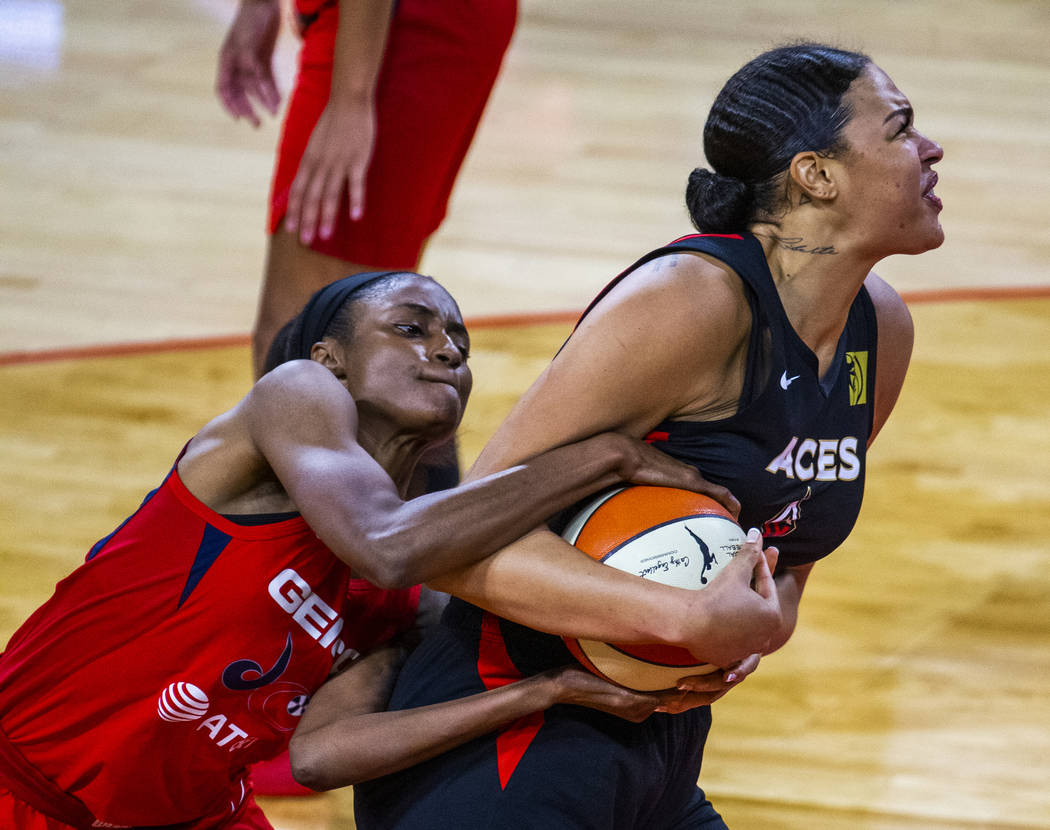 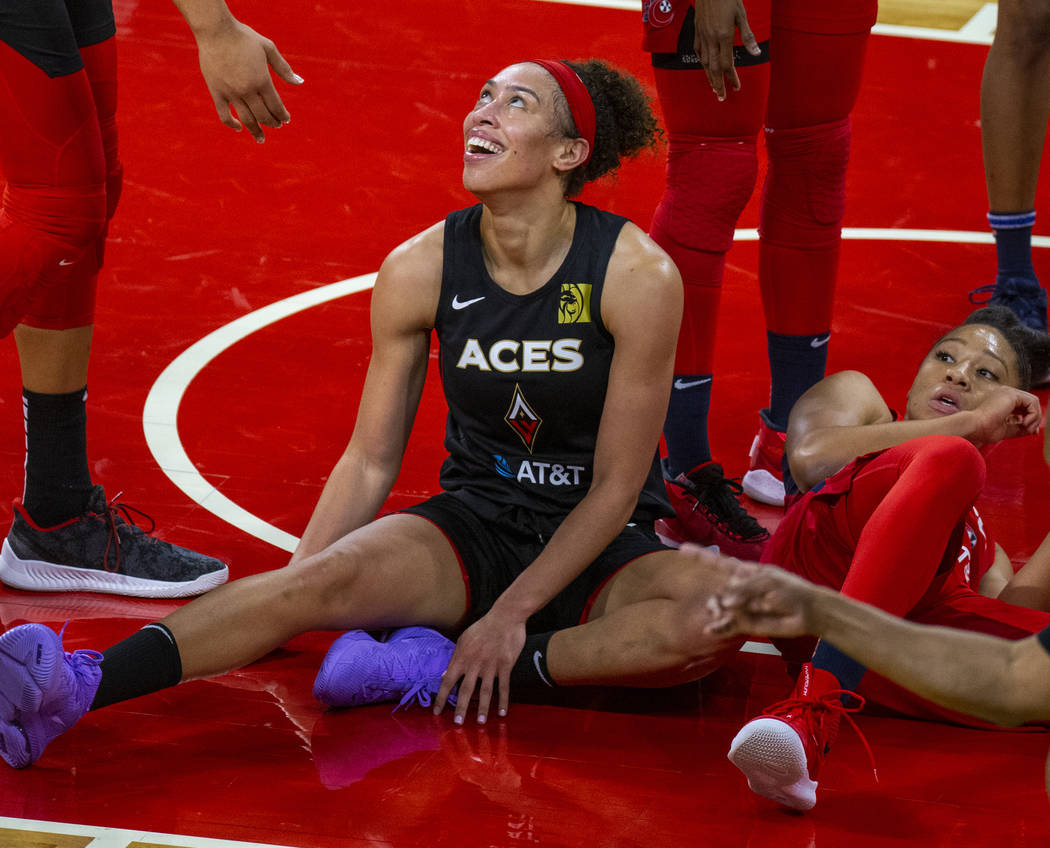 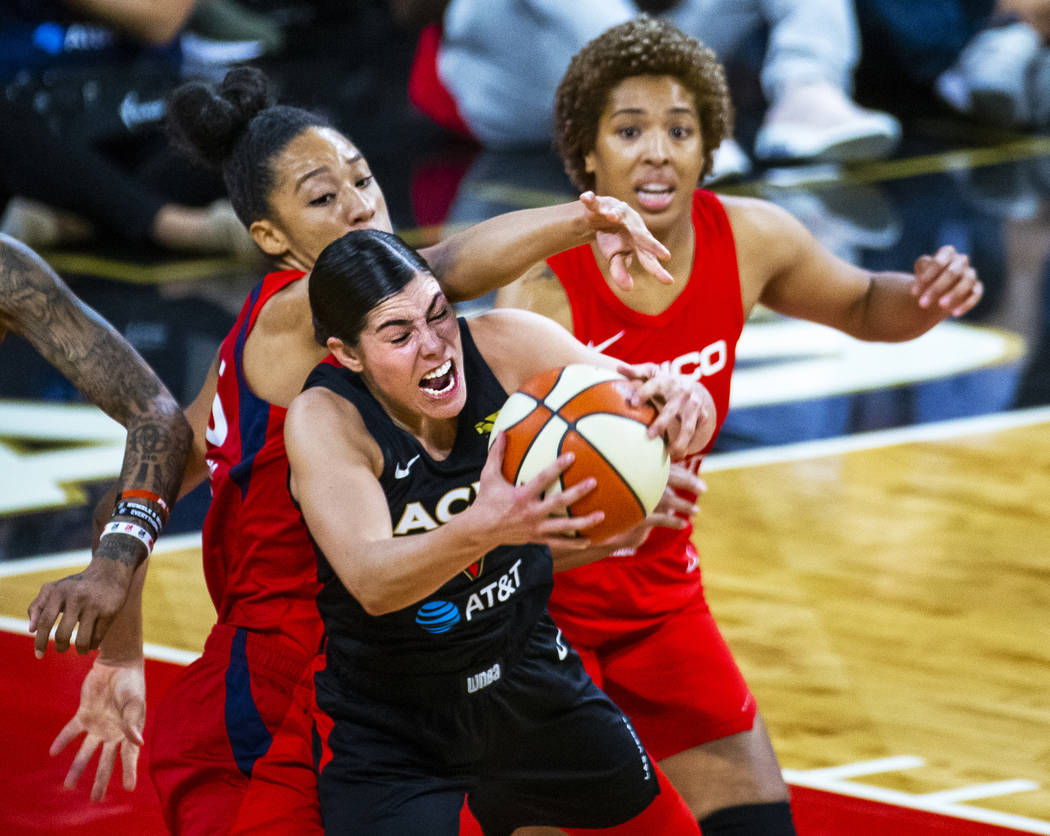 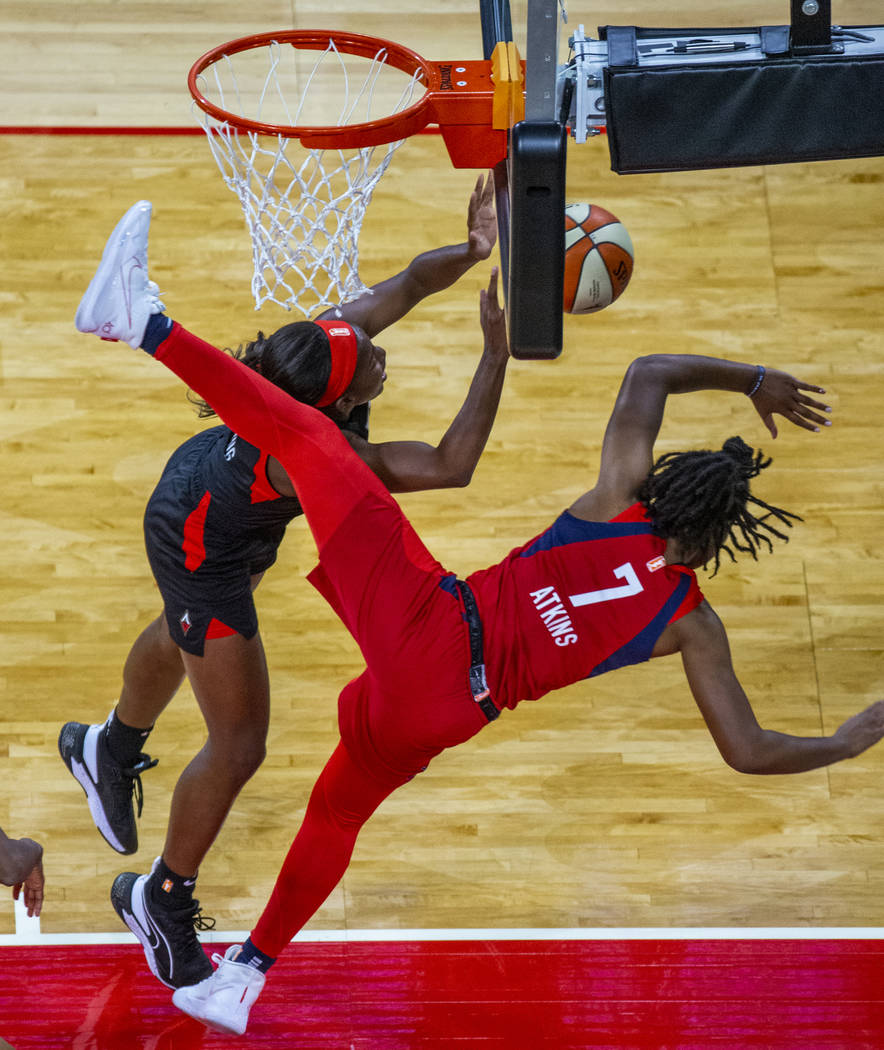 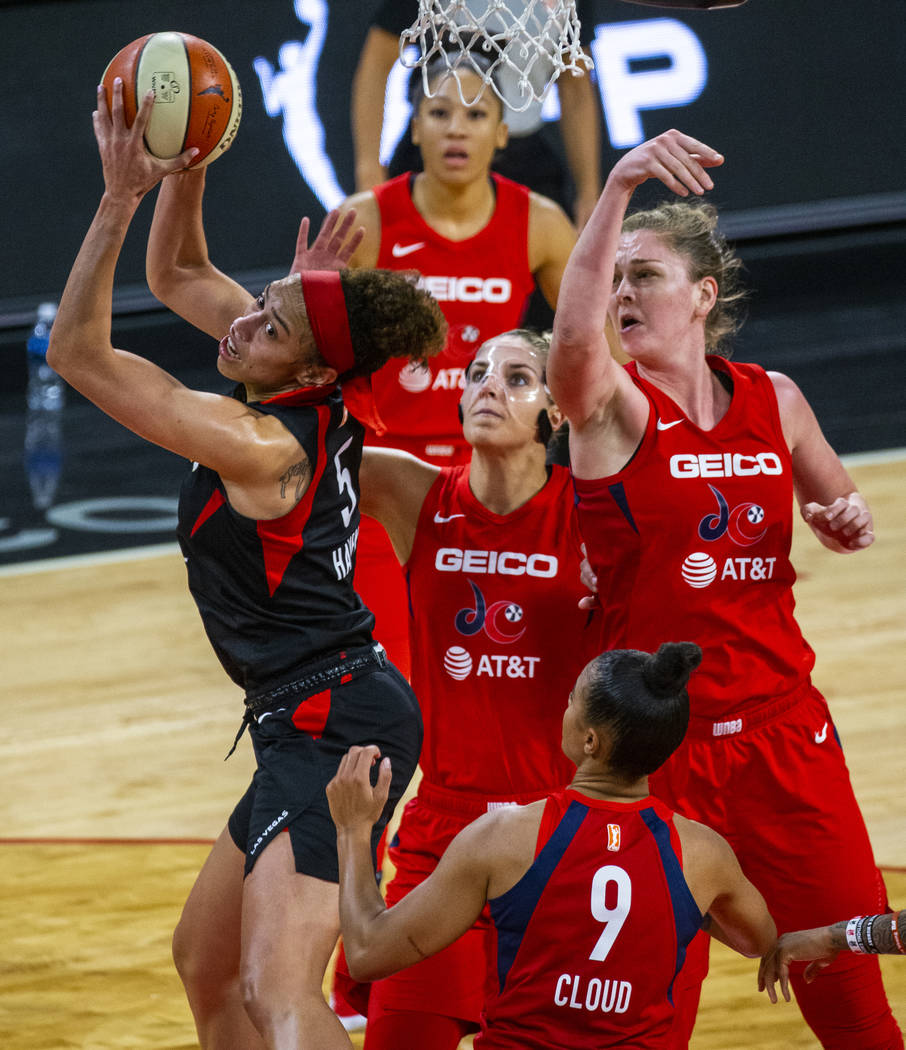 The short-term sadness after a season-ending 94-90 loss to the Washington Mystics didn’t dim the long-term optimism in the Aces’ locker room Tuesday night.

They’re young, talented and experienced now after reaching the WNBA semifinals before losing to the Mystics 3-1 in the five-game series.

“We know what we have to do now,” Aces forward A’ja Wilson said. “We understand how hard we have to play. We have to come back in with a different mindset but a better understanding of what it is we need to do.”

The Aces finished the regular season 21-13 and are expected to bring back the core that helped them become one of the WNBA’s best teams.

Time to briefly reflect on the 2019 season and what it means for the future.

The All-Star tandem of Liz Cambage and Wilson didn’t always click, but built more cohesion throughout the season and thrived for the most part against the Mystics. They’re too big, strong and skilled for most WNBA frontcourts.

Dearica Hamby had a breakout season as the Sixth Woman of the Year. She provided versatility on both ends of the floor while averaging career highs in points (11.0) and rebounds (7.6).

The Grade: A-. Plenty of productive. Chemistry will continue to improve.

All-Star guard Kayla McBride finished fifth in 3-point shooting among qualified shooters (42.8 percent). Kelsey Plum emerged in the playoffs as a dynamic lead guard with playmaking and scoring ability. Jackie Young was among the league’s best athletes as a rookie.

Plum struggled in the regular season but flashed the ability to create offense in pick-and-roll settings during the postseason and is a potential All-Star if she sustains that level of play. She averaged 15 points, 7.8 assists and shot 52.9 percent from 3-point range in five playoff games.

Young played the point for most of the regular season, but moved off the ball in the playoffs and is still raw as a scorer. She averaged 6.9 points on 32.2 percent shooting in the regular season and was hesitant to shoot or attack the basket.

The Grade: B-. Talent aplenty. Can be more consistent.

Cambage is an impending restricted free agent, but insisted Tuesday that she doesn’t want to play anywhere else. She can re-sign and join Wilson, McBride, Hamby, Plum and Young, who are under contract for next season.

Laimbeer said Tuesday that he intends on tweaking the roster. The Aces could stand to add more 3-point shooting and ballhandling on the perimeter. They made the fewest 3-pointers (5.5 per game) in the WNBA this season despite playing the second-fastest pace. Additional shooting could provide more spacing for Cambage, Wilson and Hamby in the paint.

Internal development will be more important than any free-agent acquisition.