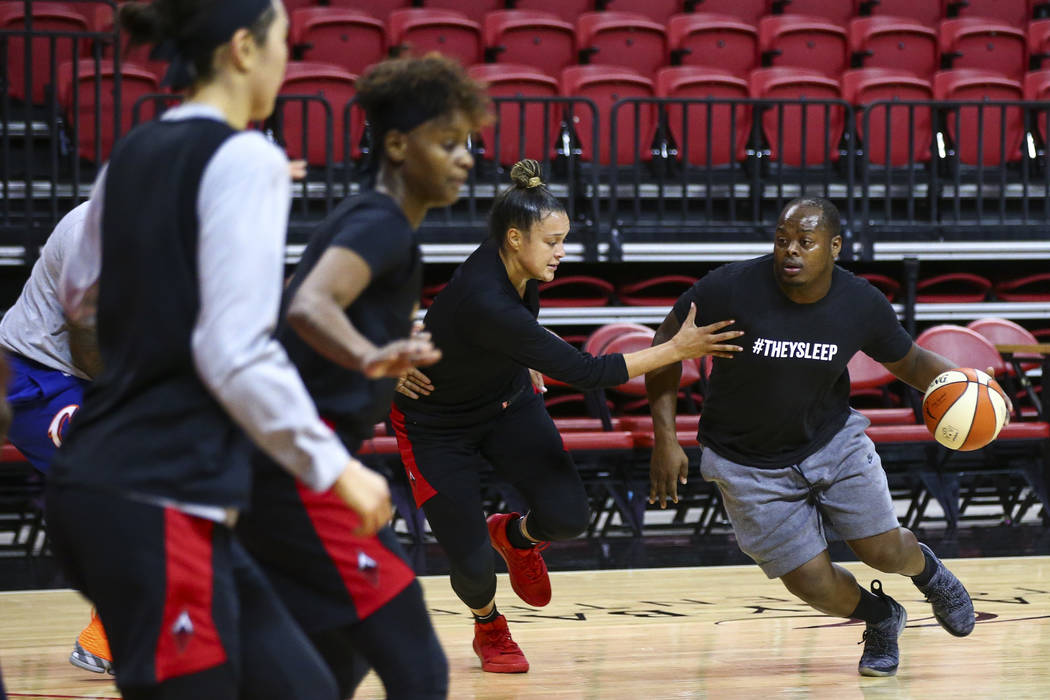 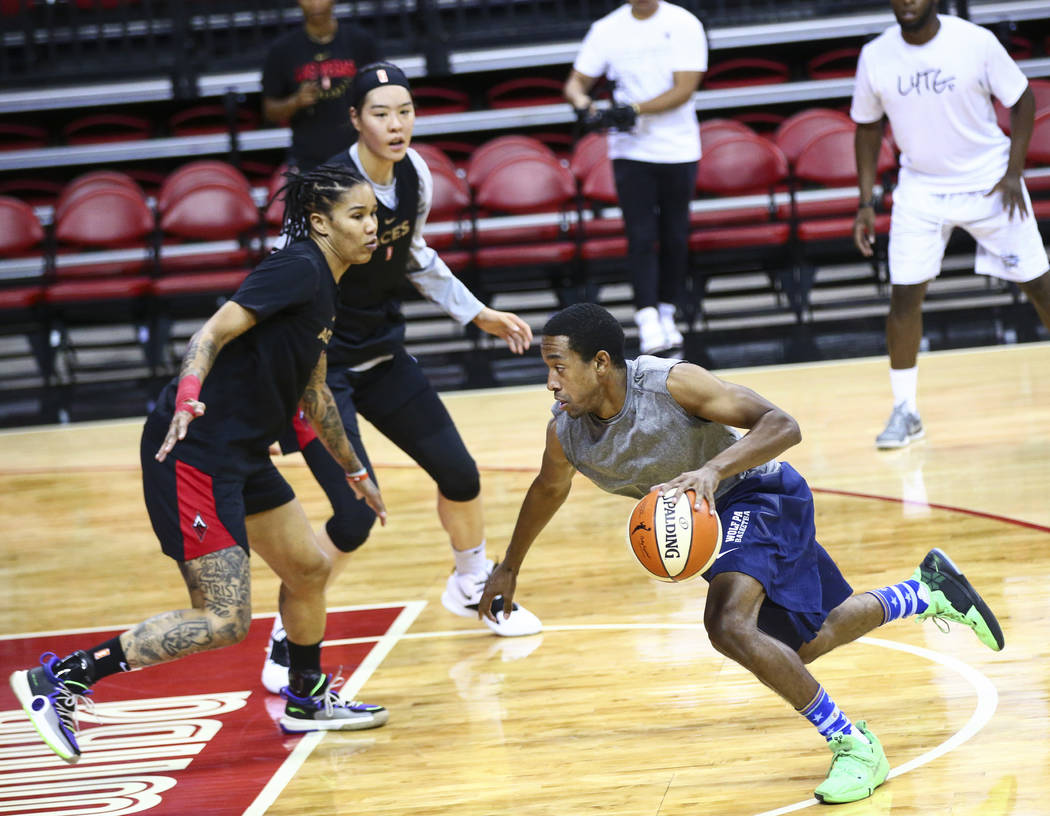 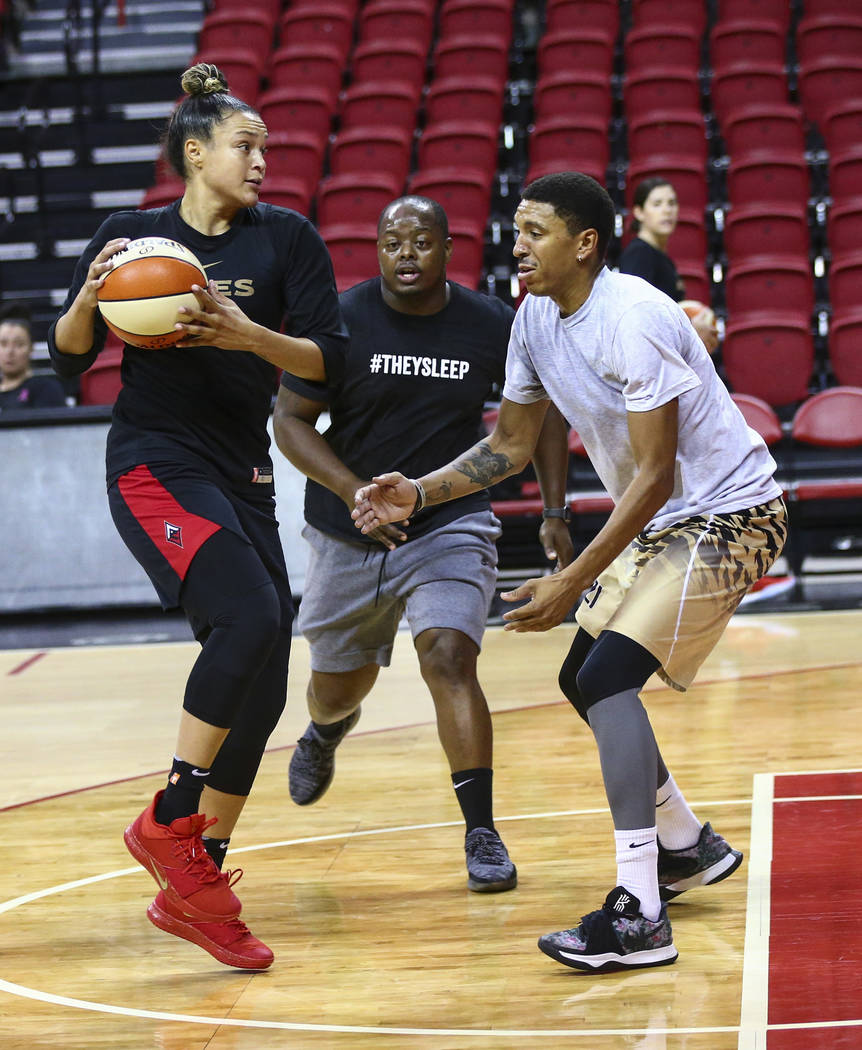 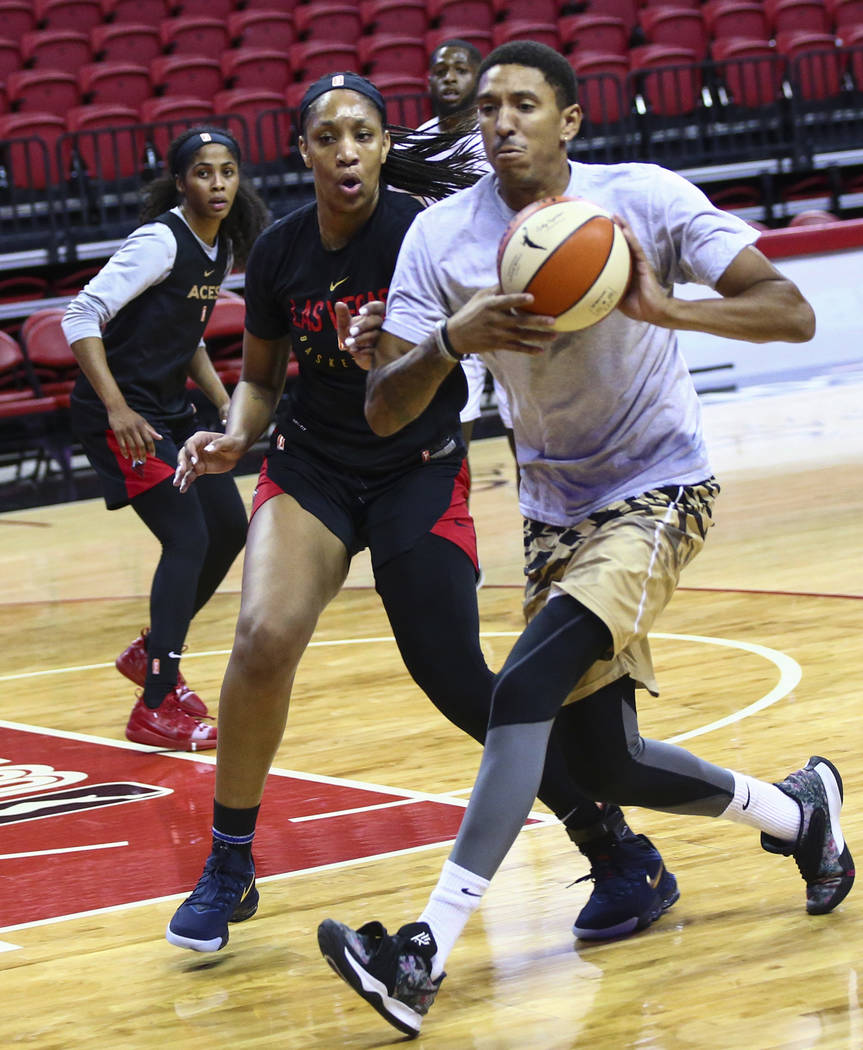 “We’re here to get them better,” said Wilkins, 29. “They put in work, and we have to come out here with our A-game — or else we’ll constantly get whipped.”

The practice is rather common in professional and collegiate women’s basketball and dates as far back as 1974, when Tennessee coaching legend Pat Summitt began recruiting men to practice against the Lady Volunteers. But it still has plenty of modern merit for the Aces, many of whom have befriended their male adversaries through the hours of friendly competition.

And for the men, who cherish the chance to play against the best women in the world.

“Whatever they may lack in sheer athleticism, they double, triple, quadruple it with execution, fundamentals and IQ,” Johnson said. “I tell the average person, especially the average man, ‘You can come out here if you want to, and they’ll touch you up and be very particular about it.’ I’m a strong dude, and I get pinned (with screens) and blasted because they execute. They don’t short change. They play unselfish.”

Johnson was born and raised in Las Vegas and attended Western before embarking on a four-year college career that concluded at the University of Maine at Machias. Wilkins is from Chicago and played for Holy Cross College in Indiana.

Some of the scouts have played professionally, most played competitively after high school and all of them “aren’t people who just get up and down the court for fun,” Aces forward A’ja Wilson said.

“They’re really good at what they do,” she added.

Johnson, 31, trains several top local athletes, including former Mojave and UNLV star Sequoia Holmes, who played for the Aces last season and recruited him to practice with the team. Wilkins is a staple on the Las Vegas pickup basketball scene and was invited by some of the other scout team players.

“You’ve got to put your pride aside and look at it as the game,” said Wilkins, who owns a streetwear company. “It’s the game of basketball, whether you’re male or female.”

The Aces practice more often against the men during training camp to prepare for the regular season and gradually faze them out to stay fresh for the 34-game schedule. Coach Bill Laimbeer solicits their services when he “really wants to practice hard” and welcomed them to the Thomas & Mack Center on Wednesday as the team prepares for the franchise’s first playoff game since 2014.

“Having them come in, it always helps us get a tougher look before we go up against our opponent,” said guard Kayla McBride, noting that most WNBA players grow up competing against males in some capacity. “You feel a little bit more worn out, you have to run a little bit harder, slide a little bit faster.”

The men have their dominant stretches, stringing together stops and scoring after exposing lapses in the intricacies of the Aces’ offensive and defensive principles. But the Aces return the favor by matching their physicality and executing.

Just like in the games when Johnson and Wilkins are in the stands.

“If I watch games or I’m in the crowd and I see a certain play executed right or a play that we ran in practice that they’ve done, I look at that and say, ‘We were helping them execute that,’” Wilkins said. “We put in work with them to help them get to that point. They win a game off a set we’ve been running all week and it’s a moment of happiness.”