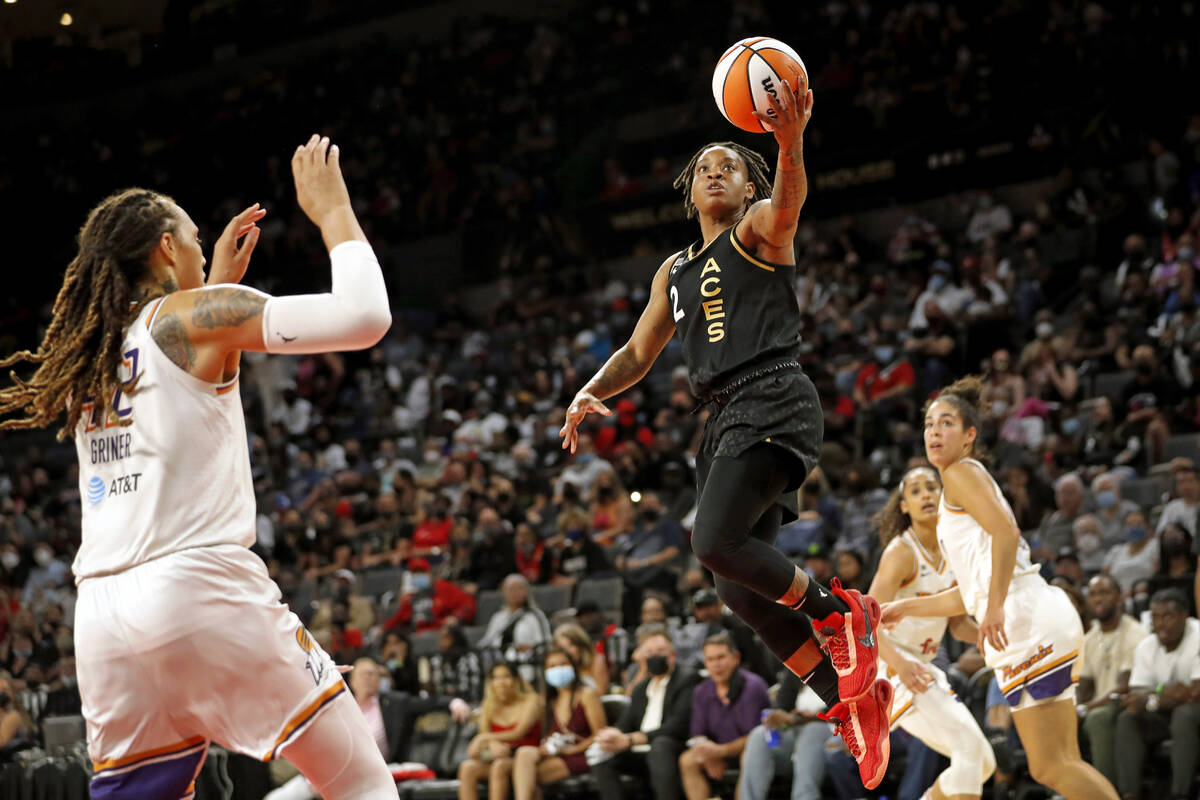 Las Vegas Aces guard Riquna Williams (2) lays up the ball during the second half of Game 1 in the semifinals of the WNBA playoffs against the Phoenix Mercury Tuesday, Sept. 28, 2021, in Las Vegas. Phoenix Mercury center Brittney Griner (42) is at left. The Aces beat the Mercury 96-90. (AP Photo/Steve Marcus)

Her role this year was different. The Aces knew they wouldn’t necessarily need her scoring prowess to win regular-season games. Not with a roster comprised of All-Stars, Olympians and All-WNBA caliber players.

But Las Vegas coach Bill Laimbeer insisted as the season progressed that Riquna Williams would shine in the playoffs. That the Aces would need her shot-making ability amid the rigorous, physical nature of postseason play.

They certainly needed it Tuesday night.

Williams showcased the offensive package that once helped her eclipse 50 points in a WNBA game, erupting for 14 of her game-high 26 points in the first quarter of a 96-90 victory over the Phoenix Mercury in Game 1 of the WNBA semifinals at Michelob Ultra Arena.

Her flurry helped the Aces stay within striking range while the rest of the offense stagnated before finding its rhythm in the second quarter.

“(I was) taking advantage of anything (the defense) was giving me and not overthinking,” said Williams, who scored 51 points in a game during the 2013 season, her second in the WNBA. “For me, it’s a different focus. There’s a different chip on my shoulder.”

But it’s the playoff games she didn’t play that she still laments.

Williams missed the 2016 season with a ruptured Achilles tendon. The Los Angeles Sparks, for whom she played, went on to win the WNBA championship in a thrilling five-game series against the Minnesota Lynx.

“I feel like I missed my opportunity,” she said Tuesday, recalling the 2016 season.

She returned in 2017. The Sparks reached the WNBA Finals again, but she played sparingly in that postseason — averaging 5.1 minutes over the course of seven games.

She returned to Sparks’ rotation in the 2018 and 2019 postseasons, though the Sparks weren’t the same championship contender they were in 2016 and 2017.

The Aces, however, are just that, having reached the WNBA Finals in 2020, and she signed with the club during the offseason.

Laimbeer planned on having Williams help comprise a lethal second unit that already featured Kelsey Plum and Dearica Hamby. But an injury to Angel McCoughtry thrust Williams into the starting lineup, where she emerged as the team’s premier perimeter defender.

She reverted back into a scorer in Game 1, using a tight handle and explosive first step to create space with her dribble. She canned a pair of three-pointers in the first quarter and also made a pair of step-back jumpers en route to her playoff career-high scoring output.

“I think it was everything for her,” Gray said of Williams. “The ability to play at such a high level, I’m really proud of her and the way she maintained her focus the entire night.

“It’s one game, but to come out in a series and be able to do that, it speaks to the type of player and person she is.”