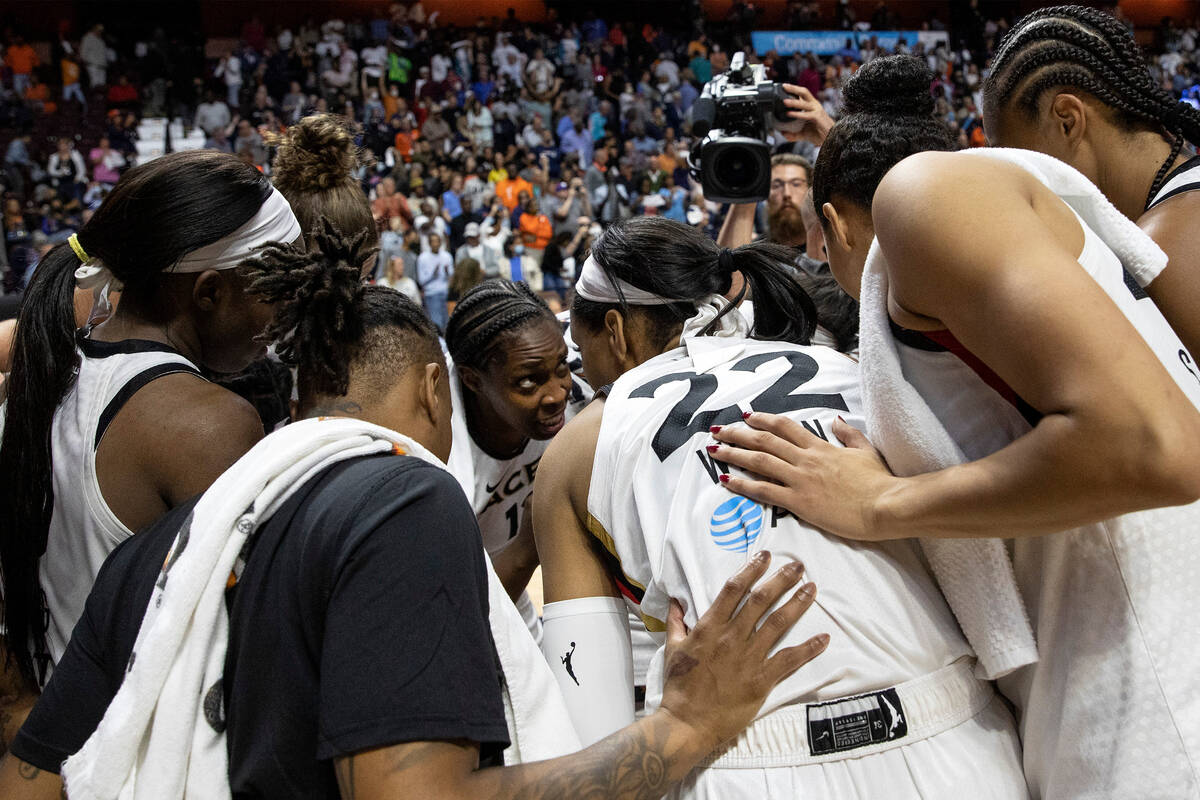 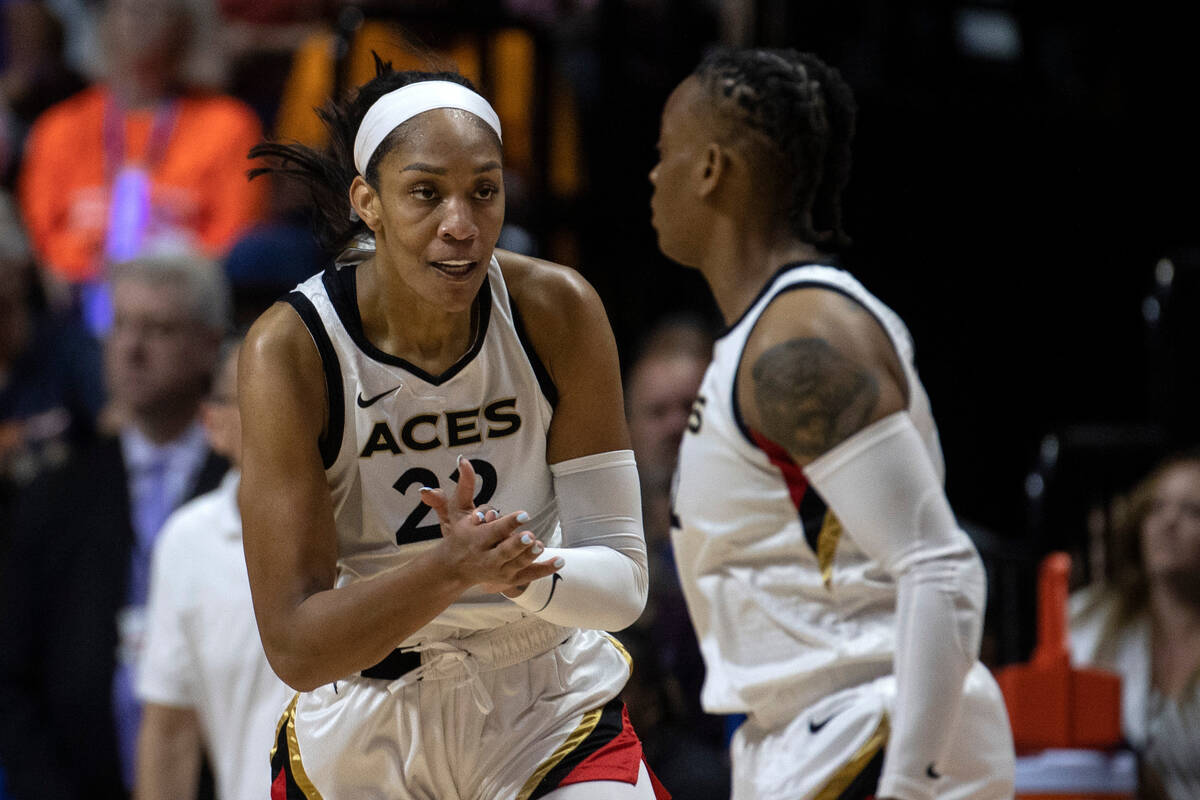 Las Vegas Aces forward A'ja Wilson (22) celebrates after scoring during the first half in Game 4 of a WNBA basketball final series against the Connecticut Sun at Mohegan Sun Arena on Sunday, Sept. 18, 2022, in Uncasville, Conneticut. (Ellen Schmidt/Las Vegas Review-Journal) @ellenschmidttt 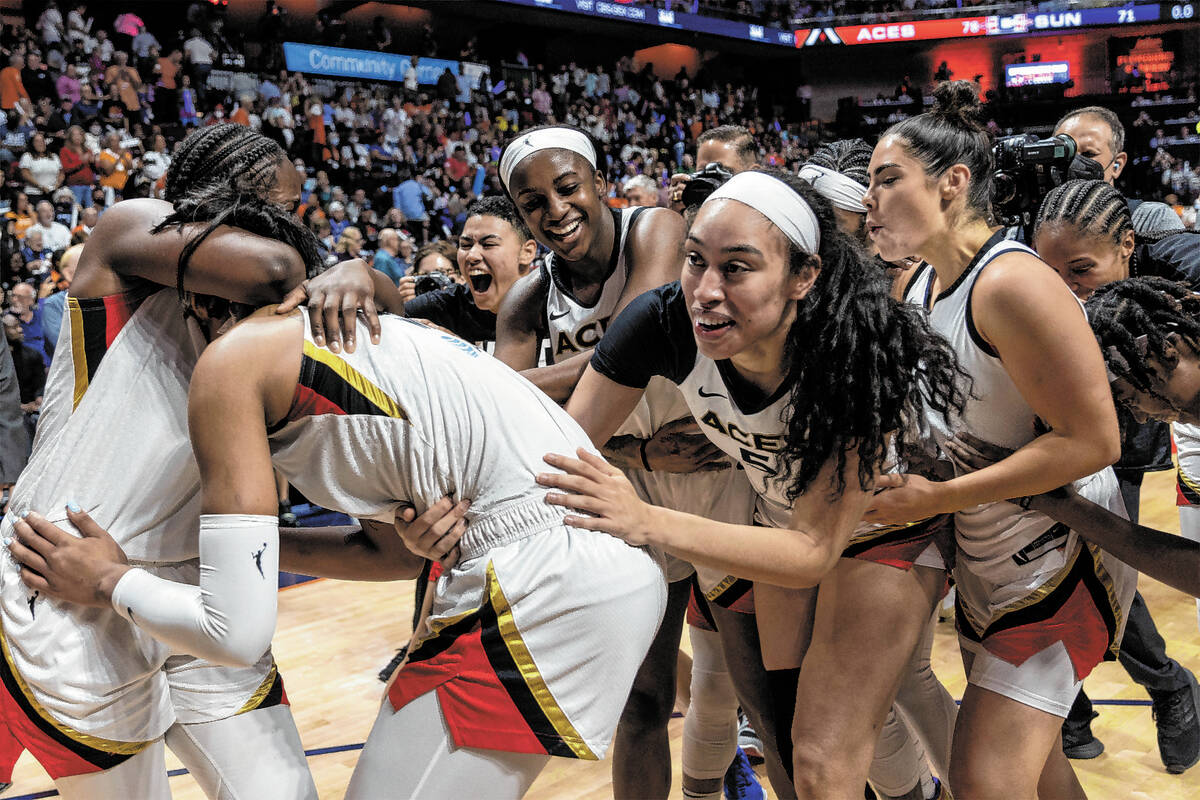 Plans call for the team and other members of the organization to make a short trip on multiple vehicles south down Las Vegas Boulevard from Caesars Palace to the Bellagio. There, a fan rally celebrating the Aces 3-1 series win over the Connecticut Sun will be staged in front of the resort’s popular fountains.

The event is free and open to the public.

Aces star and WNBA MVP and Defensive Player of the Year A’ja Wilson said it’s going to be a scene as the city celebrates its first major league sports championship.

“The Bellagio fountains, we skiing across that thing,” Wilson jokingly said Sunday during a postgame news conference. “We going crazy. Because I don’t think people understand how important this really is. This is huge … But Usher, I better see you, Usher. I’m not playing with you.”

Southbound lanes on the Strip between Caesars Palace and the Bellagio will be closed to vehicle traffic Tuesday between 6 a.m. and 11 p.m. for event setup and breakdown.

The fan rally is planned to begin at 5:30 p.m. Tuesday and last about one hour, according to County Commissioner Michael Naft. During the event, Naft will present the Aces with a key to the Strip.

Gov. Steve Sisolak will also present the Aces with a proclamation, according to spokeswoman Meghin Delaney.

Fans can park at any of the surrounding resorts on the Strip, with each property’s normal parking rates in place. Those looking to skirt traffic before or after the event can also park at resorts on the north and south ends of the Strip and take the Las Vegas Monorail to and from the Bally’s exit.

Fans looking to get their hands on Aces championship gear can do so at a pair of popup shops this week in the Las Vegas Valley.

The Strip was being readied to celebrate the team Monday, with crews from Screaming Images installing a massive building wrap on the MGM Grand. The wrap will read at the top “Congrats WNBA Champions!” with Aces players and head coach Becky Hammon featured in the middle and the team’s logo at the bottom. It will be 44 feet wide by 190 feet tall when installation is complete late Tuesday afternoon.