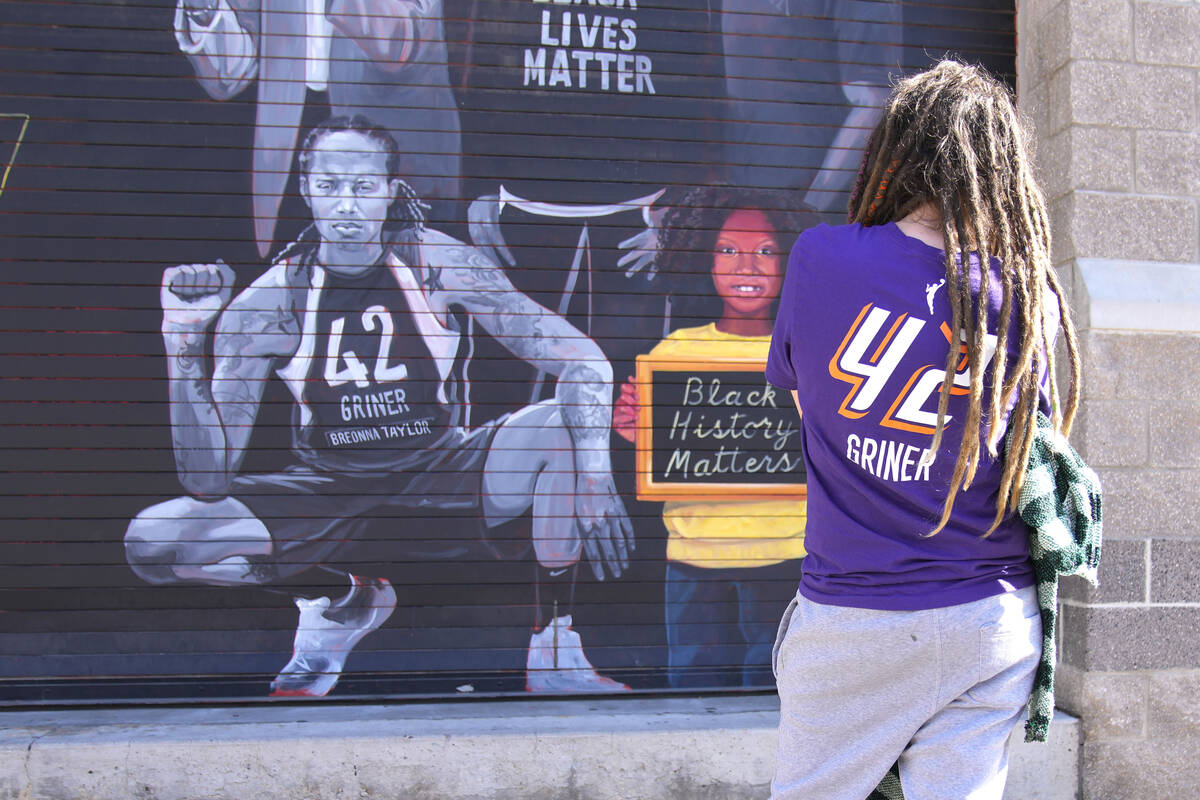 Carly Givens of Phoenix shows support for Brittney Griner, Thursday, Dec. 8, 2022, in Phoenix. Griner was released from a Russian prison in a prisoner swap earlier in the day. (AP Photo/Rick Scuteri) 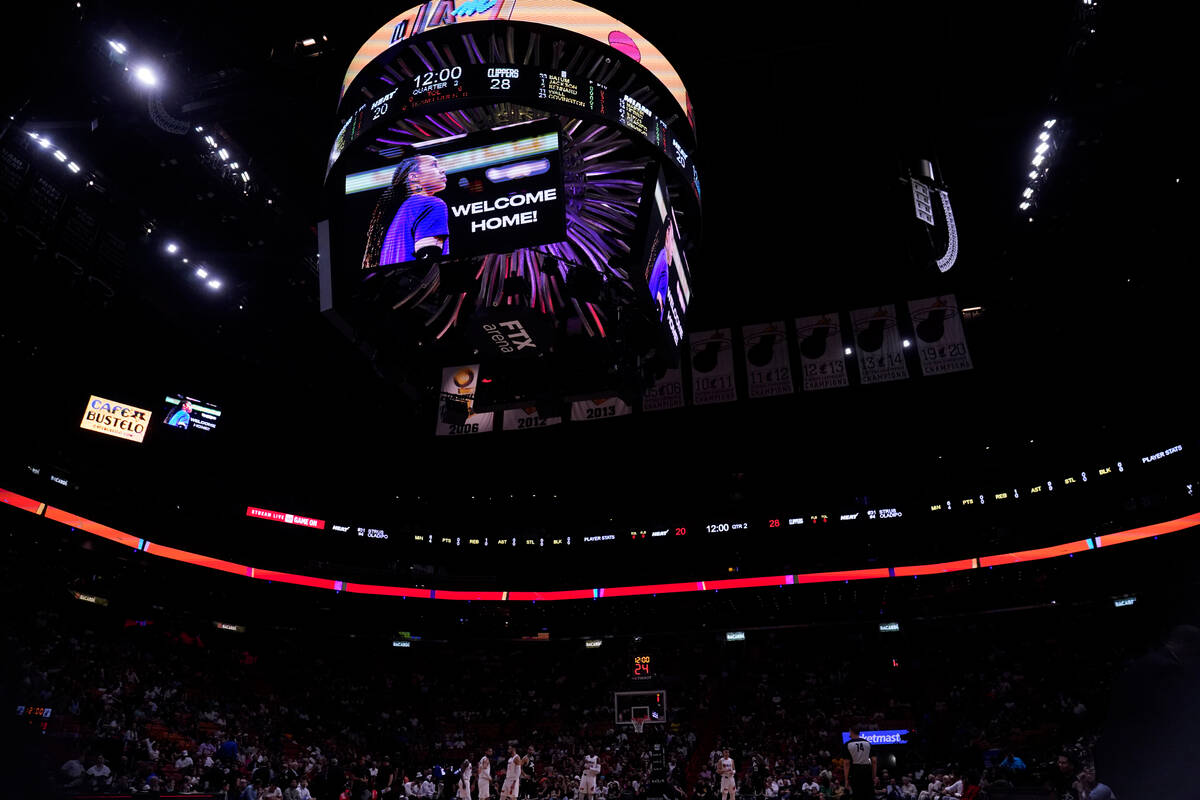 Brittney Griner is welcomed home on a large screen during the first half of an NBA basketball game between the Miami Heat and the Los Angeles Clippers, Thursday, Dec. 8, 2022, in Miami. Griner was released from a Russian prison in a prisoner swap earlier in the day. (AP Photo/Wilfredo Lee) 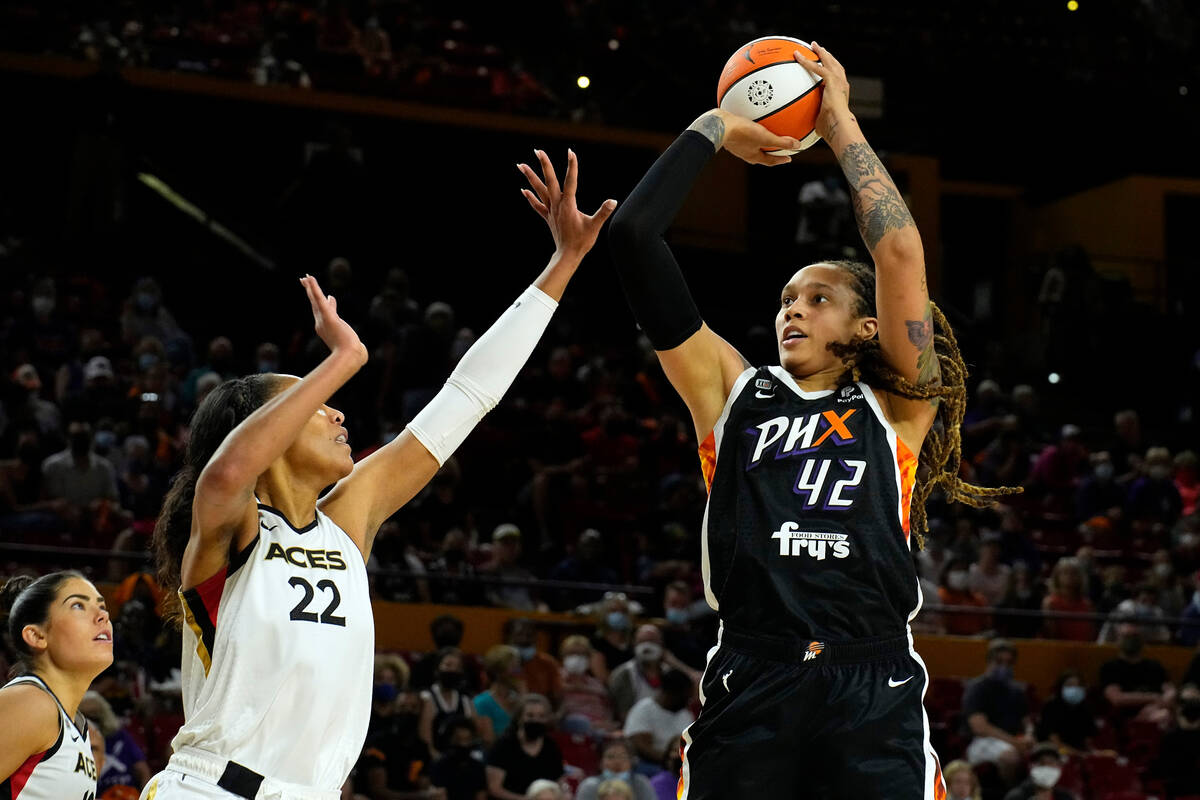 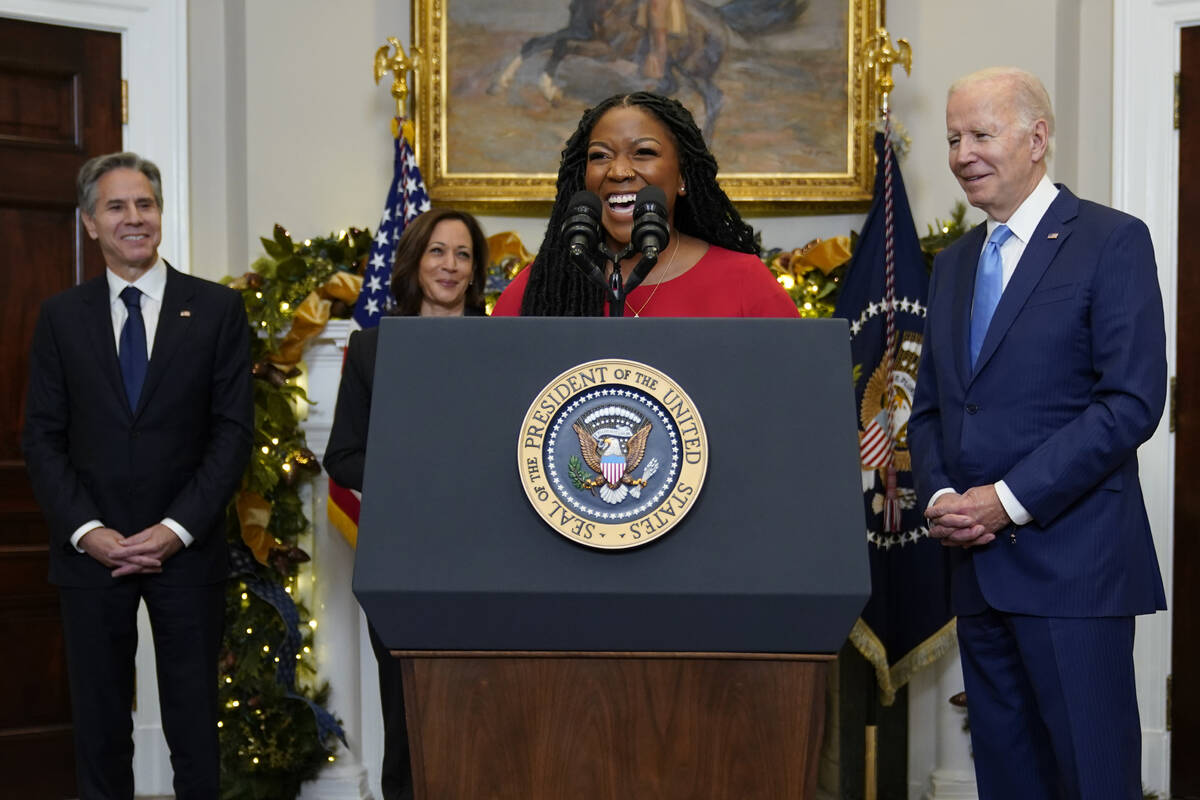 Brittney Griner is coming home, and WNBA players, including members of the Aces, are rejoicing.

“I am beyond grateful and relieved that Brittney was released, and is on her way home to be reunited with her family,” two-time WNBA MVP and Aces forward A’ja Wilson said.

Griner, a two-time Olympic gold medalist and star with the WNBA’s Phoenix Mercury, was freed from a Russian prison Thursday in exchange for the release of arms dealer Viktor Bout by the U.S. Griner had been detained since Feb. 17 after cartridges containing hashish oil were found in her luggage, Russian officials said.

Griner had been playing abroad for UMMC Ekaterinberg. Russia’s invasion of Ukraine began a week later, and Griner became what was seen as a political pawn for the Russians in their dealings with the U.S.

The WNBA and its players were extremely vocal about Griner’s detainment. Every team placed decals with her initials and her No. 42 on their courts, and the league named her an honorary All-Star in her absence.

Several teams held shoe drives in honor of Griner, supporting a program she had started in 2016 to give unhoused people in the Phoenix area footwear, and WNBA and NBA players wore shirts with the phrase “We are BG” throughout the season.

“Super excited for her and her family,” Aces All-Star wing Jackie Young said, “especially to have her home for the holidays.”

The WNBA and the players association also released statements Thursday thanking President Joe Biden’s administration and the Office of the Special Presidential Envoy for Hostage Affairs.

The WNBA and the players also expressed their hopes that Paul Whelan, another American citizen who is being detained in Russia, will return safely to the U.S. soon. The U.S. was unable to include Whelan in the prisoner swap with Griner.

“Today culminates 294 days of relentless effort to free BG from her wrongful detainment,” the WNBPA said in a press release. “We, as a Union, have not been whole since February 17, 2022. But, today, our 144 is complete.”

Griner’s detention hit home for several members of the Aces.

Wilson broke down in tears during a postgame press conference June 27 after being asked about seeing photos of her former Olympic teammate during a preliminary trial. The two bonded while playing for Team USA, and Wilson said it “made my stomach turn” after seeing the images of Griner being escorted by prison guards while in handcuffs.

“My main concern is her mental health and allowing her the space and time to recover from this incredibly traumatic experience,” Wilson said Thursday.

Aces coach Becky Hammon and WNBA Finals MVP Chelsea Gray spoke about Griner’s detainment in early August after she was sentenced to nine years in prison. At the time, Hammon, who played seven seasons in Russia and represented the country at two Olympics, said it’s difficult to beat an opponent who doesn’t play by any rules.

On Thursday, Hammon spoke about Griner while making her debut as an ESPN studio analyst.

“Our whole WNBA family, it’s a sisterhood, a brotherhood,” Hammon said. “Anybody involved in the game of basketball has to be exuberant this morning.”