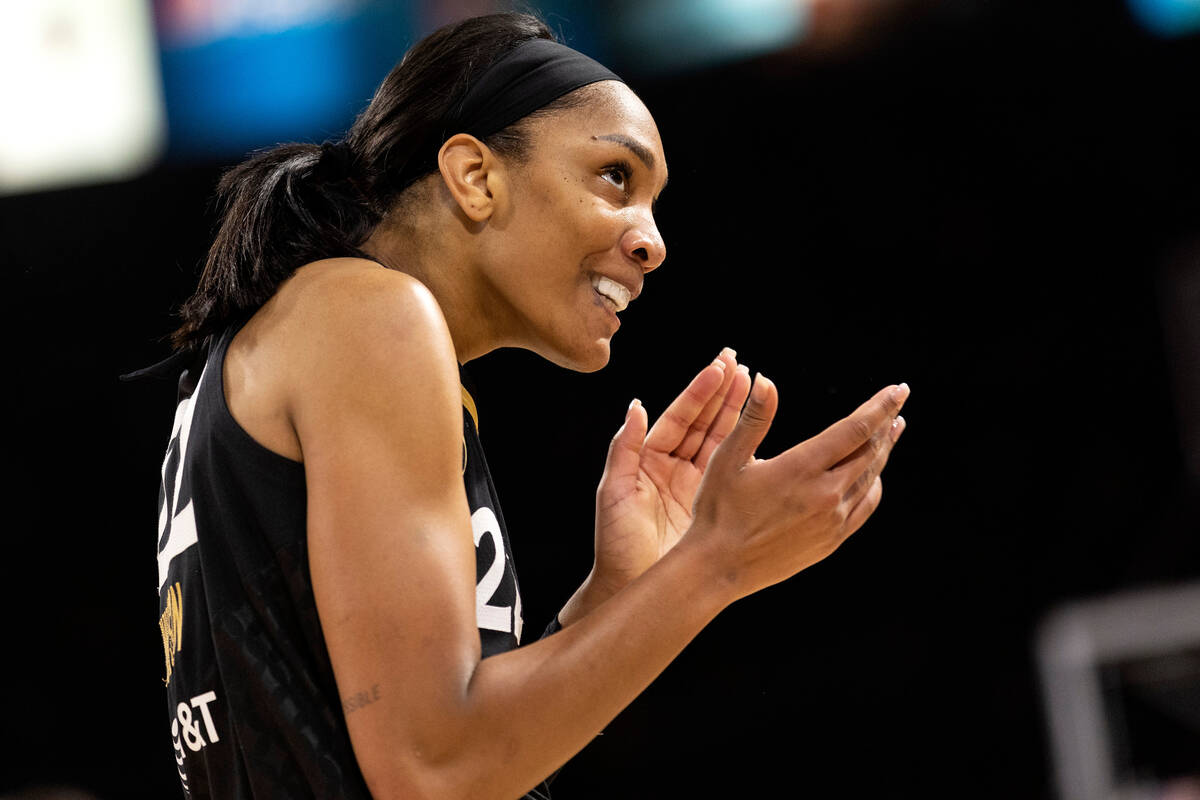 Las Vegas Aces forward A'ja Wilson (22) claps to the crowd after a referee called a foul on the Phoenix Mercury during the first half of a WNBA playoff basketball game at Michelob ULTRA Arena on Saturday, Aug. 20, 2022, in Las Vegas. (Ellen Schmidt/Las Vegas Review-Journal) @ellenschmidttt 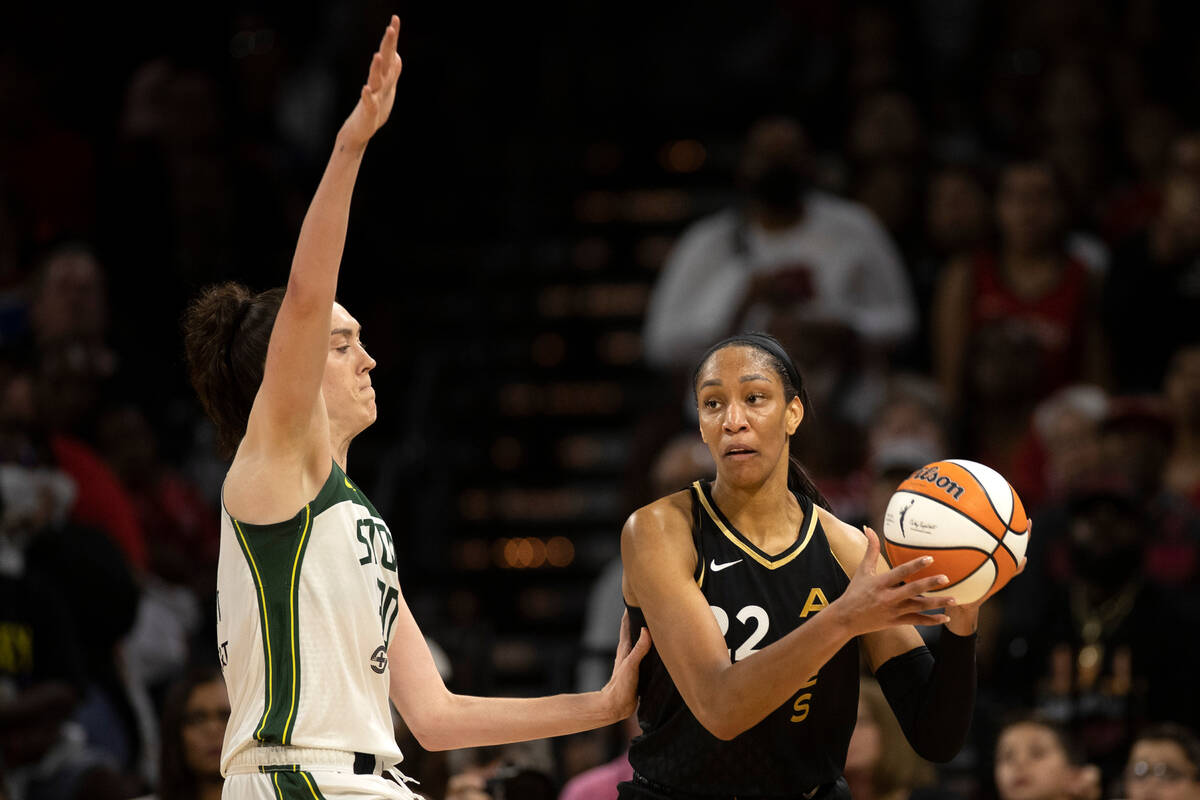 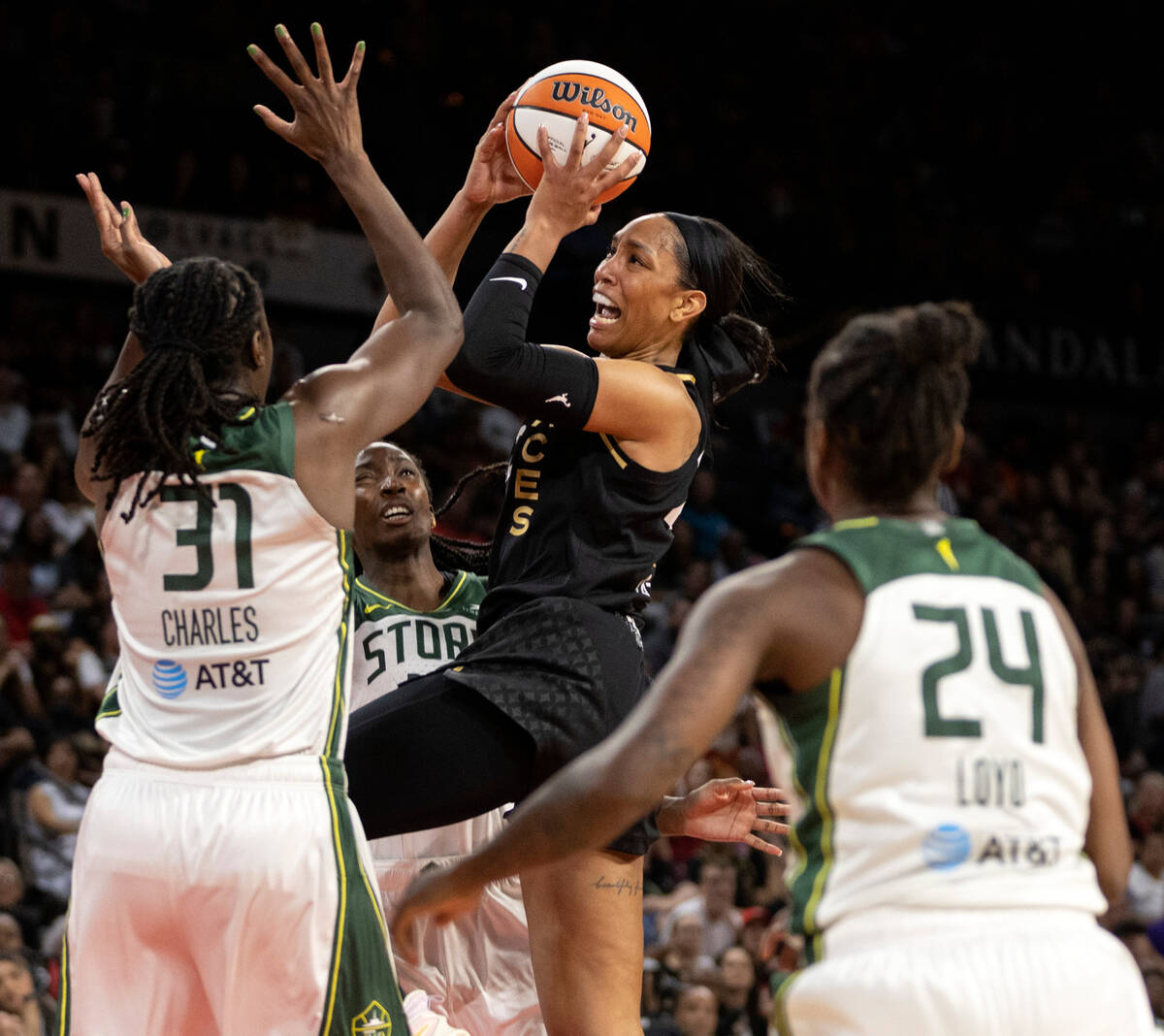 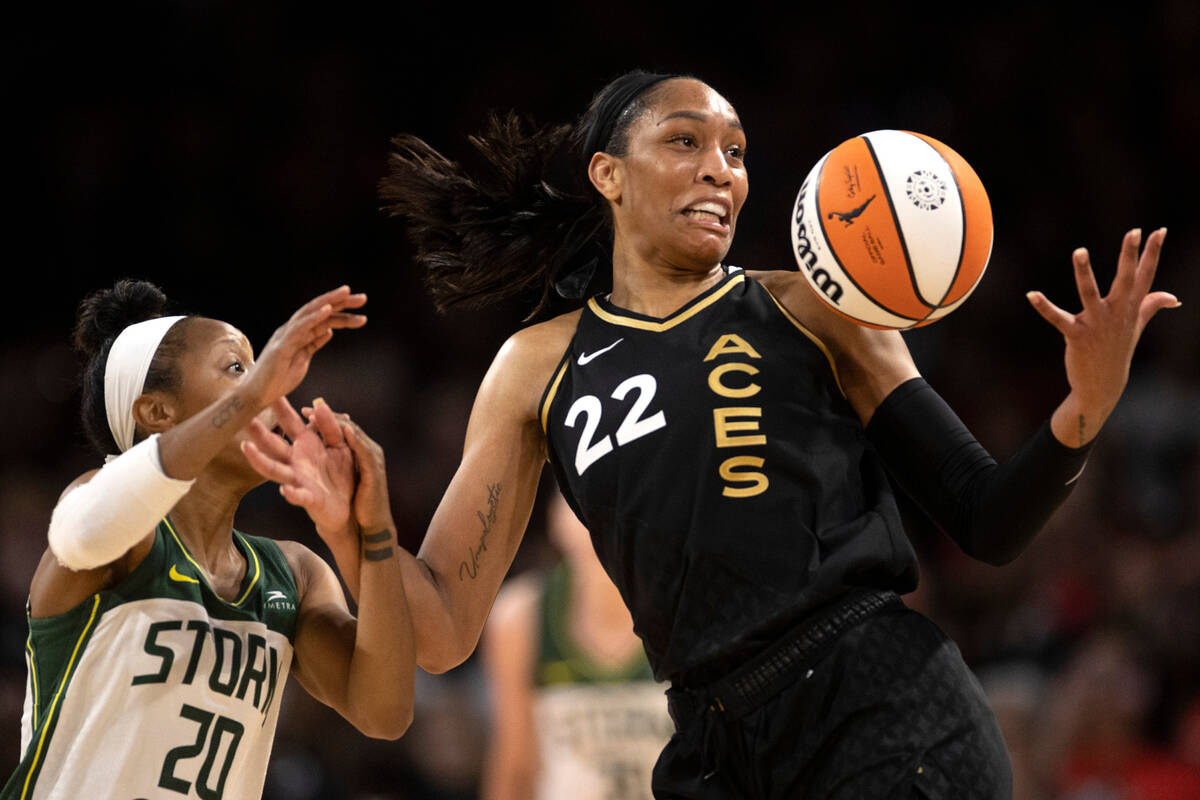 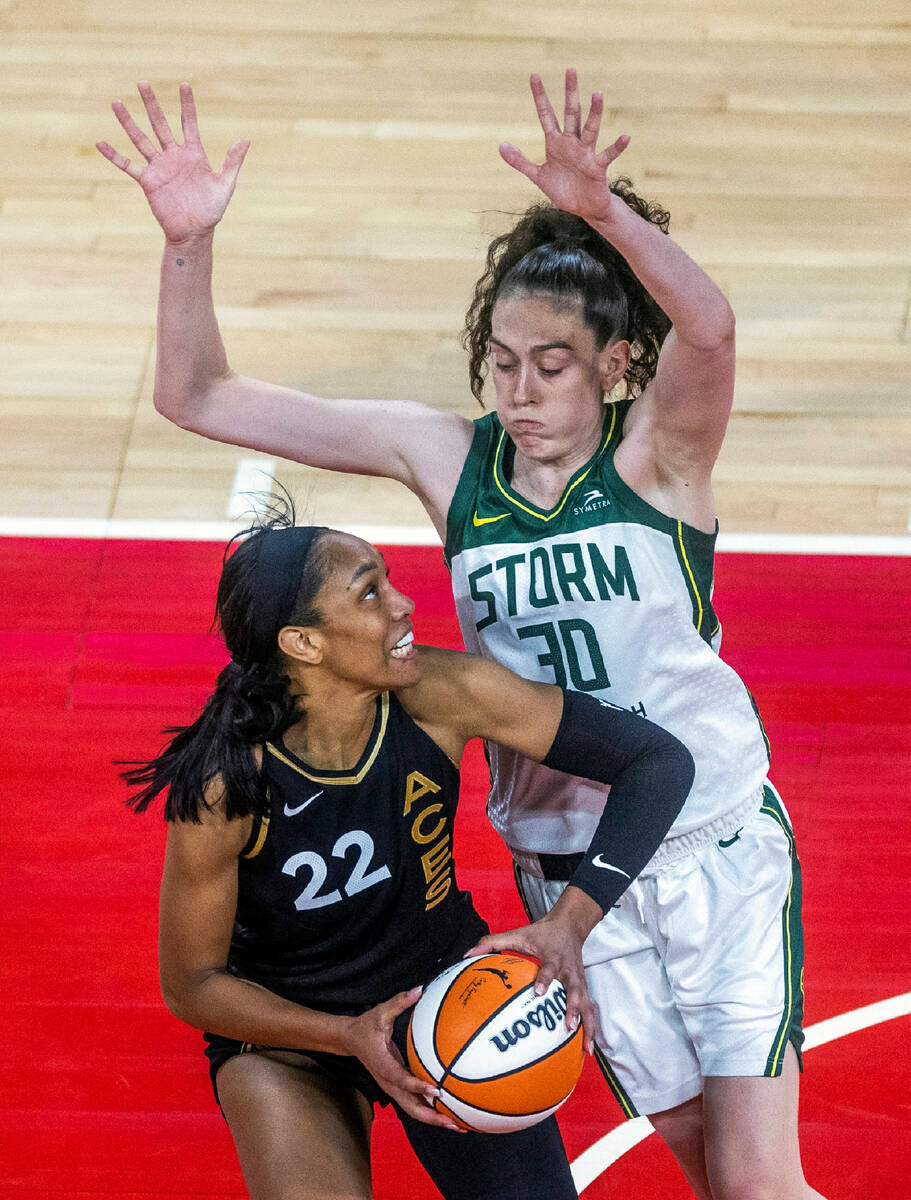 Las Vegas Aces forward A'ja Wilson (22) is smothered by Seattle Storm forward Breanna Stewart (30) while looking to shoot during the second half of their WNBA semifinals game 1 at the Michelob ULTRA Arena on Sunday, Aug. 28, 2022, in Las. Vegas. (L.E. Baskow/Las Vegas Review-Journal) @Left_Eye_Images 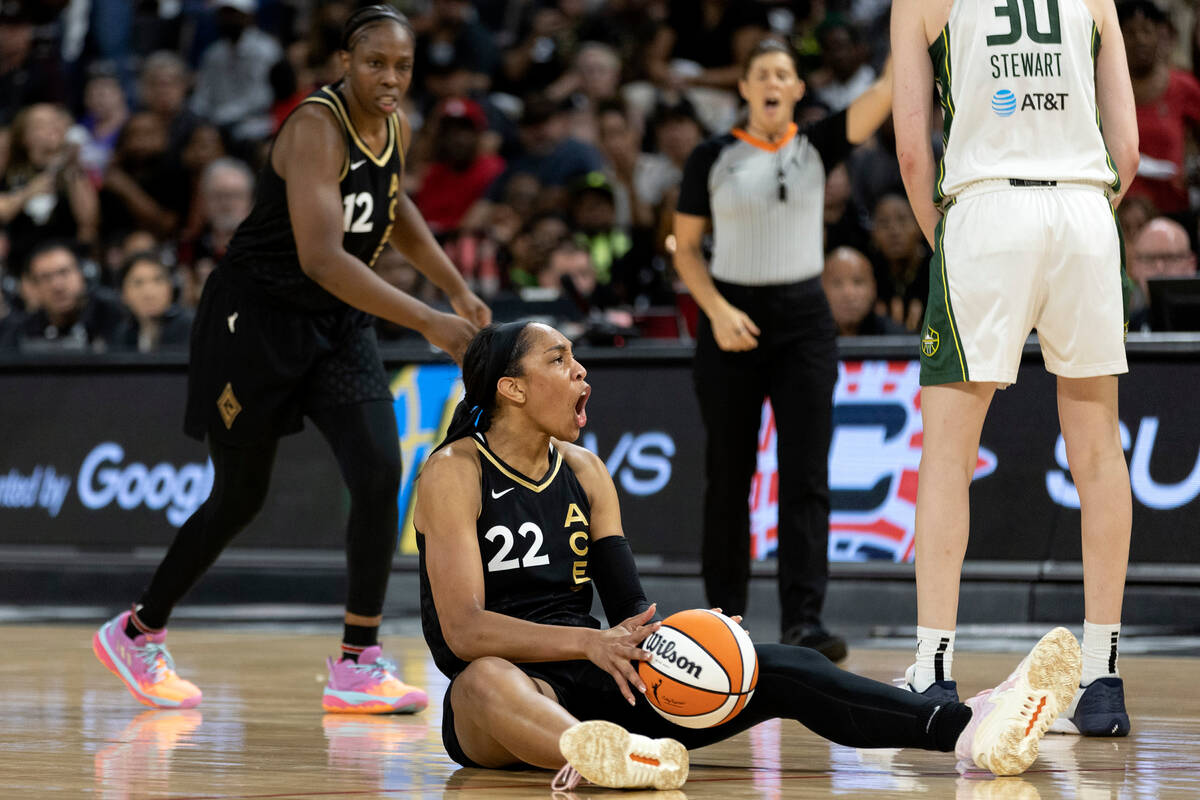 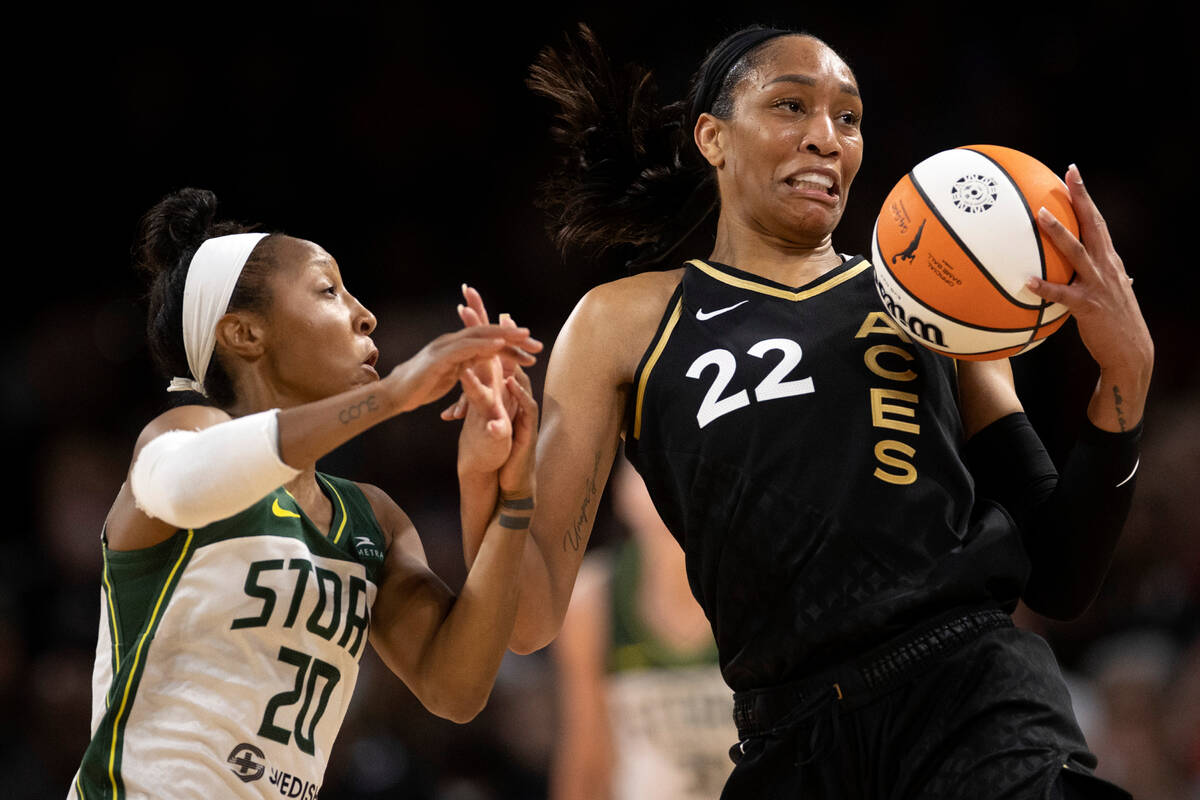 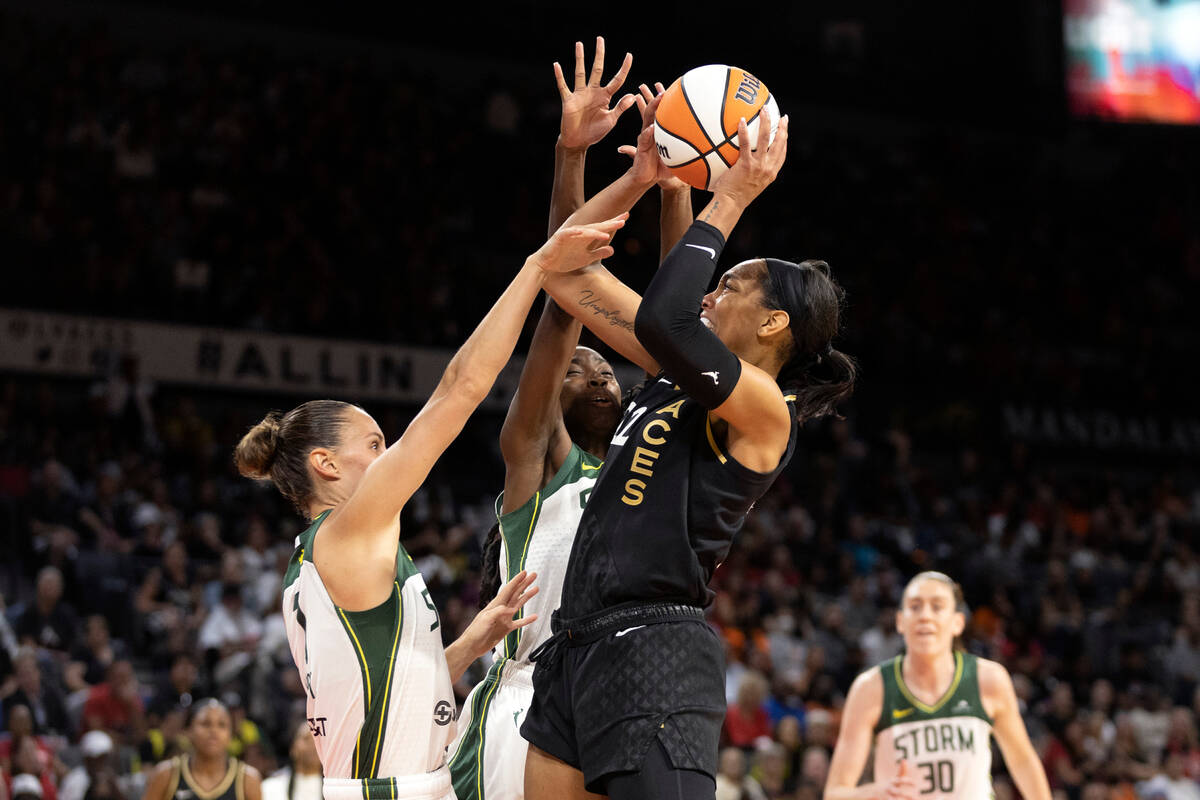 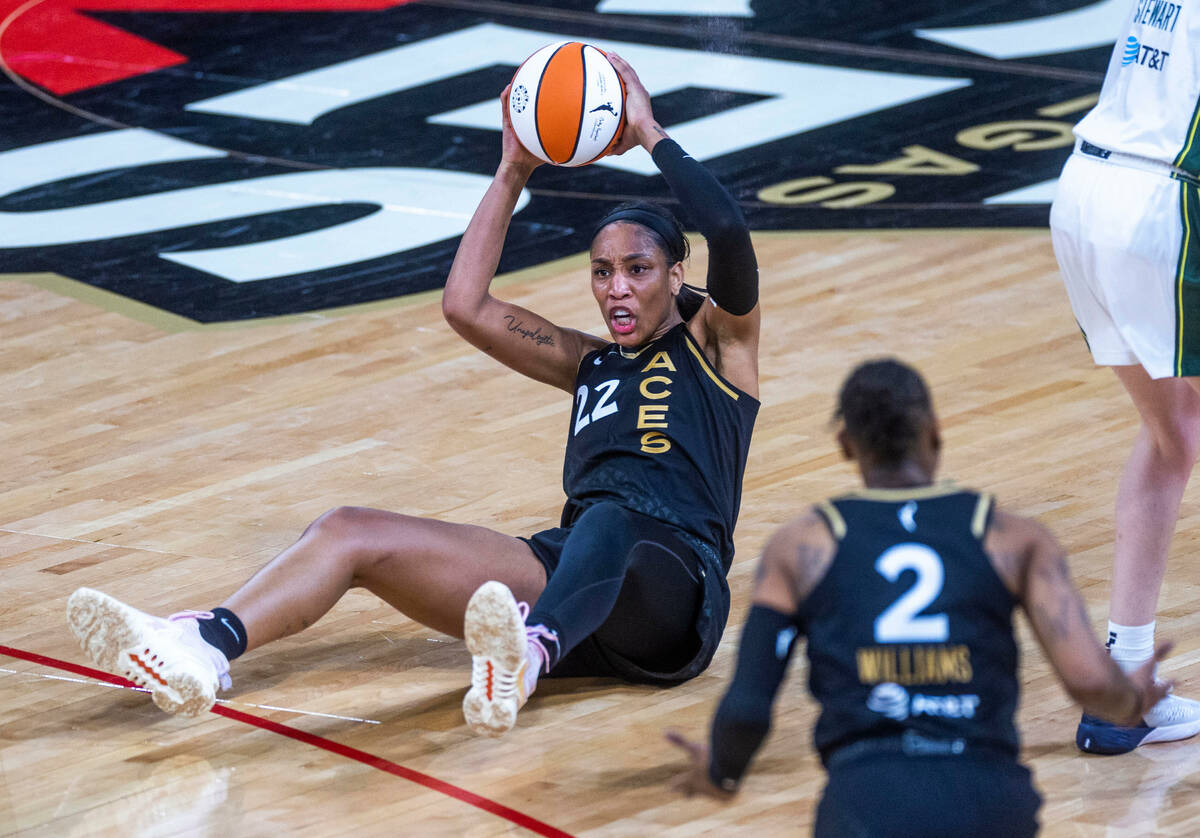 Las Vegas Aces forward A'ja Wilson (22) is pumped after keeping possession of the ball over Seattle Storm defenders during the second half of their WNBA semifinals game 2 at the Michelob ULTRA Arena on Wednesday, Aug. 31, 2022, in Las. Vegas. (L.E. Baskow/Las Vegas Review-Journal) @Left_Eye_Images 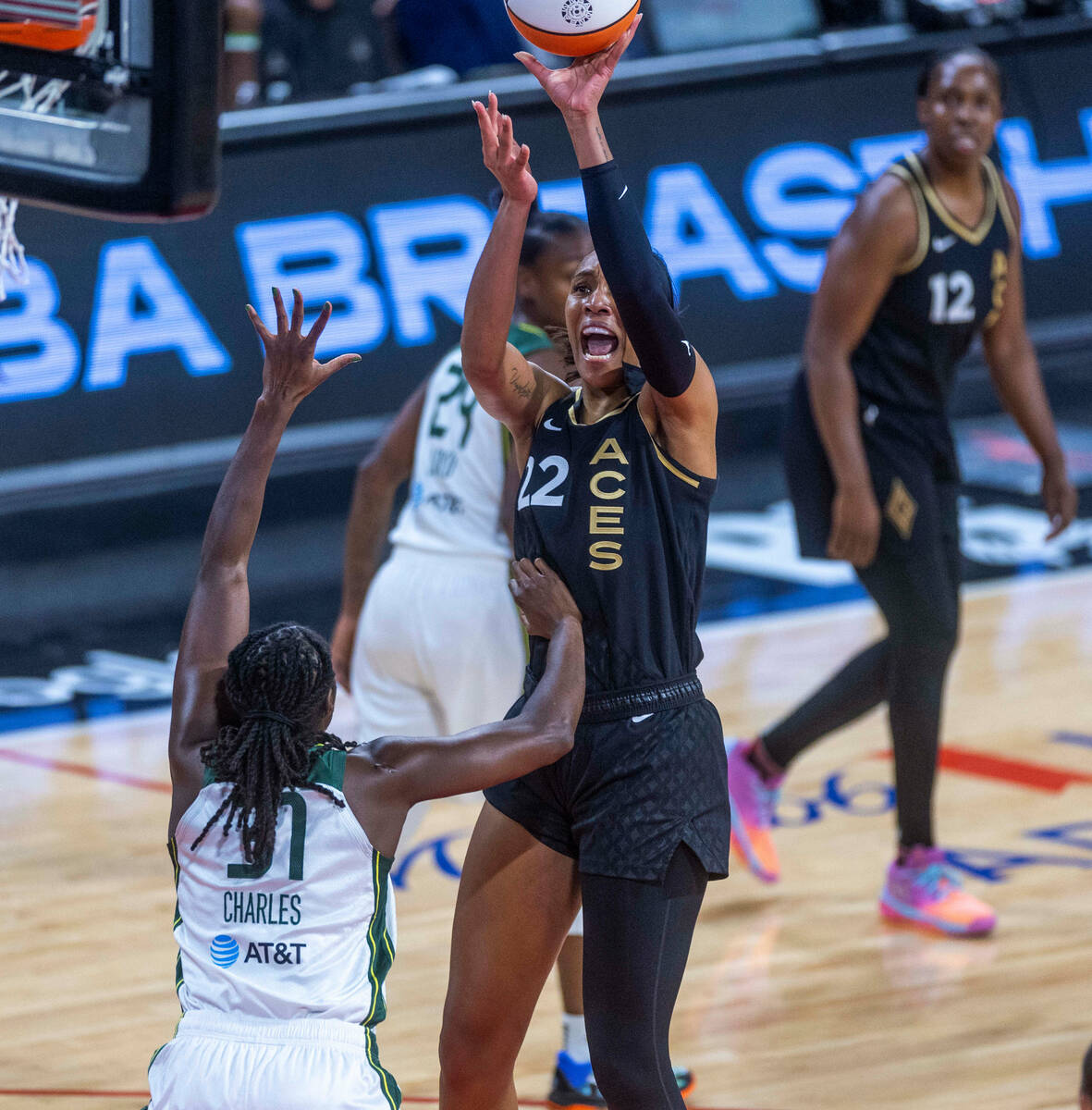 Aces star A’ja Wilson found out she was named the WNBA’s MVP on Wednesday in fitting fashion — surrounded by her teammates and the coaching staff in Climate Pledge Arena’s visiting locker room in Seattle.

Coach Becky Hammon was wrapping up the team’s postgame debrief after the top-seeded Aces clinched a spot in the WNBA Finals on Tuesday when she mentioned that Wilson was selected as the league’s MVP.

The 6-foot-4-inch forward fell to her knees and was mobbed by her teammates, who used their water bottles to shower her in celebration.

“Winning this award is just epic, as a whole,” said Wilson, who also won the award in 2020. “Saying I’ve won it twice is truly a blessing.”

Wilson officially was announced as the league’s MVP less than 24 hours after she scored 23 points and played all 40 minutes of the Aces’ series-clinching 97-92 Game 4 win over the No. 4 Seattle Storm and its MVP candidate, Breanna Stewart.

Wilson received 478 points and 31 first-place votes from the national panel of 56 sports writers and broadcasters. The award comes eight days after she was named the league’s Defensive Player of the Year.

“This league is way too good,” Wilson said, “That’s why I don’t take this for granted at all. I’m so grateful.”

The Aces will play in the finals for the second time in three years. They will meet the No. 2 Chicago Sky or No. 3 Connecticut Sun, who will play Game 5 of their series at 5 p.m. Thursday in Chicago.

Game 1 of the finals will be at noon Sunday at Michelob Ultra Arena.

“There’s so much more work that needs to be done,” Wilson said. “But I’m happy with where I am.”

Wilson is the fifth player in league history to win the MVP and Defensive Player of the Year awards in the same season and the first since Jackson in 2007. Yolanda Griffith, Leslie and Swoopes also achieved the feat.

Wilson made her fourth All-Star Game appearance, as she was the leading vote-getter and named a captain. She was named Western Conference Player of the Month in May and July.

“Those women laid the foundation down for me, for players like myself, for a lot of women in this league to do what we do and love what we do,” Wilson said.