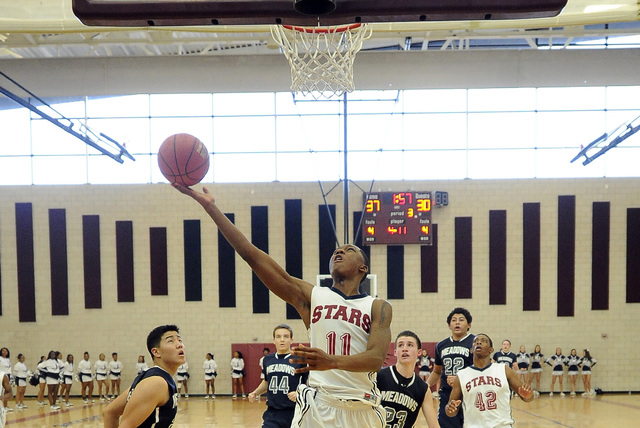 Agassi Prep guard Deishuan Booker (11) goes up for a layup against The Meadows this season. Booker averages 27.7 points for the Stars, who head into the state tournament riding a 43-game winning streak. (Josh Holmberg/Las Vegas Review-Journal)

Agassi Prep boys basketball coach Trevor Diggs remembers every little detail about a loss that happened almost 14 months ago. That’s because the second-year coach doesn’t have many losses on his resume.

Diggs, who has the defending state champion Stars on a 43-game win streak, plans on extending that run when the state tournament begins Friday at Sunrise Mountain.

Agassi Prep (24-0) meets Incline (20-5) at 8 p.m. Friday in the Division III state semifinals. The winner will face the winner of the Yerington-The Meadows game, which begins at 4:40 p.m. Friday, for the championship at 8:10 p.m. Saturday at Orleans Arena.

The Stars beat the Highlanders 71-60 last season to win the state championship.

“We feel confident,” Diggs said. “Just in the way we play defense, we’re a confident bunch. When you win 43 games in a row, you are confident. The plan is to win the next game. We know the team we’re playing is pretty good; nobody in this tournament is a bad team. We’re expecting their best, and we’ll give them ours.”

Agassi Prep, which last loss to Kingman Academy (Ariz.) on Jan. 4, 2014, is 50-1 under Diggs and rarely has been threatened in the process.

“We lost by one (point),” Diggs said of his only loss. “But how the tournament was set up, we actually beat them that (morning). I would put that loss on me. I could’ve coached better. I didn’t make the proper adjustment for our team to be successful.”

This season, the Stars have defeated their opponents by an average of 31.5 points. Only four games have been decided by 10 points or fewer.

“We don’t look at it like we’re going to beat everybody by 30 points,” Diggs said. “If we play our game, and play the defense the way we can play, our team should be fine. It’s a challenge every game to play. That’s why I love basketball. Anything can happen. And these kids have stayed focused the last two years. It’s really a testament to these kids.”

Behind the area’s leading scorer — guard Deishuan Booker, who averages 27.7 points — the Stars are the overwhelming favorites to repeat.

“I’ve got guys willing to share the ball,” Diggs said. “Last year, we had Deishuan scoring and didn’t know where the help would be from. It’s a really special bunch. We could play eight to nine players and there’s no drop-off.

“This team needs to stay focused and understand that we can do something special if we don’t get caught up in the moment. We want to play the same basketball we’ve played all year. This Agassi Prep team is for real.”

The Division I-A boys and girls semifinals will begin at 3 p.m. Friday at Silverado.

The Division IV boys and girls semifinals will start at 11 a.m. Friday at Orleans Arena.