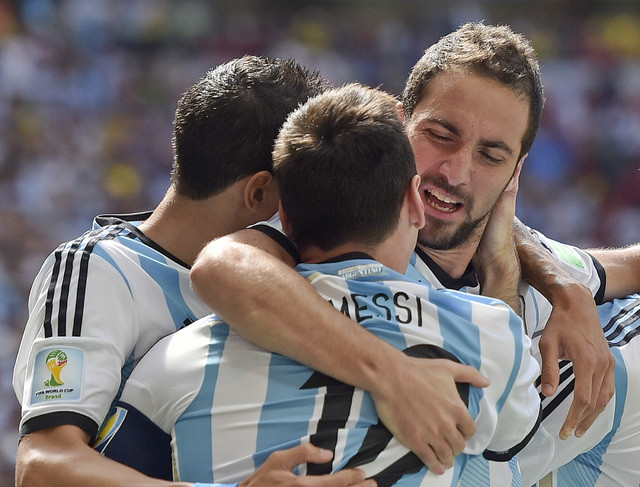 BRASILIA, Brazil — Gonzalo Higuain’s first goal of this World Cup sent Argentina into the semifinals on Saturday with a 1-0 win over a disappointing Belgium.

Argentina, which hadn’t advanced past the World Cup quarterfinals since 1990, put in its best performance so far in the tournament, controlling the match after Higuain’s eighth minute goal.

The Napoli striker fired home Angel Di Maria’s deflected pass just inside the area, beating Belgium goalkeeper Thibaut Courtois with a low shot to the far corner of the net.

Higuain came close to making it 2-0 in the second half when his shot smashed into the crossbar. Lionel Messi missed a chance to score his fifth goal of the tournament in stoppage time when Courtois stopped his shot.

Belgium lacked the creativity to find a way past Argentina’s defensive line, and created few clear chances apart from a pair of headers by Kevin Mirallas and Marouane Fellaini.

Argentina’s next opponent will be the winner of the last quarterfinal between the Netherlands and Costa Rica, who were playing later Saturday in Salvador.

Argentina was knocked out in the quarterfinals in the previous two World Cups, both times by Germany. The last time it reached the semifinal stage was 24 years ago in Italy, when Diego Maradona led the team to the final, which it lost 1-0 to West Germany.

In Brasilia on Saturday, Argentina never lost control even after Di Maria — the team’s most influential player in Brazil aside from Messi — was substituted by Enzo Perez in the 33rd. The winger had appeared to hurt his right leg while taking a shot five minutes earlier.

Argentina took the lead when Di Maria picking up a pass from Messi, cut in from the right and tried to find fullback Pablo Zabaleta, but his pass bounced off Jan Vertonghen into Higuain’s path.

The Napoli striker avenged himself for a string of mediocre performances in Brazil and was Argentina’s best player before being substituted by Fernando Gago in the 81st.