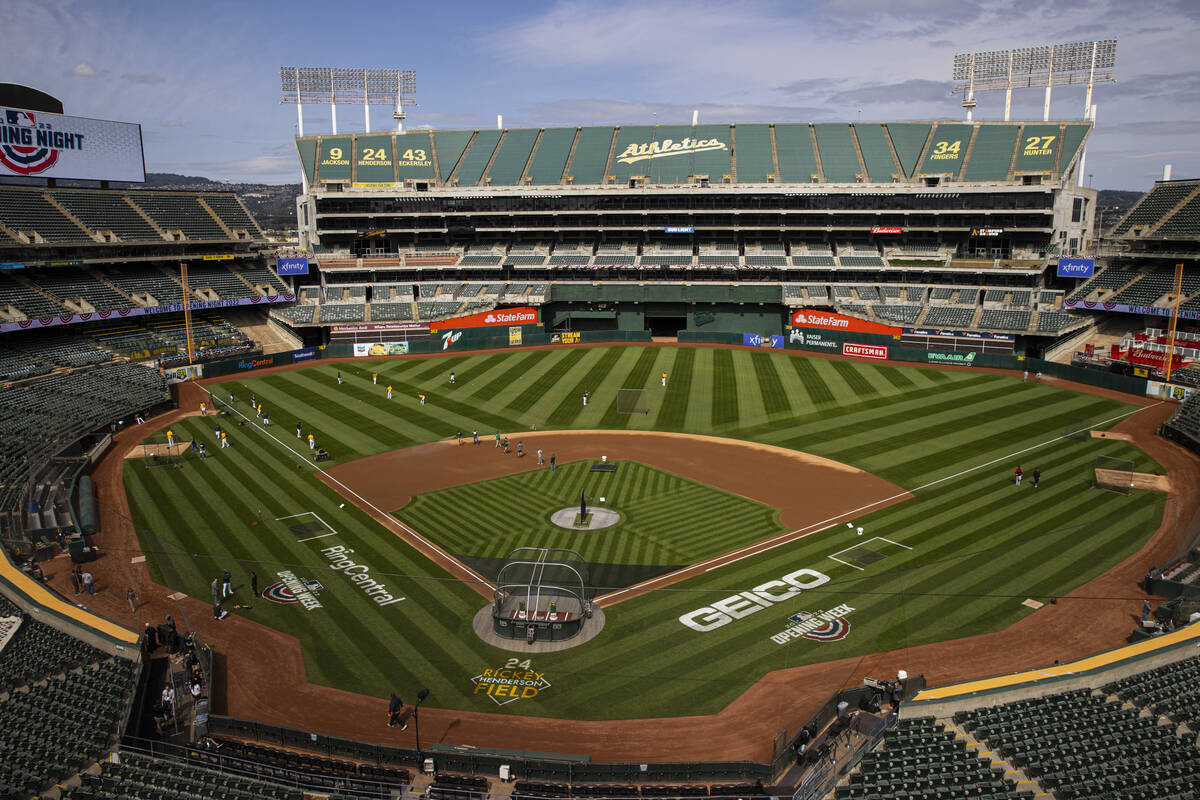 The Oakland Athletics warm up before the opening night game against the Baltimore Orioles on Monday, April 18, 2022, at the Coliseum in Oakland, Calif. (Chase Stevens/Las Vegas Review-Journal) @csstevensphoto

A special message printed on the bottom of some beer cans sold in the Bay Area has left a bad taste in the mouths of some Oakland Athletics fans.

Livermore, California-based Altamont Beer Works has an A’s themed beer in its lineup dubbed the “Green Collar” pale ale. On the bottom of some cans, the company had “Viva Las Vegas” printed — apparently in response to the A’s year-long exploration of Las Vegas for possible relocation of the team to Southern Nevada.

The move was intended as a joke, but the company is catching some heat from Oaklanders.

Will MacNeil took to Twitter to display the message and his frustrations.

“Well @altamontBW never buying beer from you all again… wtf is this,” MacNeil tweeted.

Altamont responded to MacNeil on his tweet, which garnered 53 other comments as of Monday afternoon, chalking up the message as a joke.

“A little satire on the bottom of the can reflecting the frustration toward ownership and its treatment of their fans,” Altamont tweeted. “We did not mean to offend the Athletics fanbase we consider ourselves a part of.”

A little satire on the bottom of the can reflecting the frustration towards ownership and its treatment of their fans. We did not mean to offend the athletics fanbase we consider ourselves a part of.

The A’s have been looking for a new ballpark either in Oakland or Las Vegas.

In Las Vegas, the A’s have a list of five sites they could potentially build a $1 billion ballpark on in the Resort Corridor. Last week, A’s President Dave Kaval told the Review-Journal that two sites were viewed as frontrunners.

Kaval didn’t name the two preferred sites at that time, citing ongoing negotiations. But days later, Gaming & Leisure Properties Inc. noted it had a recent meeting with the team regarding a possible ballpark at the current site of the Tropicana.

In Oakland, the team and area officials continue to negotiate terms relating to a potential $12 billion development, which includes a waterfront ballpark. The team’s motto in the Bay Area is “Howard Terminal or bust,” the name of the potential stadium site. It is the only site in play in Oakland regarding the team’s future there.