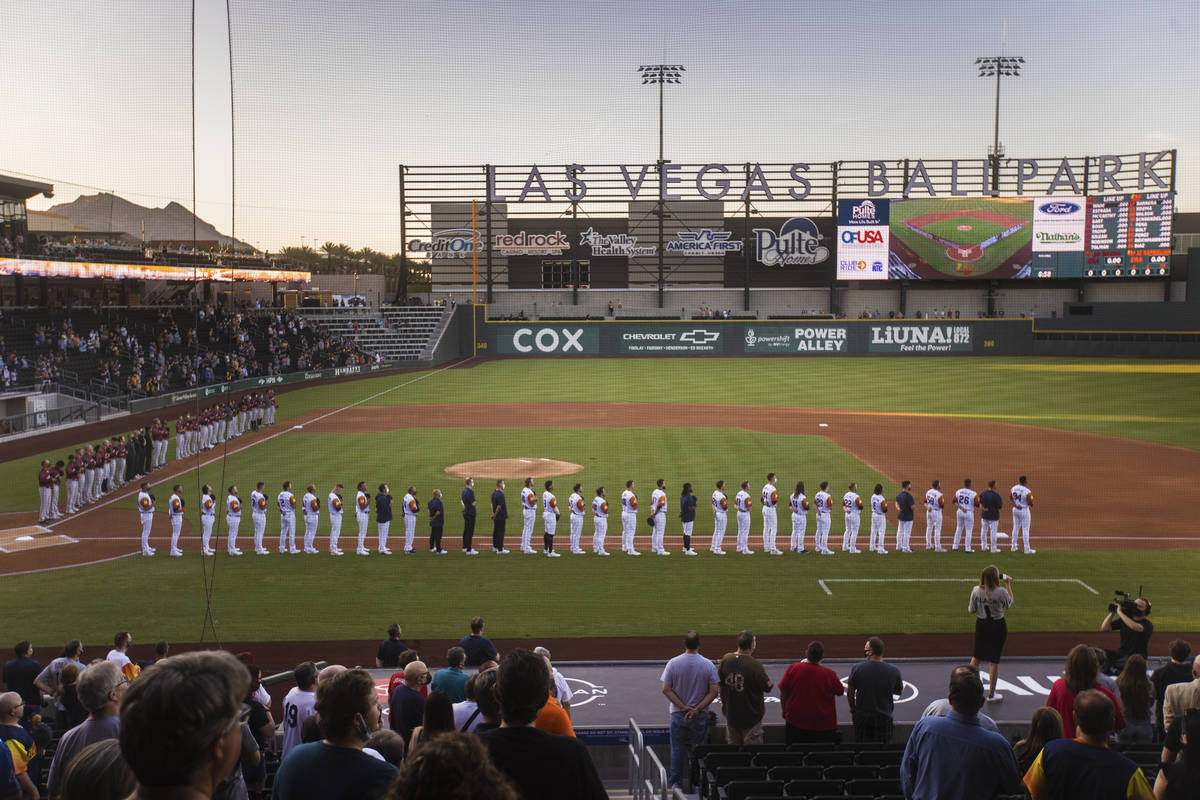 The national anthem is played before the start of a Triple-A baseball game between the Las Vegas Aviators and Sacramento River Cats at Las Vegas Ballpark on Thursday, May 6, 2021, in Las Vegas. (Benjamin Hager/Las Vegas Review-Journal) @benjaminhphoto

A weekly look at who and what is making news for the Aviators:

1. Baseball was back, and so were the fans. Well, at least half of them. The Aviators took the field for the first time in 602 days Thursday night, and though they lost 8-1 to Sacramento and the crowd was limited to half-capacity by COVID-19 restrictions, a good time was had by all (except those who complained about itchy seats.)

The lights are on…the crowd is here…

2. The loudest ovation at Las Vegas Ballpark on the first two nights of 2021 was reserved for Sacramento’s Drew Robinson, the former Silverado High star trying to make it back the big leagues after losing an eye in an attempted suicide. He went 0-for-8 with seven strikeouts in his first two games but his courage still is batting 1.000.

3. Aviators manager Fran Riordan thought this was the first time in minor league history that teams would play six-game series to reduce travel costs, but six-game series were the norm decades ago when the Pacific Coast League played 180-game seasons. “To be determined” the Las Vegas skipper said about the potential for familiarity breeding contempt among Triple-A clubs.

4. Skye Bolt probably didn’t know which way to turn upon arriving at Las Vegas Ballpark Thursday. The 2019 Aviators fan favorite was claimed off waivers by San Francisco and would have played for the Giants’ Triple-A affiliate Sacramento on opening night had he not been reacquired by the A’s and assigned to the Aviators just two days before.

On Saturday’s ⁦@SportsRadio1140⁩ ⁦@Audacy⁩ show, ⁦@AviatorsLV⁩ Skipper Fran Riordan talked about having to fill “the shoes” of 2019 fan favorite Skye Bolt. Today the ⁦@Athletics⁩ reacquired Bolt⚡️from the Giants and sent him to Triple-A Las Vegas. pic.twitter.com/xiFDPATlmt

5. Though it had been close to two years between games at Las Vegas Ballpark, the Aviators’ starting pitcher in the last game before the COVID shutdown and the first after it was the same guy. James Kaprielian was the losing pitcher in the final of a best-of-five playoff series against Sacramento in 2019 and also was tagged with the loss in Thursday’s opener.

6. You could tell that Thursday night’s return was a big deal just by looking at Chuck Johnson’s shoes. The Aviators’ GM broke out his baseball-inspired footwear — the leather looks like that of a baseball with red stitching on the toes — on the first opening day that coincided with his birthday.

Not only does our GM have the coolest shoes, but he also has the coolest birthday: TODAY!

8. Only the uniforms were different: Former Aviators pitcher Sean Mannea took a no-hitter into the eighth inning and his former Las Vegas teammate Seth Brown hit a walk-off home run to lift the parent Athletics to 2-1 victory over Tampa Bay Friday night.

9. The Aviators will wear their popular “Grateful Dead” uniforms for the first Reyes de Plata (Silver Kings) night of the season Tuesday, celebrating Las Vegas’ Hispanic culture and pioneering past. Nearly two-thirds of minor league clubs are expected to participate in the initiative this season.

10. Although the Aviators are currently limited to 50-percent capacity amid local and state COVID restrictions, Thursday night’s announced crowd was 5,002. No disciplinary action from the COVID cops is expected, though the Aviators were prevented from participating in that night’s “Price is Right” Showcase Showdown. 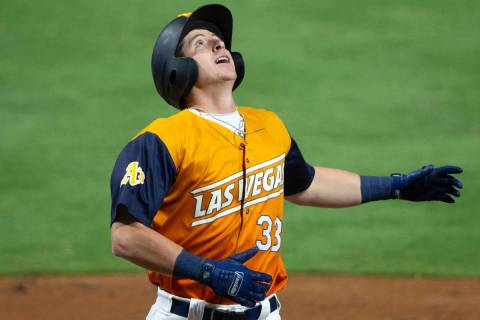 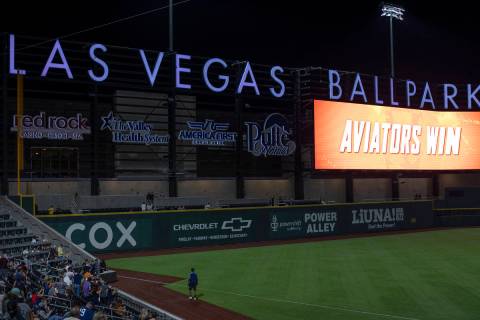 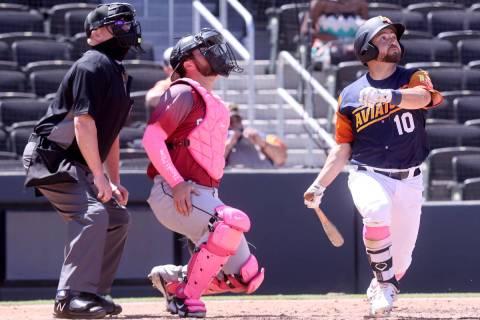 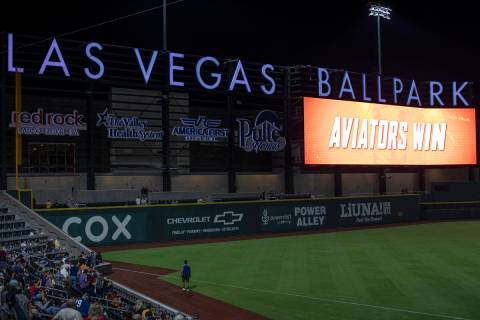 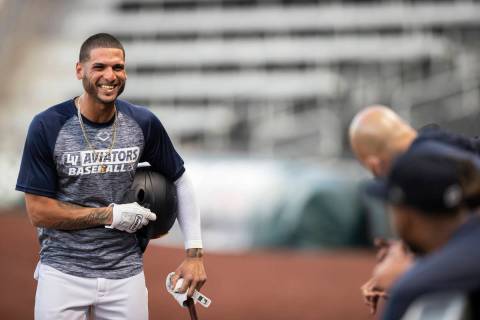 Luis Barrera had three hits and three RBIs, and Frank Swindell, Francisco Pena and Cody Thomas homered in the fifth inning as the Aviators beat the Sacramento River Cats. 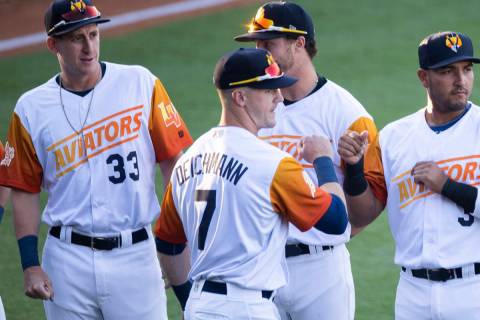 The Aviators took an 8-0 lead after four innings and cruised to the victory over the Sacramento River Cats. 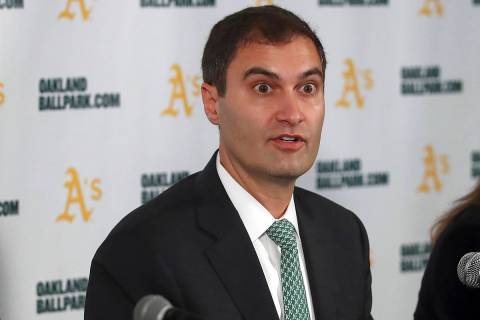 A’s president Dave Kaval sat down for an exclusive interview with the Review-Journal during which many topics regarding Las Vegas becoming the potential new home for the A’s were discussed. 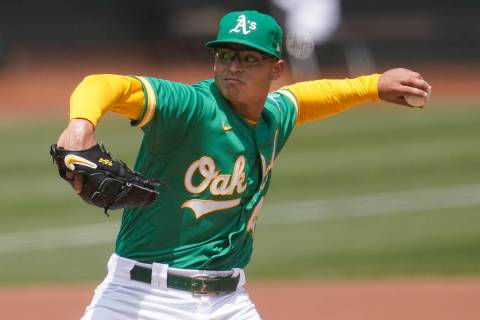 The Aviators were held to one hit and lost 5-0 last Sunday — the first time in 79 games at Las Vegas Ballpark they were shut out. Two days later, Las Vegas was blanked again, 12-0.