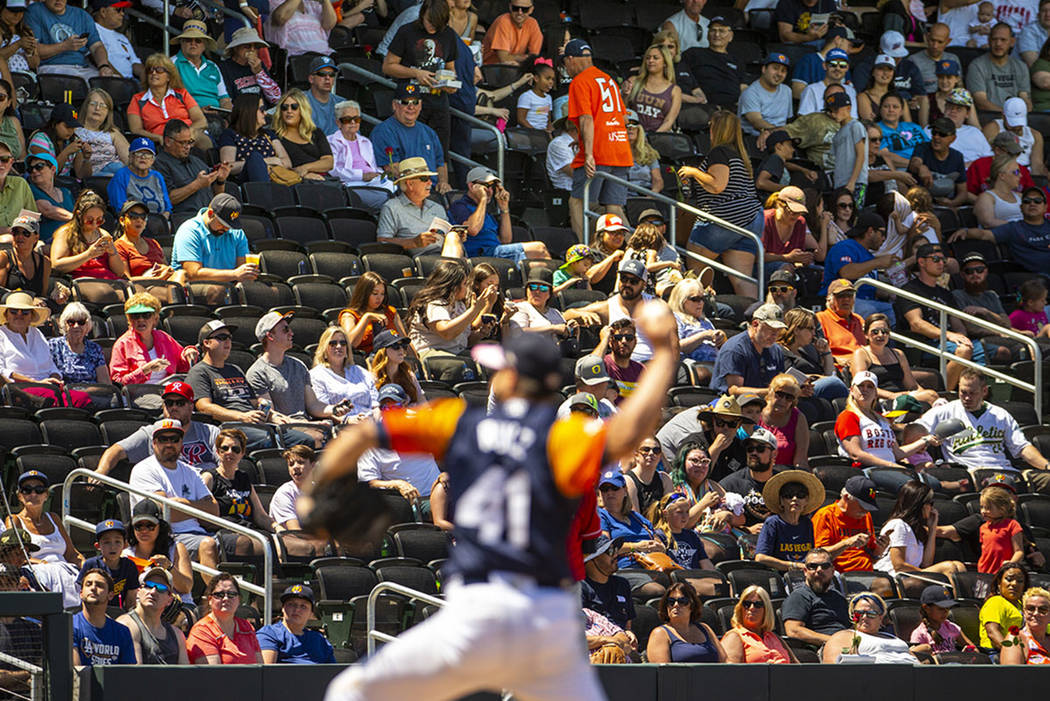 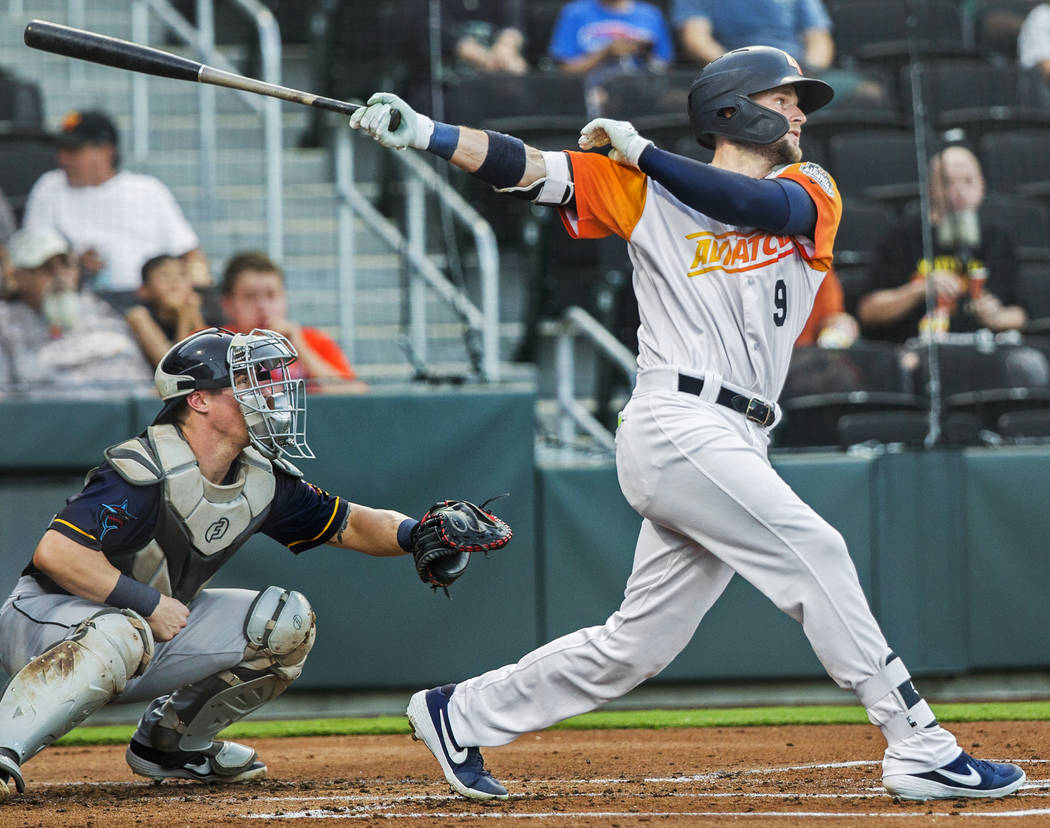 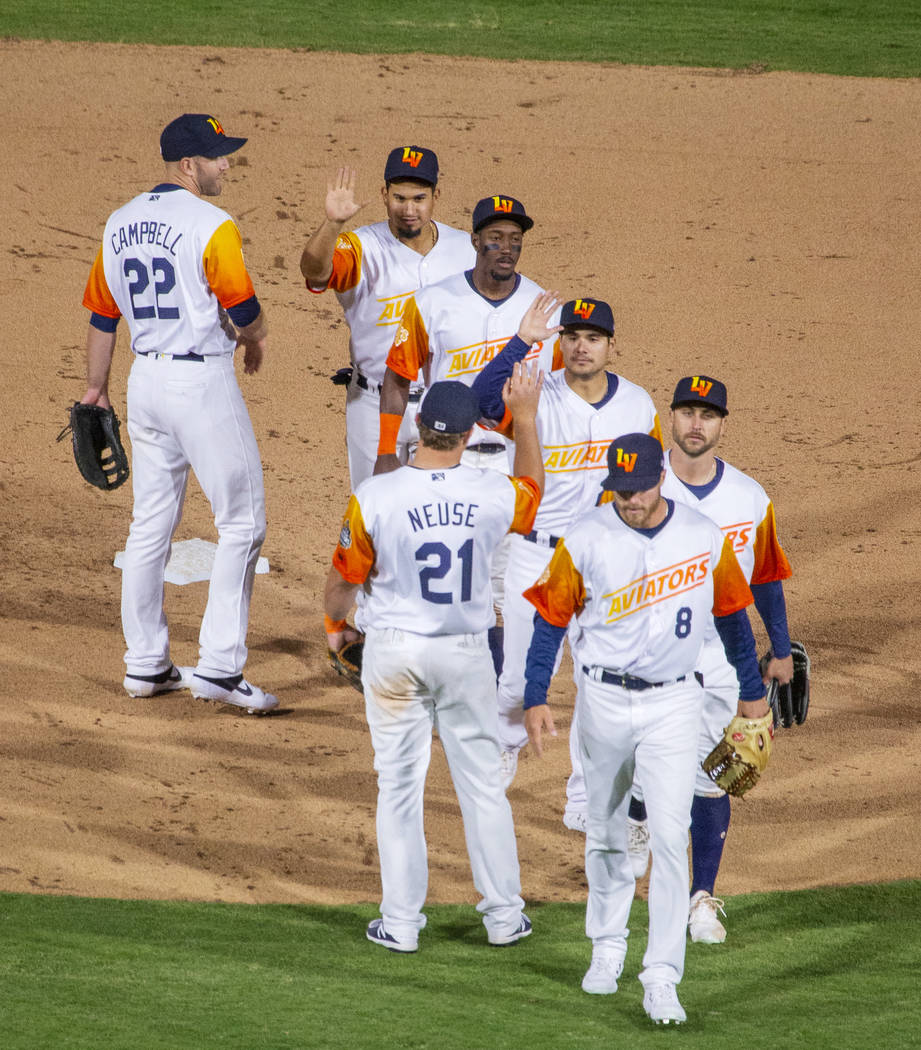 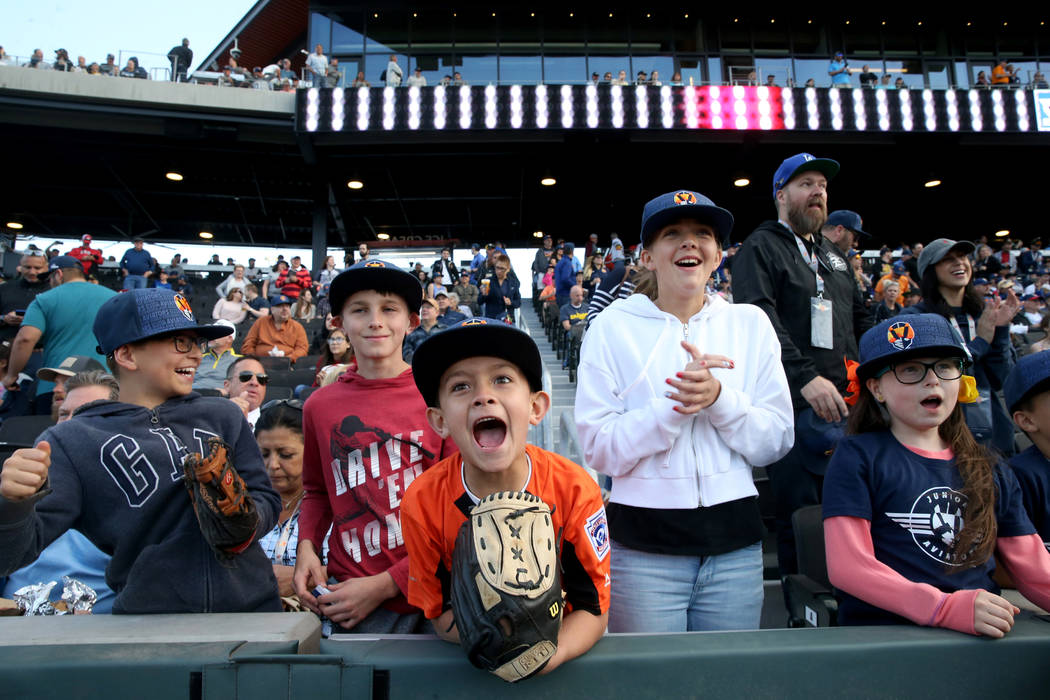 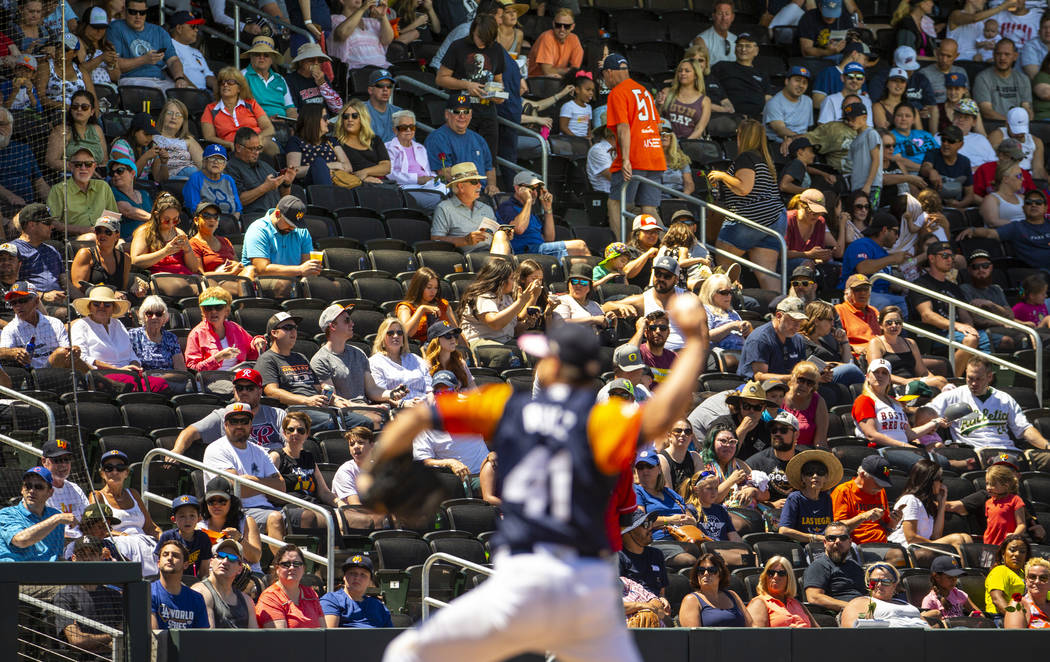 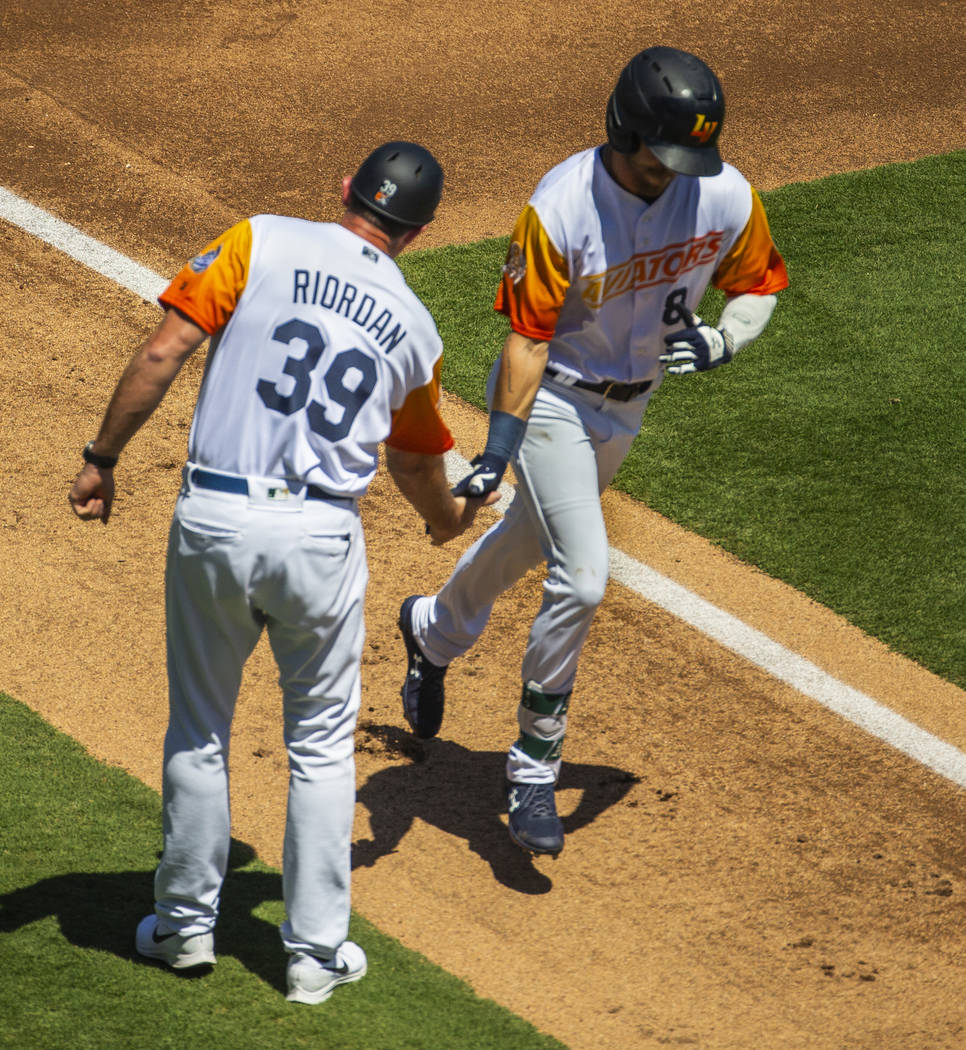 Aviators manager Fran Riordan (39) congratulates base runner Skye Bolt (8) on a score as he rounds third base headed for home versus El Paso at the Las Vegas Ballpark on Sunday, April 28, 2019. (L.E. Baskow/Las Vegas Review-Journal) @Left_Eye_Images 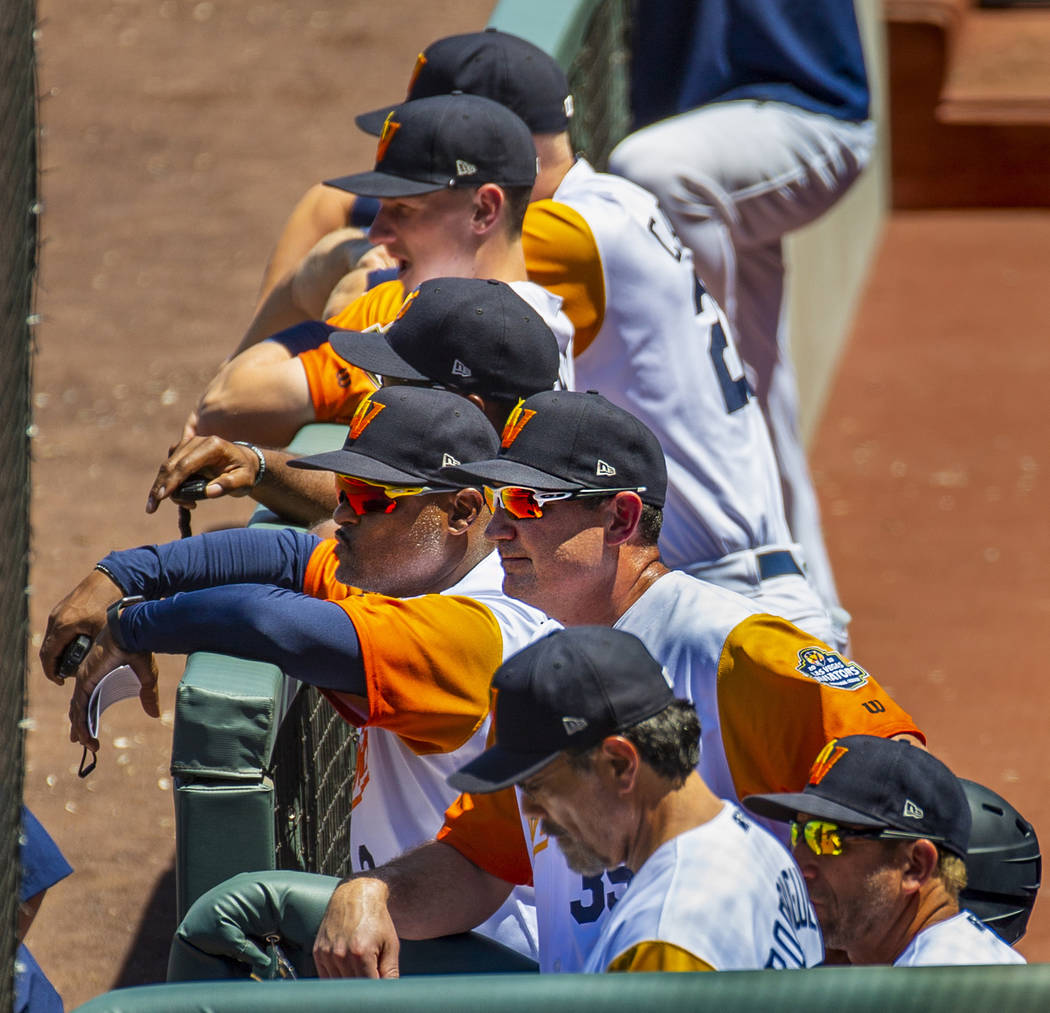 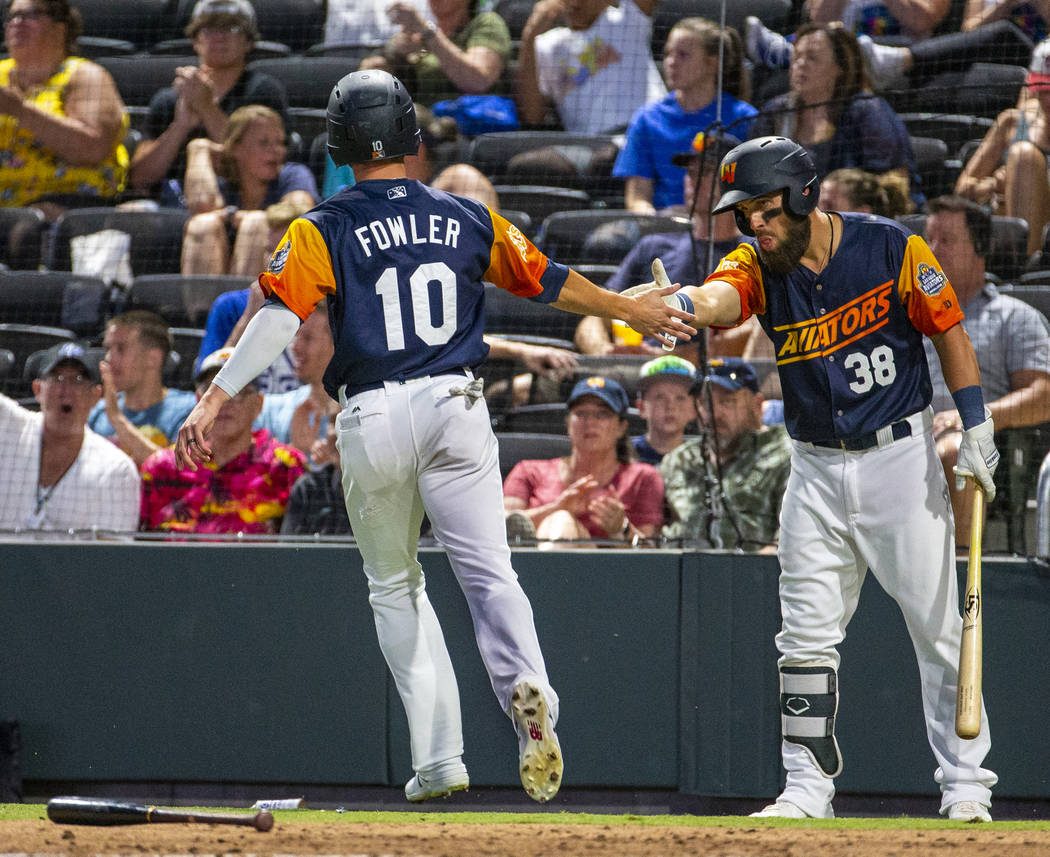 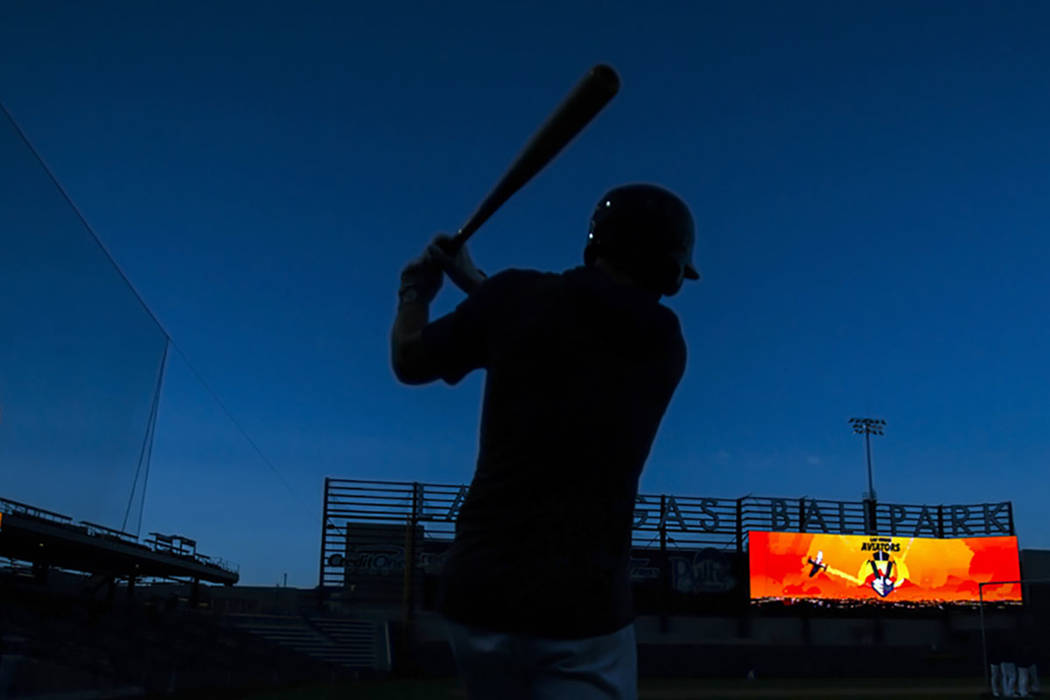 During a recent trip to Las Vegas to announce that the Triple-A National Championship Game would be played at Las Vegas Ballpark in 2020, Pacific Coast League president Branch Rickey III noted the difference in the weather since the last time he was in town.

It was hot and sunny — a far cry from a brisk April opening night at the new ballpark when high winds sent hot dog wrappers flying into the swimming pool beyond the outfield fence.

The cloud hanging over the downtown Summerlin venue on opening night was literal.

Now it is only figurative.

It was reported earlier this summer that officials in Henderson were quietly trying to lure the Arizona Diamondbacks from Phoenix, where efforts to build a new major league ballpark have stalled. And that was before Las Vegas Ballpark was christened and the Aviators began obliterating attendance records.

Should the Diamondbacks or any other Major League Baseball team come to Las Vegas, it likely would mean the end of Triple-A baseball in the region. Rickey said he sees that day coming like a batting practice fastball.

“Major League Baseball is interested in any market where baseball seems to be a hot product,” he said.

“We knew this was going to happen before it happened.”

There is irony in Rickey being asked again about the future of Triple-A baseball in Las Vegas: It was four years ago this week that a toilet behind the first-base dugout at Cashman Field backed up and spewed raw sewage into the home team’s dugout.

An exasperated Rickey wrote a letter to the Las Vegas Convention and Visitors Authority, then the team’s landlord, expressing the need for a new ballpark. Three years later, ground was broken on Las Vegas Ballpark.

Given MLB’s apparent interest in Las Vegas, some are now questioning if that was the right move.

Others aren’t as skeptical.

“This market is not ready for major league baseball, (unless) there’s a multibillionaire out there who wants to build a billion-dollar domed baseball stadium,” said Clark County Commissioner Larry Brown, who pitched in the first Triple-A game at Cashman Field as a member of the Las Vegas Stars and still serves as the team’s director of business development. “But the 81-game home schedule, the numbers don’t pencil right now.

“How other teams that are drawing 10,000 people a night survive is through (a high demand for) TV rights, through cable rights. And we don’t have those here.”

What would be the Aviators’ fate should the Diamondbacks or another team disgruntled with its ballpark situation — or an expansion team, as one of Manfred’s goals is to add two franchises for a two-league setup of 16 teams each — stake a claim in Las Vegas?

“There’s a process by which Major League Baseball acquires a territory,” Rickey said of baseball’s Rule 52, which states that a major league team wishing to relocate within a 15-mile radius of an existing minor league club must acquire those rights through a formal notification.

Rickey still was president of the American Association when the Diamondbacks joined the National League and sent the PCL’s Phoenix Firebirds packing. But he was directly involved with the negotiations when MLB expanded to Colorado in 1993 and the Triple-A Denver Zephyrs were relocated to New Orleans to make room for the Rockies.

“There was a seven-member panel, and the results of the Denver arbitration were then applied to the Phoenix situation,” he said.

While the PCL’s Tacoma Rainiers and the International League’s Pawtucket Red Sox continue to coexist in close proximity to major league teams in Seattle and Boston, Las Vegas probably doesn’t have the fan base to support both major league and Triple-A baseball as well as the NFL’s Raiders and the NHL’s Golden Knights — and an NBA team, should MGM Resorts ultimately be successful in bringing one to town.

Rickey said that is a moot point, anyway.

“If a Triple-A team is successful, it’s going to subtract from the success of a major league club,” he said. “So Major League Baseball does not want a Triple-A team within the (same) metropolitan area.”

Were it to happen, $150 million Las Vegas Ballpark would become obsolete. It was not built with the infrastructure to expand to the major league specification and is restricted by its downtown Summerlin location. Obtaining the land and financing for a new ballpark could further delay the arrival of major league baseball, Rickey said.

But when all the ducks are on the pond, what invariably happens — what happened in Denver and Phoenix — is that the Triple-A team moves to another city.

If the Aviators were to move, the $4 million annual fee paid by the LVCVA to the Clark County Stadium Authority for the naming rights to Las Vegas Ballpark would be waived. The contract states the agreement, which runs through 2038, may be terminated by the LVCVA without liability if the team folds or moves, of if the ballpark is converted for another use.

As for the ballclub itself, San Jose and San Bernardino, which host teams in the Class A California League, and Tulsa, Oklahoma, and Frisco, Texas, of the Double-A Texas League could be landing spots for the Aviators should major league baseball come to town. Rickey said the Aviators could even swap cities with a major league team that moved to Las Vegas.

Howard Hughes Corporation, which purchased the club along with Play Ball Owners for $20 million in 2013 and later acquired Play Ball’s 50 percent share, would benefit from a territorial buyout or even selling the team. The franchise’s worth before moving into a new ballpark and doubling attendance was estimated at $30 million.

But as the announcers like to say when the home team falls behind early, there’s still a lot of baseball to be played before the landscape shifts. If it shifts at all.

Until then, Aviators president Don Logan says nothing really changes, with the exception of the team’s roster following September call-ups.

“One hundred percent of our attention is focused on continuing the unbelievable first year we’ve had,” Logan said. “We have to control and perform to the best of our ability what we can control.

“All the other stuff you hear about, you can’t worry about it.”