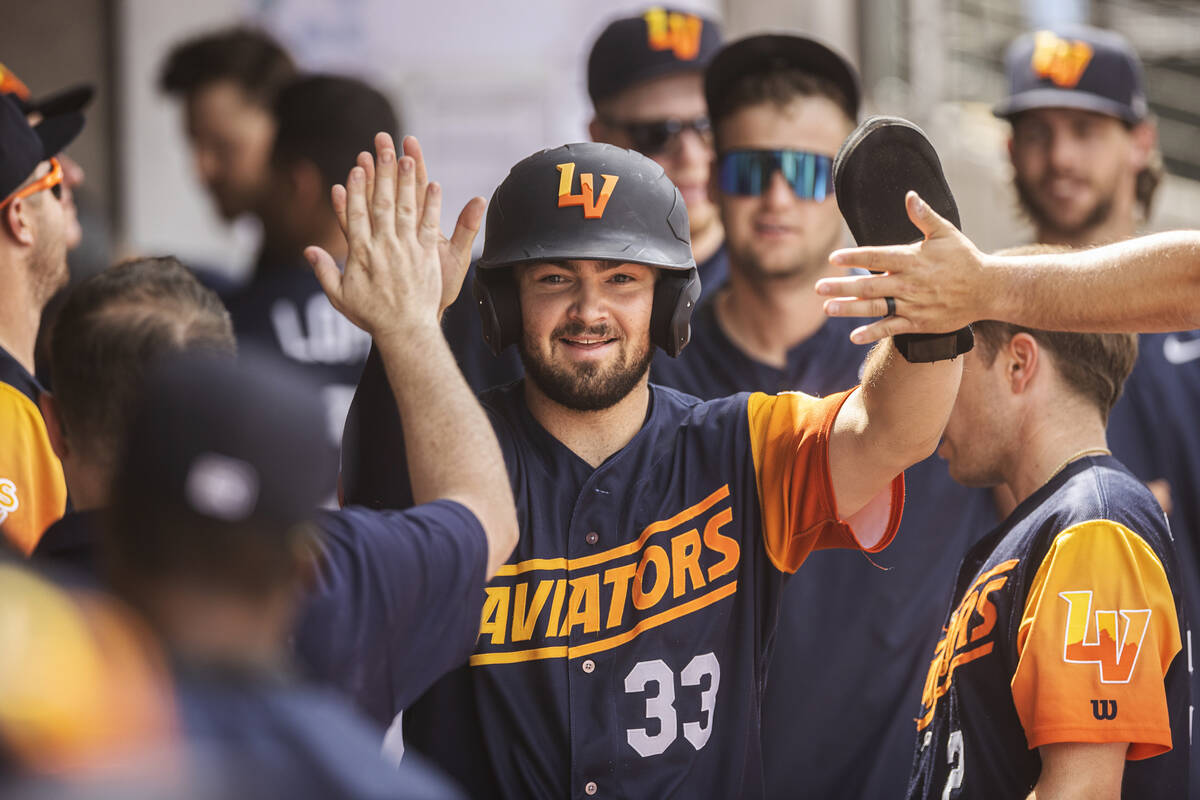 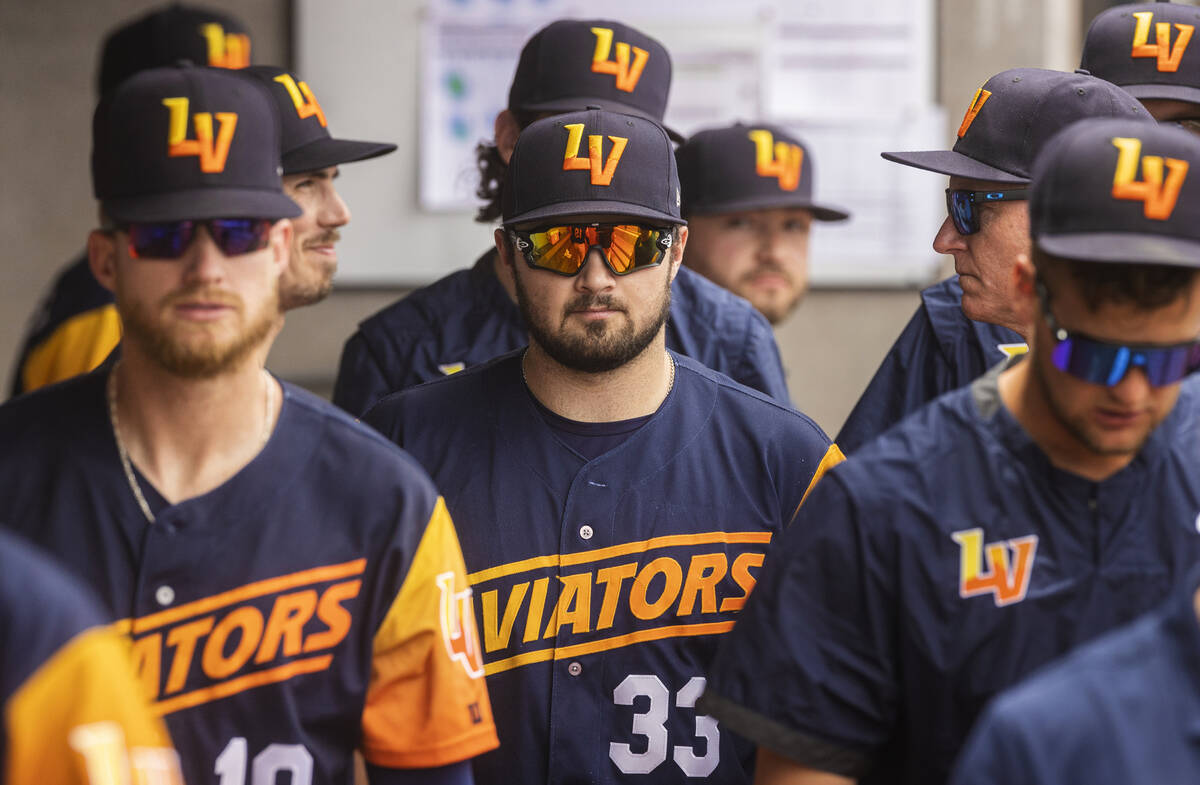 Aviators catcher Shea Langeliers (33) stands in the dugout with teammates during a minor league baseball game against the Salt Lake Bees at Las Vegas Ballpark on Sunday, May 15, 2022, in Las Vegas. (Benjamin Hager/Las Vegas Review-Journal) @benjaminhphoto 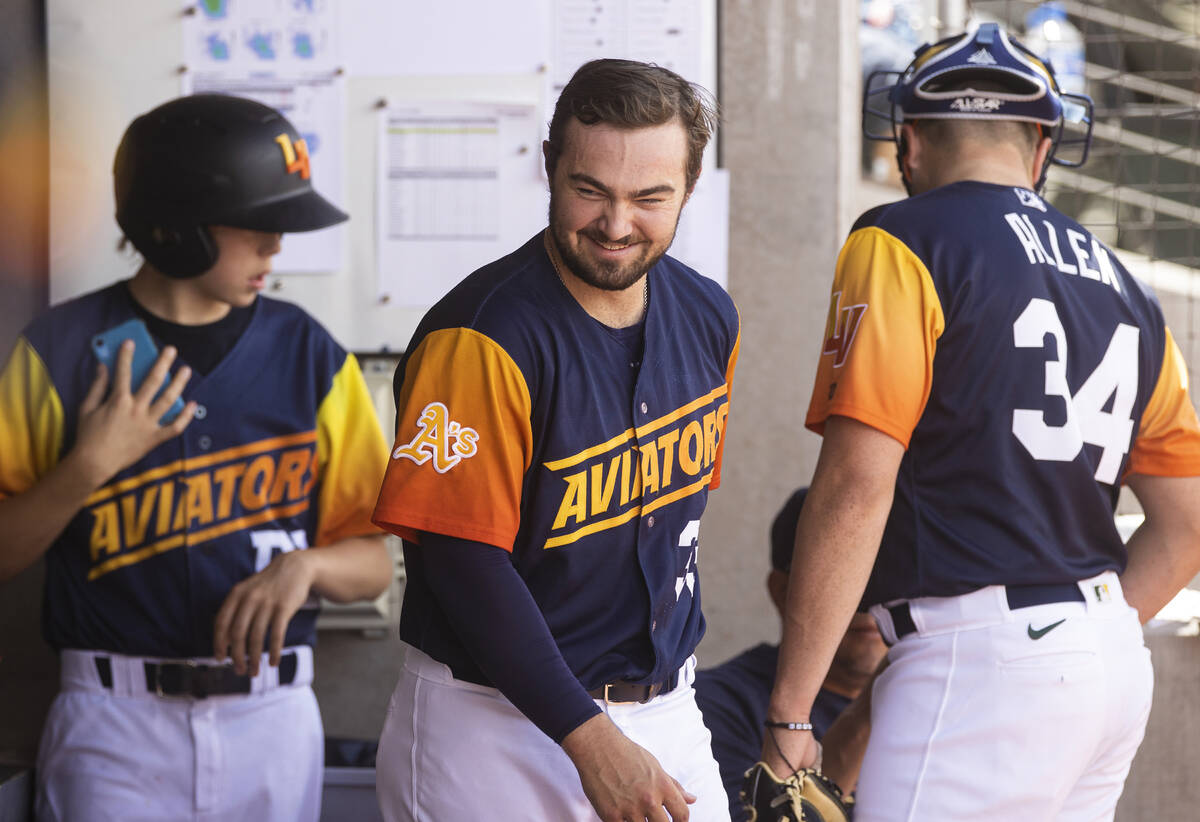 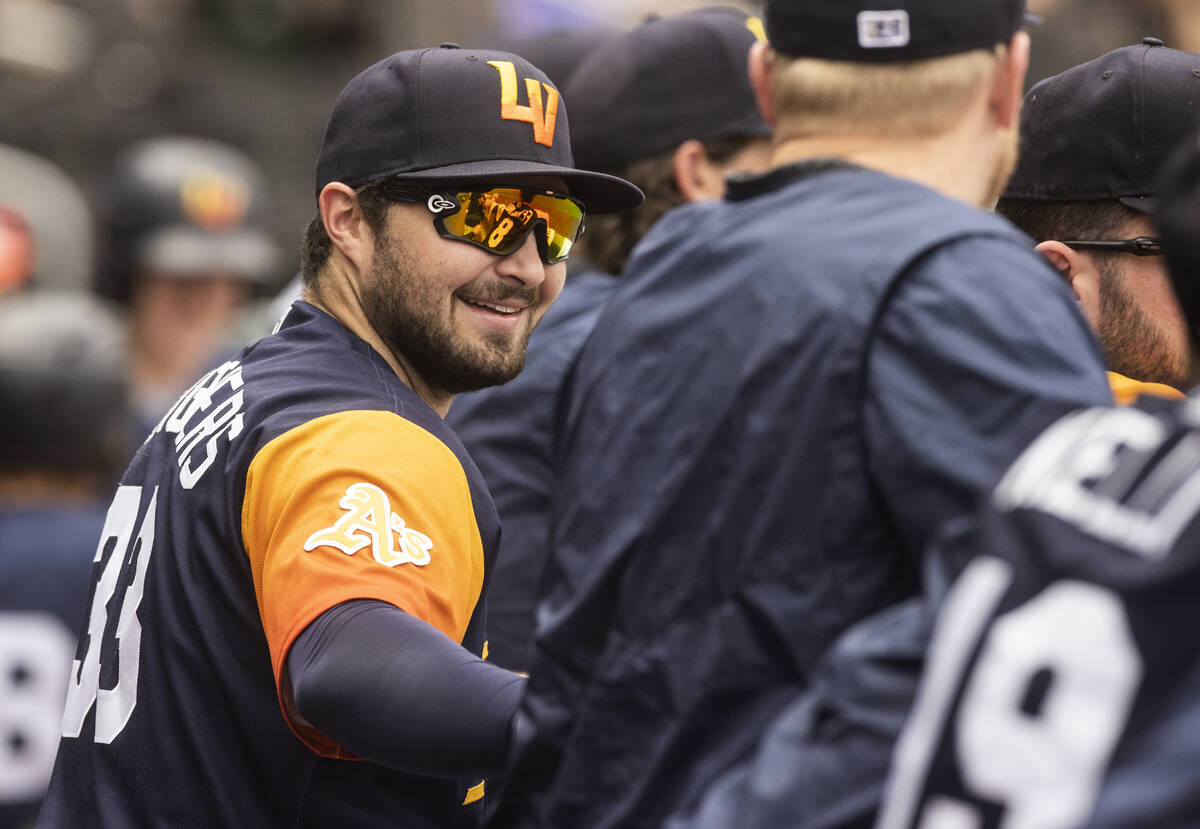 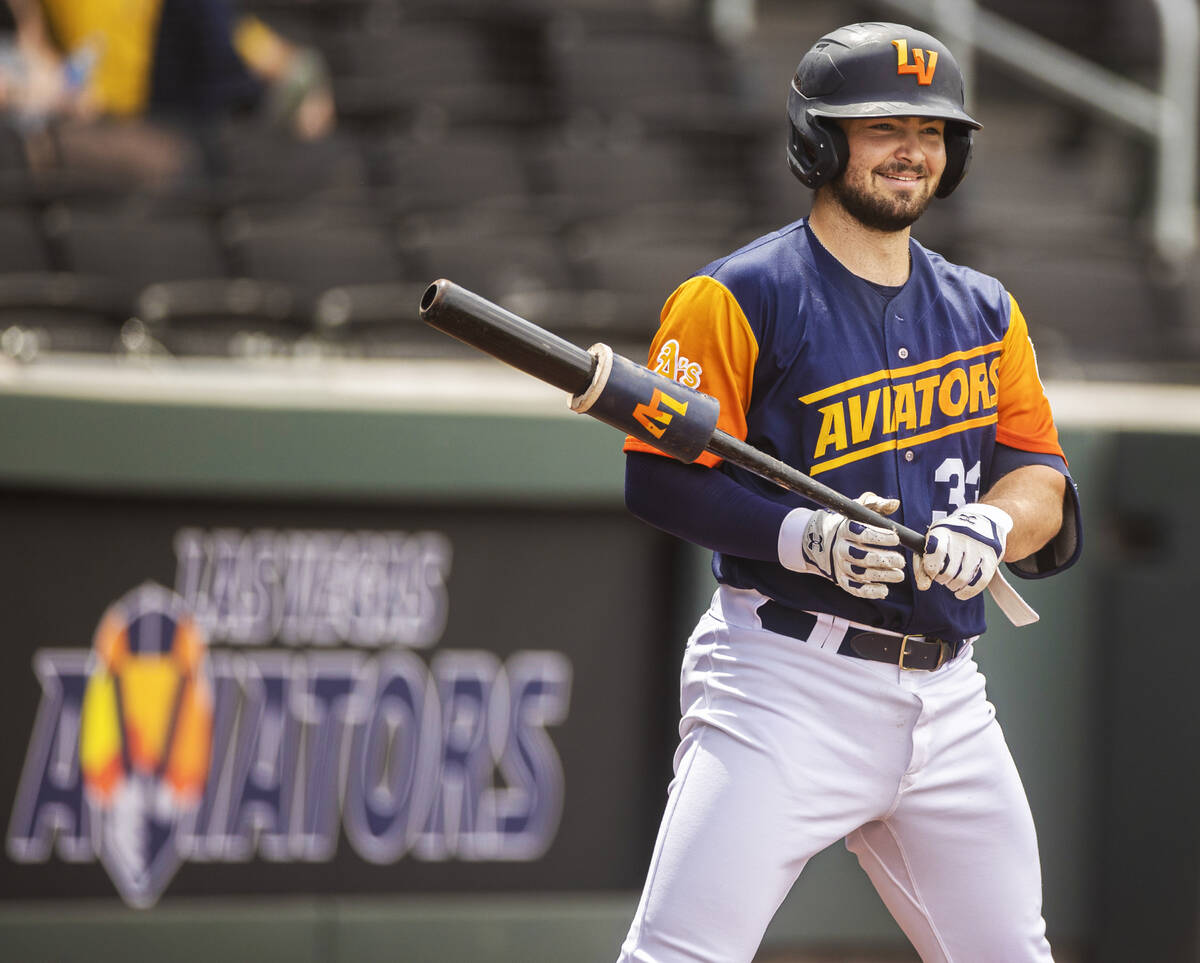 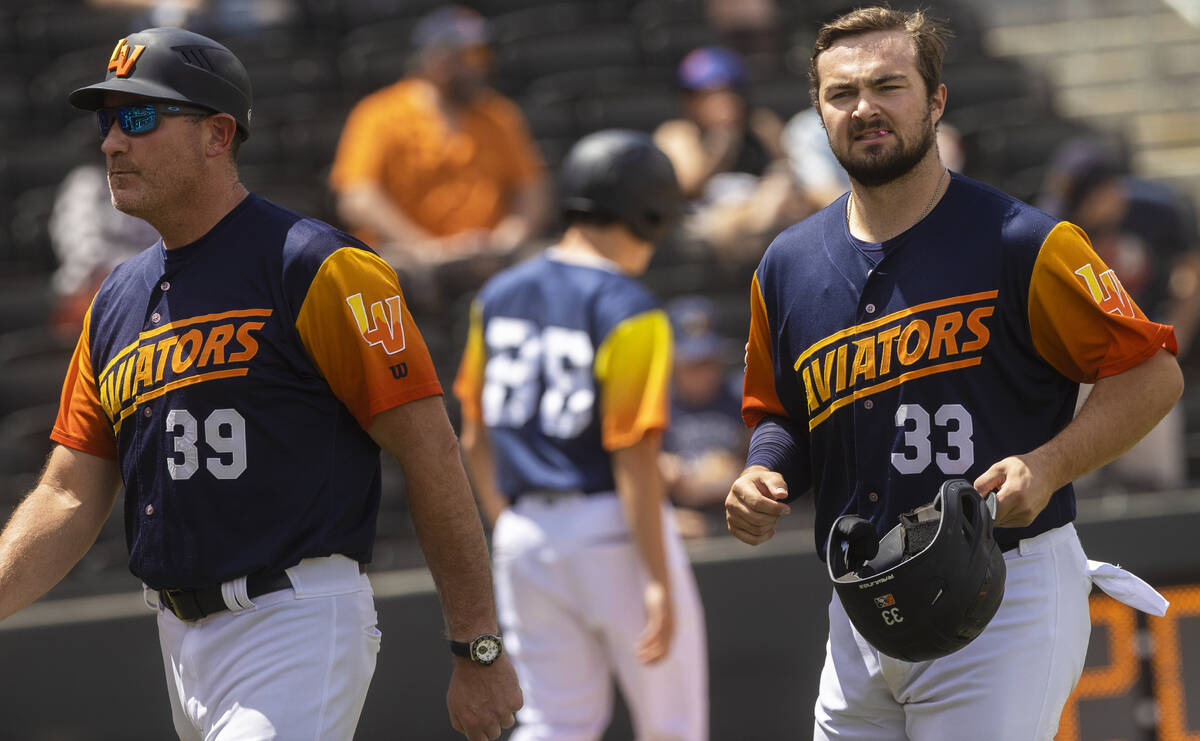 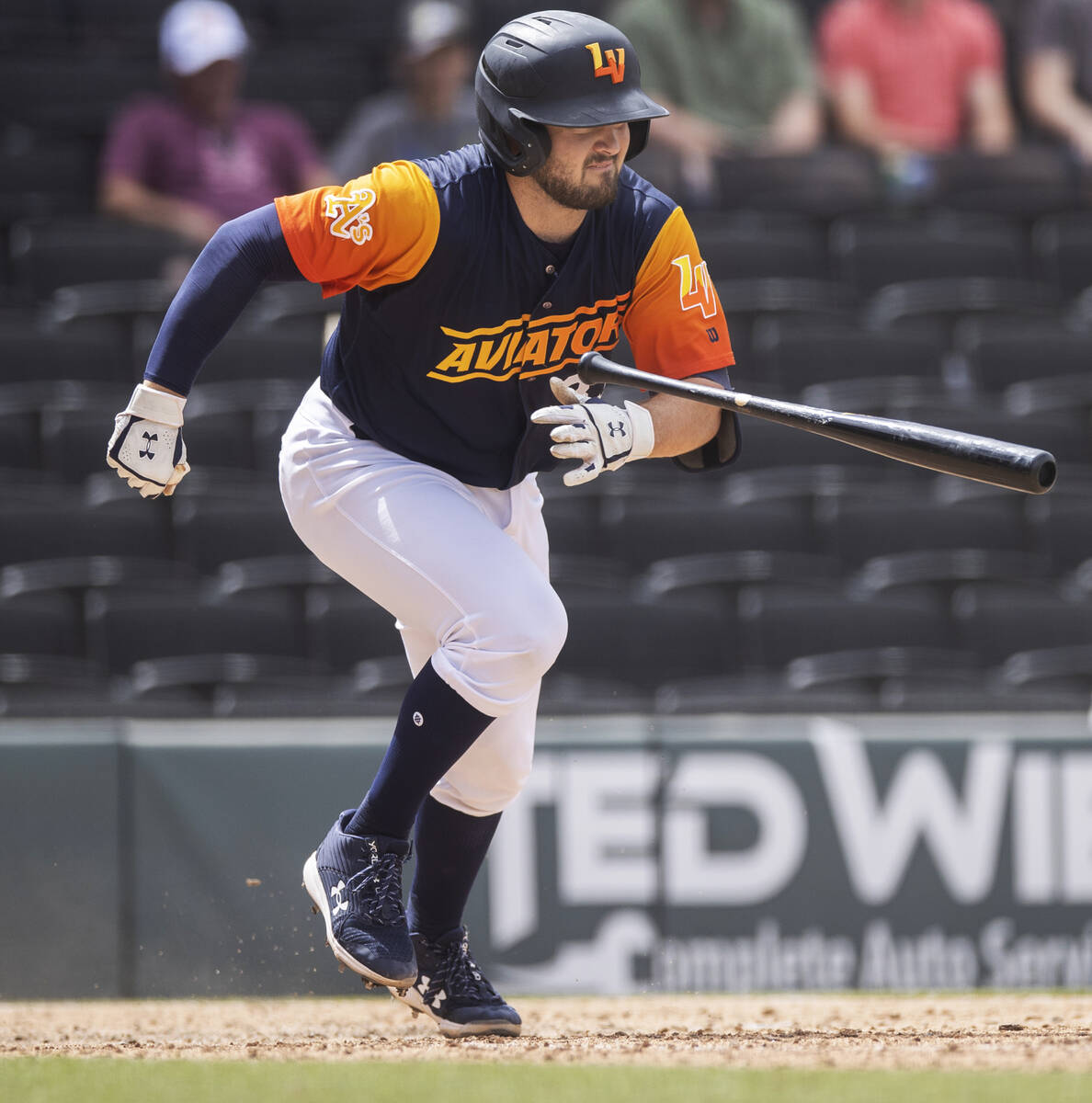 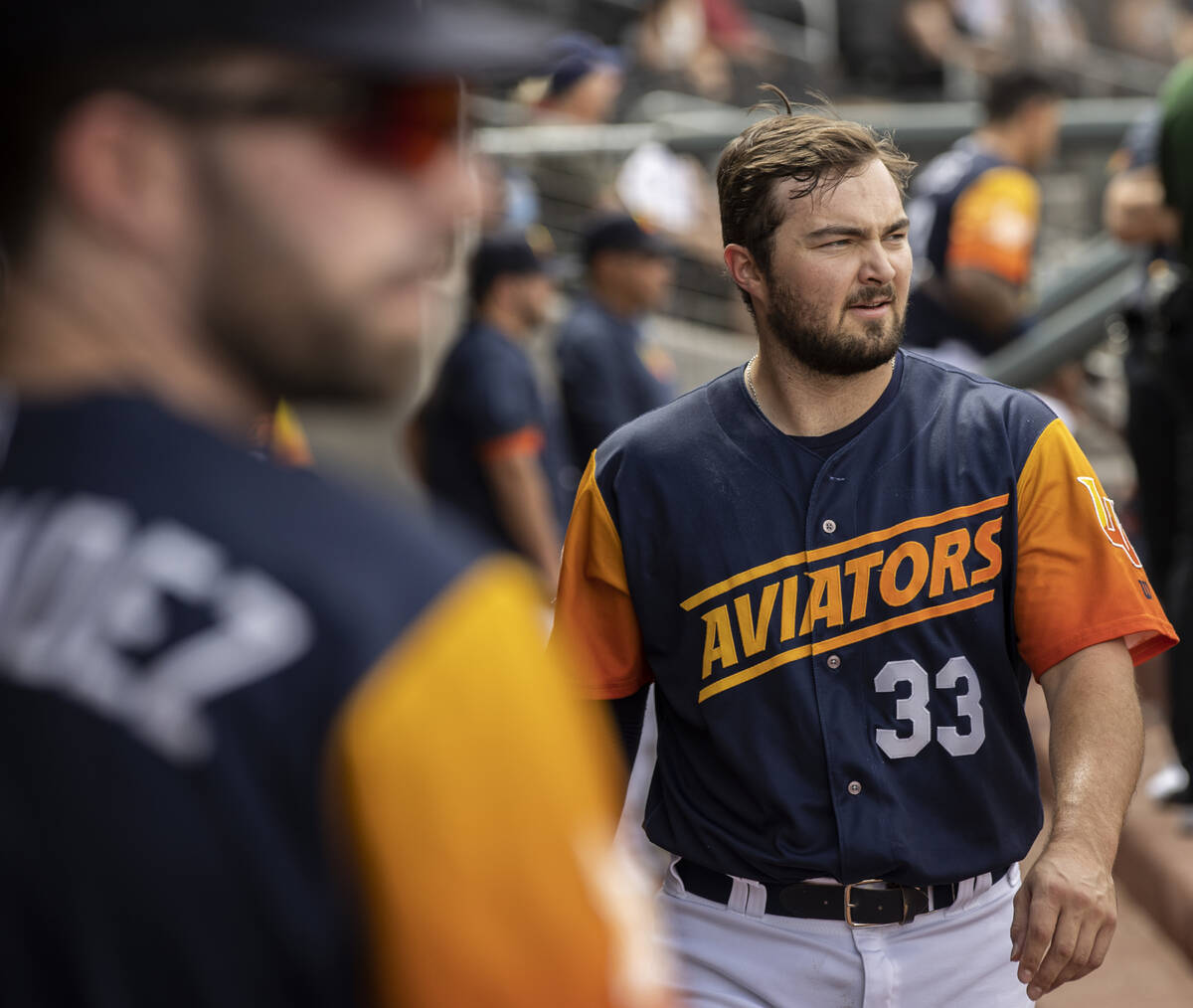 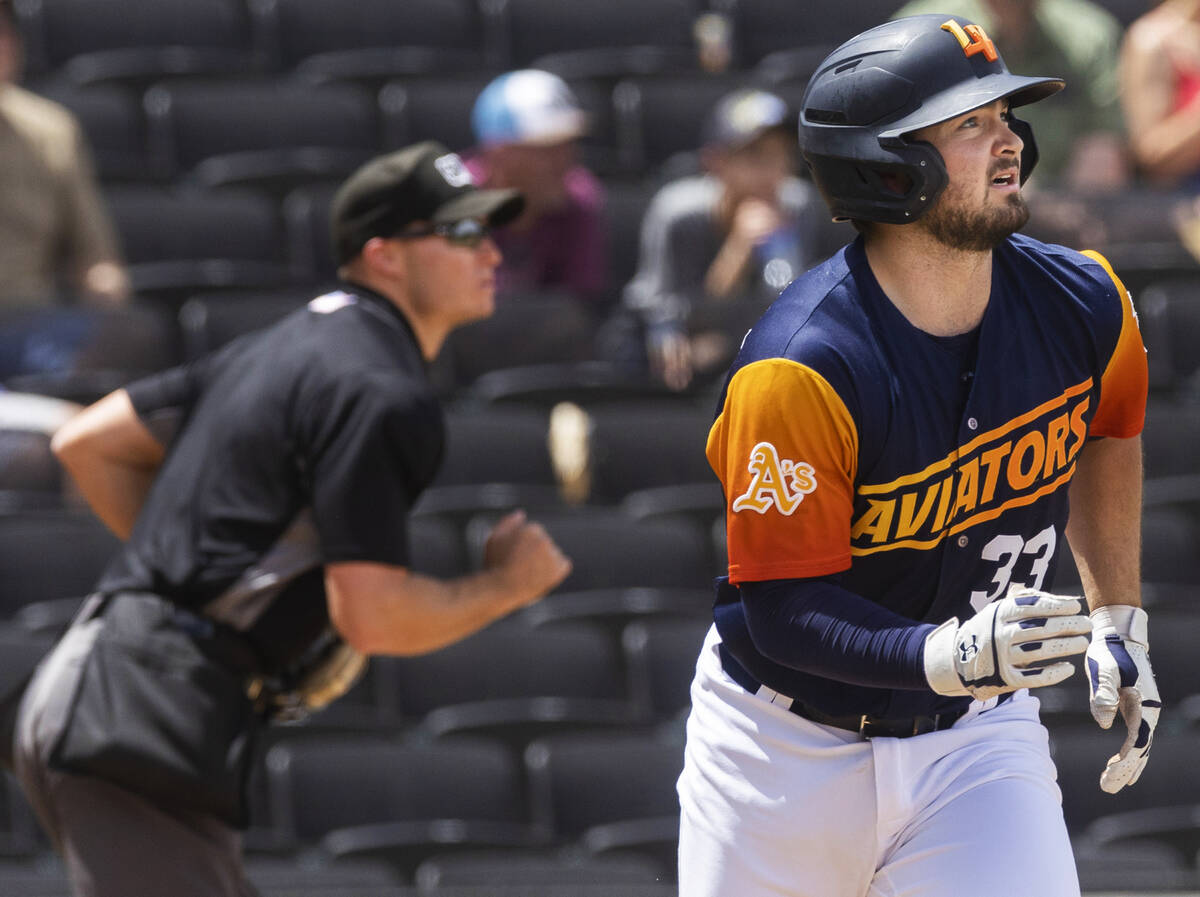 Aviators catcher Shea Langeliers was dealt a curveball before the season when he was traded by the Atlanta Braves to the Oakland A’s as part of the deal for All-Star first baseman Matt Olson.

As the 24-year-old moved across the country, he had to prepare for a new league, organization and teammates — less than a month before opening day.

Getting acclimated to his new environment was going to be a challenge. But Langeliers quickly showed his new club he was willing to take the necessary measures to get ready for the season.

“It can be overwhelming, but he’s taken everything in stride,” Aviators manager Fran Riordan said. “He has a laserlike focus on the task at hand and on what he needs to accomplish on a given day. He makes the most out of the opportunity he has.”

The offseason work has paid off for Langeliers. Oakland’s No. 2-ranked prospect is playing up to expectations, placing in the top 10 of almost every major offensive category in the Pacific Coast League.

Langeliers is second in the PCL in home runs with 11 with a .605 slugging percentage and .997 OPS that are both sixth best. His performance has helped put the Aviators in first place in a tight PCL West Division.

The team immediately saw that Langeliers would fit in. His approach to the game and effort to connect with his teammates has helped create an environment that Langeliers has been able to thrive in.

“He’s very humble about the start so far,” Aviators reliever Parker Markel said. “You wouldn’t be able to tell the difference if he’s doing really good or really bad because he’s still the same guy every day.”

Langeliers prides himself on consistency in his routine. A larger component of his routine includes game planning.

“The higher you get up through the system … the preparation is on another level,” he said. “These guys know what they want to do, and they’re really good at doing it.”

As much as Langeliers’ hitting is getting a lot of attention, he knows the importance of putting in work behind the plate.

“You control the flow of the game,” he said. “Everything is a little bit more magnified because you’re involved in every pitch.”

His first priority when he came to Las Vegas was creating chemistry with the pitching staff. Establishing trust between the pitchers and their new catcher was going to be the biggest challenge for Langeliers.

He has seen that trust grow, and his confidence in the pitchers is helping them work together to build a game plan for batters.

Markel credits Langeliers’ communication for the strong relationship he’s built with the pitchers.

“He’s got it figured out,” Markel said. “He’s on another level compared to other catchers I’ve worked with.”

Langeliers also has helped his pitchers with his strong arm. He’s thrown out 10 runners for a 33 percent success rate.

“The way he’s getting the most out of our pitchers and how much he really cares about the pitcher’s success on the mound, you have a guy that’s really making an impact on both sides of the ball,” Riordan said.

At his current pace, it’s only a matter of time before Langeliers gets a call to Oakland. Riordan and Markel think he could make an immediate impact.

“No matter when that call comes, I have full confidence that he will be ready to be a really good major league player,” Riordan said.

Langeliers knows the spotlight is on him, but is confident his work ethic has him prepared for the majors.

“If and when that day comes, I’m really going to be prepared for that,” he said.