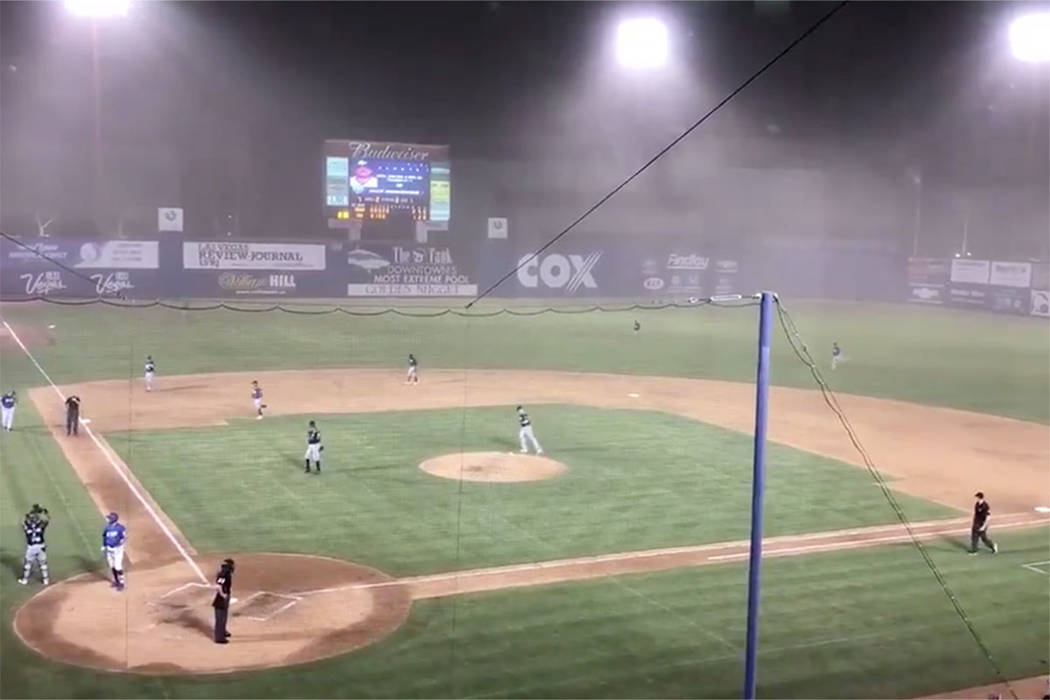 The 51s and Aces cruised through the first four-and-a-half innings of Saturday’s game.

And then the dust rolled through.

Around 8:30 p.m., strong winds picked up and swirled trash around the field, briefly shut down the power and forced the two teams off the field.

Rain followed and then the game was suspended.

Las Vegas was down 2-1 to Reno with one out in the bottom of the fifth inning and since it was not yet official, it will be continued on Sunday at Cashman Field as part of a doubleheader starting at 5:30 p.m.

Sunday’s regularly scheduled game will now be seven innings and will start 30 minutes after the conclusion of the first game, which will pick back up in the fifth inning and go nine.

“I’ve been in Midland, Texas, when the wind’s kind of like that but not the dust like that,” manager Tony DeFrancesco said. “It’s probably up to 50 miles an hour winds it seemed like.”

DeFrancesco said they would probably pick back up with reliever Gerson Bautista pitching and use the bullpen from there on Sunday.

Neither team had generated much offense, with starter Scott Copeland giving up just two runs in his five innings pitched.

Trash is flying all around and the power briefly went out here at Cashman. pic.twitter.com/c8UoR31JKG

Both came in the fourth inning as the Aces (61-56) scored on a Rey Fuentes groundout and Juniel Querecuto single to left.

The 51s only run of the game came in the second on a Jose Lobaton double.

Lobaton was later subsequently doubled up on the next play.

“Copeland did well. He gave up two runs in this ballpark. One ball was down the line, struck out a few guys,” DeFrancesco said. “That Feliz guy he was throwing the ball well. We couldn’t really barrel him up. Lobaton didn’t know the outs, that could have cost us something but we’ve still got some at-bats. Hopefully we score some runs tomorrow.”