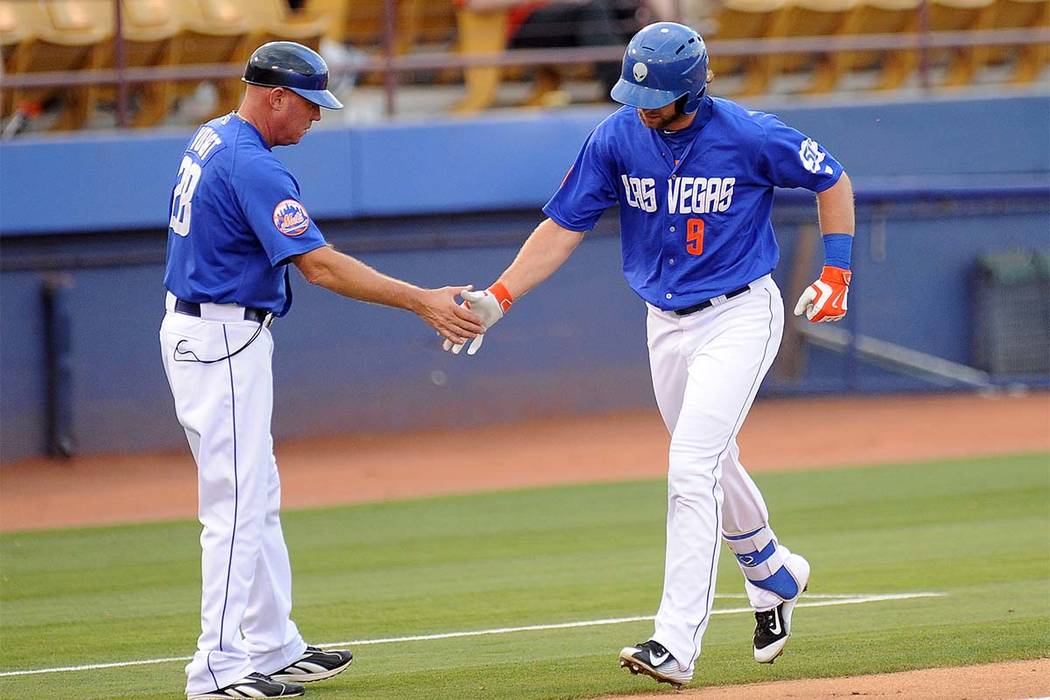 Las Vegas 51s base runner Kirk Niuwenhuis (9) high fives third base coach Jack Voigt after hitting a three-run home run against the Sacramento River Cats in the first inning of a Triple-A minor league baseball game at Cashman Field Friday June 26, 2015. Voigt tweeted Thursday night that he would not be returning for the 2018 season (Josh Holmberg/Las Vegas Review Journal)

The 51s’ coaching staff will have at least one new face next season.

Hitting coach Jack Voigt tweeted Thursday night that he would not return for the 2018 season.

Thx to all my hitters in my 12 years with Mets. Disappointed I will not be back in 2018. Loved helping you all reach ur dreams to play MLB.

“Thx to all my hitters in my 12 years with the Mets. Disappointed I will not be back in 2018. Loved helping you all reach ur dreams to play MLB,” Voigt wrote. “And thanks to #LV51 fans for 3 great years. 5 hitters in top 6 of PCL batting over 2 seasons ain’t bad! But wasn’t good enough, I guess.”

Voigt, who played in the majors during the ‘90s, was first hired by the Mets in 2006 as a scout. He had also served as a hitting coach and outfield and baserunning coordinator in the organization before becoming the 51s’ hitting coach in 2015.

No announcements have been made regarding manager Pedro Lopez or pitching coach Frank Viola’s status, though a recent report in the New York Post suggested that Viola is “unlikely to be considered” for the major league pitching coach job and that it was “unclear if Viola will remain in the organization.”