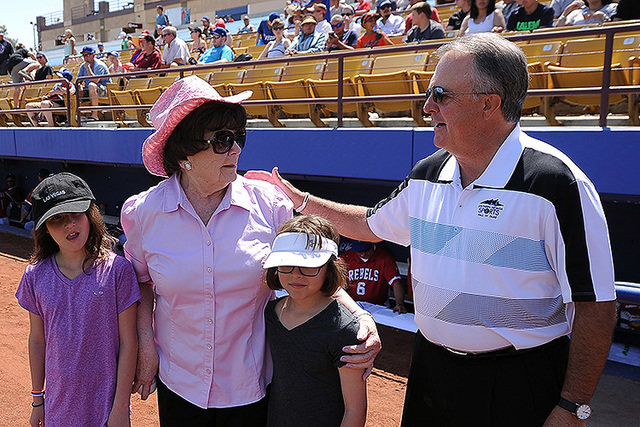 It might have seemed like an odd match at the time — at least geographically — when the Las Vegas 51s and New York Mets first struck a deal.

But so far, the partnership has worked out for both despite the more than 2,500 miles separating Cashman Field and Citi Field.

The 51s are now in their fourth year of being the Mets’ Triple-A affiliate and at the end of this season, the player development contract is up. While both sides have the option to look elsewhere after the contract expires, they seem to be happy with each other.

Don Logan, 51s president and COO, said they’ve had talks already, but nothing substantive yet.

Though some teams have already reupped their player development contracts, talks generally ramp up later in the summer.

Player development contracts are signed for two or four years and run up after even seasons, creating movement every couple years.

“It’s still early but at some point, around the All-Star break, I’m going to ask them, ‘Hey, what do you guys want to do?’ And they may want to take a look and see if there will be an opportunity closer to New York and I’d certainly understand that,” Logan said. “I’d hate to see that happen because I think the Mets are a great affiliate.”

While the Mets could opt to look elsewhere for that reason, the distance hasn’t been as much of an issue as it might seem.

“We have so many flights every day, all day going everywhere,” Logan. “It really is easy to get in and out of Vegas to get to wherever you need go to.”

And while the most common need is to shuttle players between Las Vegas and New York, the Pacific Coast League stretches as far East as Tennessee and the Mets make trips out West, too.

Earlier this month, when the Mets called up pitcher Sean Gilmartin, he met the team in Los Angeles.

“I get that it’s a long ways away but I also get it that we can watch the (Mets) games and if there’s an injury, I know that I’m taking somebody out ahead of time. It’s been great here. It really has. I didn’t think that it would be when we first came here, but the travel’s been easy,” 51s manager Wally Backman said. “If we’ve got to get a player to New York and he’s on a flight at night, he’s not going to get there any faster from Buffalo (New York), where we were at before.”

Distance aside, the partnership has been smooth in part because Logan has had longstanding friendships with members of the Mets’ front office, including general manager Sandy Alderson.

“We had some history with Don. I know Sandy Alderson and he went way back and so it was a real comfortable relationship right from the get-go,” Mets assistant general manager John Ricco said. “I think right from the beginning we’ve had a really positive working relationship with Don and his group.”

The partnership has yielded success in the past four years, both for the 51s and in player development.

Many of the current Mets have swung through Las Vegas at one point or another and both Noah Syndergaard and Steven Matz, who started World Series games last year, began the 2015 season with the 51s.

With the talent he’s been given, Backman has led the team to two first-place finishes and one second in his three full years. At 24-18 after Sunday’s victory at Colorado Springs, the 51s are in first place once more.

“The team’s been successful on the field. We’ve had plenty of players come through here, develop and turn into people who helped us get to the World Series last year. A lot of them,” Ricco said. “So we feel like it’s working for both of us. Players come here, have a good experience and ultimately come up to the big leagues to help us.”

While the facilities at Cashman Field continue to lag behind the rest of the Pacific Coast League and the 51s would like to build a new stadium in Summerlin, Ricco said everything he’s heard this year about the facilities has been positive, especially when it comes to the field itself.

And so when discussions pick up, Logan is hopeful Las Vegas can keep the Mets around, saying it would be the “best scenario,” for the 51s.