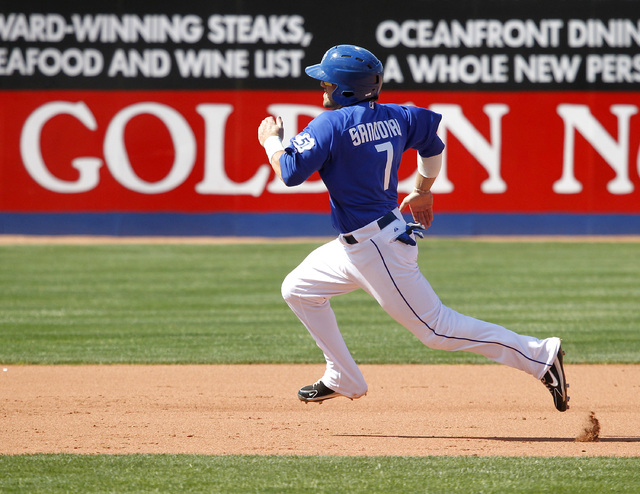 Las Vegas 51s shortstop Rylan Sandoval rounds second base on his way to scoring against the Tacoma Rainiers in the sixth inning of their game at Cashman Field on Sunday, May 11, 2014 in Las Vegas. (Justin Yurkanin/Las Vegas Review-Journal)

Buddy Carlyle and Zack Thornton each pitched one inning of scoreless relief, and Vic Black recorded his sixth save with a perfect ninth. El Paso didn’t score in the final six innings.

Puello led off the game with a single, stole second, went to third on a ground-out and scored on an error by shortstop Tyler Greene.

Carrillo led off the second with a single and scored on a two-out infield single by Josh Satin.

Carrillo drove in Zach Lutz in the third with a double and scored on the play on a throwing error by catcher Adam Moore. Allen then homered.

Puello scored Las Vegas’ final run, in the eighth, after getting hit by a pitch, stealing second and coming home on Allan Dykstra’s single.