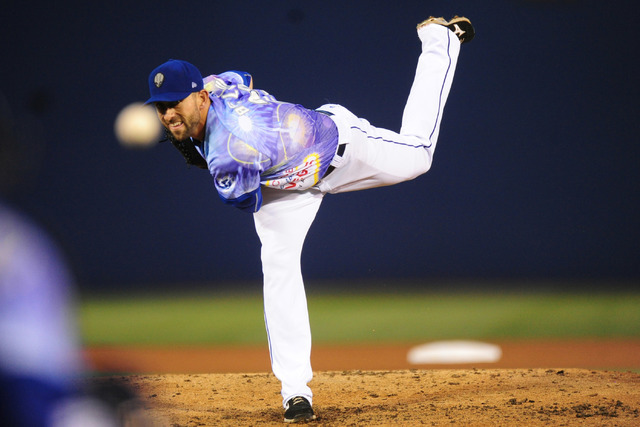 Most of the time, that’s the case, as Below had allowed more than three runs just twice this season.

But Friday, Below couldn’t do that. Hampered by a cut on a finger on his pitching hand, the left-hander was hit hard in the 51s’ 7-2 loss to the Salt Lake Bees at Smith’s Ballpark in Salt Lake City.

“I know that finger had an effect tonight,” Backman said.

Backman said because of that cut, which he thinks Below suffered in the early innings trying to throw a pitch, he was having a hard time with his cutter and curveball.

In the meantime, the Bees attacked early in counts, and Backman said they were probably the most aggressive team Las Vegas had seen. Salt Lake strung together four straight hits in the first inning for three runs, then added two in the second and two in the sixth off Below.

Left-handers entered the day hitting .338 against him. On Friday, he gave up nine more hits to lefties.

Behind him, the 51s (34-33) couldn’t do much, scoring one run on five hits against Bees starter Kyle Kendrick, who lasted seven innings.

“I thought he pitched good to both sides of the plate. He pitched inside effectively and got hitters out away and with soft stuff,” Backman said. “That’s why he’s been in the big leagues. He commanded the strike zone with all of his pitches.”

Roger Bernadina tagged Kendrick for a solo homer in the fifth, and Johnny Monell homered in the ninth for Las Vegas’ runs.

Bernadina, Monell and Brandon Nimmo each had two hits, and New York Mets catcher Travis d’Arnaud, who joined the team Friday as part of his rehab assignment, went 1-for-4 with a double.

But otherwise, the team went 0-for-8 with runners in scoring position and never managed to dent Salt Lake’s early lead.

“They were very aggressive, and (Below) was trying to get ahead with his fastball mainly and they were jumping all over it early,” Backman said. “And other than that, he gave up the five runs in the first two innings and we just never really had much of a chance to come back.”

D’Arnaud was in the 51s’ lineup Friday as the team’s designated hitter. The Mets catcher is with Las Vegas as he rehabs from a rotator cuff injury. D’Arnaud, who went on the disabled list in late April, is expected to rejoin the Mets on Tuesday.