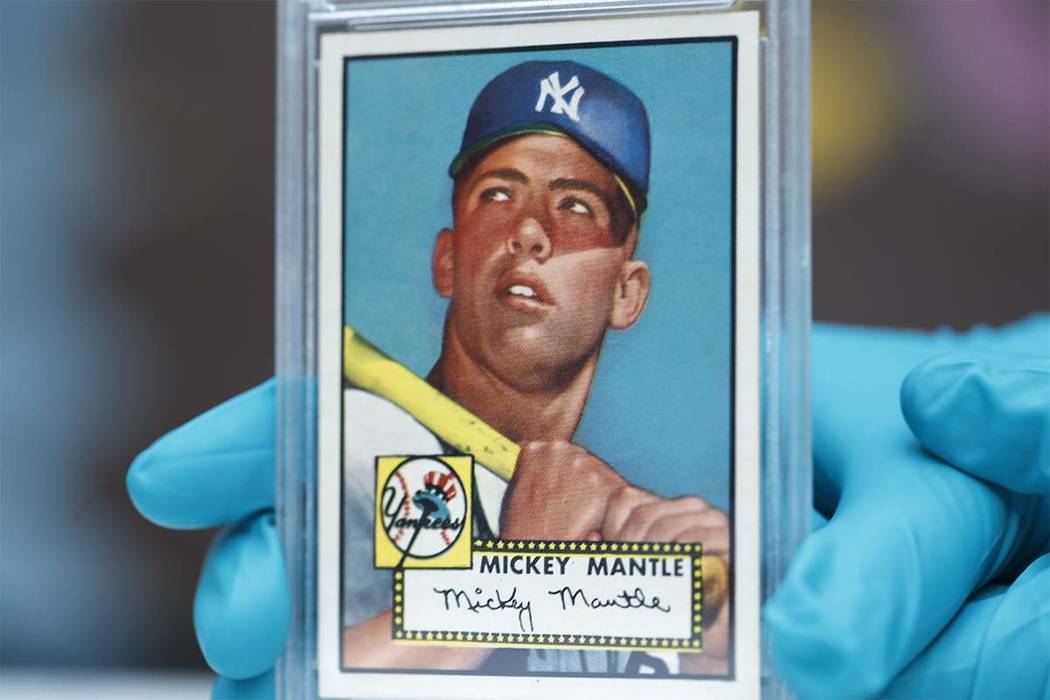 The "Holy Grail" of baseball cards, a 1952 Topps Mickey Mantle that is valued at more than $10 million, is put on display as part of baseball memorabilia exhibit at the Colorado History Museum Monday, July 16, 2018, in Denver. A New Jersey man has found five rare Mantle cards, although none worth $10 million. (David Zalubowski/AP)

Most people who collect sports cards when they are kids usually end up storing them in boxes for years and years. That’s where they stay until something prompts the desire to go through them.

For a 76-year-old man from New Jersey who asked to be identified only by his first name, John, it was seeing an ad in a newspaper earlier this year for a 1952 Mickey Mantle card being sold by Heritage Auctions with an estimated value of $3.5 million .

At first, he was sure the listed price was an error.

“I told my daughter, ‘this is going to be interesting. Tomorrow’s New York Times, they’re going to print they had a typo and they had an extra zero in it,’” John told The Associated Press in a phone interview. “I really thought they had made a terrible mistake.”

When he didn’t see a correction the following day, he began looking through the collection he jointly owns with his older brother, Ed. And when he saw the card sold by former NFL lineman Evan Mathis went for $2.88 million, that’s when John decided to call Heritage to have them evaluate his cards.

As it turns out, their collection includes five Mantle Topps cards from 1952, similar to the one Mathis sold. However, that card was graded a Mint 9 by PSA, one of the leading sports memorabilia authenticators. The best in the brothers’ collection is a PSA 8.5 that has been valued at $1 million by Heritage and is part of its Summer Platinum Night Sports Auction that runs through Aug. 19.

John recalled he and his brother began collecting cards in 1951 when they were growing up in West Hartford, Connecticut. John was 9 years old at the time, and Ed was 12, and they each had separate collections that got merged at some point years later when they were being stored.

“For reasons unknown, we didn’t save anything after that, from 1953,” John said. “I guess my brother sort of outgrew it, and as the big brother stopped saving cards the little brother apparently did as well.”

There was a big attic in their house and John said a lot of things were stored there over the years after they were no longer being used, including his Cub scout uniform and his Army uniforms. At some point the cards went up there, too.

That’s where they remained until his mother passed away in late 2006. Her house was sold and her belongings were divided between John and his brother, who lives in Massachusetts. The cards ended up in John’s basement.

“We always knew we had the cards, but they were just in the attic,” John said. “We were fortunate our mother stayed and lived in the house until she was almost 102. Most people would have moved at some point, and in the move things like baseball cards and old school books would get thrown away. Ours just stayed there for 50 years.”

At one point around 1980 by John’s estimate, he talked to a dealer and described what he had and without seeing the cards, the dealer offered him $8,000. However, it wasn’t a priority for him to do anything with them at the time.

Not until he saw the big price tag for Mathis’ card and reached out to Heritage.

“Part of the anxiety is you don’t know how (to sell the cards),” John said. “If you go to a dealer who is buying them, your best interest isn’t his primary one. With an auctioneer, the better you do, the better they do.”

The current auction has six cards from their collection, including the Mantle PSA 8.5, and their final two Mantle cards — a PSA 7 estimated at $100,000 and another PSA 5 estimated at $40,000 — will be part of an offering in the fall.

John credited his father, who was an avid collector of stamps, coins and postcards with pictures of bridges, for instilling the sense of preserving collections in him and his brother.

“We didn’t abuse them,” he said of the cards. “They were a collection. We watched how he did things and we did the same.”

Asked if he had any plans for his share of the money from the sale of the cards, John said he avoids thinking about that.

“It seems tempting fate to be planning too far in advance of what are you going to do, a counting-your-chickens syndrome,” he said.