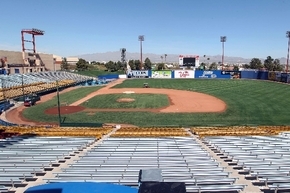 Summerlin Las Vegas Baseball Club LLC, a joint venture of the Howard Hughes Corp. and Play Ball Owners Group, which included investors Steve Mack, Bart Wear and Chris Kaempfer, announced Monday it has closed on the purchase of the 51s from the Stevens Baseball Group.

The price was $20 million for the Triple-A baseball team, which is affiliated with the New York Mets. The Pacific Coast League team has been in Las Vegas for 30 years. The $20 million sale price is what Triple A teams typically sell for these days.

“We’re excited to announce it. We feel very strongly about baseball in Las Vegas,” Mack, the team’s managing partner, told the Review-Journal on Monday.

Job one for the new owners: “We want to learn as much as possible,” Mack said. Mack, of Summerlin, grew up in Reno and is the former owner of SuperPawn Inc., a chain of 50 shops sold to Cash America in 2004. He has a new e-commerce software company in Summerlin.

In a statement, Howard Hughes Corp. Chief Executive David Weinreb said, “We see the opportunity of owning the 51s as a great way to extend our commitment to the entire Las Vegas Valley. We will work to ensure that the baseball experience in Las Vegas is among the best and look forward to an exciting new era for the team, their fans and followers.”

“It sets the stage for big things going forward,” said Logan, 51s executive vice president, directly referring to plans for a new ballpark for the team.

The biggest new challenge for the new owners is to win public support for their proposal to move the 51s from 30-year-old Cashman Field near downtown Las Vegas to a new $65 million ballpark next to Red Rock Resort in Summerlin near Charleston Boulevard and the Las Vegas Beltway. The owners envision a ballpark called The Ballpark at Summerlin Centre with 8,000-9,000 seats on 16-20 acres to be donated by Howard Hughes Corp., which values the land donation at $40 million.

The new owners want a three-way partnership between the city of Las Vegas, Clark County and the Las Vegas Convention and Visitors Authority to float bonds to pay for the $65 million ballyard, which would be surrounded by a proposed mini-urban village of retail stores and restaurants. The proposed Summerlin ballpark site is in Clark County, a mere 500 yards from the city line.

— “The vision is that want to be deeper in the community.”

— “It’s getting everyone on the same page.”

— “The most important thing is to get municipalities on board.”

Dallas-based Howard Hughes, the largest community development company in the Las Vegas Valley, is the landowner and master planner of 22,500-acre Summerlin, which began more than 25 years ago.

The new owners bought the club from the Stevens entity, which includes Derek Stevens, owner of The D Las Vegas in downtown Las Vegas. Stevens declined to comment Monday.

Mack said previous out-of-town owners have run the 51s “as an outside business,” but he’s excited about the team’s fresh start because of the local control.

“We have parties invested in the community,” Mack said.

Mack has argued that it makes better financial sense to build a new ballpark than have the LVCVA, which owns the 51-acre Cashman complex, spend $5.5 million on annual maintenance and operations. Officials for the team and the Pacific Coast League said Cashman Field is antiquated, lacking adequate batting practice facilities and training rooms.

While the new owners want public dollars to underwrite a new ballpark, opponents argue the public should not pay for the team’s new stadium.

And some neighbors already oppose the Summerlin ballpark project because of the ballyard’s traffic and parking impact. Francisco Virella, a teacher who lives in the Willow Springs neighborhood near the proposed ballyard, said residents fear parking problems, traffic and possible drunken fans on their streets would hurt home values.

“That said we want to be good neighbors and are willing to sit down to meet with the new ownership group to see if we can together come up with solutions that will eradicate any negative impact to the community of Willow Springs,” Virella said.

“The proximity of our community between the 215 and the stadium will make Willow Springs perhaps one of the most convenient places for patrons to park of they wish to avoid a parking fee and/or traffic from leaving the game,” he said.

Mack said he’s also a Summerlin resident, and he will meet with neighbors to discuss parking and traffic issues.

“There won’t be a shortage of parking,” Mack said. “We’ll listen to everyone.”

The new owners already have some new ideas for the team. They might re-brand the team with a new name and logo and build a rotunda to encircle the proposed Summerlin ballpark for small children and families.