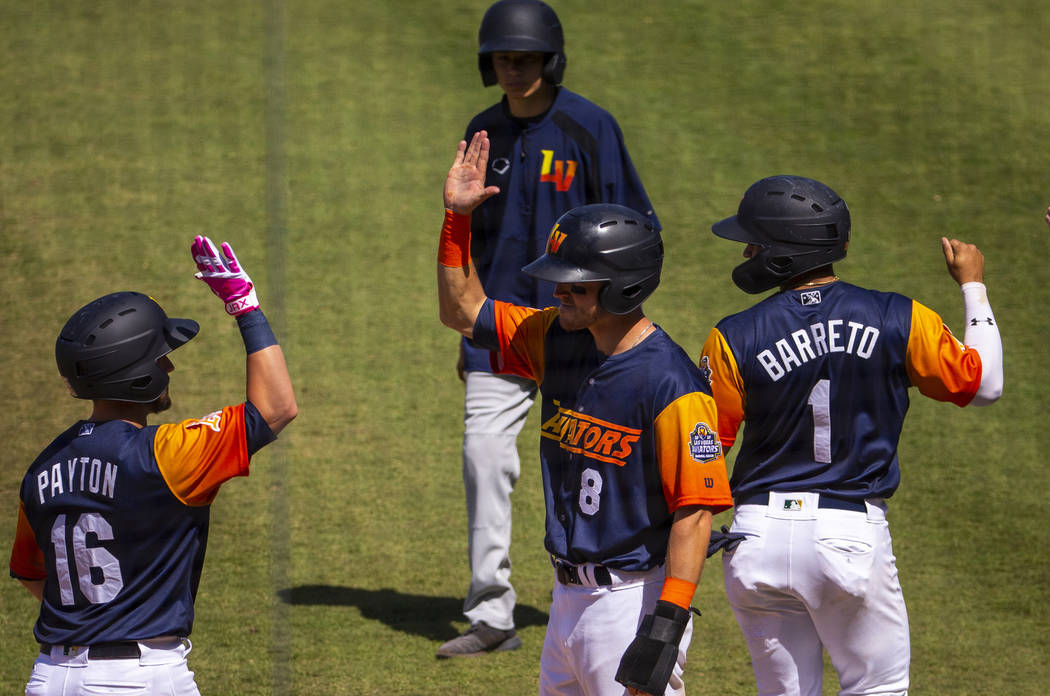 Aviators players celebrate a grand slam late in the game versus the Tacoma Rainiers at the Las Vegas Ballpark on Sunday, May 12, 2019 in Las Vegas. (L.E. Baskow/Las Vegas Review-Journal) @Left_Eye_Images

In the words of Aviators outfielder Mark Payton, “It’s hard to get 27 outs. No matter the score, no matter the inning.”

This season the come-from-behind victory has been the team’s bread and butter, at least in the early going. Seventeen of their 26 wins have been comeback victories. Entering Friday’s game vs. the Albuquerque Isotopes, they have scored 48 runs in the eighth inning or later.

“Putting up so many runs in the eighth inning is a testament to that and what these guys think they can do and actually go out and accomplish it.”

The trend started on opening day, when the Aviators had to overcome a one-run deficit on two separate occasions before winning 9-8 at El Paso.

From there, the floodgates opened.

At one point, the Aviators reeled off five consecutive come-from-behind wins and finished April with 12 comeback victories.

Those 17 wins after trailing at one point have come against six teams. And in all six games against the Sacramento River Cats have been comeback wins.

“That was an interesting series because those three games were late, come-from-behind wins and Sacramento has a lot of big arms in that bullpen,” Riordan said. “It was one of those series where everything clicked for us, we had really good at-bats, competitive at-bats — everyone just kind of moved the needle.”

It doesn’t seem to matter who the team plays, or even where the team plays. Of the 17 come-from-behind wins, 10 were in the new Las Vegas Ballpark. However, those even late road wins present a different set of challenges.

“I think everyone is more comfortable playing at home in front of your own fans, especially a beautiful setting like this where the fans support to the team,” Riordan said. “So you go on the road and a little bit of a hostile environment — you always have the home team hitting last so they have that last opportunity to seal the deal.”

Despite the staggering numbers, Las Vegas has one walkoff win on the season and that came earlier this month.

“It took us 34 games to get that first walkoff win in front of our own fans and it was obviously the first one here in Las Vegas Ballpark,” Riordan said. “Any walkoff win is special, but when it’s the first in a new stadium it meant a little bit more.”

Added Payton: “Anytime you get to go mob somebody on the field is a good day and anytime you win it’s a good day.”

The lone walkoff hit came from 23-year-old shortstop Jorge Mateo, who is first on the team in hits ( 62 through Wednesday) and RBIs (39).

“He’s off to a great start this year and he’s a great player,” Payton said. “He’s probably the best athlete I’ve ever been around on a baseball field.

“He’s a tremendous baseball player so he’s going to continue having success here and have success when he gets the chance to do it in the big leagues as well.”

Regardless of where the team plays or who is getting the key hit, one thing stands out for Riordan.

“Just having that confidence that we can come back at any time (is crucial),” he said.