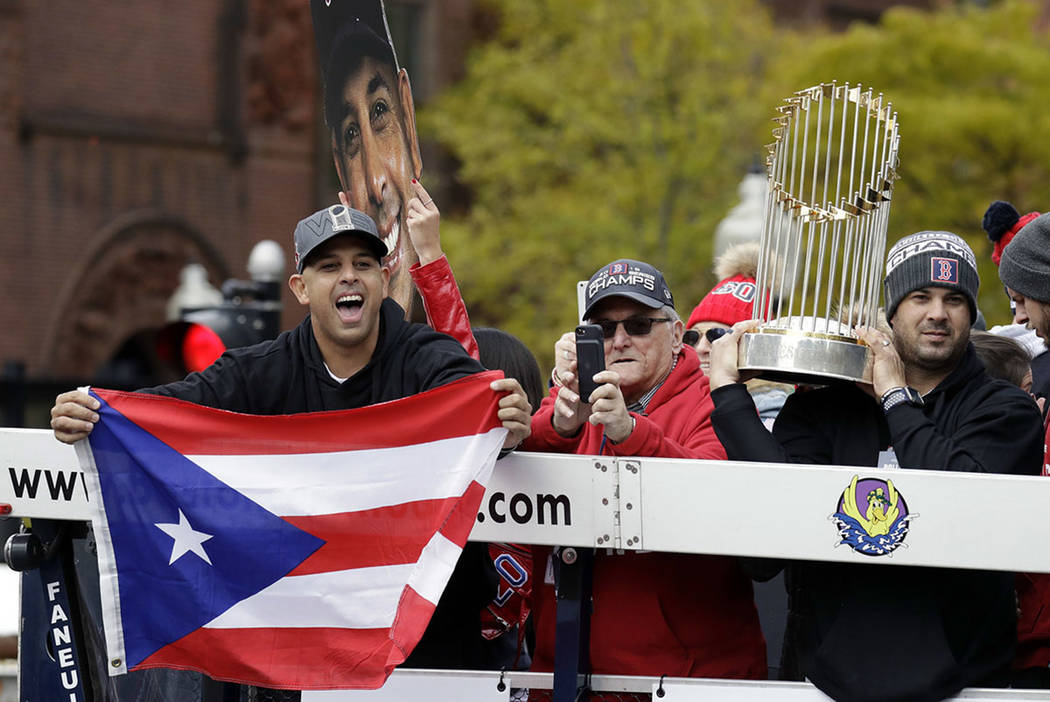 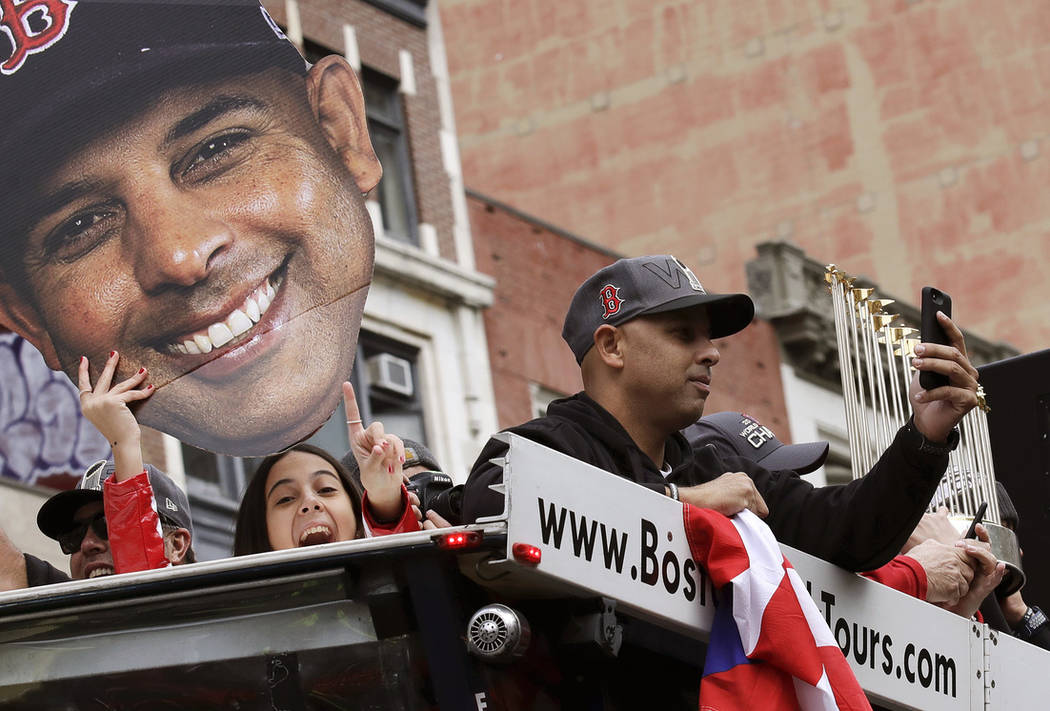 Boston Red Sox manager Alex Cora takes a photo as his daughter Camila, left, holds a cutout photo of him during a parade to celebrate the team's World Series championship over the Los Angeles Dodgers, Wednesday, Oct. 31, 2018, in Boston. (AP Photo/Charles Krupa) 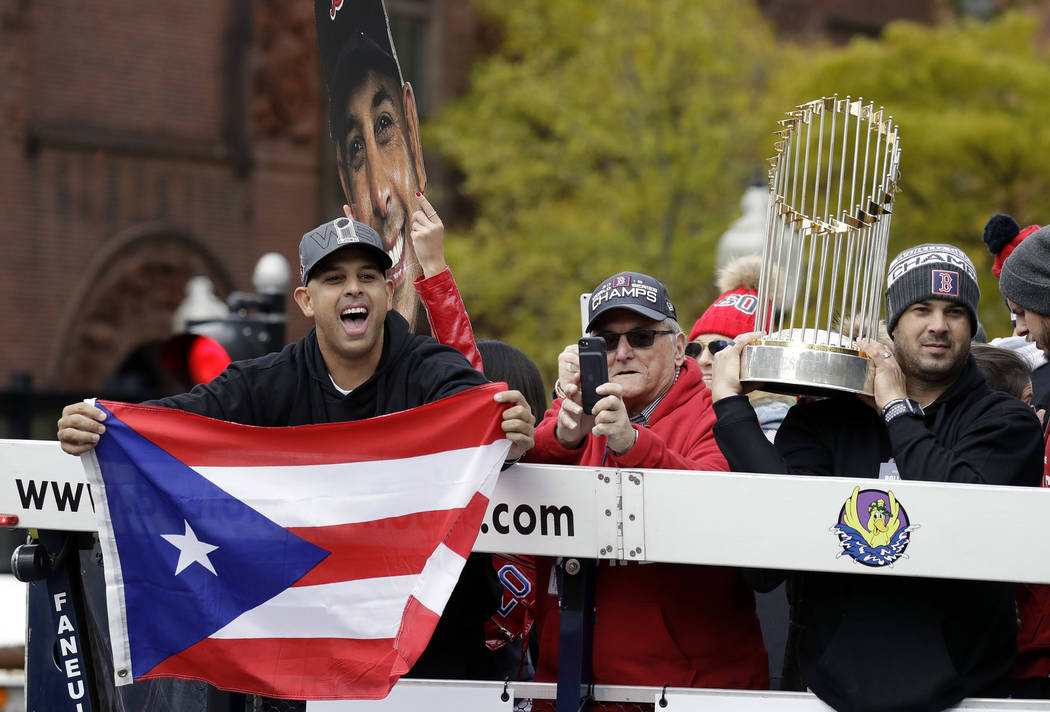 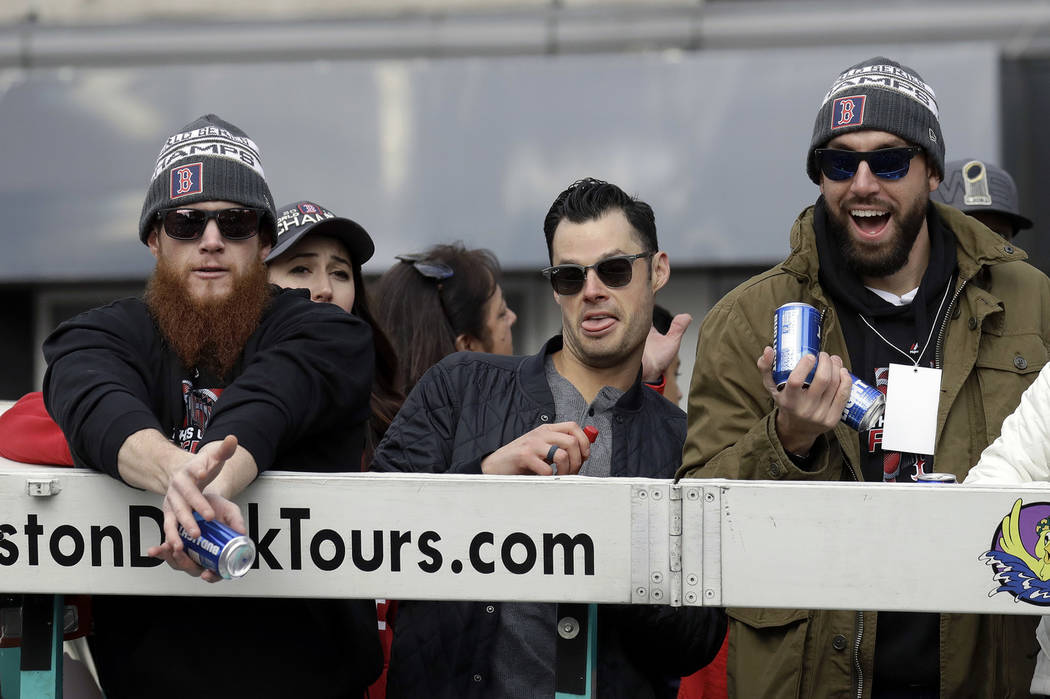 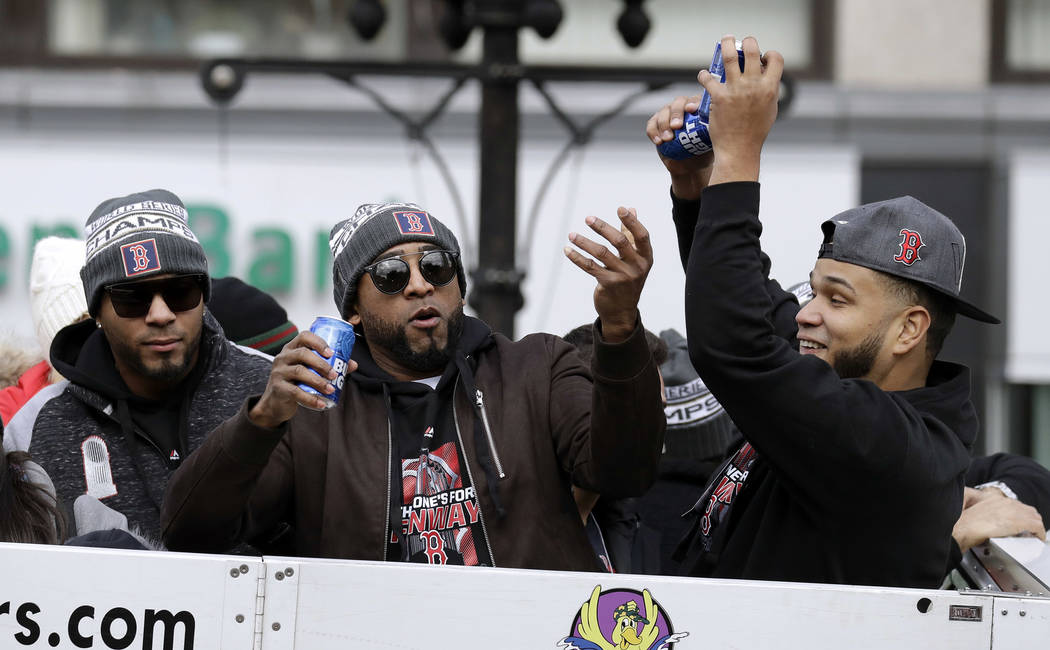 BOSTON — Confetti cannons boomed and huge crowds of fans cheered wildly on Wednesday as the Boston Red Sox rumbled through downtown aboard duck boats to mark the team’s fourth World Series championship in the past 15 years.

One of the team’s championship trophies and team manager Alex Cora were hit by flying cans of beer that Boston fans have made a practice of offering their sports heroes during recent victory parades. Neither was seriously injured and it didn’t take any varnish off the shining celebration.

The rolling rally set off from venerable Fenway Park and wound its way through major city streets lined by fans numbering in the hundreds of thousands, some who arrived before dawn.

Bits of red, white and blue paper rained down as team officials, players, and their families waved from the amphibious, World War II-era vehicles. Some autographed balls and drank beers tossed to them from the jubilant throng.

Many in the sea of Red Sox jerseys and ball caps took advantage of the fact that the parade coincided with Halloween.

“It’s been nothing but love. We’re out here having a good time. We’re turnt up,” said Jarrick Fidalgo, a New Bedford, Massachusetts, native with his face painted in the diabolical red, white and black of the Joker from “Batman.”

But it wasn’t all carefree fun. Team manager Alex Cora, one of the team’s four World Series trophies and a bystander were among those hit by errant beer cans. Cora and the trophy were barely scathed, but the bystander was urged to get treatment for a gash on her nose, The Boston Globe reported.

Patrick Connolly, a 19-year-old from Sandwich, Massachusetts, was charged with assault and disorderly conduct for allegedly hitting Cora with an unopened beer.

Connolly told the arresting officers, according to the Globe: “I love Cora. I didn’t mean to hit him.”

Police Commissioner William Gross said there were five other parade-related arrests, including a 17-year-old charged with illegal firearm and drug possession.

Security was tight along the route, which took the team past the site of the deadly 2013 Boston Marathon bombings.

Public drinking, in theory, was banned, but many fans still liberally swigged from small vials of liquor and cans of beer.

Throughout the day, spontaneous anti-Yankees chants rang out, a nod to the long-running rivalry between the American League squads.

Countless Boston-area youths skipped class to take in the parade.

“I heard there were six people in my history class today. Everyone is here,” said Max Colognesi, a 16-year-old from nearby Chestnut Hill who joined friends near the ballpark. “I have a lot of homework when I get back, but it’s worth it.”

During a pre-parade ceremony at Fenway, Cora thanked fans for supporting the team as it won a team-record 108 games before beating the New York Yankees, Houston Astros and Los Angeles Dodgers in the playoffs.

“I’ve been saying since Day One, this is crazy, this is madness,” he said.

Boston fans learned even more good news Wednesday when pitcher David Price announced before the start of the parade that he planned to stay in Boston, declining a contract option that would have enabled him to become a free agent.

On Tuesday, the team announced they were exercising their $15 million option for next season to retain another star pitcher, Chris Sale.

Though some fans were enjoying their first championship parade, many others, like 23-year-old Derek Safford, were veterans.

The North Attleborough, Massachusetts, resident and his family have attended every parade since 2004, including celebrations of titles for the New England Patriots, Boston Celtics and Boston Bruins.

“I know people had doubts at the start of the season with Cora being a first-time manager, but he really made a family-like atmosphere and brought this team together,” Safford said from his prime vantage point on Boylston.

Bob Gardner traveled up from Newtown, Connecticut, with his wife and their 17-year-old grandson, Andrew. They took in the spectacle from near Fenway.

“It’s an incredible thing because the team itself reflects so many good things — redemption, pride, teamwork — especially at this point in our country’s history,” he said.