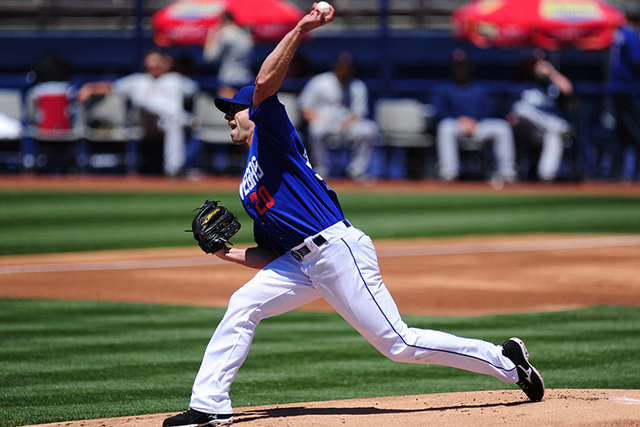 When the 51s arrive back at Cashman Field for work on Monday, they’ll do so in first place after concluding a successful 6-2 road trip.

They did so without a great start by Duane Below, but manager Wally Backman has been fond of saying that Below always keeps them in games and gives them a chance to win and Sunday was no different.

“Overall I thought we played pretty darn well today,” Backman said. “(Below) struggled today but he fought his way through it and got some big outs when he needed them.”

Below gave up three runs in 5 1/3 innings, though he gave up 11 hits and left in the sixth with the bases loaded.

Reliever Zack Thornton came on and struck out Nate Orf before getting Yadiel Rivera to ground out in the pivotal inning.

The 51s had a three-run lead at that point after center fielder Brandon Nimmo had driven in a pair of runs in the top of the sixth for his second two-run double of the game.

The 51s never trailed in the game, scoring their first two runs in the first inning on consecutive hits from T.J. Rivera, Johnny Monell and Travis Taijeron before Nimmo drive in his four in the fifth and sixth.

Colorado Springs got it to a two-run game in the ninth after scoring a run off Erik Goeddel in his second inning of work and brought the tying run to the plate, but Backman played matchups and it paid off as Josh Edgin and Chasen Bradford both got swinging strikeouts to retire the last two batters of the game respectively.

On the most recent road trip — which was eight games, nine days — Las Vegas won both series.

The only two games they lost came when they faced the top pitcher in the Pacific Coast League, Dodgers uber prospect Julio Urias, in Oklahoma City and Friday when they used Stolmy Pimentel as a spot starter.

Backman said he thought they could have been 7-1 on the road trip, as they had chances off of Urias that they couldn’t capitalize on. But he’s not about to complain about a 6-2 road trip, saying his team has been playing “good, consistent baseball.”

“They’ve played together. They’ve loosened up,” Backman said. “The chemistry in the clubhouse is outstanding and they’re going out there now knowing what type of players they have around each other and they expect to win when they go out there now.”