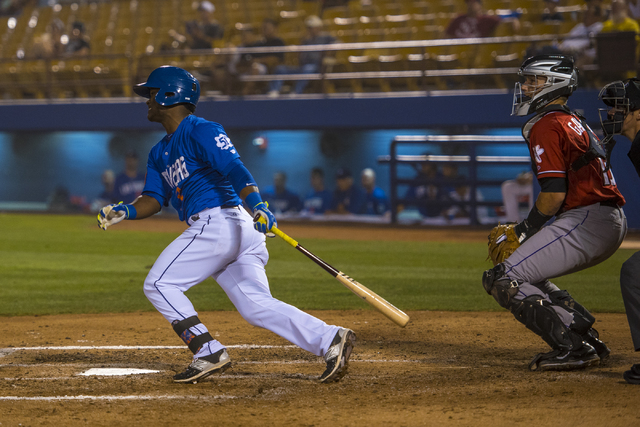 Dilson Herrera, 2, of the Las Vegas 51s, looks down field after hitting a home run against the Albuquerque Isotopes at Cashman Field in Las Vegas on Sunday, July 5, 2015. (Joshua Dahl/Las Vegas Review-Journal)

Dilson Herrera and Cory Vaughn each had two doubles and two RBIs to pace a balanced offense as the 51s outslugged the Salt Lake Bees 10-5 in a Pacific Coast League game Wednesday at Cashman Field.

Herrera finished 3-for-5 with a stolen base, and Vaughn, Travis Taijeron and Dan Rohlfing each had two of Las Vegas’ 13 hits.

Taijeron had one of the 51s’ eight doubles and clubbed his 15th home run, tying Alex Castellanos for the team lead.

Grant Green’s two-run single in the fourth tied it at 4 before Wilfredo Tovar’s RBI double in the bottom half keyed a two-run surge that put the 51s ahead to stay.

Alfredo Marte, who went 2-for-4 with an RBI for Salt Lake (34-53), made two errors in right field that allowed three runs to score.

Alex Yarbrough and Gary Brown each hit a solo home run for the Bees, who notched seven of their 10 hits off Las Vegas starter Rainy Lara.