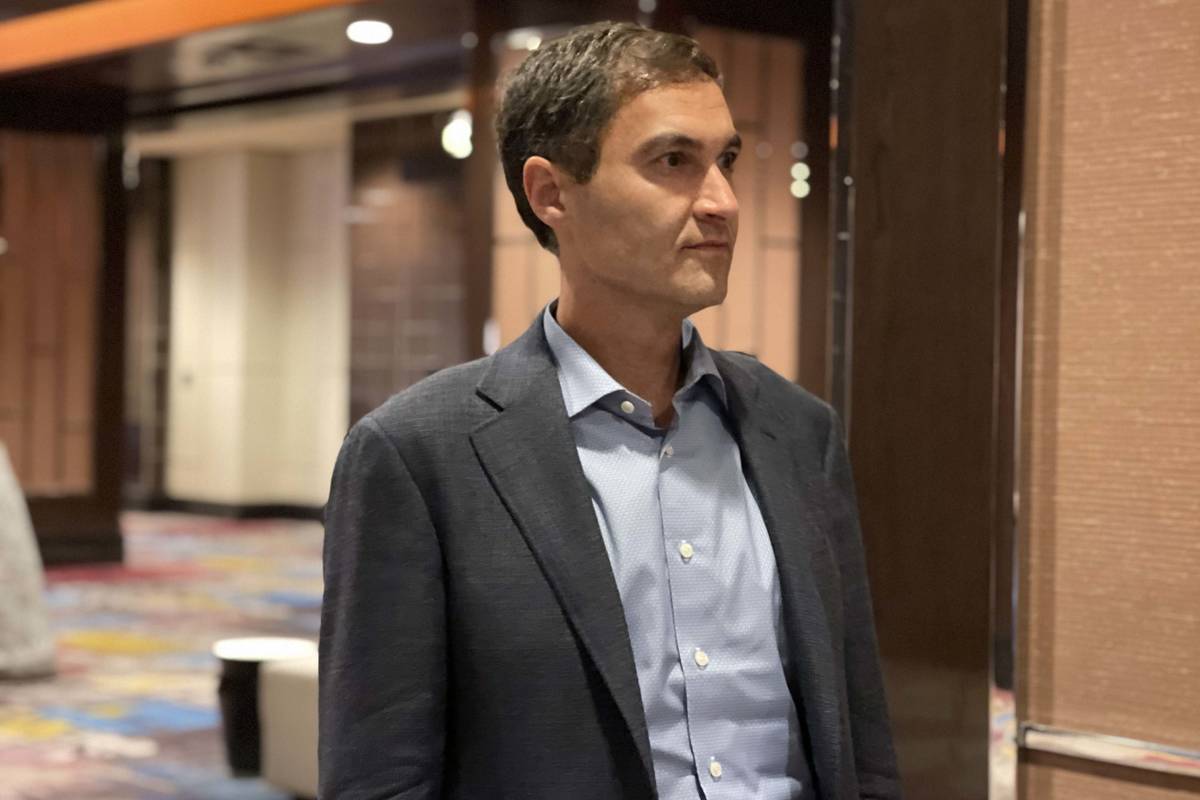 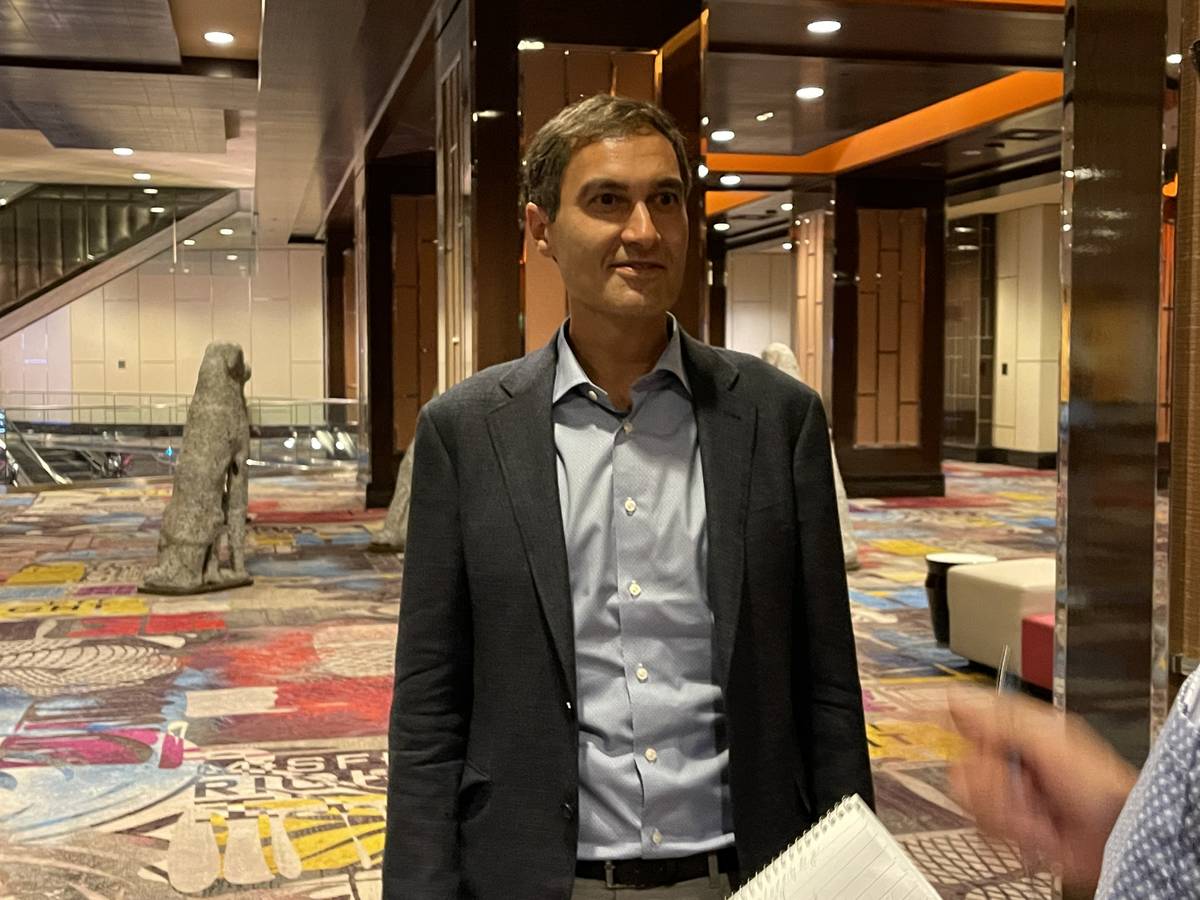 After spending the week in Las Vegas chatting with elected officials and sports and casino executives, the Oakland Athletics’ brass are bullish on the possibilities the city could bring to Major League Baseball.

“It was a great first trip,” Kaval said in an exclusive interview with the Review-Journal. “Everyone was really welcoming to us. We don’t have all the answers. We’re approaching this and are trying to listen to understand what could work here in Las Vegas for a major league team.”

Kaval and the A’s group, which included owner John Fisher, also met with executives from Caesars Entertainment, Wynn Resorts and MGM Resorts. Kaval met with Golden Knights owner Bill Foley while taking in a Knights playoff game, which drew a lot of attention when he posted an excited tweet about the crowd at T-Mobile Arena.

Kaval said his fact-finding mission this week had several dimensions. The first was market feasibility.

“Can 81 home games work here in Las Vegas?” Kaval asked. “There’s been the success of the Golden Knights, the Raiders selling all of their tickets… so really understanding that market feasibility, that’s really been a question of give and take in every conversation we had with everyone.”

Second was where a stadium in Southern Nevada would make the most sense.

Kaval and the local groups toured potential stadium sites near the Las Vegas Strip, in Summerlin and in Henderson, including the area near the M Resort on Las Vegas Boulevard and St. Rose Parkway. They also looked at Cashman Field near downtown Las Vegas.

“All these different places and visiting those sites and walking around and seeing with your own eyes and hearing from real estate people and understanding what’s possible — that was a big focus that we spent a lot of time on,” he said.

Kaval said A’s officials don’t have a preferred site for a ballpark, which could be influenced by research they need to conduct on what the predicted resident turnout would be versus visitor attendance.

After attending the Knights game and an Aviators game at Las Vegas Ballpark, chatting up several fans in the process, Kaval said he discovered the local fan base was deeper than he expected.

“In meeting with Bill Foley and the Aviators, just seeing the success of professional sports in Southern Nevada with locals has been very impressive,” Kaval said. “What type of mix our organization would have here in terms of tourists versus locals, I don’t think we have an answer. But I think that drives a little bit about what location makes the most sense. But certainly the resort corridor is one we’re looking seriously at.”

If Goodman has her way, the team would relocate to the Cashman site, one she and her husband, Oscar Goodman, have pitched for years.

“The ball obviously is in their court — or their stadium — and they’re going to assess everything,” Goodman said in a brief interview.

The mayor’s pitch to the A’s mirrored the one to the Raiders about five years ago, Goodman said. In 2016, she plugged the city-owned Cashman Center as an ideal location for a stadium. The site is within a federal opportunity zone, which is designed to spur private investment through tax incentives.

The two sides did not discuss financial specifics of a new stadium, she said, but the A’s “certainly were very enthusiastic” about opportunities in Southern Nevada.

Henderson officials also met with the team Thursday morning. A source with knowledge of the talks said city officials did not offer up potential sites that could host a ballpark.

The city did discuss a prior stadium concept it developed in a past attempt to relocate the Arizona Diamondbacks to west Henderson, the source said.

The A’s are interested in a ballpark surrounded by mixed-use development, similar to what has been proposed in Oakland and what already has been built in Cobb County, Georgia, for the Atlanta Braves, the source said.

The third focus for the A’s group was gaining an understanding of how a public-private partnership might work.

“The Raiders put one together that included a bill at the state level,” Kaval said. “Obviously we’re in our very early stages of understanding what’s possible. But that’s an important thing to understand.”

The Raiders received $750 million in public money toward the $2 billion cost for Allegiant Stadium. That money is being generated by a 0.88 percent tax on hotel rooms in Clark County.

The last focus was determining the team of people that would be needed to get a stadium built in Southern Nevada.

“Who can we add to the team? Who are the people we need to talk to?” Kaval said. “One thing we discovered on this first trip is that there’s still a lot of people to talk to.”

“He’s really excited to welcome me up in Carson City to spend some time together, too,” Kaval said. “I think that was really encouraging.”

The next step in the process involves Kaval traveling to New York next week to provide a report on the trip to MLB Commissioner Rob Manfred.

Kaval said he’d use the game day experience at the Knights game as a blueprint for what A’s games in Las Vegas would look like.

“Our business is in entertainment and I think the more we do to have a top quality experience, both in terms of the venue we build, wherever it’s built, and then also the experience in programming, it is critically important,” Kaval said. “It feels like that’s an expectation and I think it’s something that our league needs.

“I think MLB needs more of that. More promotion. More excitement. A show.”

With a week in the area Kaval and the A’s left Thursday night with good vibes about what lies ahead and said return trips are anticipated.

“One thing about the Southern Nevada area is that there are a lot of possibilities,” Kaval said. “So we just want to approach that thoughtfully and make the necessary research, talk to the relevant parties and understand what that all means.”