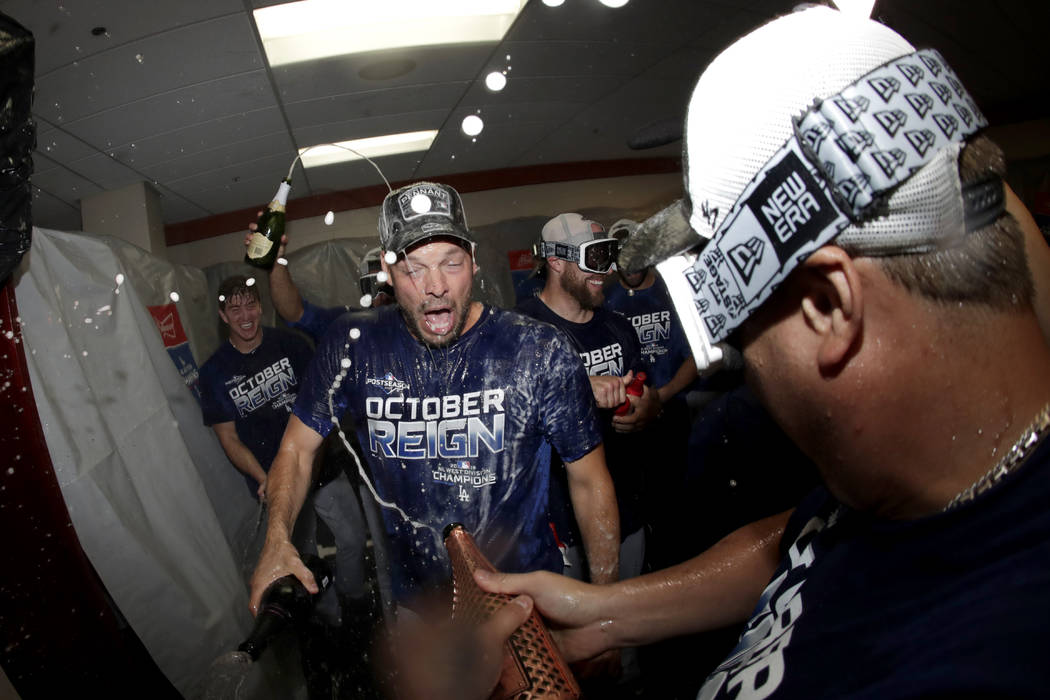 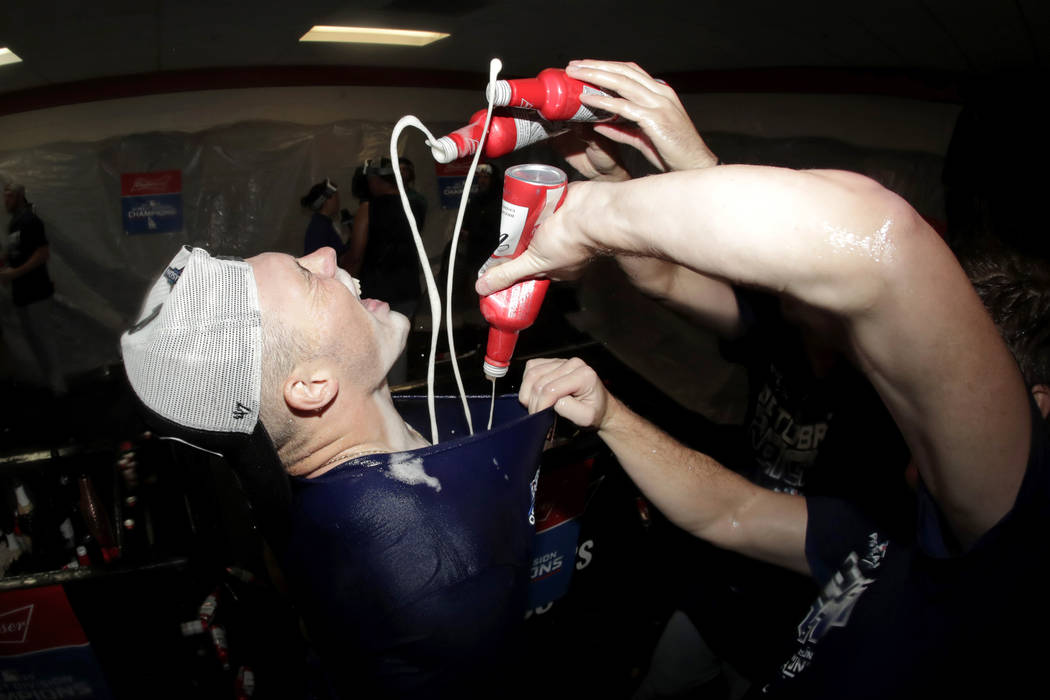 Los Angeles Dodgers second baseman Gavin Lux is doused with beer by teammates during a locker room celebration after the Dodgers defeated the Baltimore Orioles 7-3 during a baseball game Tuesday, Sept. 10, 2019, in Baltimore. The Dodgers clinched the NL West title. (AP Photo/Julio Cortez) 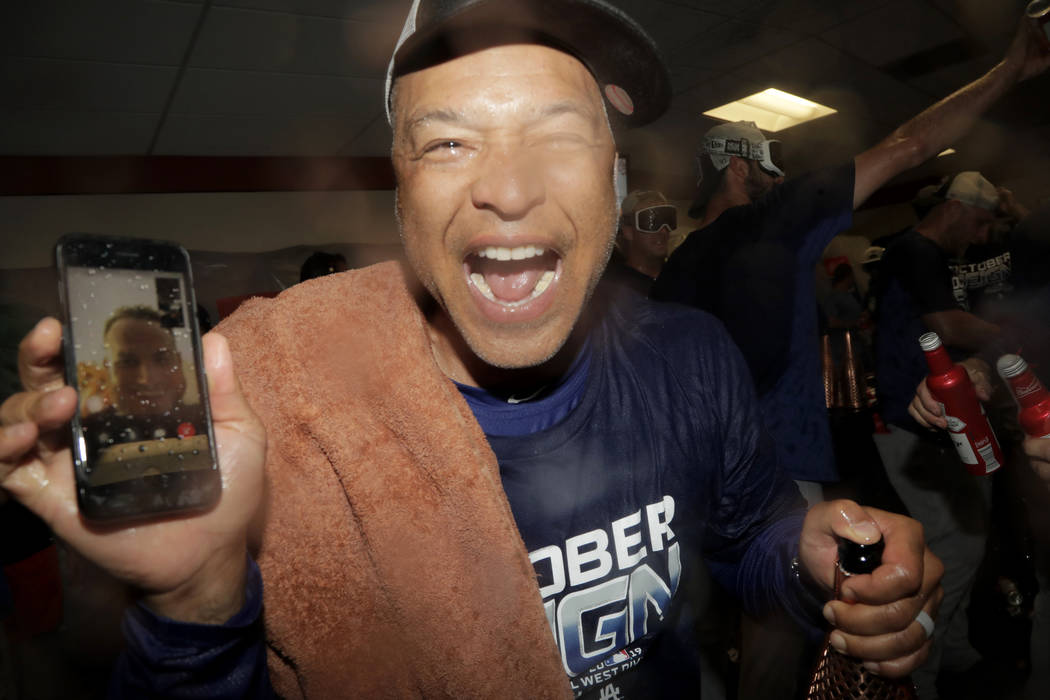 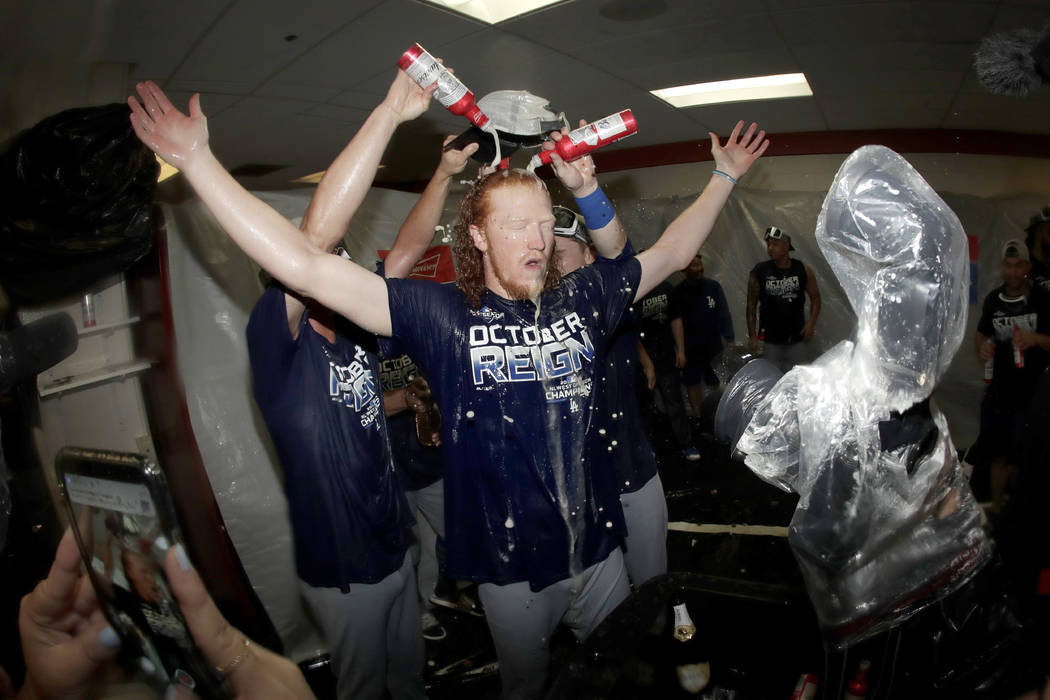 Los Angeles Dodgers pitcher Dustin May, center, is doused during a lockerroom celebration after the Dodgers defeated the Baltimore Orioles 7-3 in a baseball game Tuesday, Sept. 10, 2019, in Baltimore. The Dodgers clinched the NL West title. (AP Photo/Julio Cortez) 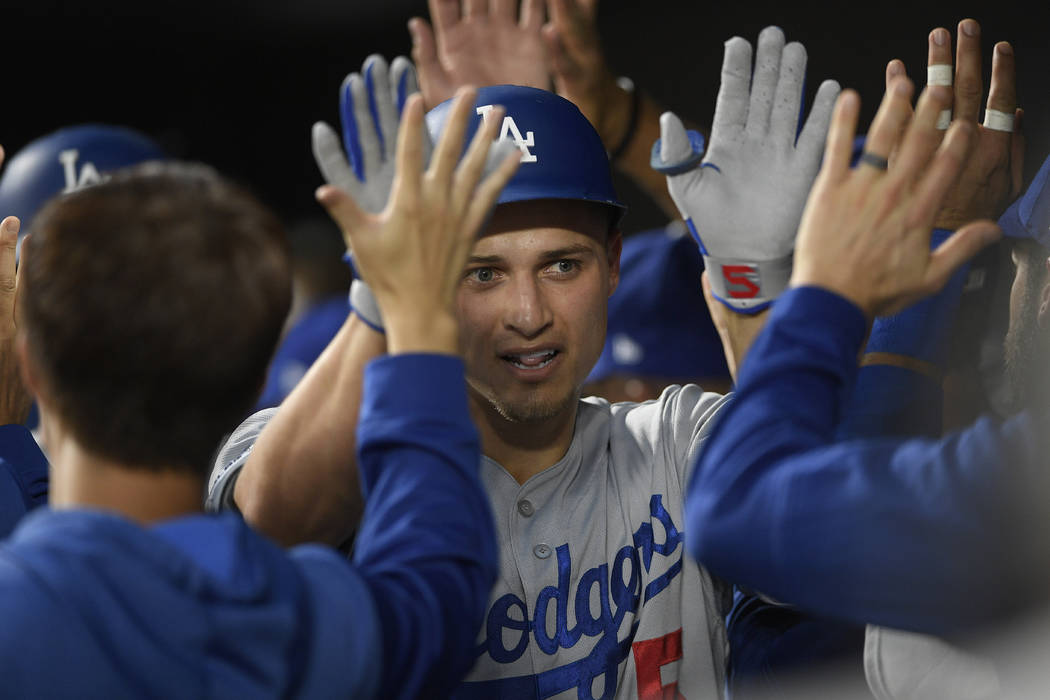 Los Angeles Dodgers' Corey Seager is congratulated in the dugout for his three-run home run during the first inning of the team's baseball game against the Baltimore Orioles, Tuesday, Sept. 10, 2019, in Baltimore. (AP Photo/Nick Wass)

BALTIMORE — The Los Angeles Dodgers sprayed each other with bubbly, emptied dozens of bottles of beer while drinking very little of it and essentially carried on in a fashion appropriate for a team celebrating its seventh consecutive NL West tile.

Certainly, the Dodgers were elated about becoming the first team in the majors to clinch a playoff spot this season. Yet, because the occasion was virtually a given since May and not nearly as emotional as their playoff win over Colorado in Game 163 last year, the party was, as manager Dave Roberts put it, “subdued.”

“It was one of those things that we expected it,” Roberts said Tuesday night after a clinching 7-3 win over the Orioles. “It’s obviously early in September, but it doesn’t take away what we as an organization accomplished.”

The Dodgers, with a power-packed lineup and imposing rotation, gained sole possession of first place on April 17 and never looked back. Their final pursuer was the Arizona Diamondbacks, who dropped 18½ games out of first place with a loss to the Mets.

After the last out, the players gathered around the mound for a wardrobe change for the soaking to follow the second-earliest NL West clinching behind the 1975 Cincinnati Reds, who accomplished the feat on Sept. 7.

Sure, the celebration was inevitable. So what?

“When we do get moments like this, I think we do a good job of appreciating what we have accomplished and it’s special. It really is,” Roberts said. ‘To win one division, but to win seven in a row, the consistency of the organization, what we’ve done, a lot of credit goes to a lot of people. And now it’s the idea of refocusing and everything we do going forward is to win 11 games in October.”

Los Angeles, coming off consecutive World Series losses to Houston and Boston and seeking its first title since 1988, will likely begin the postseason at Dodger Stadium on Oct. 3 against the NL wild-card team.

“It’s something you don’t take for granted. You enjoy them all,” said third baseman Justin Turner, who received a beer drenching in the middle of his interview. “Obviously not as dramatic as last year, going to a Game 163, but it doesn’t take anything away from what we’ve accomplished. We’ve showed up trying to give ourselves another chance to make it to the World Series, and this is the first step.”

On the outskirt of the mayhem-filled clubhouse, former Dodgers manager Tommy LaSorda watched with a beer in his hand. Roberts came by to shake the hand of the 91-year-old face of the franchise, who ultimately was greeted by almost every beer-soaked player in striking distance.

Though an Arizona loss to the Mets would have clinched it for the Dodgers, Los Angeles emphatically took care of business on its own. Corey Seager homered with two on to cap a four-run first inning against Ty Blach (1-3) and added a two-run drive in the third for a 6-0 lead.

Gavin Lux hit his first career homer in the fifth to increase the Dodgers’ NL record for long balls in a season to 258.

Tagged by Colorado for six runs in five innings during his previous start, Walker Buehler (13-3) limited last-place Baltimore to four hits over seven shutout innings for the team with the lowest ERA in the league.

Buehler struck out 11, reaching double figures for the sixth time. He has 201 for the season.

“That was just a clinic from first inning through the seventh for him,” Orioles manager Brandon Hyde said. “Four pitches for strikes, locating everything. I haven’t seen the video, but it didn’t seem like he missed a spot the whole night.”

The Dodgers can now coast to the finish, although they have a shot at breaking the franchise record for largest final first-place margin, 13½ games in 1955. LA is also in the running against Houston and the Yankees for best record in the majors and home-field advantage throughout October.