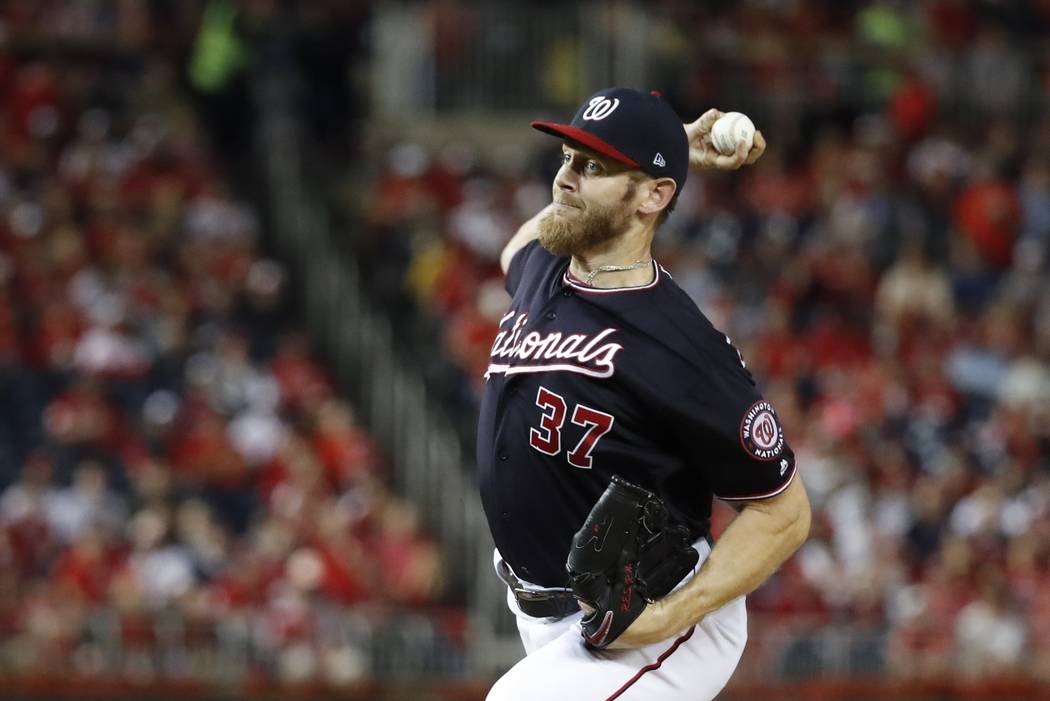 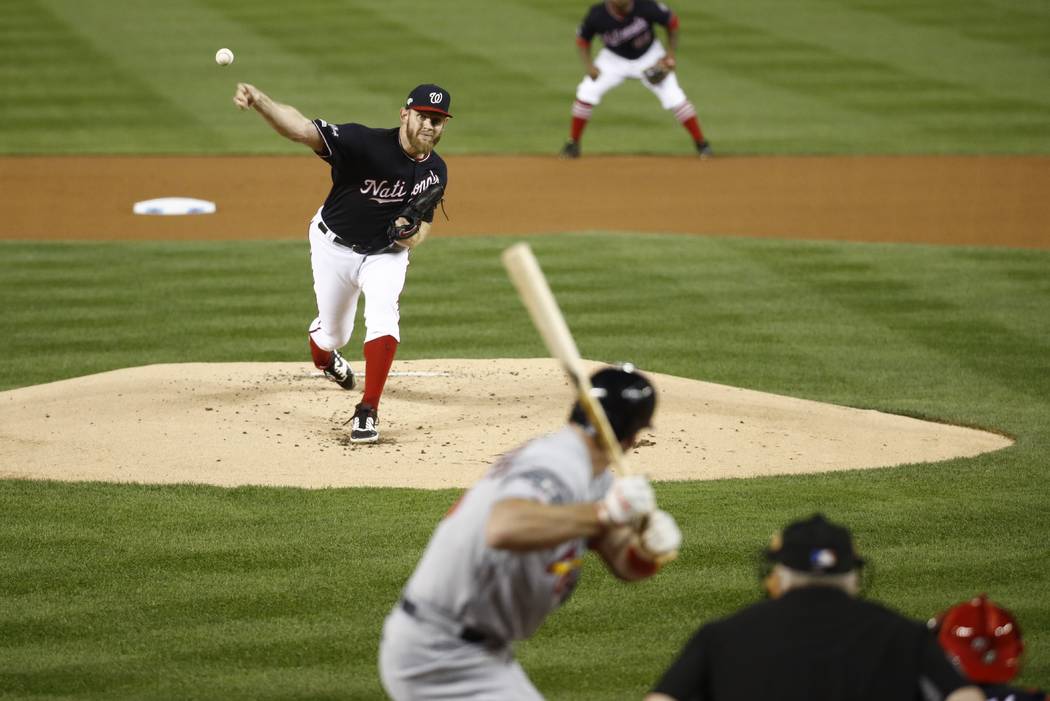 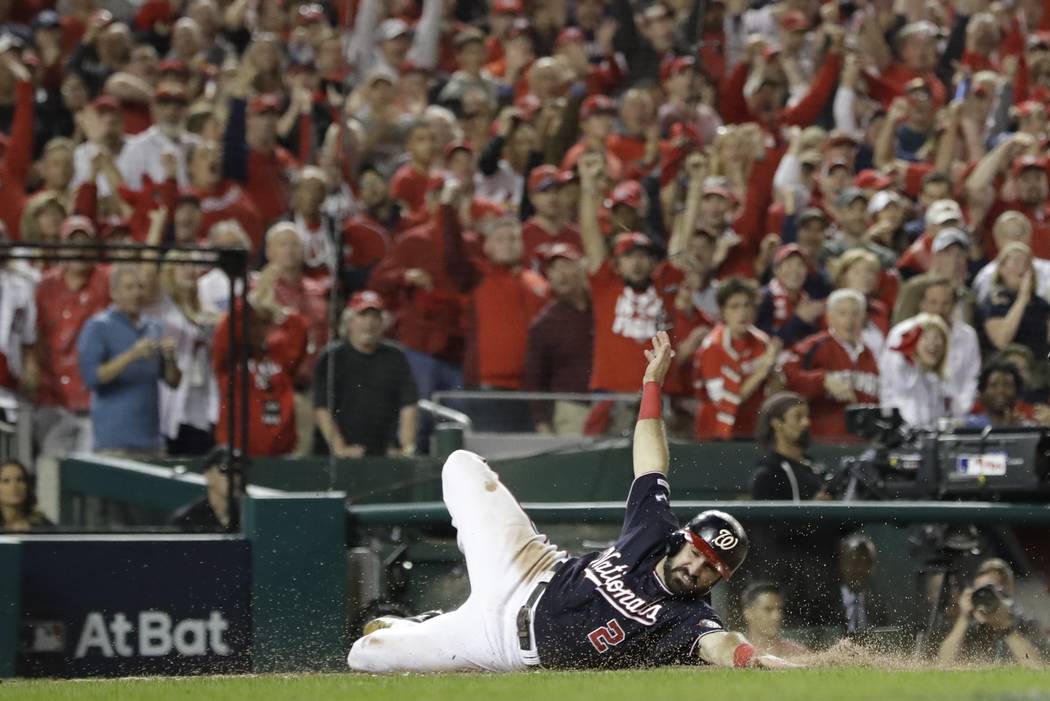 Washington Nationals' Adam Eaton scores on a hit by Anthony Rendon during the third inning of Game 3 of the baseball National League Championship Series against the St. Louis Cardinals Monday, Oct. 14, 2019, in Washington. (AP Photo/Jeff Roberson) 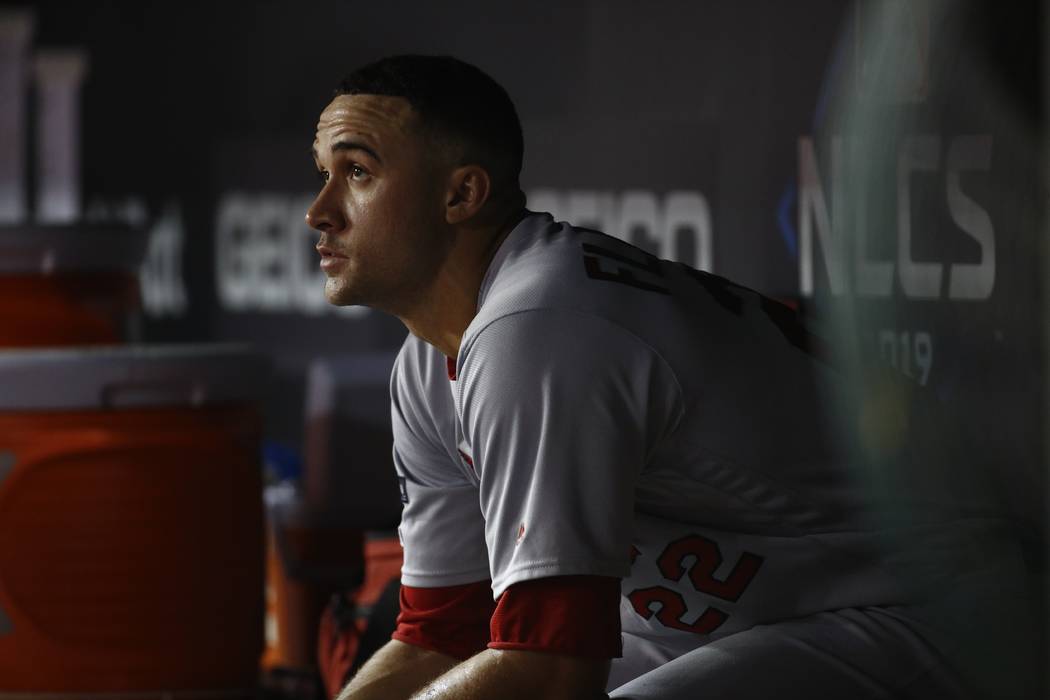 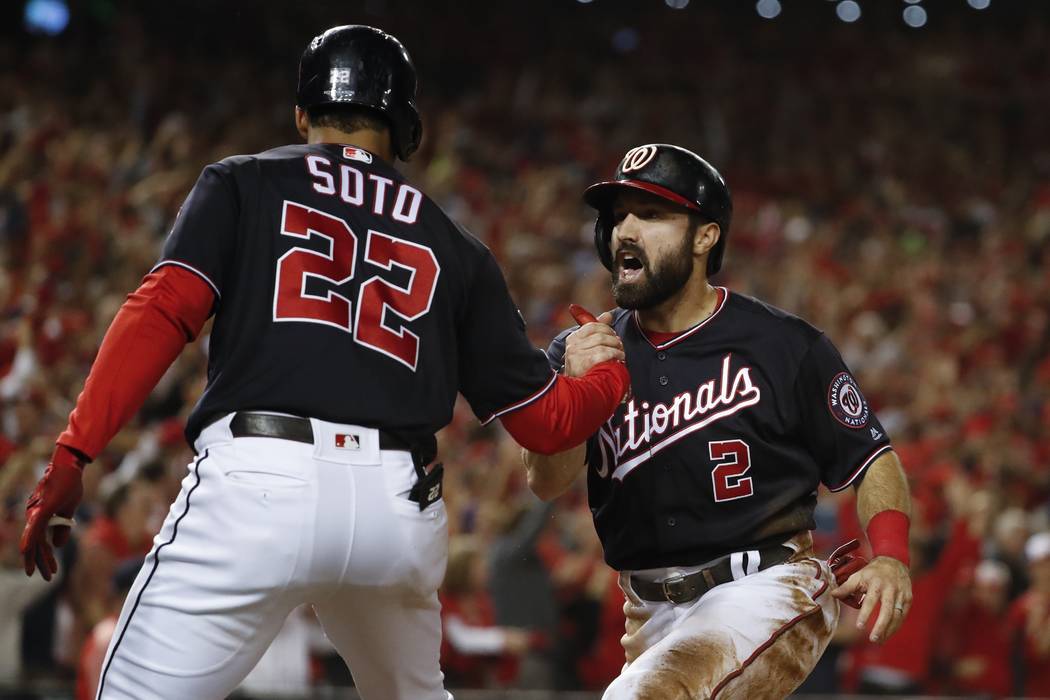 Washington Nationals' Adam Eaton celebrates with Juan Soto (22) after scoring on a hit by -Anthony Rendon during the third inning of Game 3 of the baseball National League Championship Series against the St. Louis Cardinals Monday, Oct. 14, 2019, in Washington. (AP Photo/Jeff Roberson)

After Nationals starters Aníbal Sánchez and Max Scherzer flirted with no-hitters in the first two games of the best-of-seven series, Strasburg wasn’t quite that untouchable: He allowed a double in the second inning, six later singles and one unearned run. Still, he was rather dominant for seven innings, striking out 12 batters and finishing off each one with an off-speed pitch.

The Cardinals, quite simply, can’t hit in this NLCS: They have a grand total of two runs and 11 hits through three games. Washington’s three starters have a combined ERA — no calculator necessary for this one — of 0.00.

Now it’s Patrick Corbin’s chance to see if he can match his rotation-mates. The $140 million lefty will start for the Nationals in Game 4 on Tuesday night, when they can close out a sweep at home. Rookie right-hander Dakota Hudson will be on the mound for the Cardinals.

“We’ve got to get a lead at some point in this series. Hard to win a game if you can’t get a lead,” St. Louis manager Mike Shildt said. “We’ve got to figure out a way to create some offense early in the game and be able to hold it there. It’s the first time our pitching hasn’t been able to contain this offense. I’m confident we’ll be able to do that tomorrow.”

Washington hasn’t put a baseball team in the World Series since 1933, when the Senators lost to the New York Giants in five games. The nation’s capital owns only one MLB championship; the Senators won all the way back in 1924. There wasn’t even a baseball team at all in Washington for more than three decades until the Montreal Expos franchise moved to town before the 2005 season and was renamed the Nationals.

Until this season, the Nationals hadn’t won a playoff series, going 0-4 since 2012, but they sure look as if they’re making up for lost time.

It all starts with the pitching.

Against Sánchez in Game 1, the first hit for the Cardinals arrived with their 27th batter. Against Scherzer in Game 2, it was their 21st batter. But even when the Cardinals did something right against Strasburg, they erased it by doing something wrong.

Their fourth batter, Marcell Ozuna, doubled to the left field corner in the second, then quickly erased himself with some poor baserunning, going too far toward third on a comebacker and getting tagged out by Strasburg, who is enjoying a postseason to remember.

He was the No. 1 overall pick in the 2009 amateur draft, then was infamously shut down before the playoffs three years later to protect his surgically repaired right elbow. Strasburg is now hale and hearty, throwing 117 pitches Monday, his most since totaling 118 in a May 2017 game.

And this sort of October excellence is what the Nationals were hoping for: Strasburg has a 3-0 record and 1.64 ERA, with 33 strikeouts and one walk — he didn’t issue a free pass Monday — in 22 innings this postseason.

“He’s been a blast this year. It’s been good to be around him. I’ve seen him kind of transition into the guy he is now, dominant out on the field. He’s definitely having fun in the clubhouse,” Kendrick said. “It’s special to see what he’s doing this year.”

Much to the delight of a red towel-twirling crowd of 43,675, Washington’s batters kept delivering, led by Kendrick, who has eight RBIs in the past four games, including a 10th-inning grand slam in Game 5 of the NL Division Series against the Los Angeles Dodgers.

The Nationals roughed up Jack Flaherty for four runs, all in the third inning; the Cardinals’ 23-year-old starter hadn’t allowed that many in a game since July 2, a span of 18 appearances.

Seven of Washington’s eight runs came with two outs, and there were contributions from up and down the lineup: Ryan Zimmerman delivered two run-scoring hits, Victor Robles homered in his return after a five-game absence with a leg injury, and Rendon heard “MVP!” chants after a slick defensive play at third base and an RBI double.

“I think we put together some good at-bats. We got some guys on and some guys put some good swings on the ball,” Kendrick said.