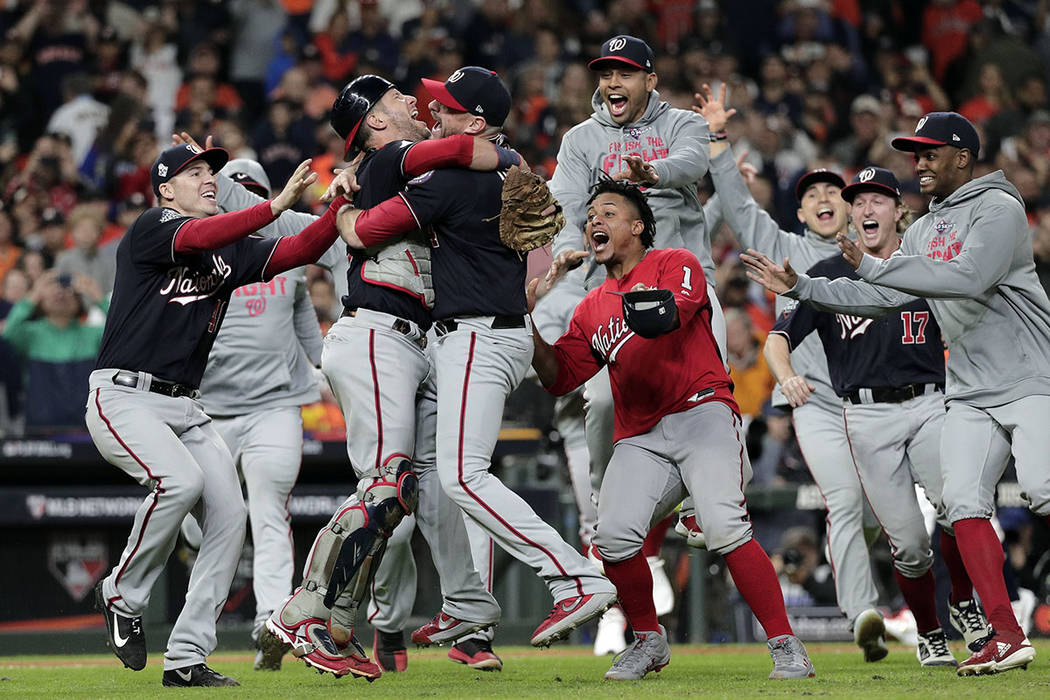 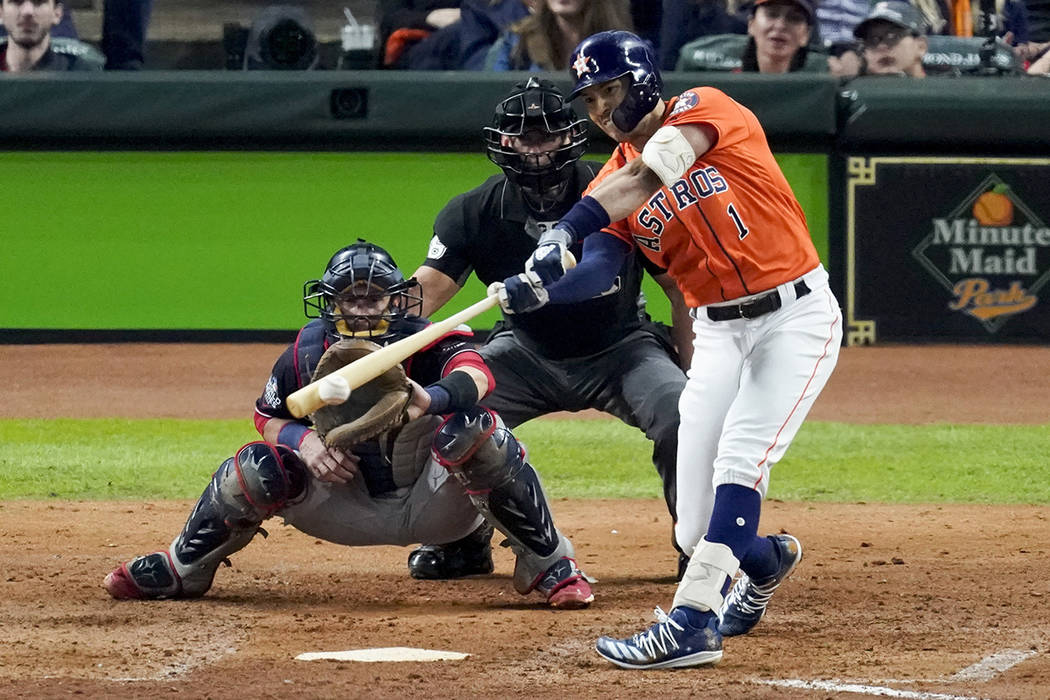 Houston Astros' Carlos Correa hits a RBI-single against the Washington Nationals during the fifth inning of Game 7 of the baseball World Series Wednesday, Oct. 30, 2019, in Houston. (AP Photo/Eric Gay) 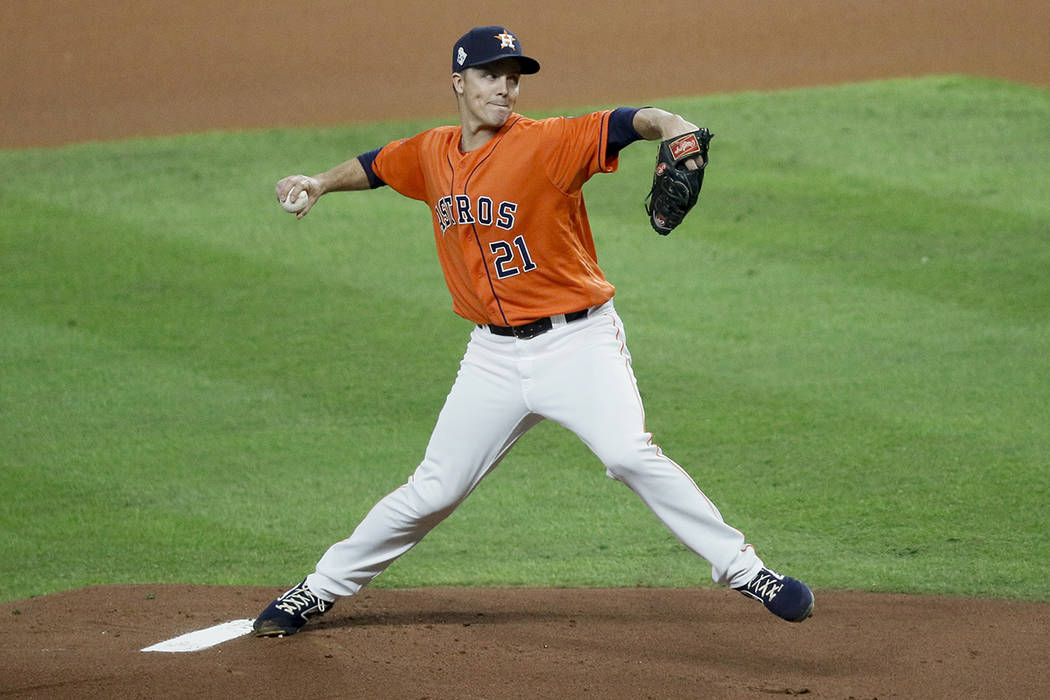 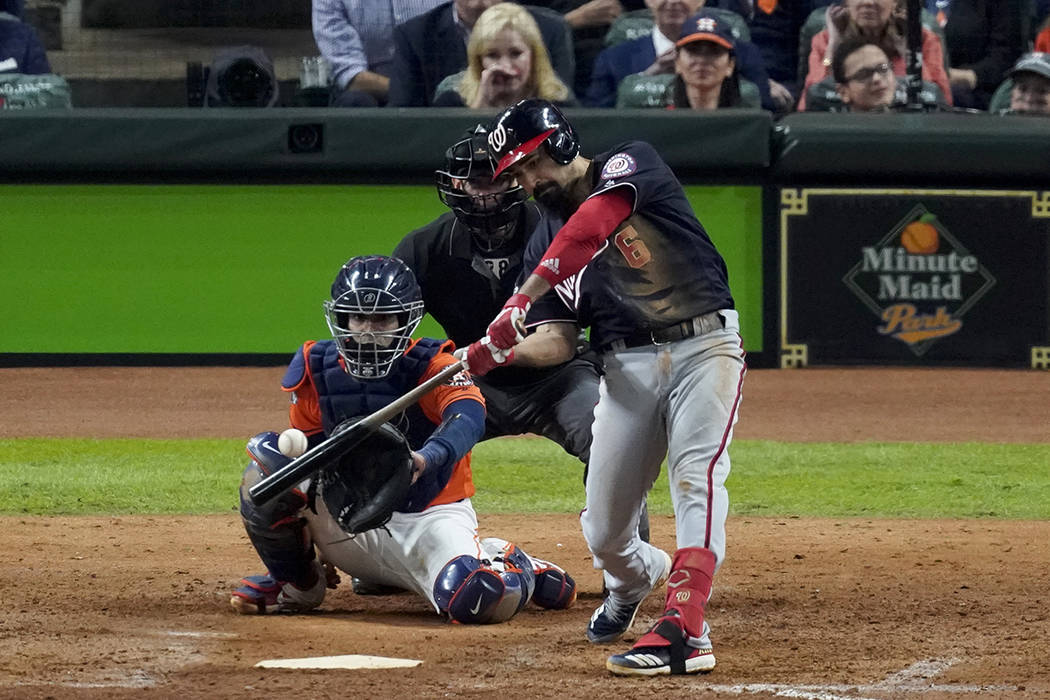 Washington Nationals' Anthony Rendon hits a home run against the Houston Astros during the seventh inning of Game 7 of the baseball World Series Wednesday, Oct. 30, 2019, in Houston. (AP Photo/Eric Gay) 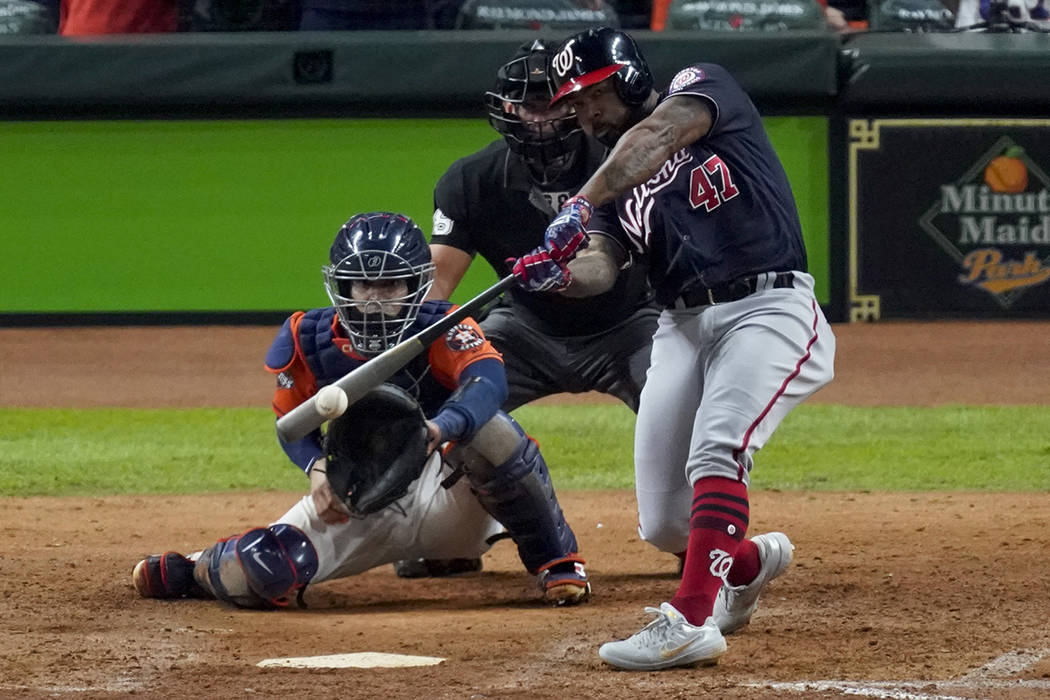 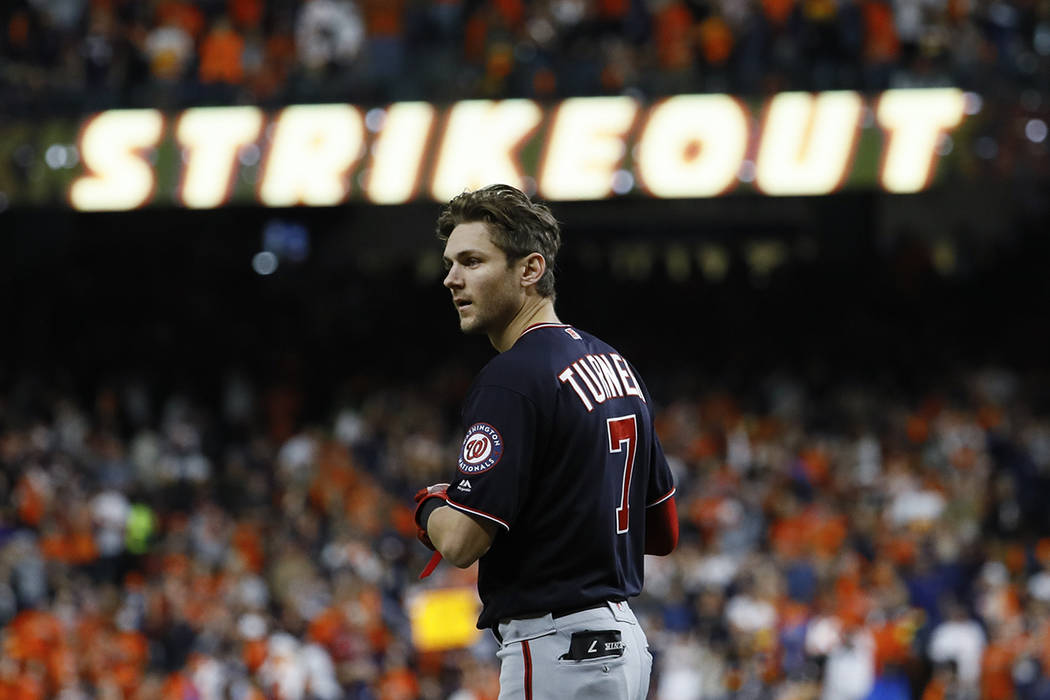 Washington Nationals' Trea Turner reacts after his strikeout during the sixth inning of Game 7 of the baseball World Series against the Houston Astros Wednesday, Oct. 30, 2019, in Houston. (AP Photo/Matt Slocum) 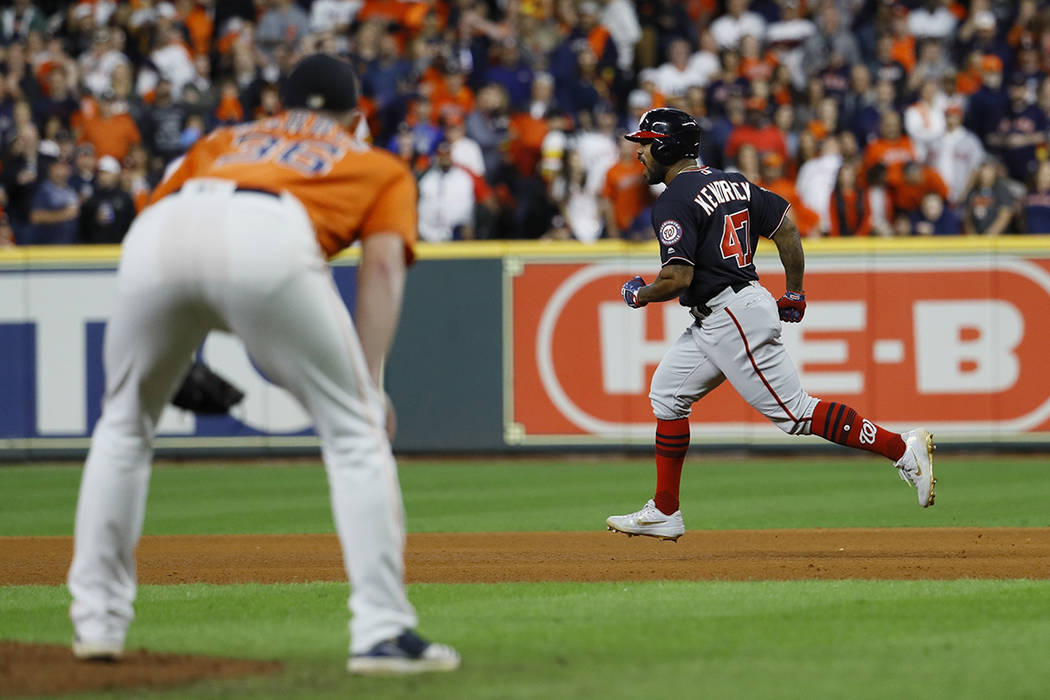 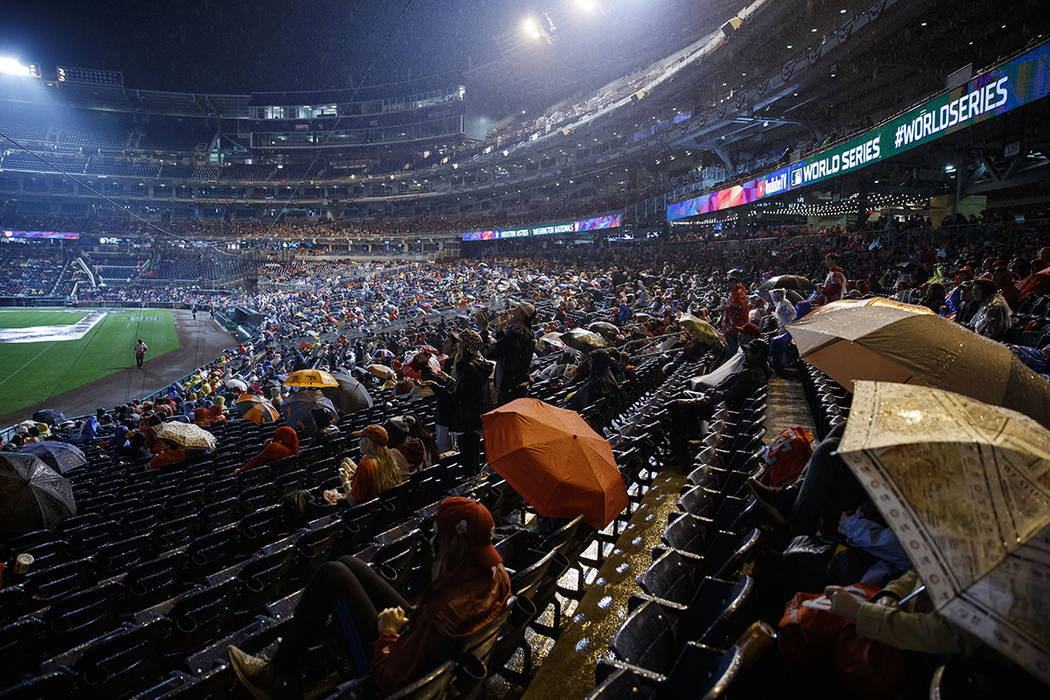 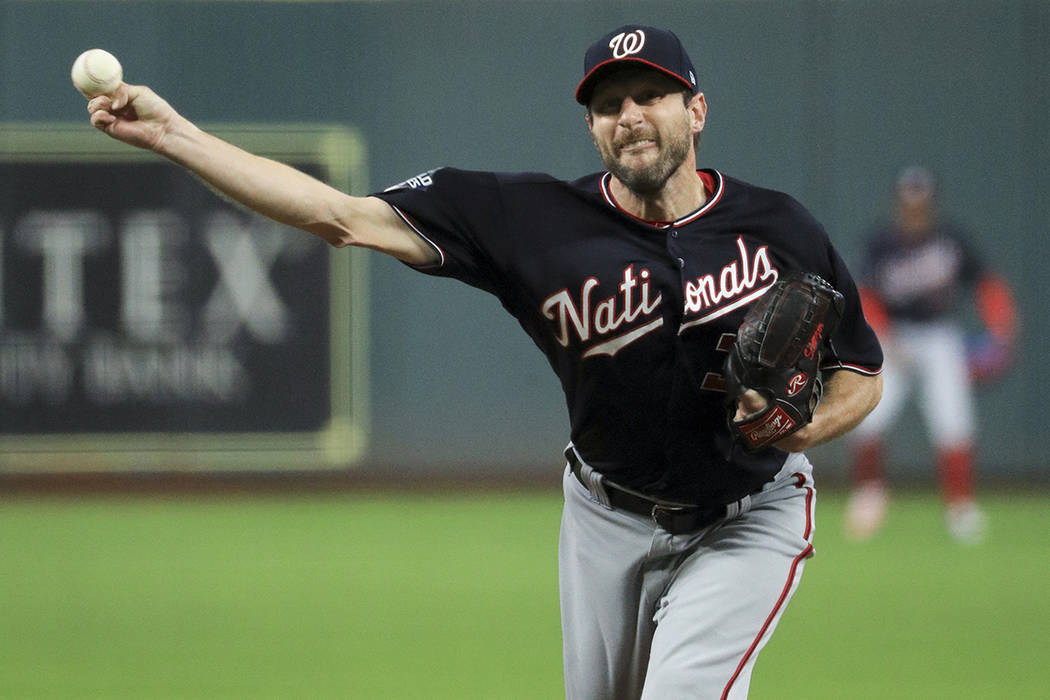 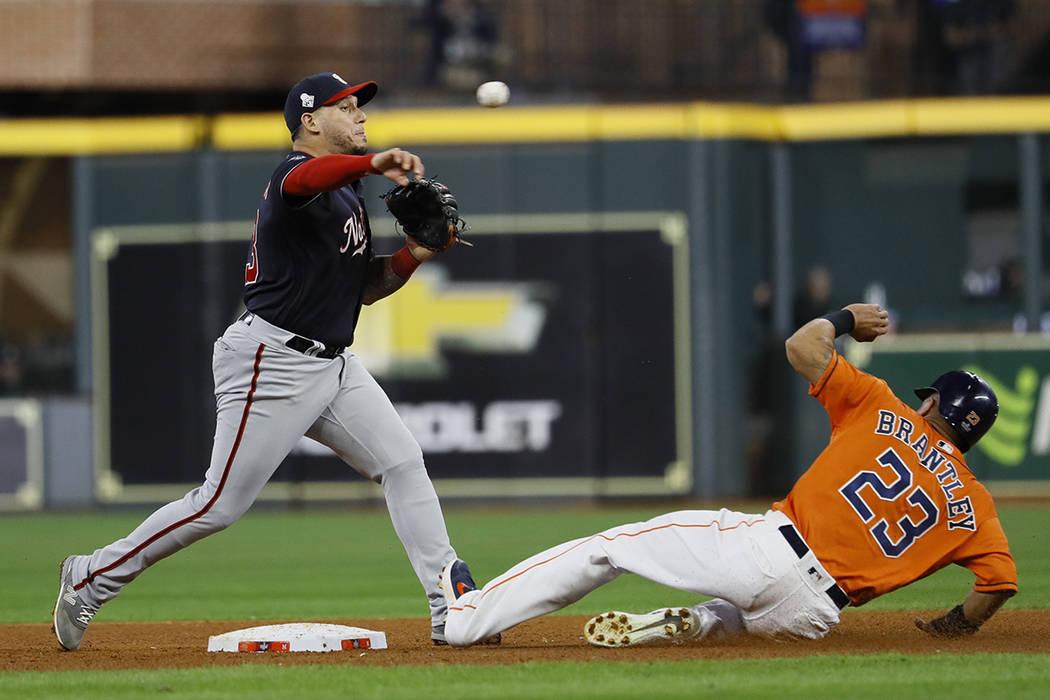 Houston Astros' Michael Brantley is out as Washington Nationals' Asdrubal Cabrera tries to double up on a ball hit by Yuli Gurriel during the fifth inning of Game 7 of the baseball World Series Wednesday, Oct. 30, 2019, in Houston. Gurriel beat the throw. (AP Photo/Matt Slocum) 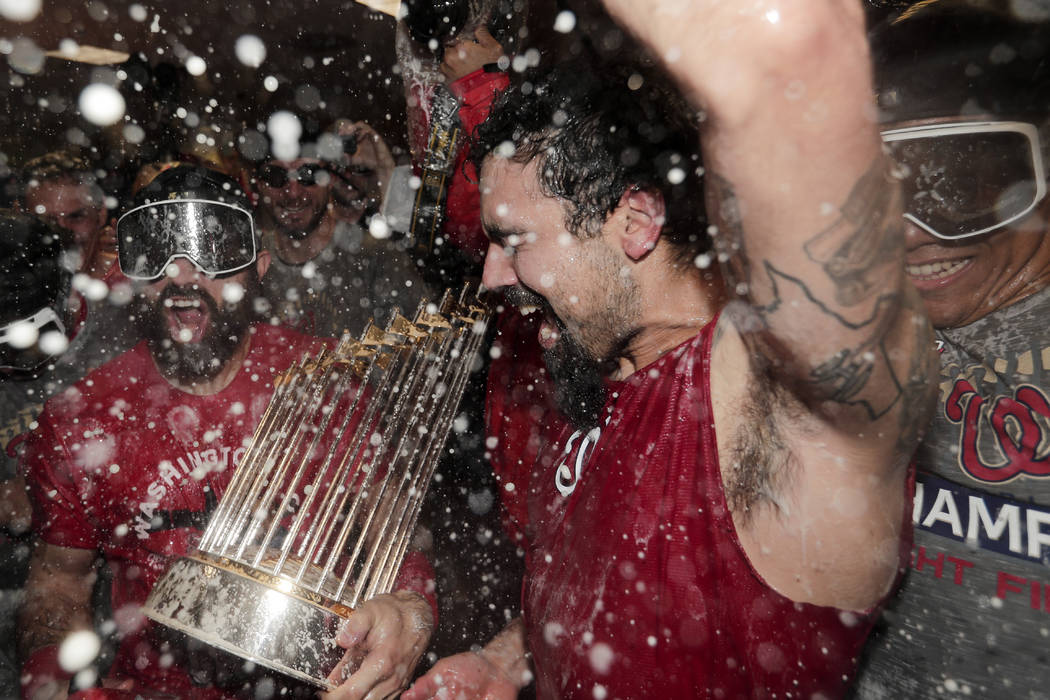 Washington Nationals third baseman Anthony Rendon and Adam Eaton celebrate in the locker room after Game 7 of the baseball World Series against the Houston Astros Wednesday, Oct. 30, 2019, in Houston. The Nationals won 6-2 to win the series. (AP Photo/David J. Phillip) 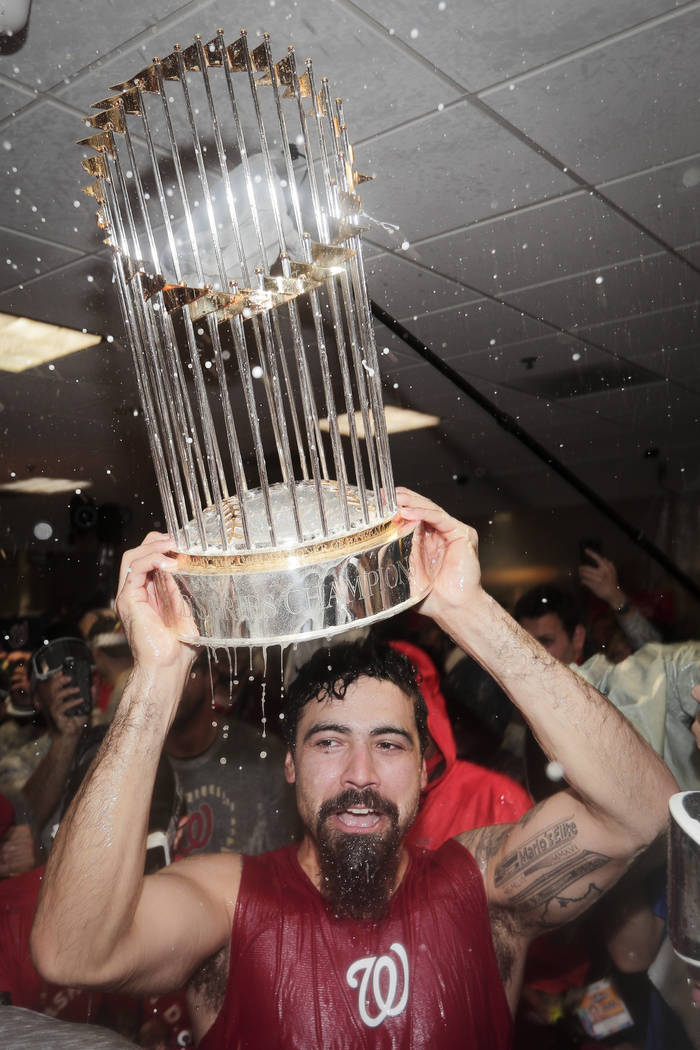 Washington Nationals third baseman Anthony Rendon celebrates with the trophy in the locker room after Game 7 of the baseball World Series against the Houston Astros Wednesday, Oct. 30, 2019, in Houston. The Nationals won 6-2 to win the series. (AP Photo/David J. Phillip) 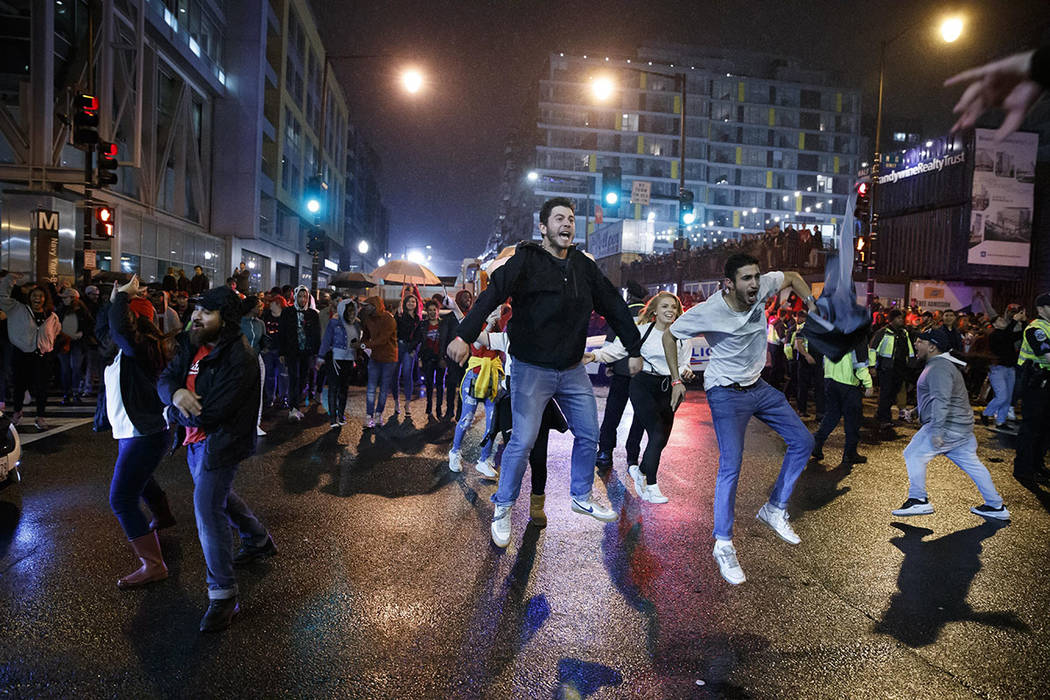 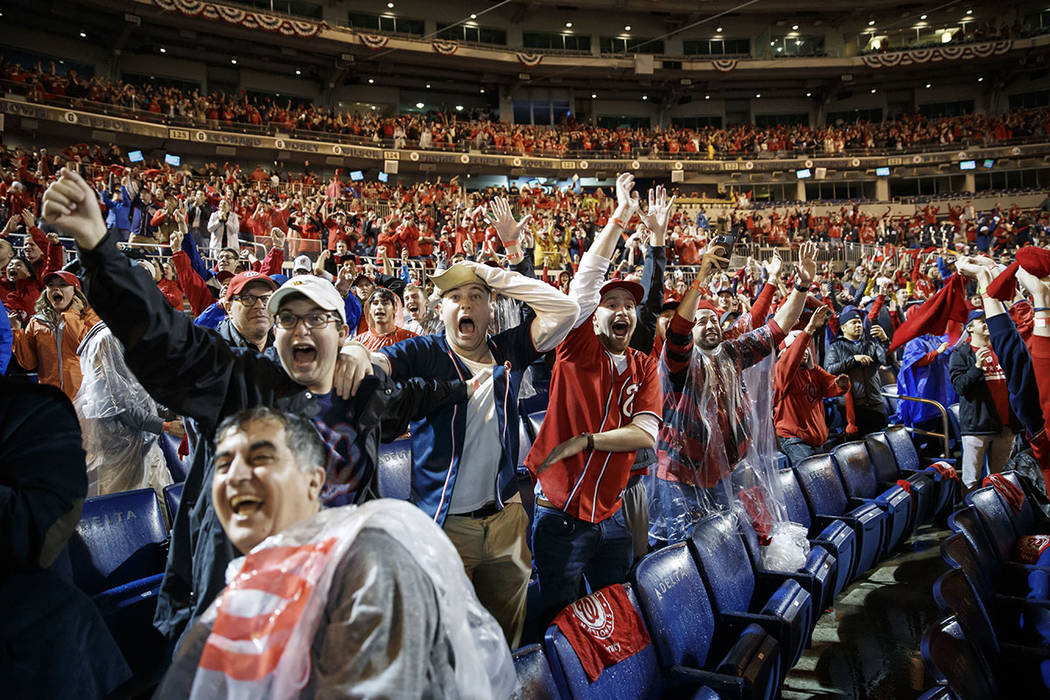 Almost out of contention in May, champs in October.

Howie Kendrick, Anthony Rendon and the Washington Nationals completed their amazing comeback journey — fittingly with one last late rally on the road.

In Game 7 of the World Series, no less.

Kendrick and Rendon homered in the seventh inning as the Nationals overcame a two-run deficit, rocking the Houston Astros 6-2 Wednesday night to win the first title in franchise history.

With all eyes on Scherzer and his remarkable recovery after a painkilling injection, these Nationals truly embraced their shot in the only Series when the road team won every game.

Even more against the odds: Juan Soto and Washington came from behind to win five elimination games this postseason, an unprecedented feat.

“What a story,” said Ryan Zimmerman, the only player who’s been a part of every Nationals team.

“The way this game went is the way our whole season went,” he said.

Strasburg, new lefty Patrick Corbin and the Nats brought the first World Series championship to the nation’s capital since ol’ Walter Johnson delivered the crown for the Senators in 1924.

This franchise started out as the Montreal Expos in 1969 when the major leagues expanded beyond the border, putting a team with tricolor caps at jaunty Jarry Park. They moved to D.C. in 2005, ending Washington’s three-decade-plus wait for big league baseball after the Senators left town to become the Texas Rangers.

But the incredible path these wild-card Nationals with the curly W logo took, well, no one could have imagined.

Because in one topsy-turvy week, they put aside the pain of past playoff failures.

Having lost star slugger Bryce Harper in free agency and beset by bullpen woes, Washington plummeted to 19-31 in late May. It got so bad there was talk around town the Nationals might fire Martinez and trade away Scherzer.

Instead, they stuck with the mantra that sprung up on T-shirts — Stay In The Fight.

“That was our motto,” Scherzer said.

And months later they finished it, indeed.

“Guess what? We stayed in the fight. We won the fight!” Martinez shouted during the trophy celebration on the field.

Strasburg earned the MVP with a pair of wins, including Game 6.

“It’s almost like we’ve done it so many times that we have to get punched in the face to kind of wake up,” he said.

As pitcher Aníbal Sánchez told Scherzer while hugging him in the middle of the diamond: “We won one. We finally won one.”

For the 43,326 revved-up fans at Minute Maid Park, it was a combination of shock and disappointment. So close to seeing José Altuve, Alex Bregman, George Springer and their Astros add to the title they won in Game 7 at Dodger Stadium two years ago, they watched this chance suddenly vanish as Houston fell apart.

“I’ve got a group of heartbroken men in there that did everything they could to try to bring a World Series championship to this city. And we fell one win shy,” Astros manager AJ Hinch said.

“Let’s be honest, there’s 28 other teams that would love to have our misery today,” he said. “And I just told our team, it’s hard to put into words and remember all the good that happened because right now we feel as bad as you can possibly feel,” he added.

President Donald Trump, greeted with chants of “Lock him up!” when he attended Game 5 in Washington, tweeted his congratulations to the Nationals from the White House.

Washington kept pulling away after taking the lead, with the sensational Soto hitting an RBI single in the eighth and Adam Eaton adding a two-run single in the ninth.

Zack Greinke was in complete control with a one-hit shutout until Rendon — a Houston prep and college star — hit a solo homer with one out in the seventh that made it 2-1.

When Soto followed with a one-out walk, Hinch decided to make a move. He’d had ace starter Gerrit Cole warming up earlier, but left him in the bullpen.

“I wasn’t going to pitch him unless we were going to win the World Series and have a lead,” Hinch said. “He was going to close the game in the ninth.”

Instead, Hinch signaled for reliable reliever Will Harris.

Kendrick connected on the second pitch, slicing a drive that hit the screen attached to the right field foul pole for a 3-2 lead. Just like that, everything had changed for the team in orange that led the majors with 107 regular-season wins, and the ballpark fell silent.

For Kendrick, another timely blow. At 36, playing on the oldest team in the majors, the journeyman was the NL Championship Series MVP against St. Louis after hitting the winning grand slam in the 10th inning of the deciding Game 5 in the Division Series at Dodger Stadium.

Then again, this was nothing new for the Nationals.

Washington rallied in the eighth to beat Milwaukee in the wild-card game and took the last two to beat Los Angeles in the NLDS, setting up a sweep of the Cardinals in the NLCS.

“This is now the most 2019 Nats thing to ever happen,” Doolittle said. “Another elimination game, another come-from-behind win.”

Far away, a sizable crowd poured into Nationals Park for a watch party. That was the stadium where Houston hammered the Nats for three games last weekend in taking a 3-2 edge, but their luck changed in Texas.

And they won the last two against a team that posted the best home record in the majors (60-21) over the last two decades. Houston earned home-field advantage throughout the postseason, but it didn’t help in the end as the Astros went a stunning 0-4 in their own ballpark during the Series.

“I hope D.C.’s ready for us to come home!” shouted Zimmerman, the Nationals’ initial draft pick back in 2005.

Martinez said Soto, who turned 21 last week, celebrated with his first beer. Meanwhile, the skipper, who had a heart procedure six weeks ago and can’t resume his six-cups-a-day coffee habit, headed back to the clubhouse for a special treat.

With Greinke and Scherzer grunting on every pitch, Game 7 started as a classic duel.

Yuli Gurriel put the Astros ahead with a home run in the second and Carlos Correa added an RBI single off Scherzer that made it 2-0 in the fifth.

Scherzer was done after the fifth. Only a few days earlier, the three-time Cy Young Award winner had been unable to lift his right arm due to nerve irritation near his neck.

Daniel Hudson, released by the Angels in March, closed it out for the Nationals, who made Houston pay for stranding so many runners all game. Hudson struck out Michael Brantley for the last out, then threw his glove to start the celebration.

Houston shares a spring training complex in Florida with the Nationals and reported to camp in February full of high hopes.

The Astros breezed to the AL West title, edged Tampa Bay in a five-game ALDS and topped the Yankees in the ALCS. They had a front-office fiasco in October, which led to the firing of an executive for a boorish rant at female reporters during a clubhouse celebration.

“Yeah, the ultimate goal is to win the World Series, and we fell short to a great team. You can’t hang your head low about that,” Springer said. “You move on and start getting ready for spring training.”

The Nationals became the first wild-card team to win the Series since Madison Bumgarner and the Giants in 2014. Starting with San Francisco’s win, the last six champs have clinched on the road.

The Astros and Nationals start training side-by-side in a few months and open exhibition play with a World Series rematch on Feb. 22 at Ballpark of the Palm Beaches. They met in their Grapefruit League opener this year and Scherzer gave up a home run to the first batter of the game.