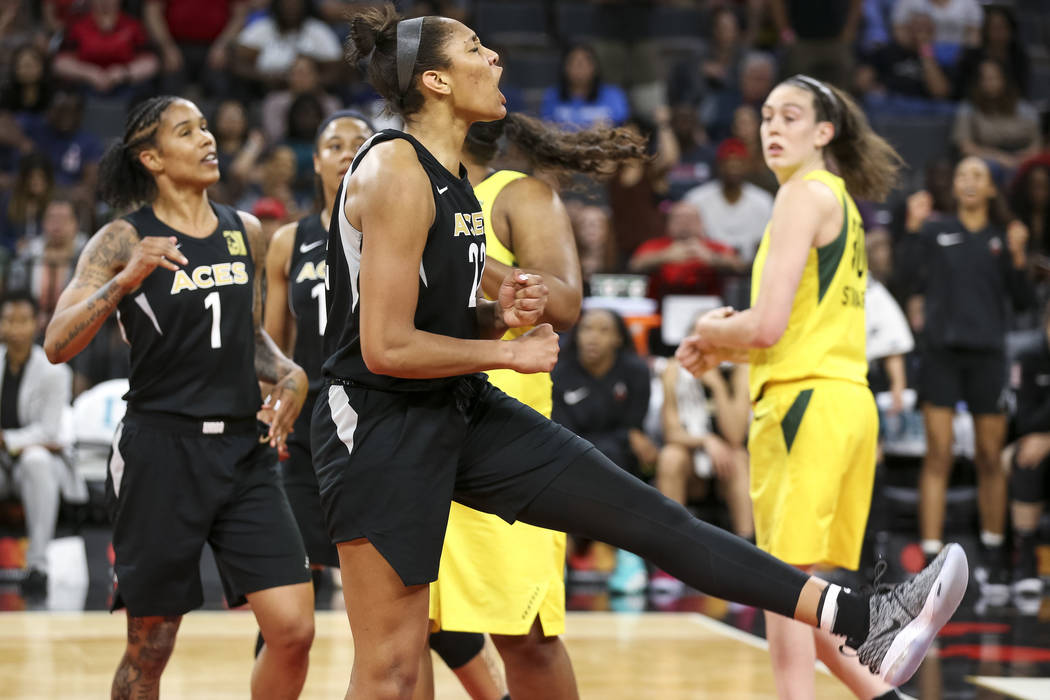 Las Vegas Aces center A'ja Wilson (22) reacts after getting fouled in the second half of a WNBA basketball game against the Seattle Storm at the Mandalay Bay Events Center in Las Vegas on Sunday, May 27, 2018. Richard Brian Las Vegas Review-Journal @vegasphotograph

The Aces are finally on the airwaves.

AT&T SportsNet will broadcast 15 of the team’s 17 home games, and all 17 regular-season home games and playoff games will air live on Las Vegas ESPN radio affiliates KWWN-AM (1100) and KWWN-FM (100.9).

A 30-minute pregame and postgame show will be included in the radio broadcast.

The combination of local media distribution is more comprehensive than that of most teams around the WNBA. Several teams do not have radio deals, and local TV deals vary from market to market.

“Our goal in selecting a television broadcast distributor was to bring the excitement of WNBA basketball to as many of our fans as possible,” said Lance Evans, corporate vice president of marketing-entertainment & sports for MGM Resorts International, in a statement.

“Not only do AT&T SportsNet and their Rocky Mountain Region network extend throughout Nevada, Utah, Colorado, Wyoming and parts of Southern California and Northern Arizona, but they are also the home of the Vegas Golden Knights, the Utah Jazz, the Colorado Rockies and other major sports properties. We couldn’t have asked for a better broadcast relationship as we begin our inaugural season.”

Anderson, who will do play-by-play, has called games for the Pac-12 network and has served as an analyst on several other sports channels, including ESPN.

Brown, the color commentator, played seven years in the WNBA and is serving, more or less, as the Aces’ brand ambassador on and off the court.

Pflugrad, the sideline reporter, also works for the NBA’s Boston Celtics, providing pregame and postgame interviews with players and coaches and recaps throughout the NBA season. She also has worked for ESPN, the New York Jets and Fox Arizona.

Katy Winge also will assist with Aces broadcasts throughout the season. She works as a reporter with the NBA’s Denver Nuggets.