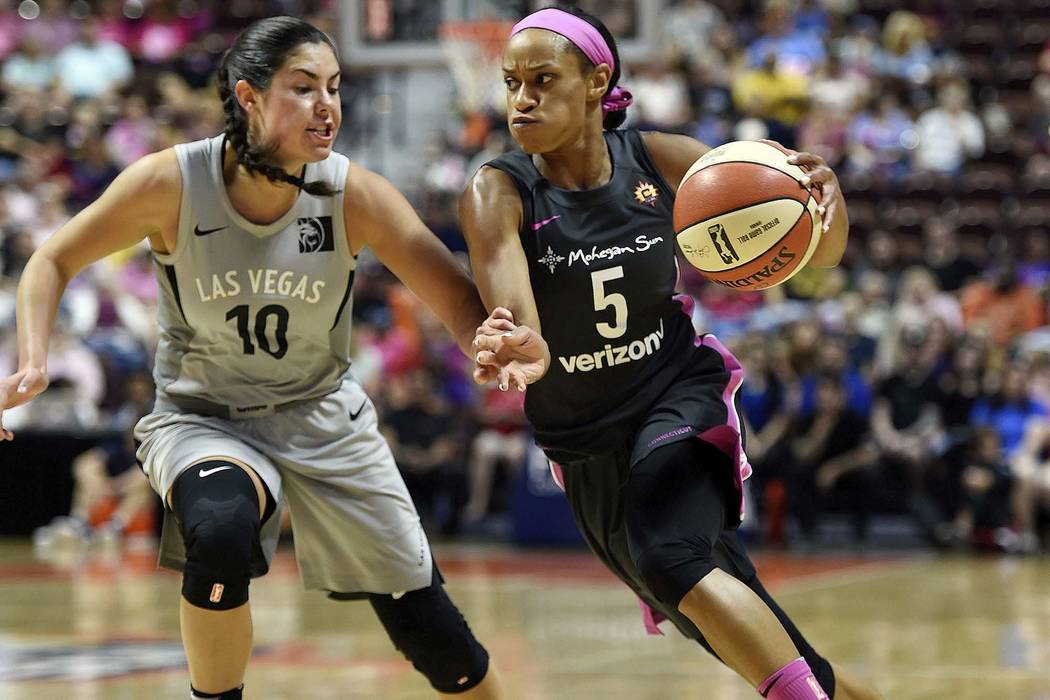 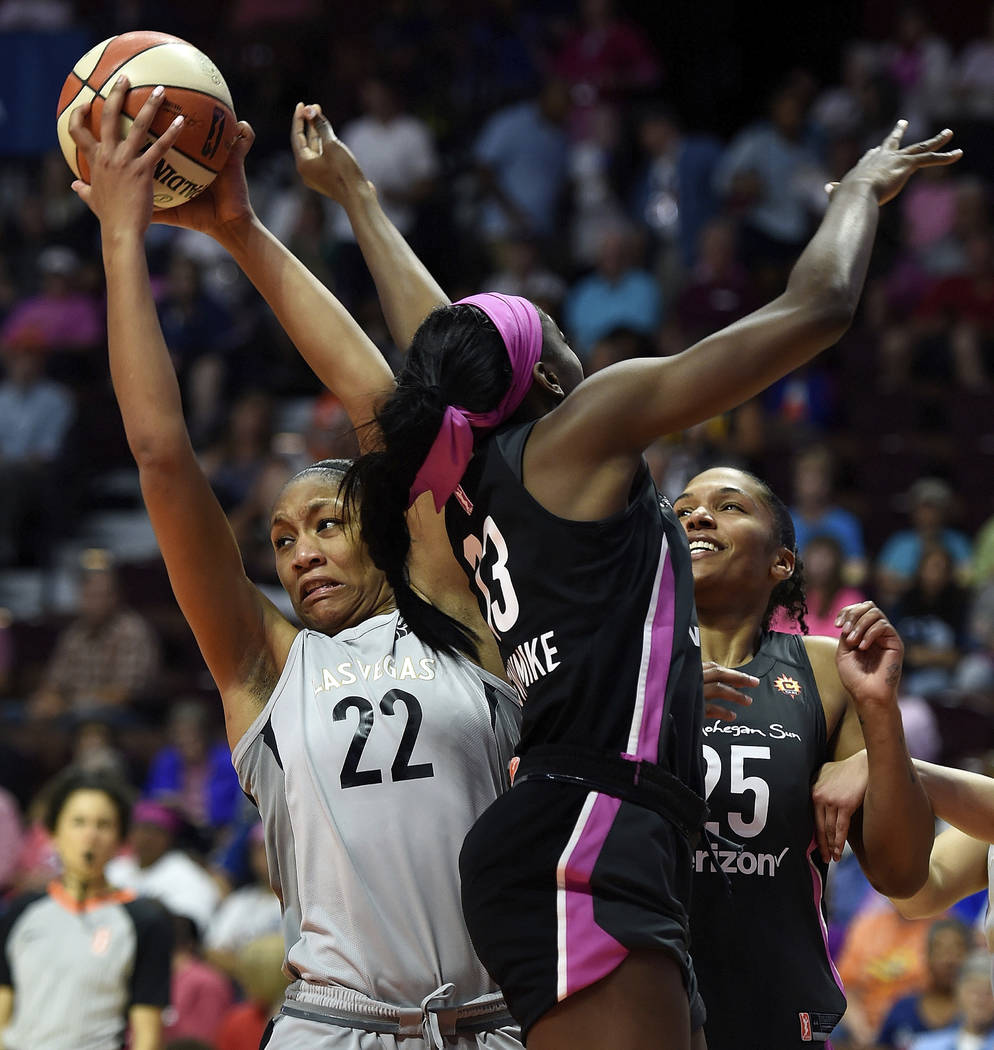 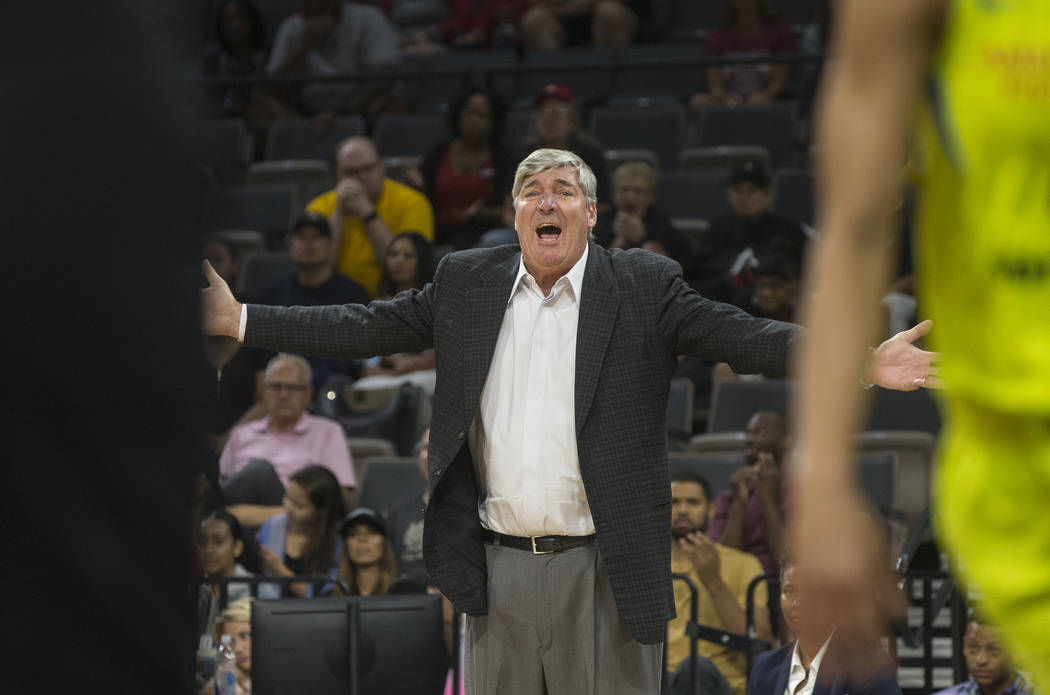 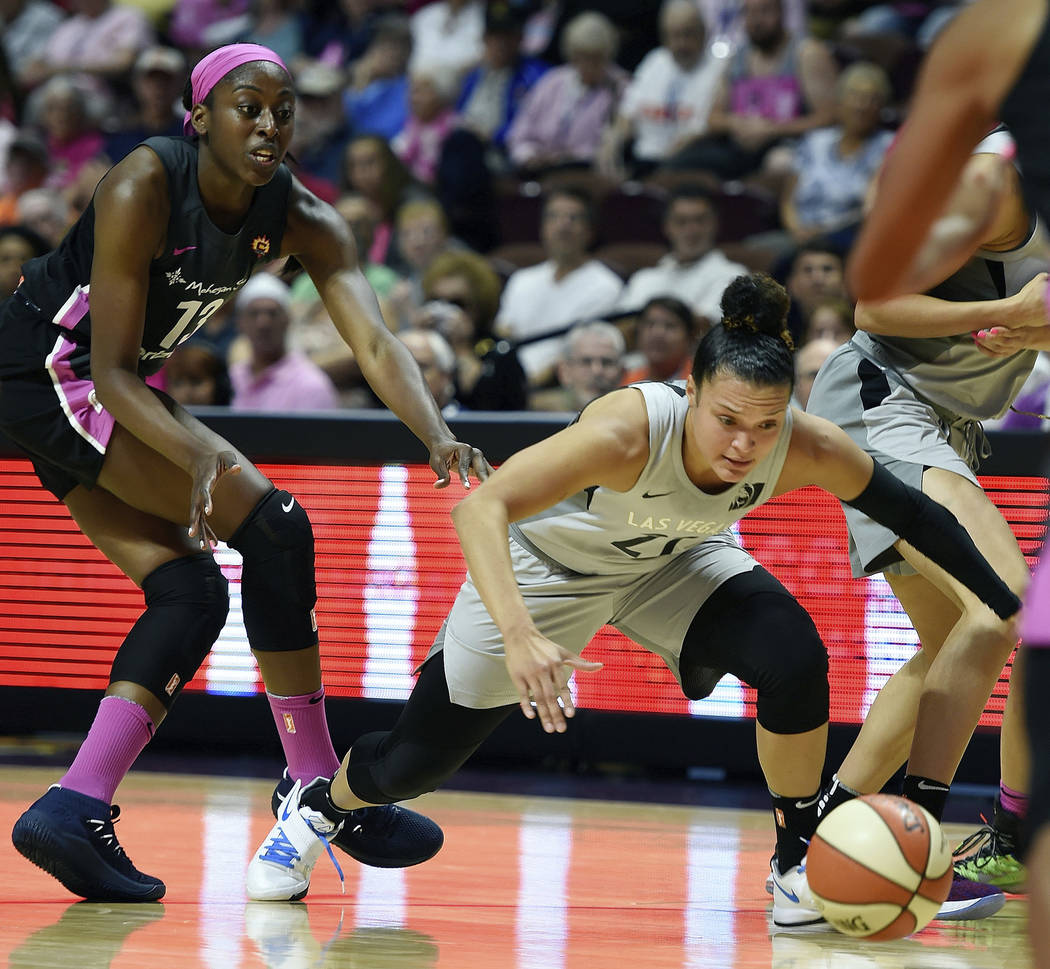 Las Vegas Aces guard Kayla McBride (21) dives after the ball after it was knocked away by Connecticut Sun forward Chiney Ogwumike (13) in the first half of WNBA basketball game action Sunday, Aug. 5, 2018, in Uncasville, Conn. (Sean D. Elliot/The Day via AP)

UNCASVILLE, Conn. – The entire idea of not playing Friday’s game in Washington was to assure the preservation of the Aces body and spirit after the biggest travel nightmare in their first season in Las Vegas.

And after a night of rest in Connecticut, on beds instead of uncomfortable chairs in airports, the Aces took the floor Sunday at Mohegan Sun Arena intent to move closer to the postseason.

Instead, the Connecticut Sun were the energized team. They benefited from a record-setting first half to crush the Aces 109-88. Jasmine Thomas scored a career-high 30 points, including five 3-pointers, to lead the Sun.

“They made all their shots, they came to play and found their mojo again,” said Aces coach Bill Laimbeer. “We played OK, not our stellar game. We’re still learning, we’re still young. There’s a lot of inexperience out there, especially once we made substitutions. It’s just one loss on the road so you just keep moving on.”

The game was the first for the Aces after they decided not to play in Washington on Friday night because of travel woes that took the team nearly 26 hours to get to D.C.

The league has yet to announce its decision regarding a possible forfeiture for the Aces’ choice not to play against the Mystics. The Aces (12-15) are now 1½ games behind Dallas (14-14) for the eighth seed in the playoffs.

This was just the second game in two weeks for the Aces since their home win over Indiana on July 22. They had not been on the road since a game in Phoenix three days earlier.

“We were expecting what we call the cannon effect because the team is so well-rested,” said Sun coach Curt Miller. “They have a chip on their shoulder (because of Friday).”

The cannon backfired. The Sun (16-12) built a 28-20 lead with 2:35 to play in the first quarter, just a few seconds after Laimbeer lumbered onto the floor and earned a technical.

A major part of the Aces problem was how well the Sun shot in the first 14 minutes. They made 20 of their first 28 attempts to open a 48-32 lead.

Connecticut finished with a franchise single-game record of 46 made field goals.

Thomas scored 20 points before Connecticut took a 64-49 lead into the break. The Sun set season highs for points, field goals (26) and field-goal percentage (68.4) in the first half. The Sun’s 64 first-half points set the franchise record for points in a half and their 109 total points were one shy of the team record.

As for Friday’s decision not to play in Washington, Carolyn Swords, the Aces’ union representative, reiterated on Sunday that the team gave their decision a lot of thought.

“We took all into consideration,” Swords said before the game. “It was a very involved and intricate discussion to have. We always want to be able to compete. We take the responsibility very seriously to play in front of our fans. It goes to show how much it weighed on us as we were deciding. A possible forfeit is not helpful, but it really was an issue of health and safety.”

Swords was the only player authorized to speak about the situation. Laimbeer refused comment pending the league’s decision.