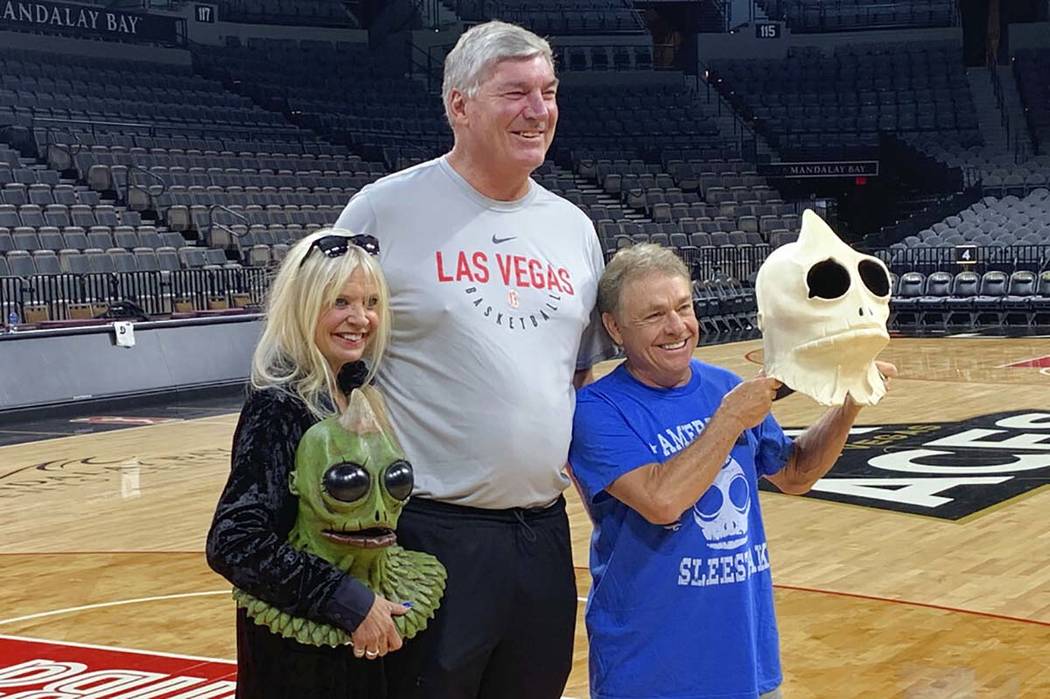 Bill Laimbeer, center, coach of the WNBA's Las Vegas Aces basketball team, poses for photos with Kathy Coleman, left, and Wesley Eure on Tuesday, July 30, 2019, in Las Vegas. Laimbeer spent a season playing a Sleestak on the hit television show "Land of the Lost." He played one of the nearly 7-foot-tall reptilian creatures in the first season of the show in 1974. Former cast members Coleman (Holly) and Eure (Will), who starred in the show, came to the Aces’ shootaround and surprised Laimbeer and the team. The duo was in town for a convention that starts Wednesday. (AP Photo/Doug Feinberg)

LAS VEGAS — Before he played for the Detroit Pistons and then went on to be a successful WNBA coach, Bill Laimbeer spent a season playing a Sleestak on the hit television show “Land of the Lost.”

He played one of the nearly 7-foot tall reptilian creatures in the first season of the show in 1974. The green villains are still some of the most popular characters from the cult classic that lasted three years.

“We had to wear wet suits and full masks and everything,” Laimbeer said. “We were supposed to be their enemies and we mainly just hissed on the show. It was a lot of fun.”

Laimbeer, who was from California, said he was being recruited by UCLA and USC at the time and they told him to go try out for the show because they were looking for tall, athletic males.

“It was easy money. People on TV only work 20 minutes out of a whole day,” Laimbeer recalled. “It was a lot of fun and a good experience, especially when you were 18 years old.”

Former cast members Kathy Coleman (Holly) and Wesley Eure (Will), who starred in the show, came to Las Vegas Aces’ shootaround Tuesday morning and surprised Laimbeer and the team. The duo was in town for a convention that starts Wednesday.

“Bill was the most popular Sleestak,” Eure said. “We had a reunion a few years back and he couldn’t make it because he had another commitment.”

Eure and Coleman had costume Sleestak heads, which Laimbeer laughed at. Eure presented Laimbeer with a piece of art signed by most of the other Sleestaks in the show.

“When the Sleestaks came on the show it took off and became the No. 1 show on NBC,” Eure said. “They made sure they could never catch us, to not scare the kids.”

The Aces posed for a photo with Eure and they all had Sleestak masks. Aces star A’ja Wilson said that Laimbeer showed the team stills from the show one day in a film session, but it didn’t really hit them how big the show was until Tuesday.

“He showed us film one day how he dressed,” Wilson said. “We didn’t know which one was him. We saw his name in the credits saying starring William Laimbeer. It’s cool to know your coach was once an actor.”