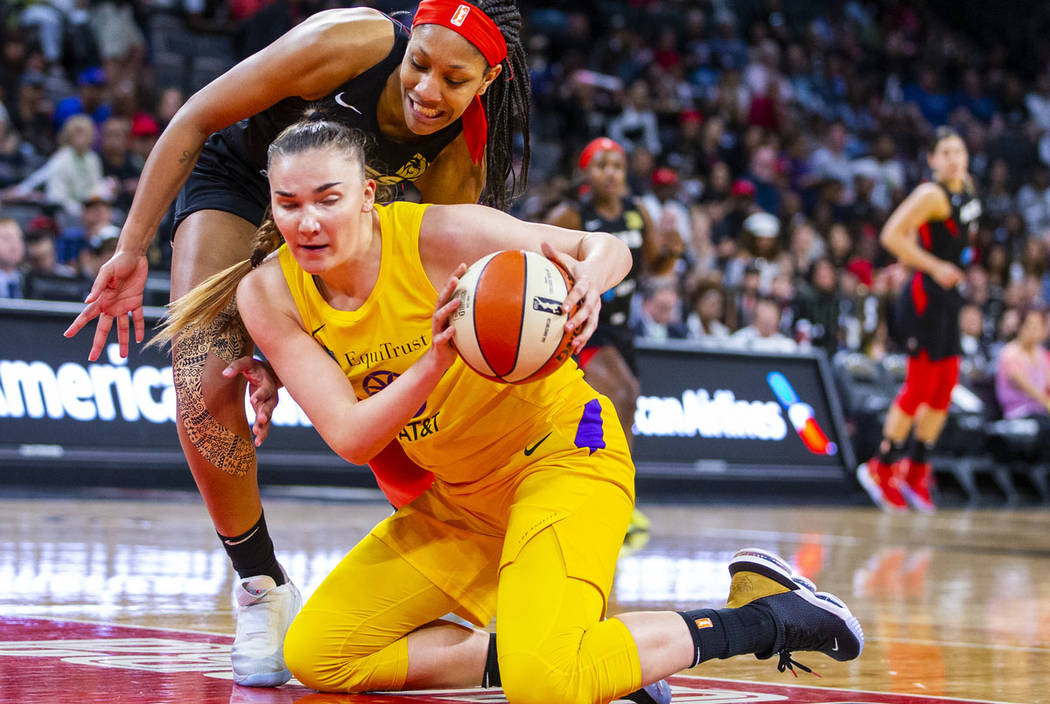 The Aces turned in an uninspired performance Tuesday night against the Seattle Storm and escaped with a victory.

They turned in another one Thursday night against the Los Angeles Sparks and weren’t nearly as fortunate.

Las Vegas committed 20 turnovers — mostly of the unforced variety — and stumbled to a sloppy 86-74 road loss at Staples Center.

Liz Cambage scored 18 points for the Aces on 9-for-12 shooting, but the starting backcourt of Kayla McBride, Kelsey Plum and Jackie Young mustered a mere 17 points on 5-for-28 shooting.

“We’re still trying to figure out each other on the offensive end,” McBride said. “I believe in every one of my teammates, and I know they’ll bounce back.”

The Aces (6-5) are averaging 16.8 turnovers, second most in the WNBA, but had won consecutive games to take the lead in the Western Conference.

They established Cambage early in the low post and she worked her way to 12 first-half points. But the team struggled to 10 more turnovers against a spirited defensive effort and trailed 40-34 at the break.

“You have to play great every single night. We’re in the league where every player is elite. … That’s the beauty of our league,” Aces forward A’ja Wilson said. “Every single night, you have to be on your A-game. There’s no plays off, there’s no games off, or you’ll get beat. It’s just as simple as that.”

The Sparks (5-6) intensified their pressure in the second half and hounded the Aces into several additional careless turnovers. They uncorked a 21-8 run across the third and fourth quarters and endured a late push to snap a four-game losing streak.

Reserve forward Dearica Hamby had 13 points and 10 rebounds for the Aces, and Wilson scored 13 as well.

Candace Parker, Chelsea Gray and Riquna Williams each had 18 points for Los Angeles.

“Turnovers are a big issue for us,” Aces coach Bill Laimbeer said. “I keep preaching that we’re going to lose games left and right because we don’t take care of the basketball, and this is a very tough league. If we keep turning it over like this, we’re going to have a problem.”