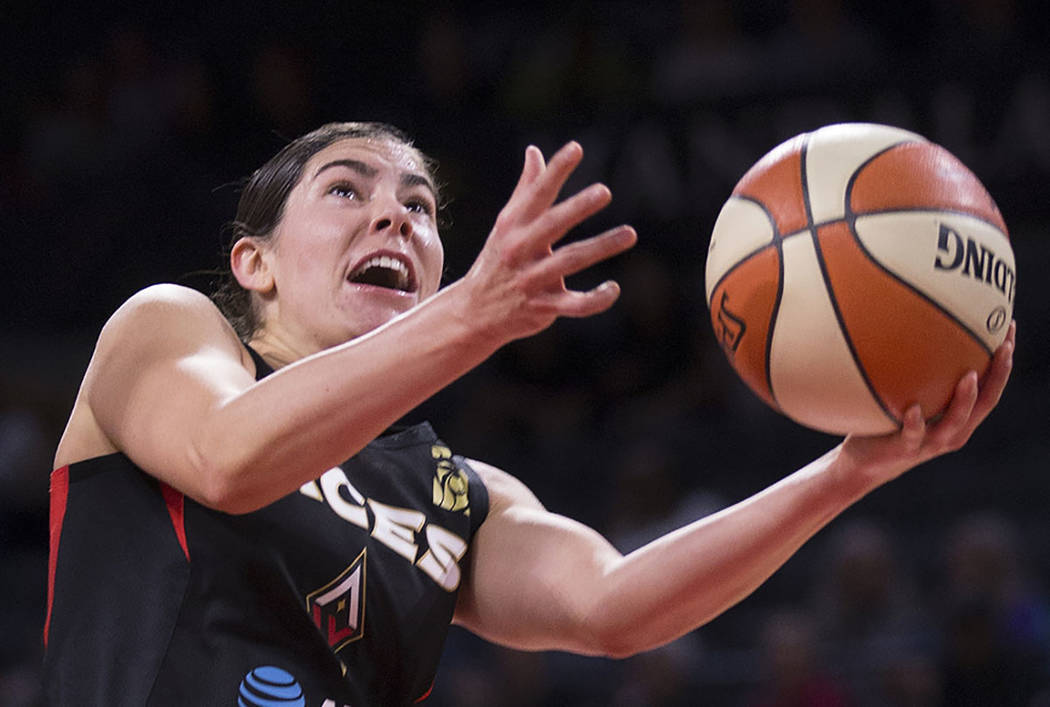 A blowout victory on Friday.

A comeback victory on Sunday.

Maybe the Aces are starting to figure this winning thing out.

Las Vegas overcame a dismal first half Sunday and a 10-point deficit in the second half to steal an 80-75 victory over the Minnesota Lynx at Target Center in Minneapolis. Kayla McBride had 22 points and Kelsey Plum made five 3-pointers to finish with 21 points.

Liz Cambage sank the go-ahead free throws with 2:01 to play in the fourth quarter and added two more in the final minute en route to 14 points and nine rebounds in a season-high 33 minutes.

“We can get caught up in focusing how much we’re down by,” Cambage said. “Or we can focus on getting stops and letting the offense flow and that’s what we did.”

Las Vegas (4-3) rolled to a 100-65 win over the New York Liberty on Friday, but struggled early Sunday against a defense designed to neutralize the frontcourt tandem of Cambage and A’ja Wilson.

Minnesota worked to deny low post position and committed a second defender — and additional weak-side help — after successful entry passes. The Aces still forced the ball into a congested lane, though, and trailed by 14 points in the second quarter. They also committed 13 turnovers during the first half.

Plum and McBride manufactured 23 points from the perimeter, and Las Vegas scraped its way to a 39-35 halftime deficit in spite of its offensive inefficiencies.

“I think sometimes we get complacent,” McBride said. “We know who we are offensively. We know we have a lot of weapons and sometimes we take advantage of that.”

The Lynx (4-5) uncorked a 16-6 run early in the third quarter, but the Aces countered with a 12-2 spurt fueled by an impassioned defensive effort — and 3-pointers from McBride, Plum and Sugar Rodgers.

McBride and Plum made consecutive 3-pointers late in the fourth quarter, and Cambage powered through Minnesota’s interior defense for four consecutive free throws.

And the gritty kind of victory coach Bill Laimbeer has waited to see.

“Overall, I think our team gutted this out,” said Laimbeer, who reiterated throughout training camp that the Aces must figure out how to win close games. “That’s what we talked about in the locker room. We’re growing. … Today was a great experience for us to keep our composure.”