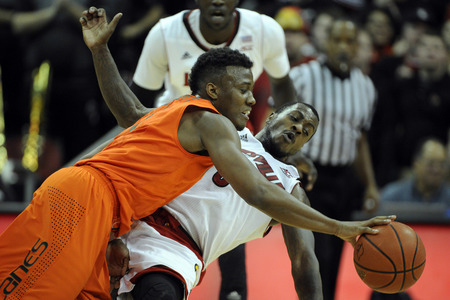 Chris Jones pleaded not guilty to charges of rape and sodomy in a Louisville court Thursday.

The former Louisville point guard, banned from the team Sunday, was in district court after a campus police report revealed a text message Jones sent to a woman included a threat to “smack” her.

Louisville coach Rick Pitino said Monday at Georgia Tech, where the 17th-ranked Cardinals pulled out a one-point win, that the team’s No. 3 scorer would never be allowed back on the team. Jones was suspended for one game on Feb. 17, then returned before the police report came to light.

“You don’t like to see anybody hurt, but there’s always accountability and doing the right thing and he didn’t and he’s got to get his life together, get on with his life. There’s no way he’s coming back,” Pitino said.