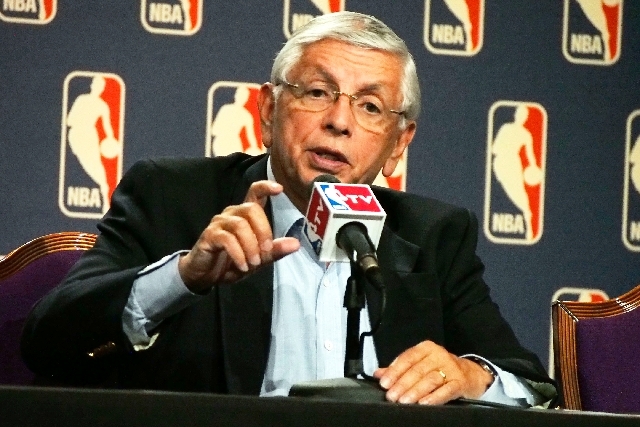 NBA commissioner David Stern's position on a franchise in Las Vegas has softened since 1999 judging by his comments Thursday. Stern spoke at a news conference following the board of governors meeting during the NBA Summer League in Las Vegas, taking note of efforts to build an arena and the regulation of gambling in Nevada. 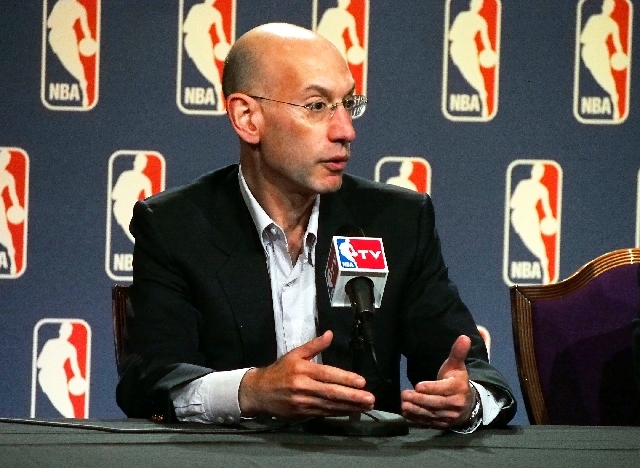 NBA deputy commissioner Adam Silver speaks during a news conference following the board of governors meeting during the NBA Summer League in Las Vegas on Thursday. Silver, who will take over for David Stern when he retires Feb. 1., 2014, declined to speculate on specifics about an NBA franchise in Las Vegas. 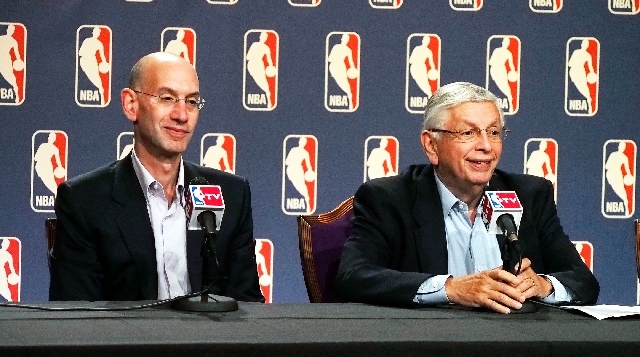 NBA deputy commissioner Adam Silver, left, and commissioner David Stern speak during a news conference following the board of governors meeting during the NBA Summer League in Las Vegas on Thursday. 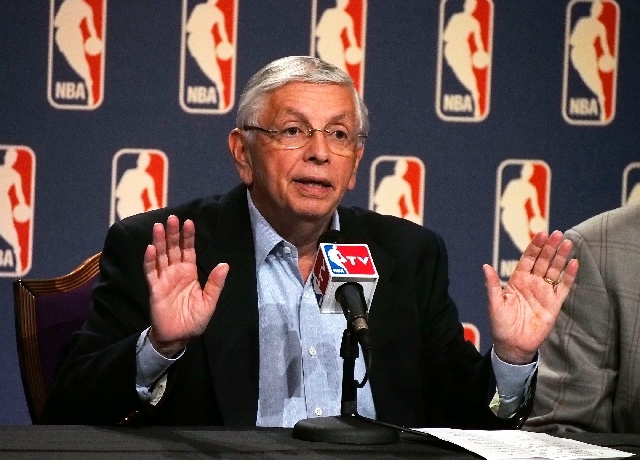 In comments Thursday, NBA commissioner David Stern called Las Vegas, "a huge entertainment destination and this is a place that we should embrace." Stern brought the NBA All-Star Game to Las Vegas in 2007, the only time a non-NBA city has hosted that event.

No, the NBA isn’t moving to Las Vegas just yet. But commissioner David Stern didn’t seem averse to the idea, which is a radical departure from his stance in 1999 when then-Mayor Oscar Goodman visited Stern at his New York office and was told it never would happen.

“I think Las Vegas is in the NBA history books, and with the discussions now, it seems that there is an arena that is getting closer to moving ahead after years and years of discussions,” Stern said Thursday at a news conference at Wynn Las Vegas following the league’s Board of Governors summer meeting. “And that should make it interesting as well.”

Stern was referring to the proposed arena project by MGM Resorts, which hopes to have it constructed and operational by 2016.

Stern, who will be retiring on Feb. 1 after 30 years, talked about the city in a far more favorable light than in the past, noting its support for the game.

“Given sort of all the references you see about Las Vegas and ‘Sin City,’ we have always believed that gambling is a very legal business regulated carefully in Nevada, that this is a huge entertainment destination and this is a place that we should embrace,” Stern said.

Las Vegas has a small part of Stern’s legacy as NBA commissioner. He was in charge the night Kareem Abdul-Jabbar broke the league’s scoring record in 1984 against Utah at the Thomas & Mack Center. He agreed to bring the All Star Game to the city in 2007, the only time a non-NBA city has hosted that event.

“I was here for the celebration,” Stern said proudly.

Stern’s support of using pros in the Olympics going back to 1992 ultimately helped pave the way for USA Basketball to use Las Vegas as its training base for the last two Olympics, which resulted in gold medals, as well as the upcoming 2016 Olympics in Brazil.

And the exponential growth of the NBA Summer League has made the city a gathering place for the sport during the offseason.

“I was worried we’d lose too many owners to go watch their teams play,” Stern said of the summer league’s impact. “It’s sort of getting to be that kind of an attraction. So it’s neat. It’s really good — here we are in the middle of July talking basketball in Las Vegas, which is always very powerful and positive.”

But is all that equity going to result in Las Vegas getting its own NBA team?

Adam Silver, the league’s deputy commissioner who will succeed Stern, said there are no plans to expand beyond the current 30 clubs. Seattle, which lost its bid to replace the SuperSonics with the Sacramento Kings, is still very much on the NBA’s radar for future expansion.

“No predictions in Las Vegas today from me,” Silver said. “There is no ongoing dialogue at the moment. We’re very focused on building and rebuilding the franchise in Sacramento, building a new arena there.”

But Silver, who has worked hard behind the scenes to grow the summer league in Las Vegas, will no doubt be keeping a close eye on the MGM project along with potential ownership groups for Las Vegas should the league decide at some point to expand from 30 to 32 teams.

In the meantime, the city will have to be content with the summer league, USA Basketball and preseason games for both the Los Angeles Lakers and the Clippers.

“I have no doubt that down the road we’ll return to those discussions in (Seattle) and Las Vegas and, who knows, other markets potentially as well,” Silver said. “Right now, we’re focused on the health of the 30 franchises in the cities they’re located in.”

Stern said: “It wouldn’t surprise me if Commissioner Silver was looking at strong applications from Las Vegas and Seattle in the coming years, and I’m going to enjoy watching it.”

While the NBA is not ready to address future growth, it did address the past on Thursday by allowing Charlotte to change its nickname back to the Hornets from the Bobcats effective at the end of next season.

When New Orleans decided to change its name to the Pelicans, the Hornets nickname became available, and the fans in Charlotte wholeheartedly supported switching back to the Hornets.

The league also announced that it will expand the use of instant replay by its referees as it pertains to block-charge calls, off-the-ball fouls and unsportsmanlike conduct.