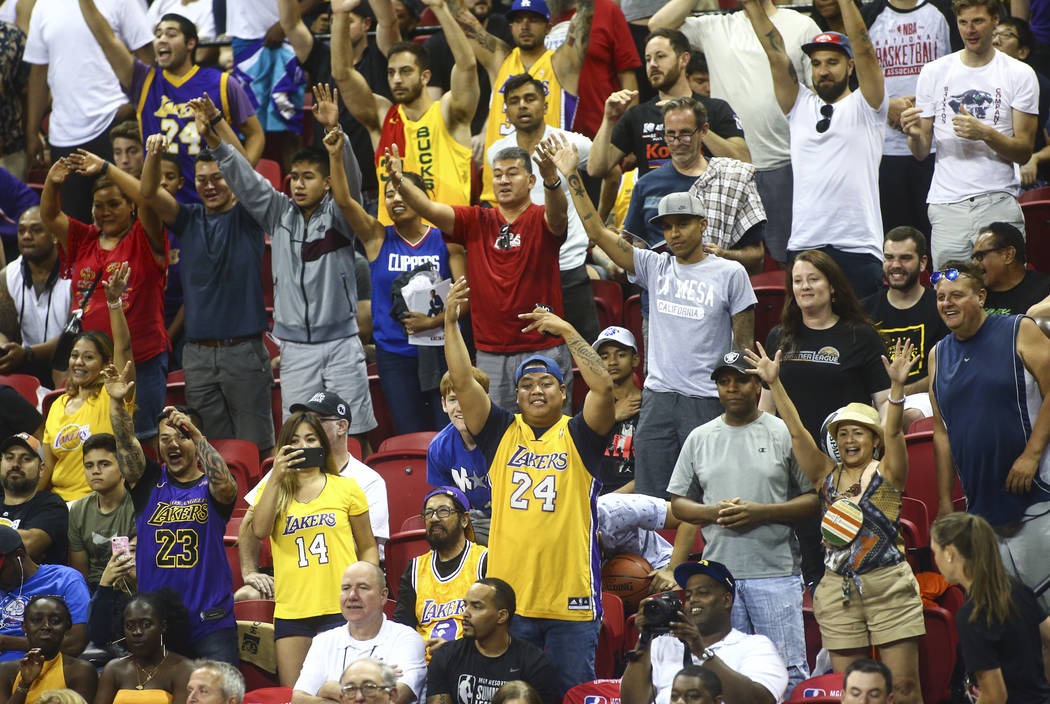 Basketball fans cheer for free items during a game between the Los Angeles Lakers and the Los Angeles Clippers at the Vegas Summer League at the Thomas & Mack Center in Las Vegas on Saturday, July 6, 2019. (Chase Stevens/Las Vegas Review-Journal) @csstevensphoto

Wrapping up the third day of the Vegas Summer League at the Thomas &Mack Center and Cox Pavilion:

■ Heat 93, Jazz 81 — Kendrick Nunn scored a game-high 22 points to lead Miami and Duncan Robinson had 20 points and 10 rebounds. Willie Reed had 14 points and 12 rebounds for Utah.

■ Trail Blazers 97, Rockets 87 — Gary Trent Jr. had 31 points on 10-for-12 shooting to go with six rebounds and five assists for Portland. Isaiah Hartenstein scored 22 for Houston.

■ Grizzlies 87, Clippers 75 — Brandon Clarke, the No. 21 pick in this year’s draft, made 7 of 11 shots and scored 17 points to lead Memphis. Grayson Allen also scored 17 points. Clippers No. 27 selection Mfiondu Kabengele had 19 points.

Star of the day

Gary Trent Jr. almost couldn’t miss for the Portland Trail Blazers. Not only did he go 10-for-12 overall, Trent was 7 of 8 from 3-point range in the victory over the Houston Rockets.

Gov. Steve Sisolak and NBA commissioner Adam Silver sat next to each other at the Thomas &Mack Center. … The No. 1 pick in 2017, Markelle Fultz, was at Cox Pavilion watching his Orlando Magic. … Last year’s top pick, Phoenix’s Deandre Ayton, saw his Suns play the New York Knicks at the Thomas &Mack. … New Utah guard Mike Conley Jr. watched the Jazz face the Miami Heat at Cox.