Editor’s note: Review-Journal sports reporter — and college basketball guru — Adam Hill chronicles the What If Tournament that he began with his Selection Sunday unveiling of the 68 teams. Monday: results of the second half of the Elite Eight.

After the wildest finish of the season, Villanova is headed to the Final Four of the Review-Journal’s What If Tournament.

Freshman Justin Moore provided the heroics with two 3-pointers in the final 10 seconds as the third-seeded Wildcats knocked off No. 1 Baylor 83-82 to win the South Region.

Moore hit the first of his 3-pointers from 28 feet to tie the game 80-80 with 9.8 seconds to play after Baylor’s Jared Butler made 1 of 2 from the free-throw line with 17 seconds left.

The Bears, who won the regular-season meeting in November, thought they had won the region final when Butler took the inbounds pass and went the length of the floor for a short jumper off the glass with 2.3 seconds left.

The celebration was short-lived.

Villanova coach Jay Wright elected not to call timeout, allowing Saddiq Bey to quickly throw the ball in to Collin Gillespie, who immediately passed it to Moore, who got off a heave from 35 feet just before the buzzer.

Moore’s shot capped a 22-point effort in which he went 5-for-7 on 3-pointers. The Wildcats made 15 of 32 3-pointers. Gillespie added 20 points and six assists.

Butler scored 23 points for the Bears. MaCio Teague made all eight free throws and finished with 20 points, six rebounds and three steals.

Completing the Final Four in our hypothetical tournament:

■(4) Oregon 76, (11) Richmond 66 — Payton Pritchard, one of the biggest stars of the tournament through three games, deferred to his teammates in the Ducks’ win.

Former UNLV forward Shakur Juiston picked up the slack with 21 points on 9-for-13 shooting, with eight rebounds and three blocked shots.

The Spiders cut a 15-point lead to two with 8:13 left before Juiston scored five consecutive points to put Oregon ahead 62-55. Richmond never got closer than six points after that. 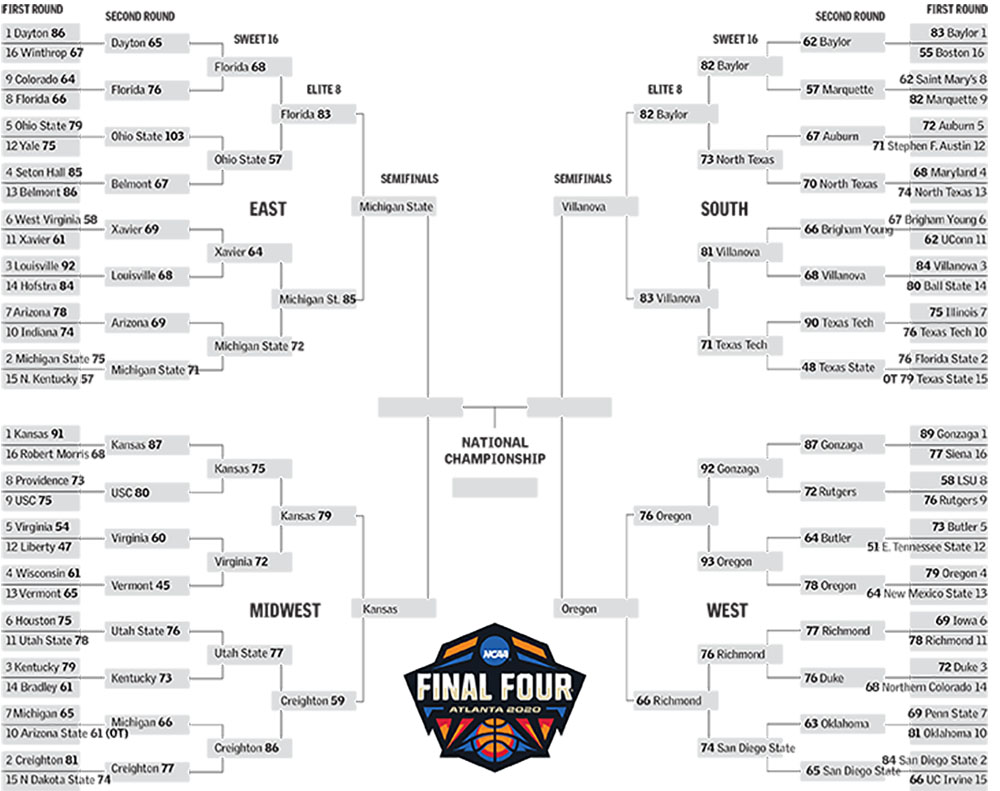