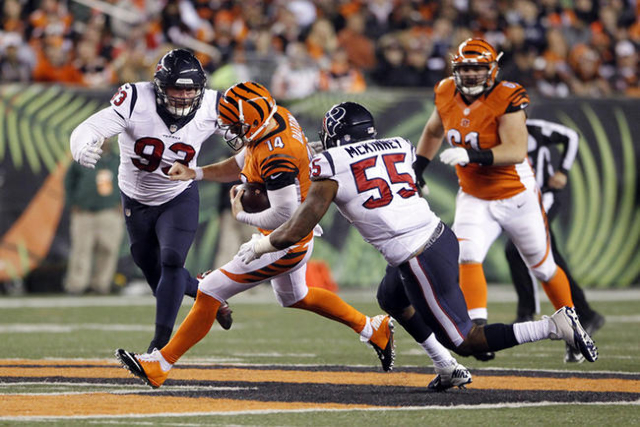 “Our goal was to come out here and make the Red Rifle look like a Red Ryder BB gun, and I think we did that tonight,” Watt told ESPN’s Lisa Salters in a postgame interview. “He’s a great player and they’re a great team, but tonight our coaches put together a great game plan, we executed the game plan, everybody did their job.”

Dalton, who didn’t throw a touchdown pass in a game for the first time since December, wasn’t in a joking mood when he was apprised of Watt’s remark following the Bengals’ (8-1) first loss of the season.

“I’m disappointed in him because of the integrity of this game,” Dalton said. “I have a lot of respect for him. He’s a really good player. There are a lot of kids and a lot of people who look up to him, and for him to make comments like that, he’s showing that’s acceptable to do that kind of stuff.

Dalton should just be grateful he didn’t shoot his eye out.

Watt was on a roll in his on-field interview with Salters, who got an amusing answer when she asked him why he missed a few plays late in the game.

“I got banged up in an area that I don’t think we can talk about on ESPN,” Watt said. “It took me out for two plays and we came back out and won the game, so I’m fine.”