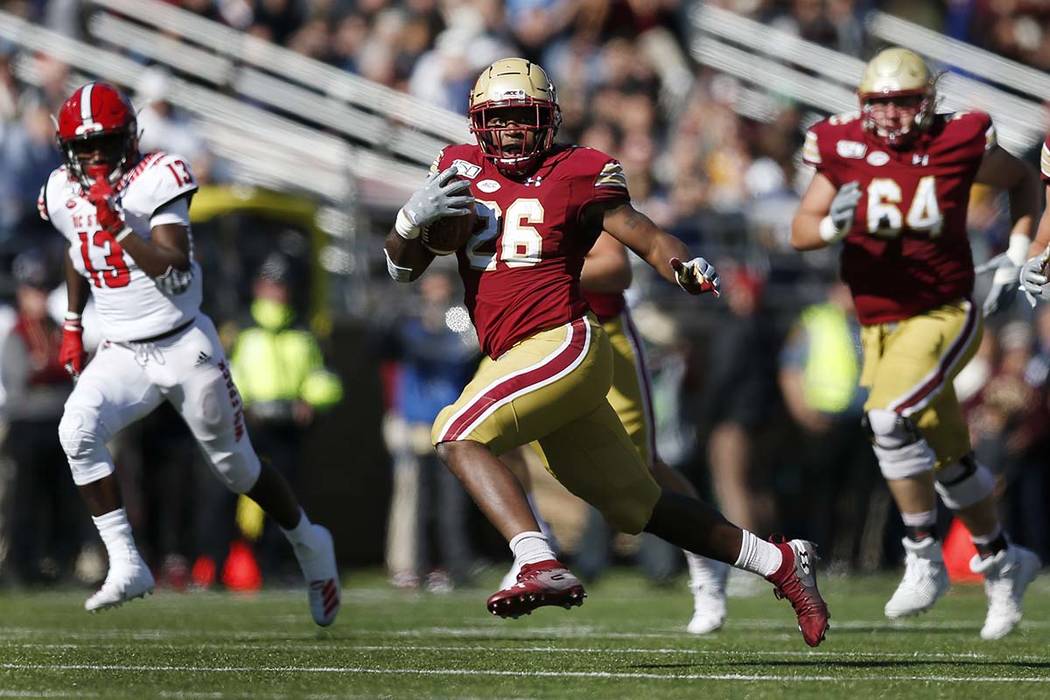 Boston College running back David Bailey (26) carries the ball against North Carolina State during the first half of an NCAA college football game in Boston, Saturday, Oct. 19, 2019. (AP Photo/Michael Dwyer)

Indiana at Nebraska (-2½): The Cornhuskers are 0-4 ATS in league games this season after covering their final seven conference games last season. Nebraska is 1-6 ATS this season. The Hoosiers are 3-0 as road underdogs since last season. Edge: Indiana.

Missouri (-10½) at Kentucky: Missouri is on an 18-9 spread run in regular-season games. Kentucky is 5-12 ATS at home since 2017. The road team has covered in the last three meetings. Edge: Missouri.

Texas (-1½) at Texas Christian: Texas has covered its last four road games. TCU is 3-7 ATS in its last 10 home games. TCU coach Gary Patterson is 4-5 in his last nine games as an underdog. Edge: Texas.

Miami at Pittsburgh (-5½): The Hurricanes are 1-7 ATS in conference road games. The Panthers are 7-3-1 ATS in their last 11 home games. The home team has won and covered in the last three meetings. Edge: Pittsburgh.

Virginia (-3½) at Louisville: Coach Scott Satterfield is 17-6-1 ATS since late 2017 with Appalachian State and Louisville. The home team has covered the last three meetings. Edge: Louisville.