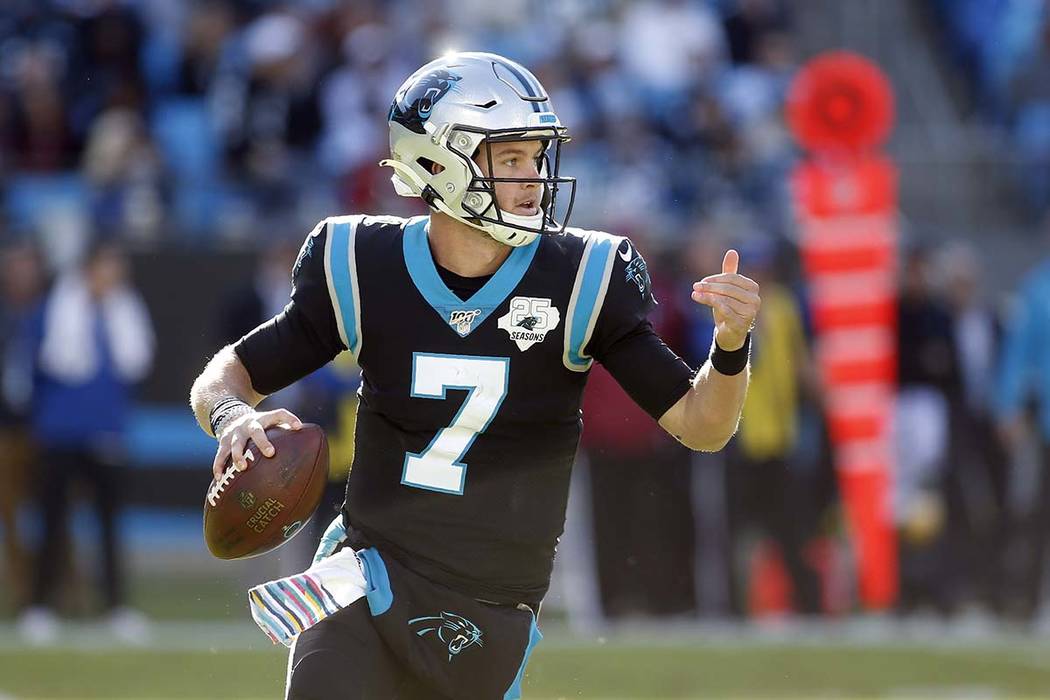 Carolina Panthers quarterback Kyle Allen (7) looks to pass against the Tennessee Titans during the second half of an NFL football game in Charlotte, N.C., Sunday, Nov. 3, 2019. (AP Photo/Brian Blanco)

Analysis: Kansas City QB Patrick Mahomes appears ready to go after missing more than two weeks with a dislocated kneecap. The Titans have gone 2-2 since turning to Ryan Tannehill at QB but are averaging 17.4 points during that stretch.

By the numbers: The Chiefs are 3-1 ATS on the road this season with the average win coming by 18.7 points. … Tennessee is 2-2 ATS at home.

Analysis: The Browns have lost four straight since winning at Baltimore on Sept. 29, but the combined records of those four opponents is 26-9. Only Denver (3-6) has a losing record. The Bills have been opposite the Browns in scheduling luck having their six wins come against teams with a combined 9-42.

By the numbers: Buffalo is 3-0 ATS in the underdog role. … The Browns have not been a home favorite since losing 43-13 to the Titans in Week 1.

Analysis: After winning three straight the Cardinals came back to reality with back-to-back losses to the Saints and 49ers. Tampa Bay QB Jameis Winston played one of his best game of the season in the overtime loss to Seattle last week.

Analysis: A battle of rookie QBs in Daniel Jones and Sam Darnold and two star RBs in Saquon Barkley and LeVeon Bell. Also, two terrible offenses, with the Giants averaging 19.6 points and the Jets 12.0.

By the numbers: The Giants and Jets are a combined 3-15 straight up and almost as bad against the spread at 5-12. … The Giants are 1-4 ATS in their last five, while the Jets have failed to cover their last three.

Analysis: The Falcons had high hopes for this season but instead find themselves in the running for a top draft pick. New Orleans continued to win even with future Hall of Famer Drew Brees injured and Teddy Bridgewater filling in at QB.

By the numbers: Atlanta has lost six in a row straight up and is 2-6 ATS. … New Orleans has won six straight covering all six in that span.

Analysis: Typically coming off a big prime-time win against the Patriots would be a letdown spot for Baltimore. But the winless Bengals are possibly the worst team in the league and head coach Zac Taylor appears incapable.

By the numbers: This marks the third time the Ravens will be double-digit favorites but the first time on the road. They are 0-2 with the average ATS loss coming by 5.8 points. … The Bengals are 0-3 ATS at home this season with the average straight up loss by 12.3 points.

Analysis: The Panthers are 5-1 since Kyle Allen took over for Cam Newton at QB, but now they have to go into the cold at Lambeau Field to take on the Packers, who are coming off a tough road loss to the Chargers.

By the numbers: The Panthers have covered the spread in each game in which they won with Kyle Allen at QB. … Green Bay leads the NFC North in both the standings and ATS wins (6-3).

Analysis: The Lions have been a bit of a surprise and could easily be 7-1 if a few breaks went their way. The Bears, on the other hand, have been a big disappointment with QB Mitch Trubisky playing terrible and averaging 180.4 passing yards.

By the numbers: Detroit is 4-4 ATS overall and 2-2 ATS on the road this season. … The Bears have not covered a game in more than a month. The last Chicago ATS win came Sept. 29 against Minnesota, the only home cover of the season for the Bears.

Analysis: Miami finally got in the win column last week against the Jets, but was the win a loss for the franchise’s future? While the Dolphins are clearly in rebuilding mode, the Colts are in the middle of a playoff race despite their franchise QB retiring a couple weeks before the season started.

Analysis: Los Angeles hasn’t been the same offensive team we saw go to the Super Bowl last season. The Rams are averaging 26.8 points compared to 30.8 last season. After starting 0-3, the Steelers have won four of five to get back to .500 and back in the AFC wild-card race.

By the numbers: The Rams are 2-1 ATS when laying more than a field goal this season, each win has covered by 2½ points. … The Steelers are 3-1-1 ATS in their last five games.

Analysis: When the Cowboys are going well, they are a really good football team. When they don’t play well, they lose to the Jets. The Vikings are 2-3 on the road this season with wins over the Giants and Lions.

By the numbers: Vikings WR Adam Thielen has been ruled out and has only seen three targets in his last two games because of injury. Thielen averaged 6.3 targets his first six games. … The Cowboys are allowing an average of 220.9 passing yards.

Analysis: The top two teams in the NFC West face off as the 49ers look to stay undefeated. Seattle QB Russell Wilson has worked his way into the MVP discussion by throwing for 22 touchdowns with only one interception. Wilson and the Seahawks will have to crack a 49ers defense that is only allowing 241 total yards per game, best in the league.

By the numbers: In the Seahawks’ two losses they allowed seven defensive or special teams touchdowns. In their seven wins, they allowed zero. … The 49ers are 2-1 ATS at home this season.