If you are having problems accessing today’s e-Edition, please click on this link VIEW E-EDITION
By Scott Kellen Special to the Review-Journal
October 12, 2019 - 6:38 pm 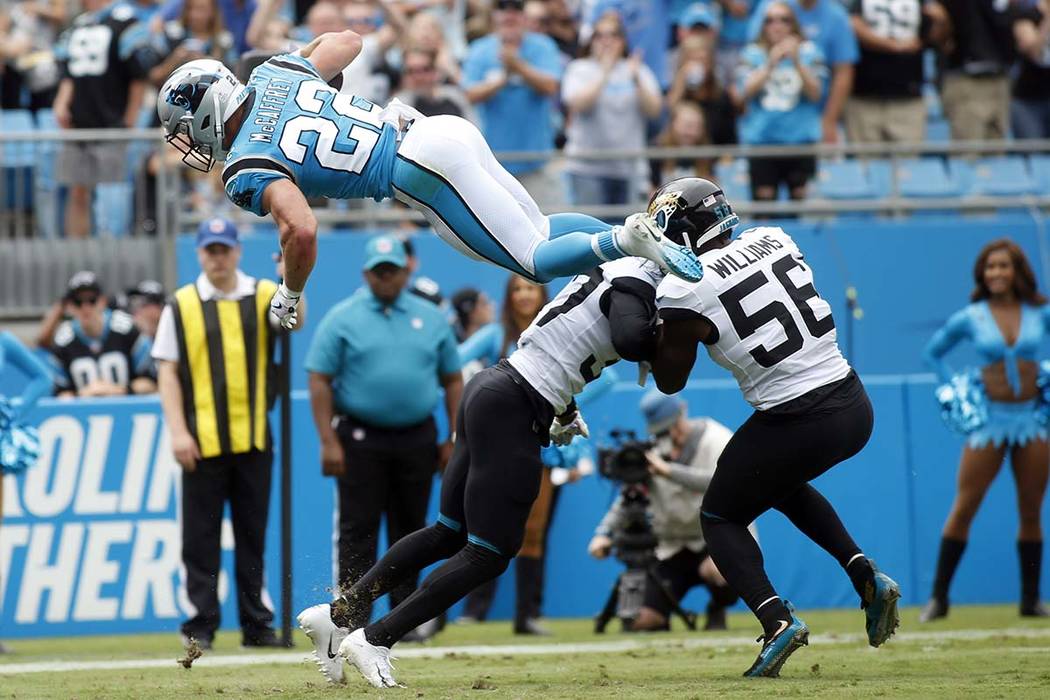 Analysis: Carolina scored 34 points last week, but seven came on a returned fumble for a touchdown, another seven after a fumble they recovered at the Jacksonville 18, and the Panthers scored on runs of 84 and 59 yards. Both teams defend what the other team does well. Both are dealing with injuries to their offensive lines.

Analysis: Cincinnati already has allowed San Francisco to rush for 259 yards and last week Arizona rushed for 266 yards against the Bengals. They’ve also allowed Buffalo to rush for 175 yards. Now they get the Ravens, who are averaging 192 rushing yards. This Baltimore defense is nothing to write home about, but the question is can a Cincinnati offense missing its top two receivers and with a horrible offensive line take advantage of a poor Ravens defense.

Analysis: This is a bad scheduling spot for Cleveland coming off a Monday night loss at San Francisco, while Seattle gets extra rest after its home win over the Rams on Oct. 3. Seattle is missing tackle Duane Brown and guard D.J. Fluker on the offensive line. The Seahawks face a Browns pass rush that has been decent. Cleveland is taking too many sacks, but Seattle is not getting to the quarterback. The Browns could get back cornerbacks Denzel Ward and Greedy Williams, who have missed the last three weeks.

By the numbers: The under is 16-5 in Cleveland’s last 21 games as a home underdog.

Analysis: The Chiefs are banged up and will be without left tackle Eric Fisher, guard Andrew Wylie and defensive tackle Chris Jones. Wide receiver Sammy Watkins is doubtful.

By the numbers: Texans QB Deshaun Watson is 7-1-1 ATS as a road underdog. … The Chiefs are 1-4 ATS as home favorites the last two seasons against teams that made the playoffs

Analysis: Saints QB Teddy Bridgewater is 3-0 straight up and ATS filling in for Drew Brees. Jacksonville QB Gardner Minshew is 3-1 ATS filling in for Nick Foles. But the Saints are coming off two home games and had allowed more than 8 yards per pass in their two previous road games.

By the numbers: Jacksonville has allowed more than 20 points once in its last nine games as a home favorite.

Analysis: Philadelphia’s secondary is banged up with Ronald Darby and Avonte Maddox out. Wide receiver DeSean Jackson also is still out. Since coach Doug Pederson took over in 2016, Philadelphia has allowed at least 23 points in 12 of 13 games as a road underdog. The over is 9-2-2 in those 13 games. The Eagles had allowed at least 24 points in each game this season before last week’s 31-6 win over the Jets.

By the numbers: Minnesota coach Mike Zimmer is 18-3 ATS as a home favorite against a nondivision opponent.

Analysis: Washington finally gets a game it can win. The Dolphins are coming off their bye week and get extra time to prepare for the Redskins and interim coach Bill Callahan.

By the numbers: Teams with winless records who are underdogs coming off their bye week in game four or later are 27-9-1 ATS. … Nondivision teams from Weeks 3 through Week 6 with a total of 43 or less are 148-87-3 over the total.

Analysis: The 49ers are coming off short week after a Monday night game and injuries are piling up. They are without starting fullback Kyle Juszczyk, right tackle Mike McGlinchey, left tackle Joe Staley and cornerback Ahkello Witherspoon. The Rams are coming off back-to-back losses and have had extra time to prepare.

By the numbers: QB Jimmy Garoppolo is 10-2 straight up as a starter for the 49ers.

Analysis: Both teams are below average defending the pass, and neither team sacks the quarterback well. Atlanta will be without cornerbacks Desmond Trufant and Blidi Wreh-Wilson. This is a step down in class for Atlanta.

Analysis: Sam Darnold returns to quarterback the Jets. The Jets are giving up too many sacks, but was that the offensive line’s fault or the quarterback holding the ball too long? The Dallas offense is better than ever this season, but the defense has taken a step back.

By the numbers: The over was 4-0 last season when Sam Darnold started as a home underdog.

Analysis: Tennessee is ready to ground and pound the Broncos. Jacksonville ran for 269 yards two weeks ago at Denver.

By the numbers: The Chargers are 5-10-1 ATS as home favorites since moving from San Diego to Carson, California.

Analysis: Both teams are likely to try to establish the run, as both give up an average of at least 125 yards on the ground. Green Bay will be without wide receiver Davante Adams.

By the numbers: The under is 17-10-1 when Green Bay is a home favorite with QB Aaron Rodgers starting. … The Packers are 16-5 ATS as a home favorite of less than seven points since 2010. … Lions QB Matthew Stafford is 12-40 ATS against teams that made the playoffs in the year they played the Lions.